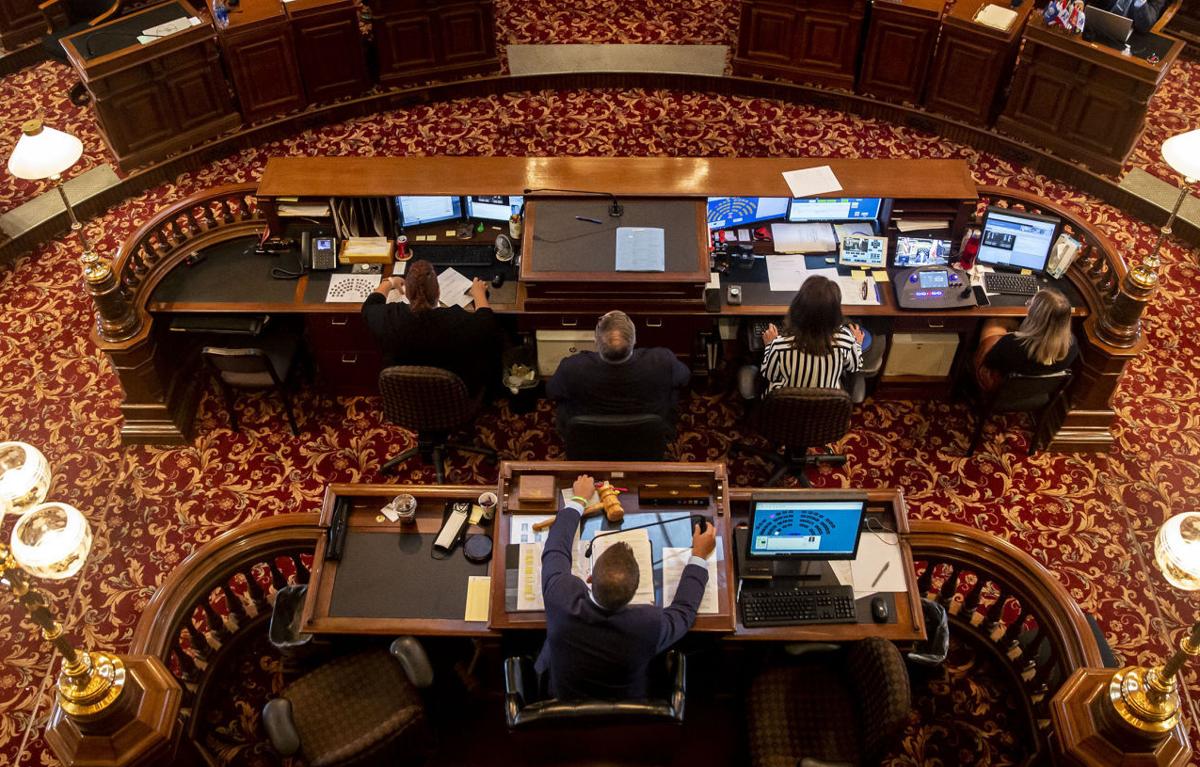 The Iowa Senate holds a special session to vote on congressional and legislative redistricting maps, Tuesday at the Iowa State Capitol in Des Moines. 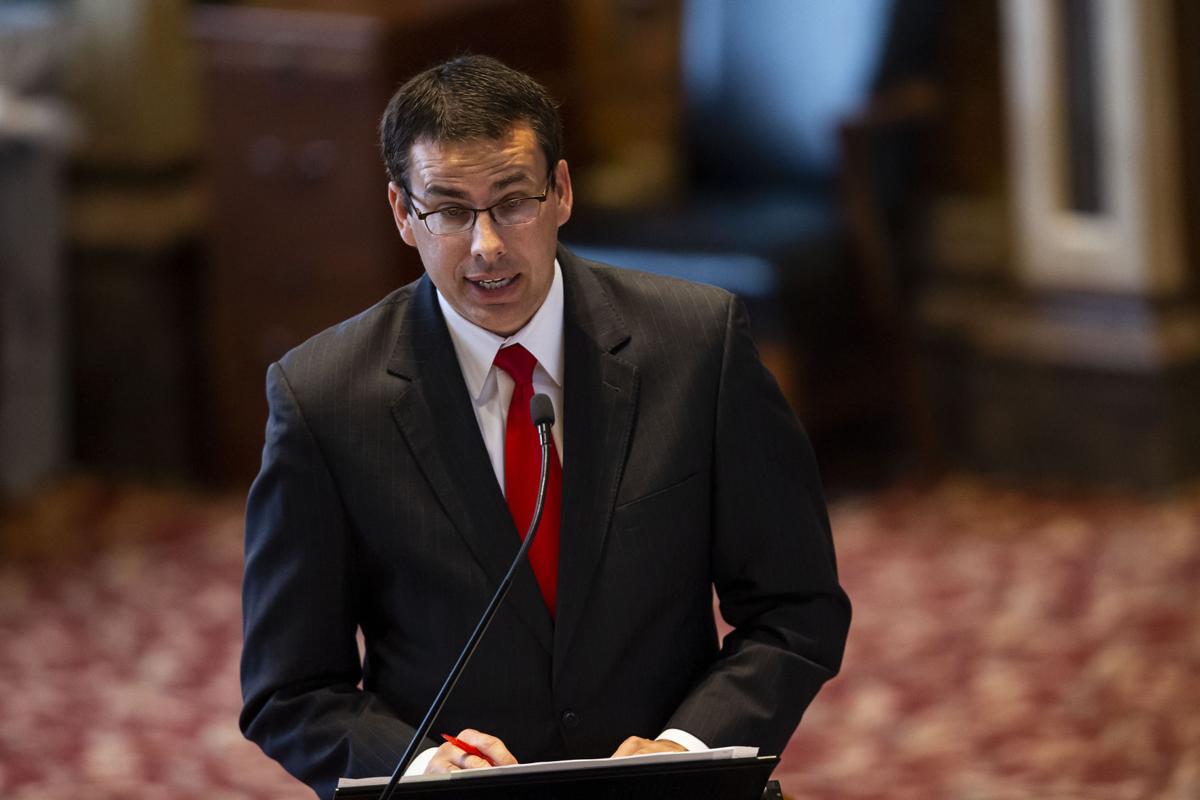 State Sen. Roby Smith, R-Davenport, speaks in the Iowa Senate during a special session on congressional and legislative redistricting maps, Oct. 5 at the Iowa State Capitol in Des Moines. 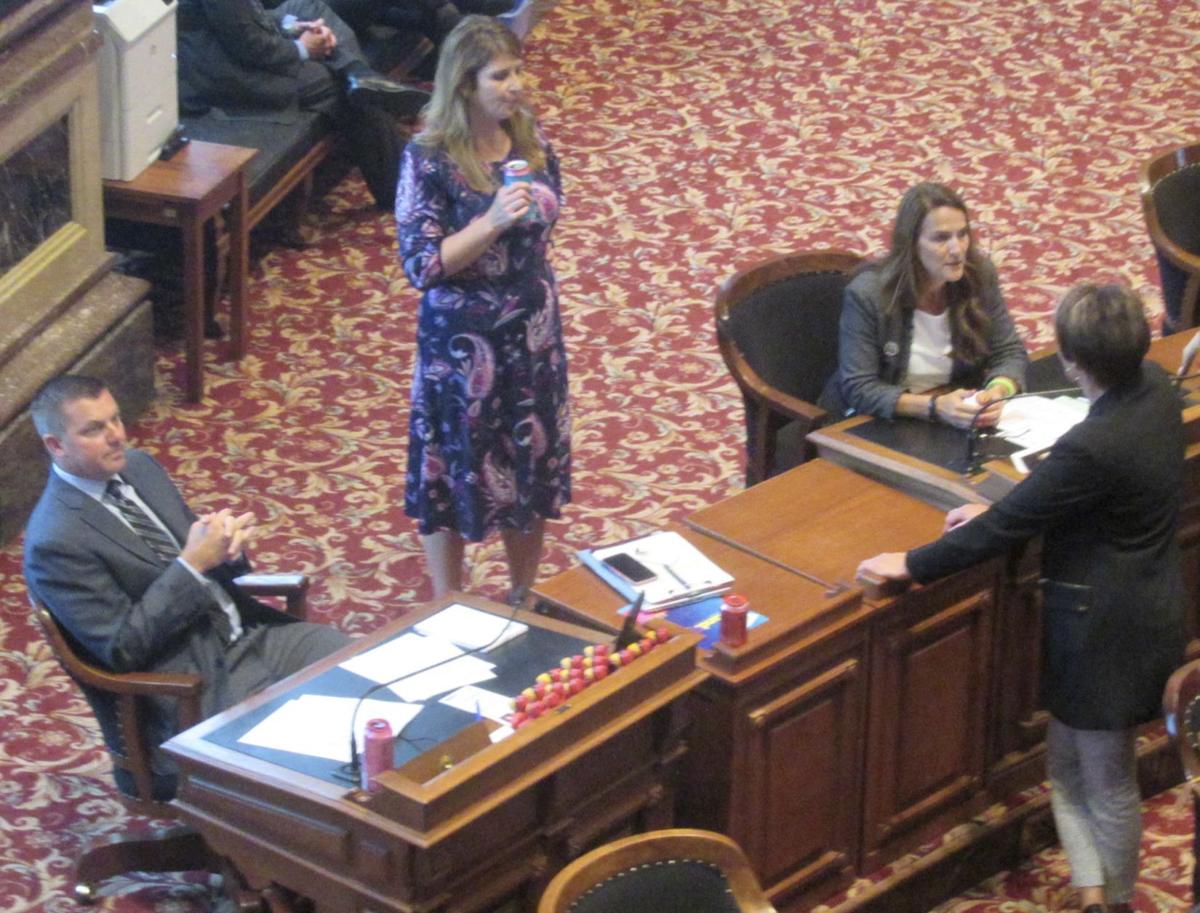 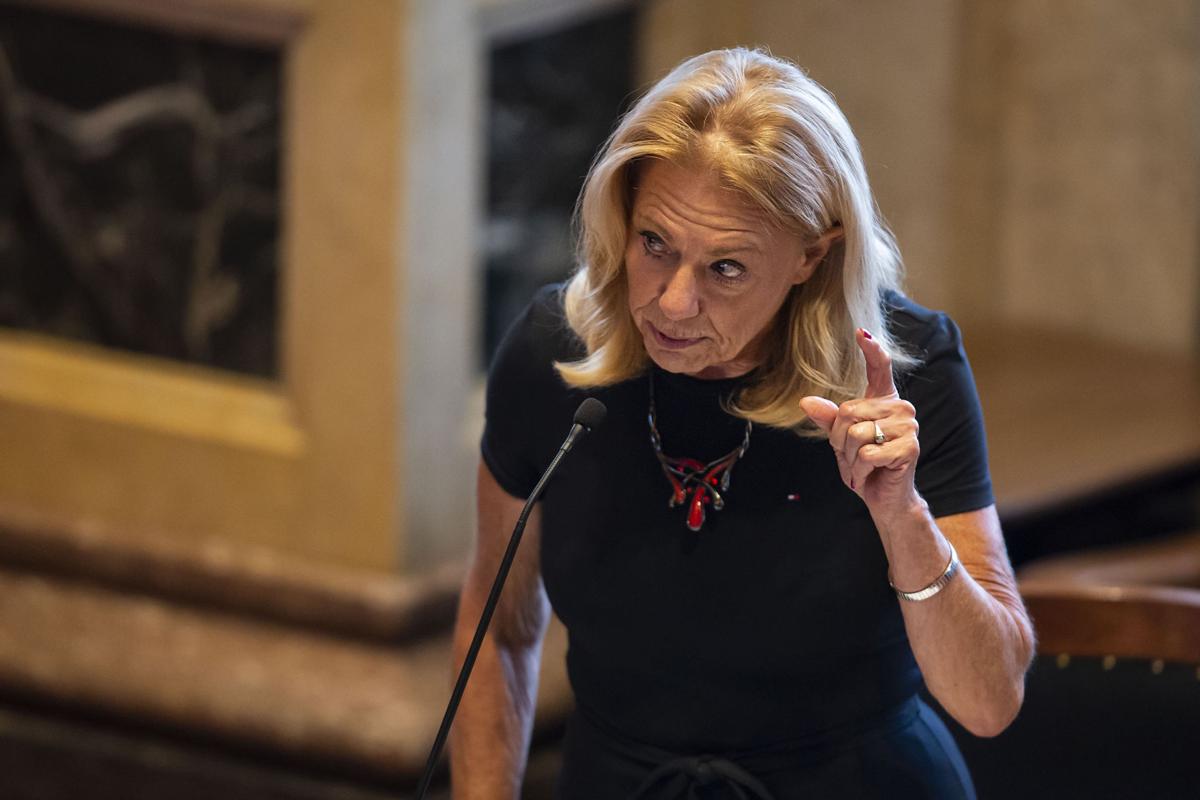 State Sen. Pam Jochum, D-Dubuque, speaks in the Iowa Senate during a special session on congressional and legislative redistricting maps, Tuesday at the Iowa State Capitol in Des Moines. 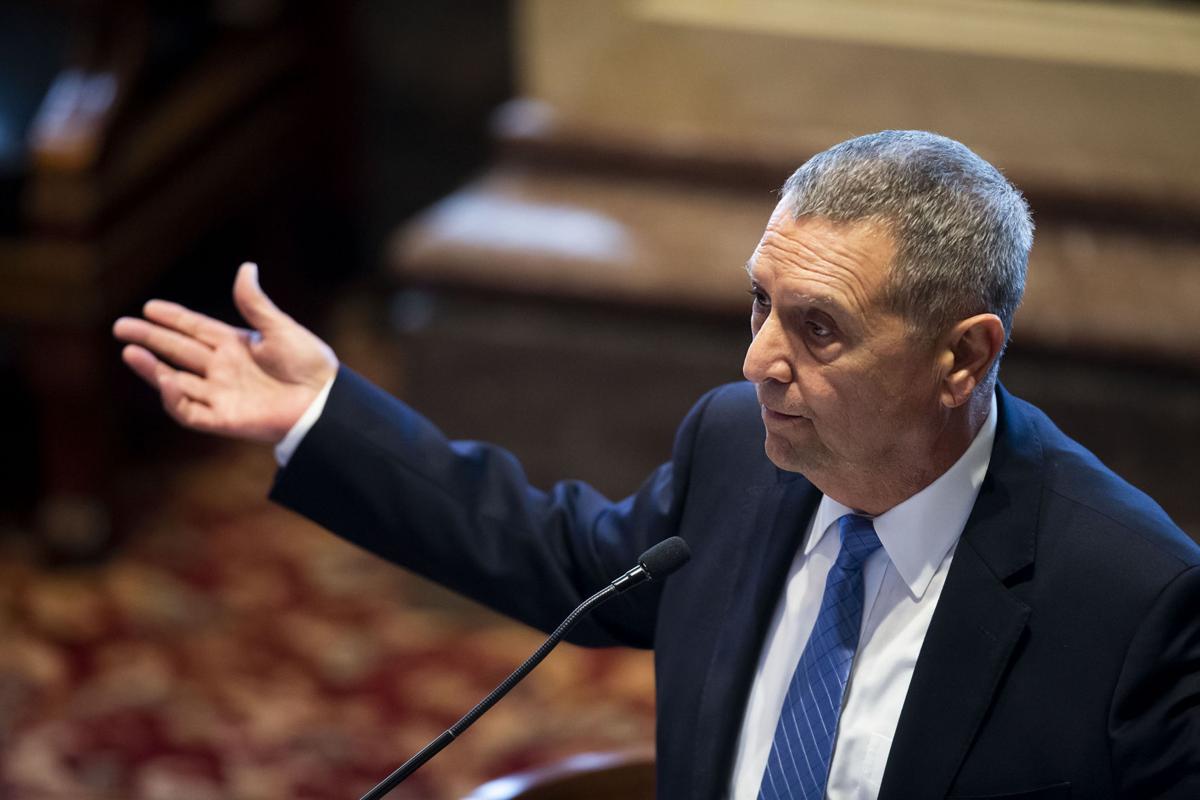 State Sen. Tony Bisignano, D-Des Moines, speaks in the Iowa Senate during a special session on congressional and legislative redistricting maps, Tuesday at the Iowa State Capitol in Des Moines. 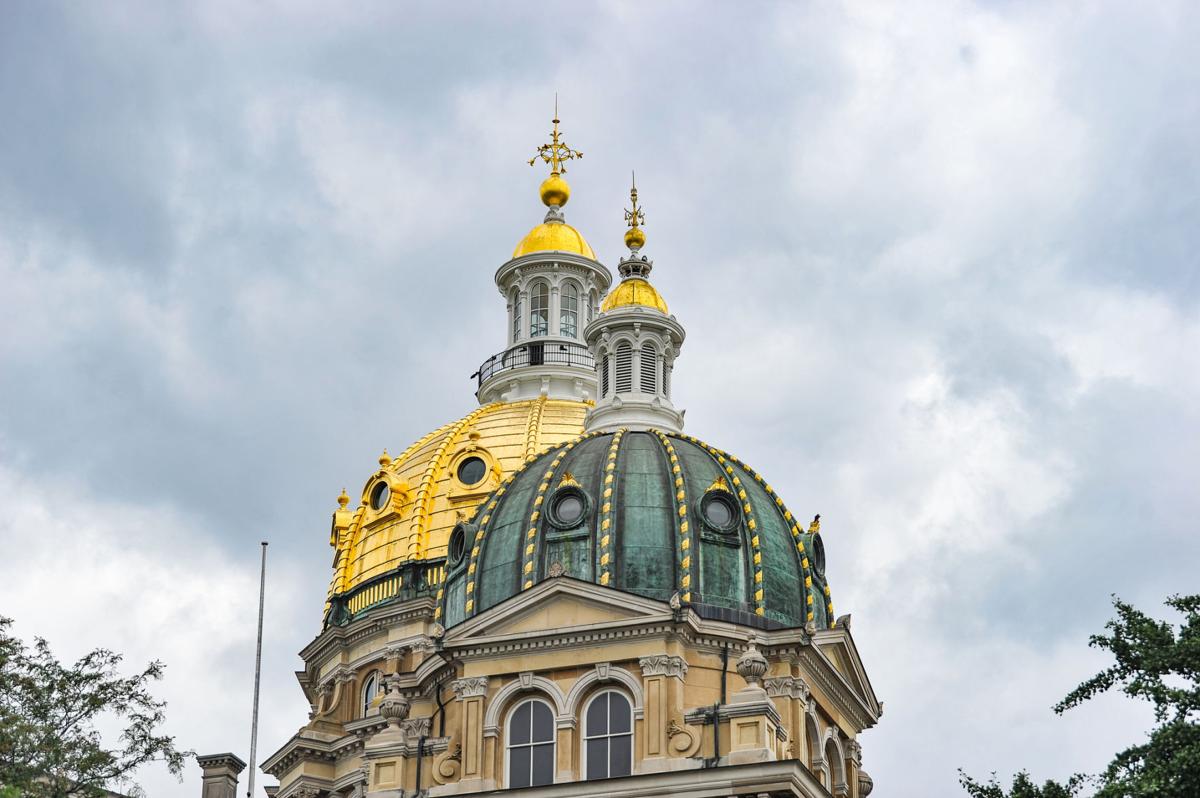 DES MOINES — A plan that would have thrown more than 60 incumbent legislators into election districts with at least one other lawmaker and dramatically changed the state’s four congressional districts was rejected Tuesday by the Republican majority in the Iowa Senate.

Senate File 620, a proposal bases on the latest census to redraw legislative and congressional election boundaries for the next 10 years, was voted down on an 32-18 party line vote after State Government Committee Chairman Roby Smith, R-Davenport, told colleagues there were “clear indications that Plan 1 can be improved by a second iteration.”

However, Sen. Pam Jochum, D-Dubuque, who has been through the redistricting process two previous times, said the plan was more than fair.

“It's independent,” she said. “It does not give an advantage of one party over the other. Nor should it. Nor does it take into account where any of us live. Nor should it.”

Since 1981, Iowa has used a nonpartisan redistricting process that is considered a model because it eliminates gerrymandering, a process politicians and political parties use to draw districts to their benefit.

In Iowa, the proposed maps are drawn by the nonpartisan Legislative Services Agency’s legal and data analysts. The boundaries are supposed to be drawn without consideration of political ramifications, such as how new district lines will affect individual lawmakers’ re-election chances or the balance of power.

More than 250 Iowans commented on the proposal during public hearings. Not all of them liked the plan, but the consensus was that Iowa’s nonpartisan process is the “gold standard,” Jochum said.

“Fair, independent maps give people the power of their voice at the ballot box,” Jochum said.

State law calls for the maps to be drawn, as much as possible, in square, rectangular or hexagonal shapes so as to avoid irregular-shaped districts. Smith pointed out a triangular district, a pyramid and one “so irregular it looks like the 1800s salamander known for gerrymandering.”

Eighteen districts were within 100 people of exceeding or failing to meet the ideal population by 1% — the deviation allowed by law, Smith said.

“These deviations along with compactness should improve to better meet the standards as required under the state constitution and statute,” Smith said. “Voting down the first plan does not violate the ‘gold standard,’ rather the process in Chapter 42 provides clear directions on multiple iterations of a redistricting plan.”

“This is a clear signal Republicans are willing to use a partisan gerrymander to keep themselves in power, regardless of the will of we the people,” Wahls said. “Now is the time for Iowans to make their voices heard, contact their legislators, and demand that Republicans stop going down their dangerous road.”

The Republican vote to reject SF 620 should not be seen as an attack on the redistricting process, said Senate Majority Leader Jack Whitver, R-Ankeny.

“We have a great redistricting process in Iowa. It’s looked at as one of the best in the country,” he said. Republicans are following the state law “and part of that process is an up-or-down vote on Map 1. We chose to vote it down and move on to Map 2. That's just part of the process.”

With the defeat in the Senate, the House did not take up the redistricting plan. However, House Speaker Pat Grassley, R-New Hartford, agreed with GOP senators that the objections were not unwarranted.

Rejecting the first plan is not unprecedented, Grassley said, a reference to the 2001 plan that — like the plan rejected Tuesday — would have created 60 incumbent-on-incumbent districts.

“Iowa House Republicans stand ready to do our due diligence to ensure the second set of maps is a fair map for the people of Iowa,” he said.

The process now returns to the agency to prepare a second map. Like the first, lawmakers will vote it up or down without amendment. If that is rejected, a third map will be prepared. If they choose, lawmakers can amend that one — essentially drawing their own map.

But time is not on their side. The state code and constitution call for the Legislature to complete redistricting by Sept. 15 or the Iowa Supreme Court finishes the job. Due to census delays across the nation, the agency received the needed population data in mid-August and delivered the first plan five weeks later. Now the agency has up to 35 days to submit a second plan and lawmakers will have to come back to vote on it.

Under legislative rules, state House and Senate members receive their regular daily expense money for the special session, which amounts to $175 for most lawmakers and $131.25 for those residing in Polk County.

The court has given lawmakers until Dec. 1 to complete the process. Leaders in both parties say it would be difficult to get to a third map before then.

“This is an uncharted territory,” Wahls said after the Senate adjourned. “We're obviously operating now under the authority of the Supreme Court because of the delays. Today was an opportunity to put to bed the uncertainty and I think the concern around this process that both sides share.”

Redistricting is a process of redrawing congressional and state legislative boundaries to reflect population changes found in the decennial census.

That resulted in larger rural districts. In some cases, there were two or three incumbents in a proposed district, which meant they could have faced one another in a 2022 primary or general election. The same situation occurred in some metro areas.

“The second map will have the same issues that this map has because that’s where Iowans live,” Konfrst predicted.

It’s not just rural areas that lose representation as the population shrinks there. U.S. House seats are apportioned on the basis of population. Iowa’s population has been growing for 30 years, but other states have grown faster, gaining a larger share of congressional seats. In 1910, both Iowa and California had 11 representatives in the U.S. House. Today California has 53. Iowa has had four since 2011.

How pumpkins became a part of Halloween

DES MOINES — With booster shots for all three COVID-19 vaccines all approved by federal regulators, the state’s public health department has i…

State legislators are scheduled to meet in Springfield on Tuesday and Wednesday to consider the maps, which are redrawn every decade based on census data. Illinois, which currently has 18 U.S. House members, will lose a congressional seat because of population loss.

Iowa Democratic legislative leaders say they have committed their members to voting for a second version of a plan, released Thursday, that wo…

Former Chicago Mayor Rahm Emanuel said Wednesday he did nothing improper but still fell short in his handling of the fatal police shooting of a Black teenager in the city seven years ago, a dark moment in his tenure looming large now as he hopes to win Senate confirmation as President Joe Biden’s ambassador to Japan.

Suburban police were asked to help Chicago during vaccine stalemate, but 3 sheriffs say no

"I don’t feel like the onus is on us to go in there in an emergency situation that was created by poor government and a lack of support the officers receive," said Kane County Sheriff Ron Hain.

Advertising has taken up the vast majority of the $8.2 million Pritzker's campaign has spent in the previous three months.

The Iowa Senate holds a special session to vote on congressional and legislative redistricting maps, Tuesday at the Iowa State Capitol in Des Moines.

State Sen. Roby Smith, R-Davenport, speaks in the Iowa Senate during a special session on congressional and legislative redistricting maps, Oct. 5 at the Iowa State Capitol in Des Moines.

State Sen. Pam Jochum, D-Dubuque, speaks in the Iowa Senate during a special session on congressional and legislative redistricting maps, Tuesday at the Iowa State Capitol in Des Moines.

State Sen. Tony Bisignano, D-Des Moines, speaks in the Iowa Senate during a special session on congressional and legislative redistricting maps, Tuesday at the Iowa State Capitol in Des Moines.