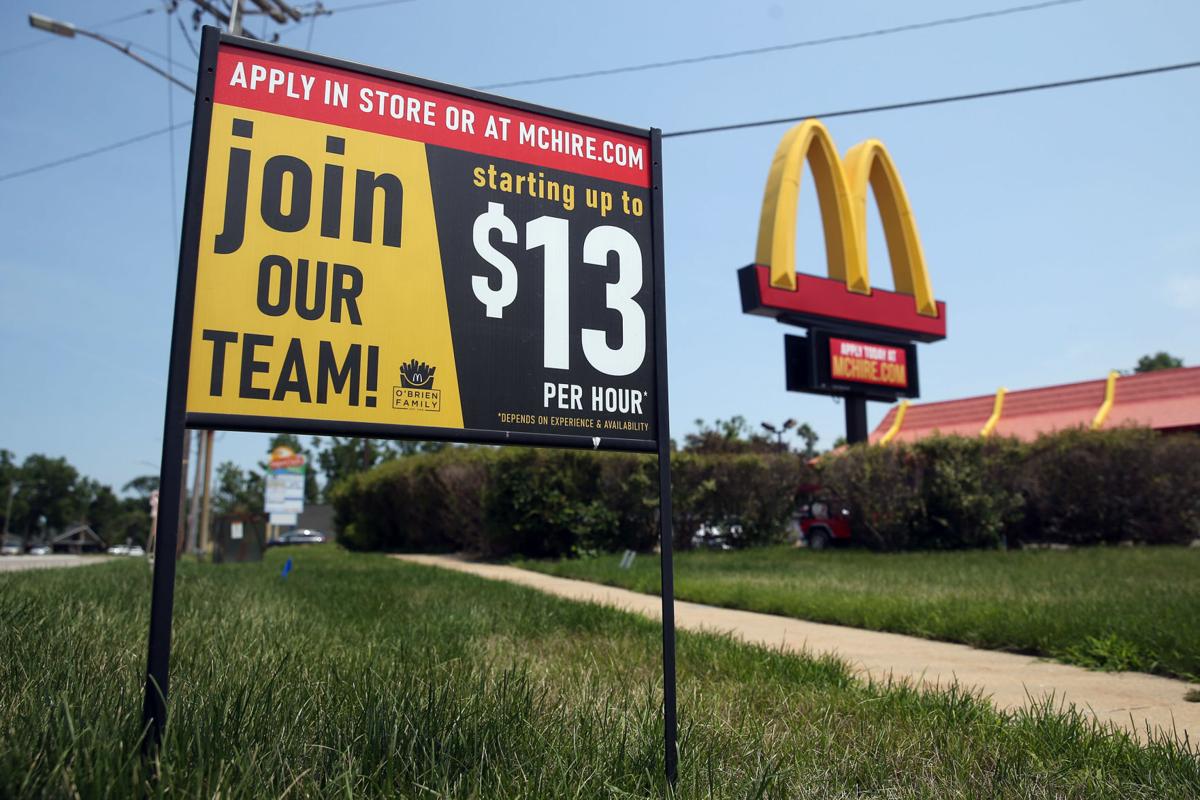 McDonald’s in Marion advertises hiring at up to $13 an hour on Friday. 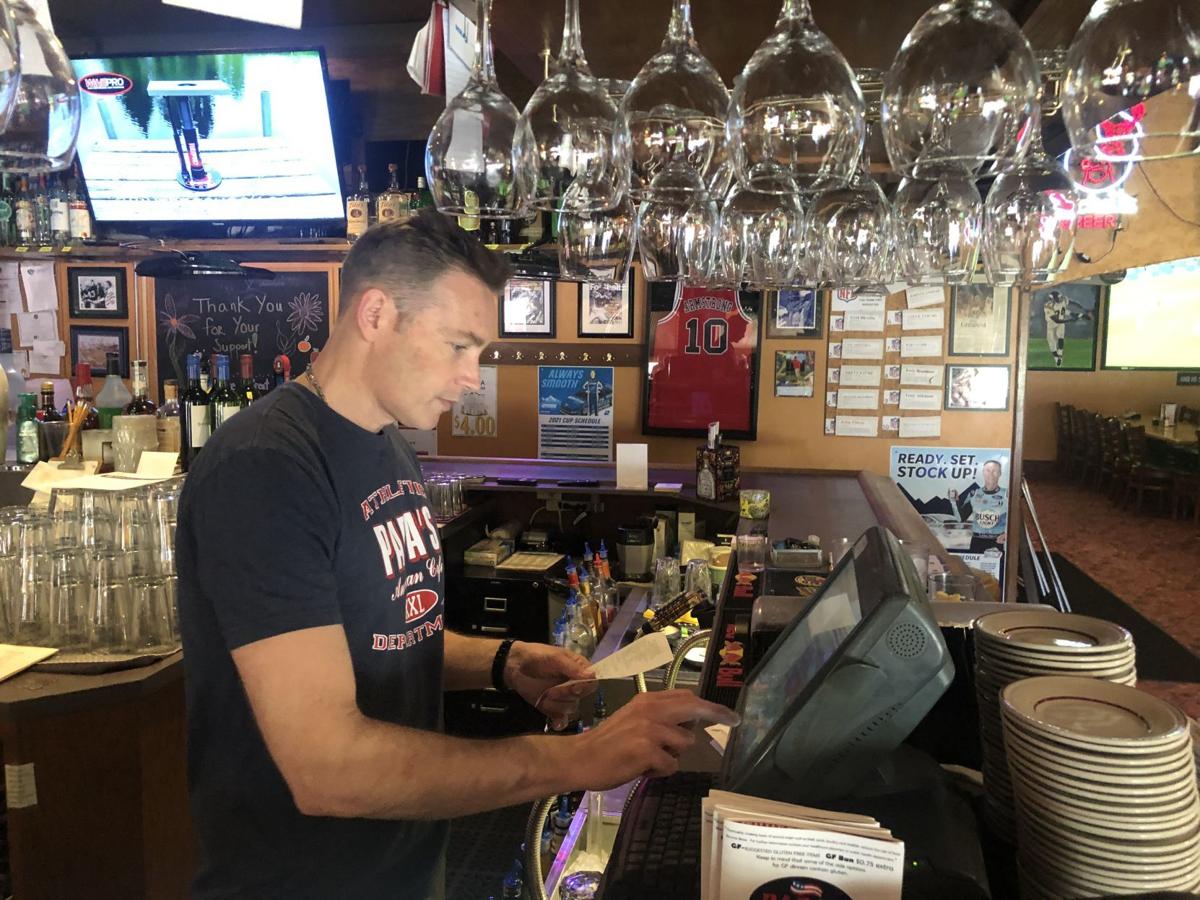 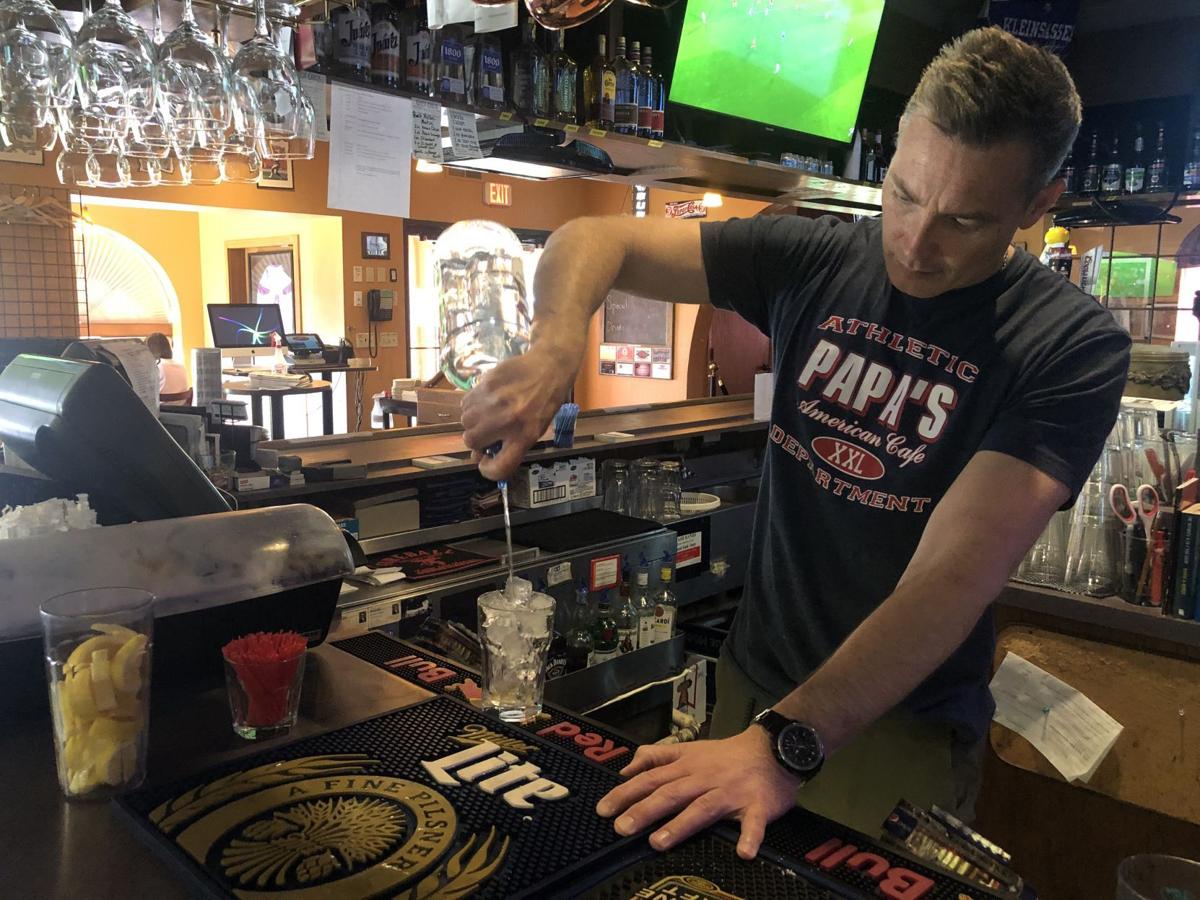 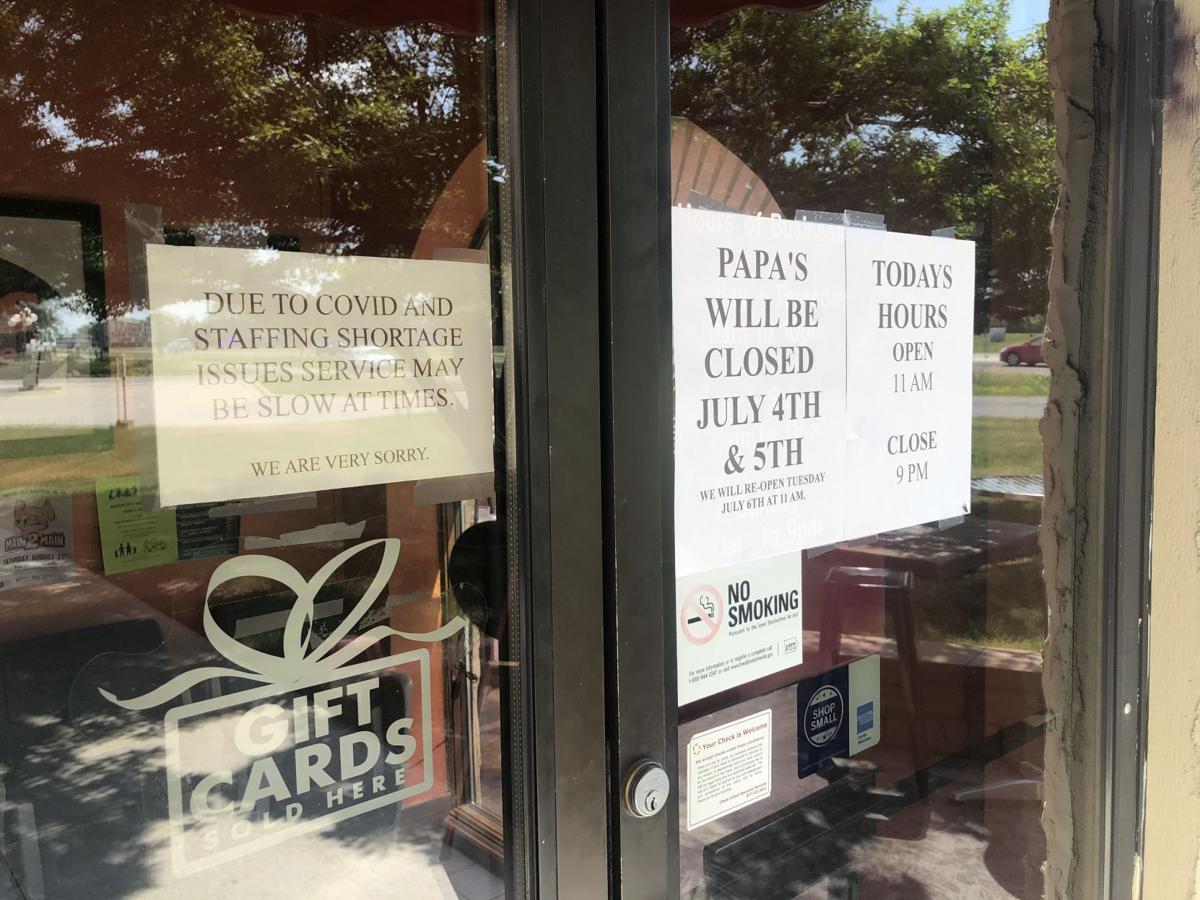 A sign notifies customers of Papa’s American Cafe’s staff shortage on the door outside. 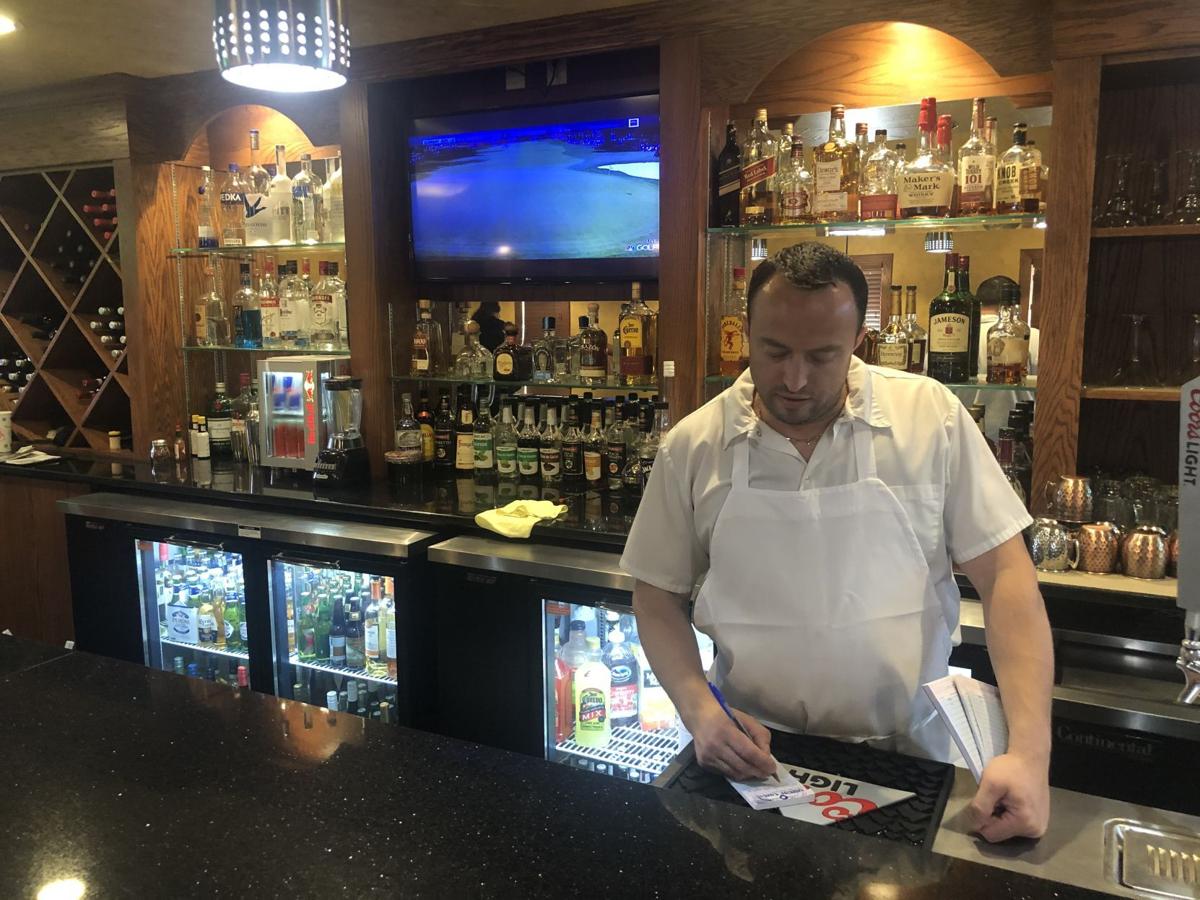 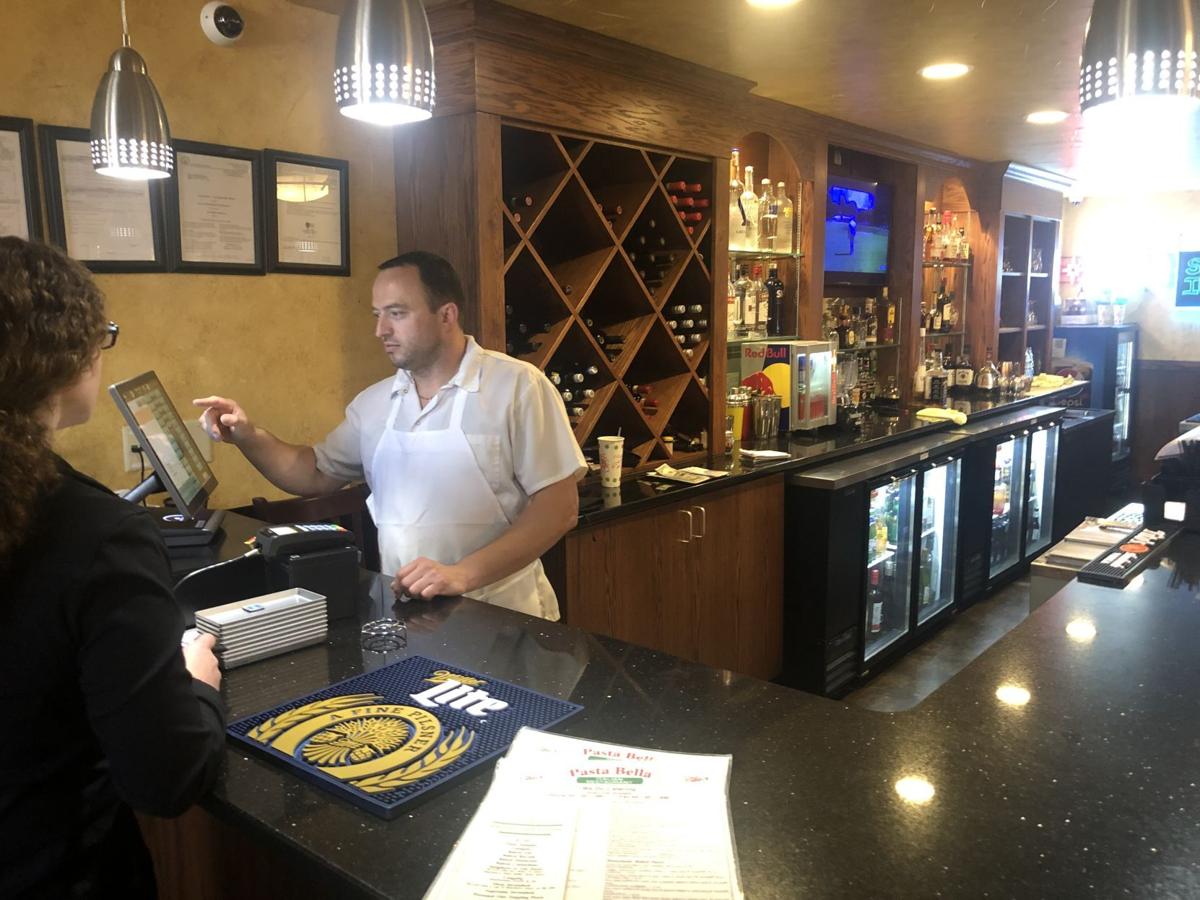 Pasta Bella co-owner Visar Kelmendi puts an order into the system with one of his wait staff.

Nine out of 10 Iowa restaurants are actively seeking more staff, and more than half are operating at least 20% below normal staffing levels, according to the latest survey data from the Iowa Restaurant Association.

That staffing shortage is hindering the post-pandemic recovery of Iowa restaurants, which were among the businesses hit hardest by COVID-19 closures and restrictions, according to the state association’s leader.

Restaurants of all types, from family to fast food, are feeling the pinch. A drive through any Iowa city’s business district provides visual confirmation, with many restaurants broadcasting their need for more workers on signs normally reserved for that day’s special.

Restaurant employment is rebounding from the pandemic, but the state’s most recent “accommodation and food service” employment numbers remain nearly 14% below pre-pandemic levels, according to state workforce development figures.

Dunker said a convergence of issues has led to staffing shortages across the industry, which came out of the pandemic reeling — Iowa restaurants lost nearly $1.5 billion due to pandemic mitigation strategies like business closures and restrictions, according to an analysis by the state association.

During the pandemic many workers, especially those with skills that translate to other professions, left the industry — probably for good, Dunker fears. And she said many of the industry’s part-time workers are women, many of whom have decided to stay home in part because of the high cost of child care.

Other factors include restaurants’ high share of teenage workers and a lack of teenagers willing to work, and restaurants’ typical summer expansion with outdoor seating, Dunker said.

“That is a recipe for difficulty. So we are really struggling to find workers,” she said.

Iowa State University economist Dave Swenson said he disagrees that restaurants' hiring struggles are attributable to a labor force unwilling to work. Numbers do not show, for instance, that unemployment is higher for teens now than before the pandemic.

For reasons that may not be fully understood for many months to come, however, Iowa's labor-force participation loss is double that of the rest of the country.

"We are a-typical from the nation," Swenson said. "I take great issue, however, with employers who impugn the Iowa workforce," especially with so many Iowans working more than one job.

While a clear understanding of the forces at work will come with time and data, not anecdotes, a study of impacted demographics has revealed some explanations for the staffing shortages, he said.

One of the hardest-hit employment demographics has been the under-24 age group, and those workers represent a large number of the dining and drinking staff. Many of them had not worked long enough to qualify for unemployment benefits when the pandemic hit, Swenson said, so they found work elsewhere when restaurants were forced to close.

"Unemployment was very high in that demographic," Swenson said. "They moved back home and/or found other jobs.

"They (restaurants) likely just lost those workers, because they moved on."

Another big loss in Iowa has been among the 45-to-54-year-old demographic. No one is sure why so many in that age group dropped out, but child-care costs are not likely a factor, he said.

"We don't have an explanation," Swenson said. "It doesn't make sense. They're not the mothers, though."

The other demographic with a labor-force decline was the over-60 set, he said. Many left their jobs for health reasons or for fear of health impacts during the pandemic or they took early retirement.

Regardless the age group, the result is the same, he said: "Restaurants are going to have to work extra hard to recruit people back into food service."

"The $9 and $10 an hour wages; those days just don't exist anymore. Others are fighting that. Some are closing instead, which doesn't make sense, because they are then making no money," he said.

"Our retention is good," he said. "We're not getting a lot of apps, but we're not losing people, either."

But not every restaurant owner has the same experience.

Visar Kelmendi, co-owner of Italian restaurant Pasta Bella in Mason City, described the staffing issues he is facing as “horrible.”

“Nobody wants to work anymore,” Kelmendi said. “I’m putting in over 80 hours a week.”

Brown went on to elaborate that it’s not just wait staff he’s short on, it’s every position within his restaurant.

Colleen Frein, the vice president of the Mason City Chamber of Commerce says that the struggles of Papa’s American Cafe and Pasta Bella are shared by the majority of the restaurants in the city.

“I think every restaurant I’ve talked to in the last several months has been short on workers,” Frein said. “Owners are working open to close by themselves with very limited staff in there to help them out… Sadly, we’ve seen across the board that nobody is applying for these jobs.”

Other restaurateurs are finding it necessary to make other concessions, Dunker said.

According to the Iowa Restaurant Association’s survey of its members, more than half are not operating at full capacity, more than a third are closed for one or more days per week more than normal, and a fifth have dropped breakfast or lunch service.

The shortage is also placing a stress on the staff that have remained. According to the association’s survey, nearly nine out of 10 restaurants say existing staff are working more hours and performing more duties, and roughly a fifth of restaurants are rotating staff among multiple locations.

But the Indeed Hiring Lab, a team of economists who use Indeed job board data to study the labor market, found the number of Iowa job seekers briefly increased after Reynolds announced the move in April, but job searches decreased after the federal benefit ended, and is now below the late April baseline.

Advocates for higher workers’ wages are often critical of restaurant worker wages. The median hourly wage for food preparation and serving-related jobs in Iowa was $11.11 in May 2020, the most recent point the data is available, according to federal Bureau of Labor Statistics data.

In order to attract staff during this shortage, many restaurants are boosting base wages and some are offering incentives like signing bonuses.

“They’re willing to pay it because the market demands it,” Dunker said. “We really feel like wages have been driven up, and the market's done that, and that’s fine.”

Iowa’s overall unemployment rate was 3.9% in May, down by more than half the 8.3% it was one year earlier during the pandemic, according to the state’s workforce development data.

DES MOINES — Gov. Kim Reynolds on Wednesday again urged Iowans to get vaccinated as the best defense against COVID-19 and its variants, but ex…

McDonald’s in Marion advertises hiring at up to $13 an hour on Friday.

A sign notifies customers of Papa’s American Cafe’s staff shortage on the door outside.

Pasta Bella co-owner Visar Kelmendi puts an order into the system with one of his wait staff.