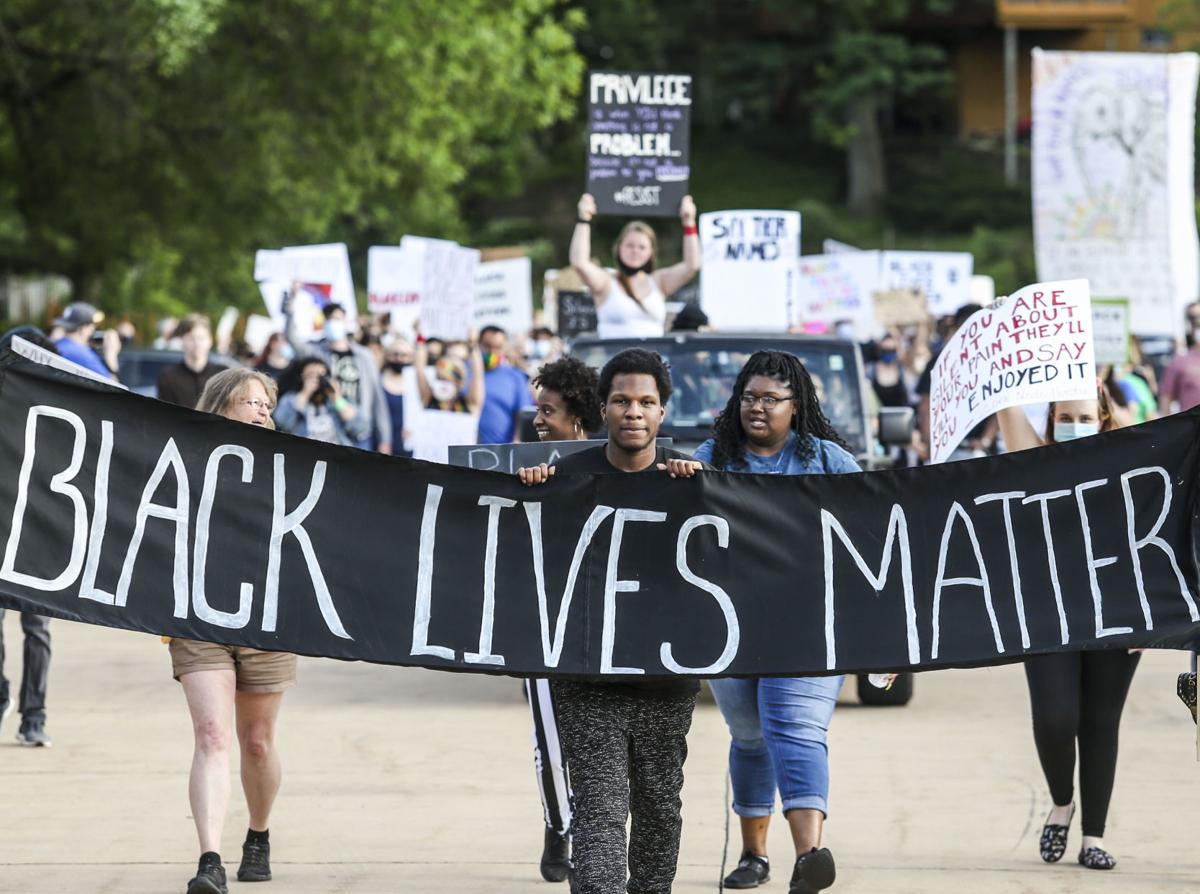 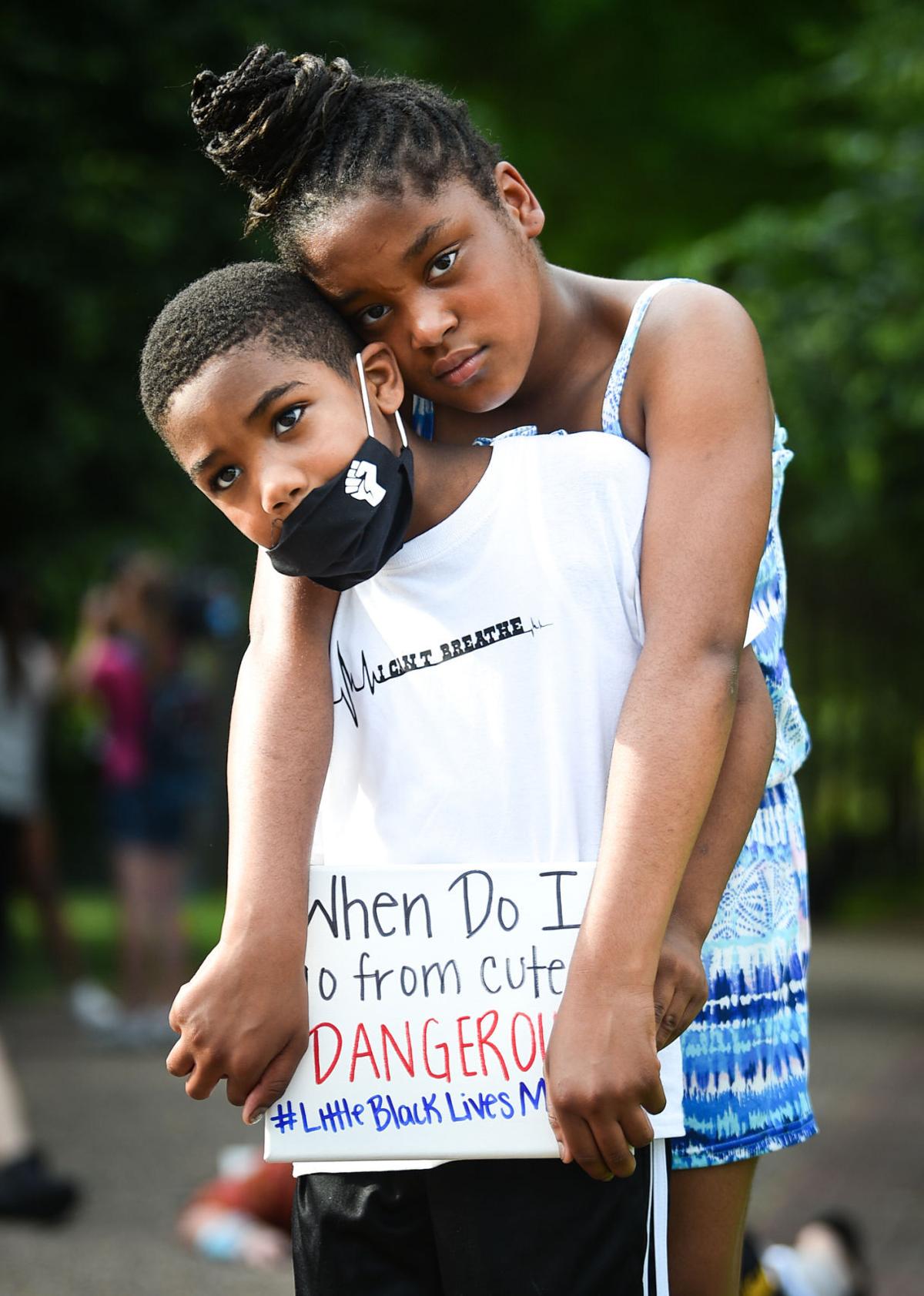 Tavionna Williams, 11, and Aarien Henderson, 6, hold a sign that reads “When do I go from cute to dangerous? #LittleBlackLivesMatter” during a protest in honor of George Floyd at VanderVeer Park Thursday, June 4, 2020 in Davenport.

As they celebrated the achievement, leaders across the political spectrum called the new law, which included some policing reforms, significant but just a first step toward social justice.

A year later, Republican majorities in the Iowa Legislature have advanced multiple pieces of legislation that would add protections for law enforcement officers. But Republicans have moved no bills that would advance social justice or racial equity.

That second step is yet to be taken. And with time winding down on the 2021 legislative session, it looks like any proposal will have to wait until next year at the earliest.

“We were one of the first and maybe one of the only states that actually passed legislation in the heat of the moment last June, amongst the national conversation on social justice, and we did that in a bipartisan, I believe unanimous way. And we’re all for a peaceful protest and having this conversation,” Republican Iowa Senate Majority Lead Jack Whitver, of Ankeny, said on a recent episode of “Iowa Press” on Iowa PBS.

“But where our caucus has started to focus is when you cross the line toward assaulting police officers and shining lasers to injure their eyes during these protests, that’s something that we want to stop and need to stop,” Whitver said. “So some of the issues that we put forward relate more to that this year than anything.”

Asked if social justice legislation this year has faltered at the expense of Republicans’ focus on showing support for law enforcement, Whitver replied, “I don't know if it’s at the expense of that. The bills that came to my desk through the committee process that our caucus wanted to work on generally slanted toward ‘back the blue,’ and we want to keep that promise that we made to voters.”

Republican Iowa House Speaker Pat Grassley, of New Hartford, said there were bills that addressed social justice issues like measures designed to reduce racial profiling by police, but those bills did not have enough support to pass the Republican-majority body.

“We’ve tried to make progress on some other issues, so it’s not like we just worked in June and didn’t take any further action,” Grassley said this week. “Not every bill that’s introduced gets signed into law or makes it through the House chamber its first year.”

Zach Wahls, of Coralville, leader of the minority Democrats in the Iowa Senate, this week expressed his disappointment at the lack of action on social justice legislation this session.

“Last summer, Democrats and Republicans came together, we were told this was the first step,” Wahls said. “It’s incredibly disappointing that Republicans have completely squandered this opportunity to continue to lead on reform to public safety. And what every Iowan wants is a police force that is available in case of emergency, is accountable to the public when they make mistakes, and is not engaged in things like racial profiling.”

Wahls credited Republican Gov. Kim Reynolds for legislation she proposed at the outset of the 2021 session that combined elements of support for law enforcement and racial equity. Reynolds’ bill included a ban on racial profiling by police and also defined and created punishments for anyone who participates in a riot or attacks law enforcement officers.

“The bill will make clear that if you riot or attack our men and women in uniform, you will be punished. We won’t stand for it,” Reynolds said during her annual condition of the state address in January. “The bill will also ban racial profiling and other forms of disparate treatment. Because no actions should ever be taken based upon the color of someone’s skin. As Martin Luther King Jr. recognized, ‘Injustice anywhere is a threat to justice everywhere.’”

Reynolds also, between the 2020 and 2021 legislative sessions, established a committee to discuss further social justice proposals. The committee was comprised of state officials, law enforcement officials, advocates, and other stakeholders, and its proceedings were led by Adam Gregg, Reynolds’ lieutenant governor and a former state public defender.

The committee met five times and created a report with three recommendations for more police reforms: require and automate data collection on race and ethnicity from law enforcement stops; analyze and study the data, and provide annual reports on the findings; and ban disparate treatment in law enforcement activities and the delivery of police services.

“Race and other individual demographics simply shall not be a factor in police action outside of situations involving a description of a specific suspect, and Iowa law should reflect that principle,” the committee’s report says.

While Reynolds introduced that compromise legislation and formed the committee that made recommendations to the Legislature, she has not publicly advocated for any of the reforms during this year’s session.

Another report, filed in December by the state human rights department, also recommended steps be taken to end racial profiling, and also recommended legislators examine policies designed to eliminate racial disparities in the adult and juvenile criminal justice systems, and in the use of excessive force on incarcerated Iowans.

No such legislation advanced during this year’s session.

Tavionna Williams, 11, and Aarien Henderson, 6, hold a sign that reads “When do I go from cute to dangerous? #LittleBlackLivesMatter” during a protest in honor of George Floyd at VanderVeer Park Thursday, June 4, 2020 in Davenport.