Lollapalooza opened Thursday in Grant Park amid a swirl of questions — about crowds, about rising COVID-19 cases in Chicago, about how extra entry procedures and health screening would be handled.

That last question turned out to be a non-question, at least in the early hours of the festival’s first day. Lollapalooza continues through Sunday with a lineup of national and local musicians on seven stages, returning to Chicago’s lakefront after taking last year off because of the pandemic.

Crowds began gathering in the sun at the Van Buren and Harrison street entrance chutes on Michigan Avenue well before 11 a.m. Both there and later inside the grounds, few masks were to be seen.

A group from Cleveland were among the first in line at the Van Buren entranceway. They said they had arrived at about 8:30 a.m. because they wanted to be first in. “We’re running first to the merch, then to the guardrails,” said Robbie Rodick, 24.

The merch is the band merchandise that they heard can sell out on the morning of the first day. The guardrail is at the front of the T-Mobile stage, where they wanted to stake their claim all the way through Playboi Carti and Miley Cyrus Thursday night.

Once the gates opened, a little early at 10:50 a.m., those crowds were quickly dispatched into the park.

Lollapalooza requires proof of COVID-19 vaccines at the gates, or concertgoers can provide a negative COVID-19 test result within the last 72 hours. The festival, put on by Austin, Texas-based C3 Presents, is not using apps such as the CLEAR app that have been used by music festivals elsewhere, asking instead for paper documents and copies of vaccine cards. Digital copies have also been accepted at the entranceways.

The festival is the largest gathering of its kind in Chicago since before the pandemic. Mayor Lori Lightfoot has defended allowing the festival’s return, even as she has said she would consider a mask mandate and other restrictions once the city returns to having at least 200 COVID-19 cases per day on average.

Lightfoot said safety is a “primary consideration” at such gatherings, “and certainly this year.”

“We have had very robust planning around safety for weeks if not months leading into the start of Lollapalooza today,” she said, adding there’s been an effort to identify and mitigate “soft spots” around the perimeter of the festival site.

The city’s average number of daily new cases inched up to 190 on Thursday, up from 185 the previous day, but far below an April peak of nearly 650 new cases per day. Hospitalizations remain low, averaging eight new instances daily, while the average number of deaths daily related to COVID-19 remains below one.

But hours after Lollapalooza got underway, Cook County was added to the Centers for Disease Control and Prevention’s lists of areas experiencing “substantial” COVID-19 transmission. Cook now joins DuPage, McHenry and Will counties in the Chicago area in meeting the threshold where masks are recommended for everyone indoors, regardless of vaccination status.

Also at the entrance, Samantha Trampush had never been to the Lollapalooza music festival before, but said this year was different. She and her five friends, some donning face sparkles, all in their early 20s, decided to buy tickets this year. On the first day the sales were available, the squad agreed to snag their tickets. They said they are most excited to see the performances of Olivia O’Brien and Miley Cyrus.

Emily Ermal, 20, from Downers Grove, said she wanted to be in the front row at the Bud Light Seltzer stage. She was last at Lolla in 2019. “I’ve just missed concerts so much,” she said.

Inside, the T-Mobile stage gathered some of the largest crowds, including for sister pop duo Aly & AJ early in the afternoon. Before their second-to-last song, they thanked C3 Presents for having them and musician Perry Farrell, who is in attendance this year, for founding the festival decades before. Lollapalooza is calling 2021 its 30th anniversary.

“So happy (expletive) birthday,” the sisters said from the stage before launching into “Potential Breakup Song,” their 2007 hit from the album “Insomniatic.” The crowd, some of whom had been seeking tree shade at the sides of the field, rushed forward with an audible whoop.

Around 3 p.m., two Chicago police officers were seen escorting a woman outside the festival. “There goes a fence jumper,” said a Lollapalooza staff member. Unlike past years, the city will not release daily reports of medical transports or arrests, and will instead report overall information at the end of the festival, said Mary May, a spokesperson for Chicago’s Office of Emergency Management & Communications.

Earlier near the merchandise area, when asked who they were most looking forward to seeing, a group of friends from Naperville replied in unison “Miley Cyrus.”

The first-time Lolla-goers were worried about COVID-19, crowds and heat despite being vaccinated.

They expressed concern about people who are faking their vaccination cards.

“I don’t wanna get separated.”

“I wanna end up in a mosh pit,” said Bebe Grimaldo, 17. Her friends laughed.

“I didn’t sleep all of last night, so I’m just hoping I don’t pass out.”

“I bet they’re gonna shut down and make a mask mandate on Monday,” said Alexis Withrow, 19. “They wanna wait until Lolla’s done.”

“It brings in money.”

“They got my money!”

Echo McCutchin and Olivia Quintana, both 19, drove 16 hours from Denver to attend the festival. They’re most excited for All Time Low, Post Malone and Tyler the Creator.

“If we weren’t vaccinated we definitely wouldn’t have come,” McCutchin said. “It’s definitely a bad situation.”

At around 1 p.m., Jennifer Fales, Scarlett Wallen and Sheryl Peven were on their way to a cocktail tent near Buckingham Fountain. They had a packed weekend ahead, looking forward to acts that ranged from the Black Pumas to Miley Cyrus to the Foo Fighters. All the women are in their 50s.

“We’re oldies but goodies, and we like the Foo,” Wallen said.

It was Fale’s first time at Lollapalooza, though she’s lived in the area for 25 years; Wallen and Peven are veterans. Wallen said she liked to discover new music at the festival — she first discovered the Avett Brothers there, she said.

Wallen and Fales were both unvaccinated, but neither was particularly worried about the delta variant. “I mean, I’m not happy about delta,” Wallen said, but added that the festival was outside and she planned to keep her distance from others.

GOP governors have asked for meeting with Biden over border

If the weather holds, this autumn in Iowa promises to be “early and vibrant.” 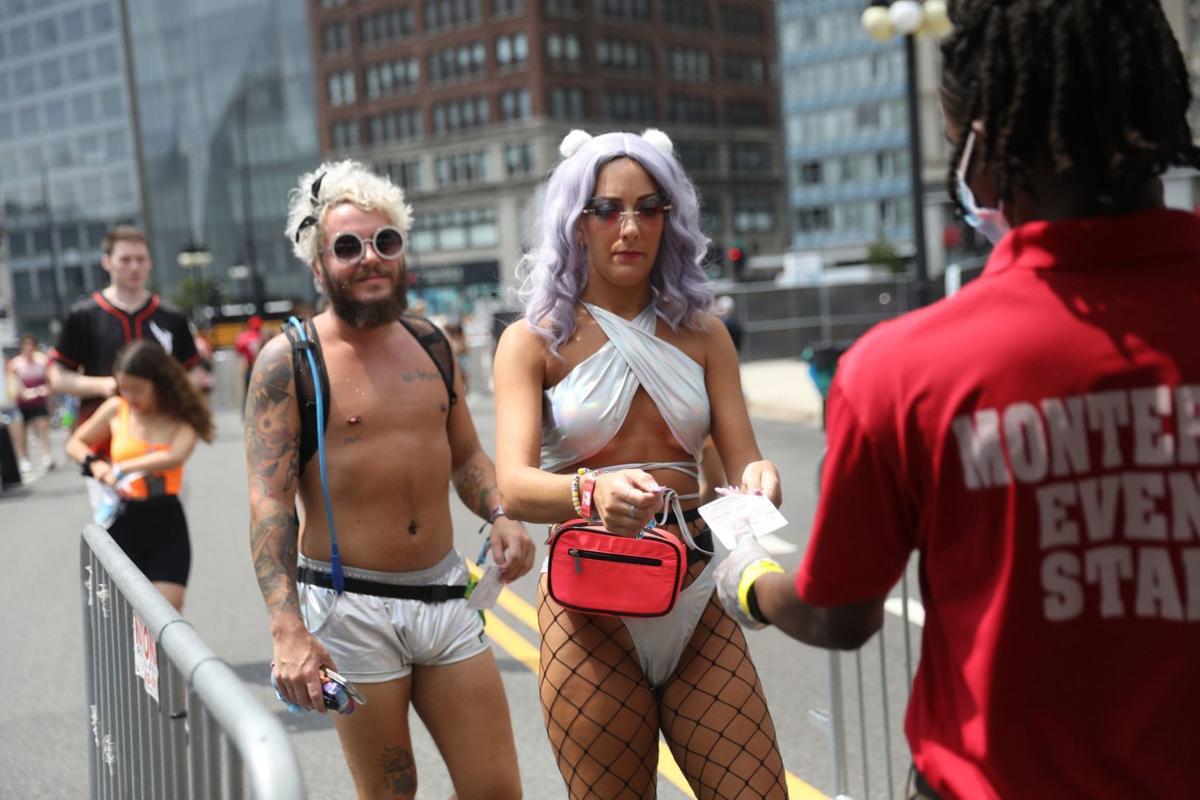 Jenna Tomaszewski, 26, and Alex Turner, 28, both of Tennessee, show their COVID-19 vaccination cards as they arrive for the first day of the Lollapalooza music festival in Chicago's Grant Park on July 29, 2021. A vaccination card or negative COVID-19 test is required for entry to Lollapalooza this year. 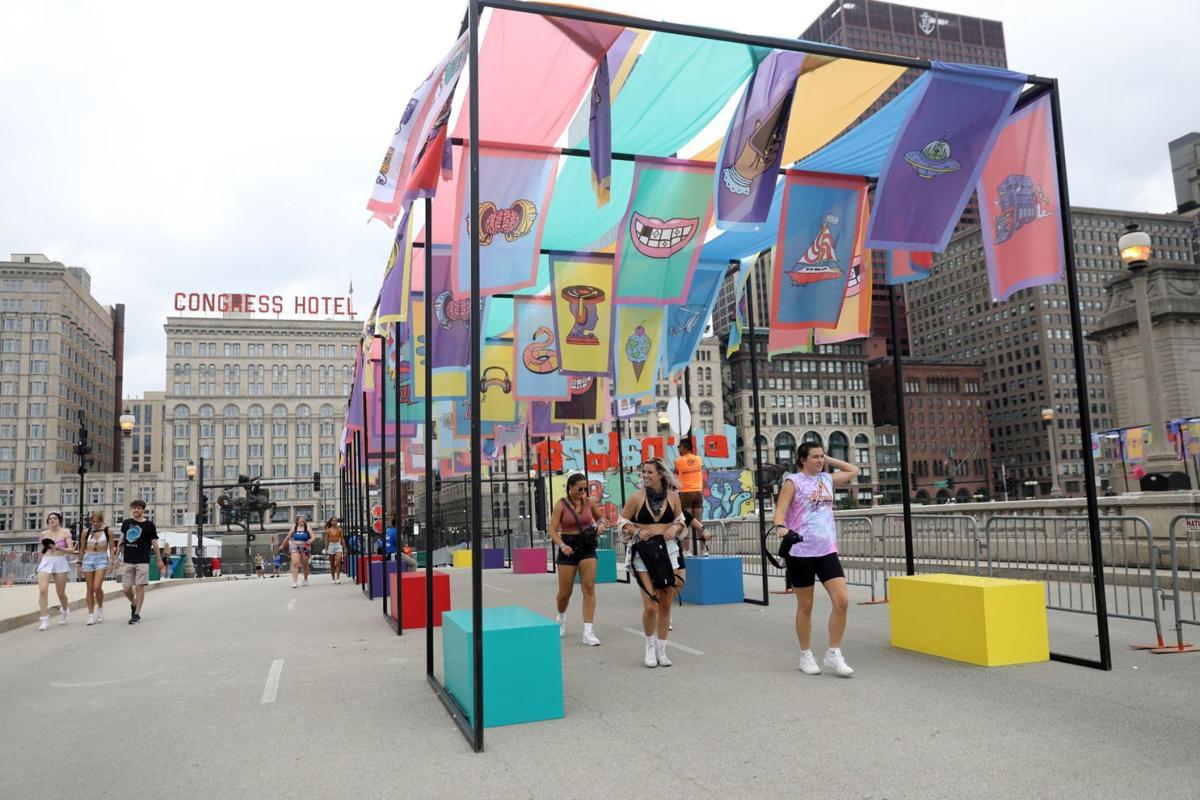 People arrive on the first day of the Lollapalooza music festival in Chicago's Grant Park on July 29, 2021.