This is the Exelon Generation’s Quad-Cities Station nuclear plant. A new energy bill as it stands provides $694 million in subsidies to nuclear energy giant Exelon and requires that coal-fired power plants in the state must close by 2035 and natural gas plants must close by 2045. Working groups of lawmakers, stakeholders and the governor’s office continue to negotiate the omnibus bill. 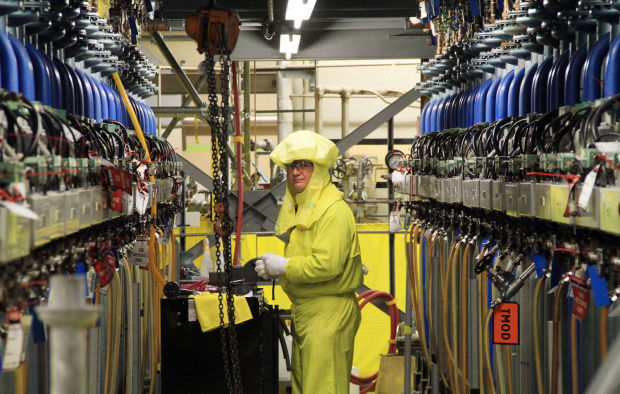 A Worker replaces some of the units that lift the nuclear fuel assemblies into place while the reactor is operating at the Quad-Cities Generating Station near Cordova, Illinois Thursday March 22, 2012. (Kevin E. Schmidt/QUAD-CITY TIMES) 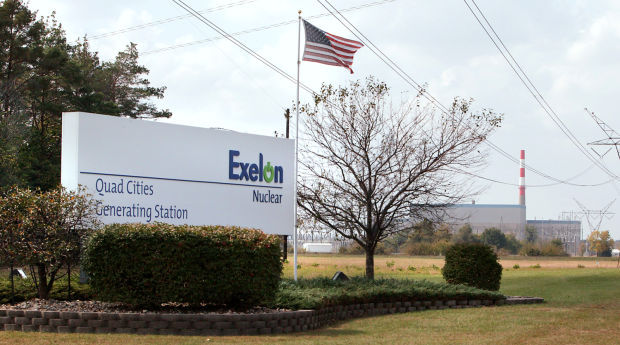 The Quad-Cities Generating Station near Cordova.

SPRINGFIELD – The latest draft of an energy regulatory overhaul bill that has been in negotiations for months was unveiled late Thursday ahead of lawmakers’ planned return to the Capitol to vote on it next week.

While the bill as it stands provides $694 million in subsidies to nuclear energy giant Exelon and requires that coal-fired power plants in the state must close by 2035 and natural gas plants must close by 2045, working groups of lawmakers, stakeholders and the governor’s office continued to meet Friday to negotiate the omnibus bill.

The governor’s office distributed an outline of the bill, along with a draft of an 866-page amendment, to members of the working group late Thursday.

One of the major points of negotiation at this point is what to do with municipal coal-fired power plants.

The Prairie State Energy Campus, located in Marissa, Illinois, is a 1,600-megawatt coal-fired power plant that provides power to several municipal utilities in Illinois and other states. It is largely financed through municipal bonds from those communities, including Naperville, Batavia, Winnetka and others. In all, the facility cost about $5 billion and the bonds are due to be paid back through at least 2035.

“Also highlighted are the measures in the bill that pertain to the Prairie State Energy Campus, which remains subject to the declining caps on greenhouse gases,” the governor’s office wrote in a memo to working group stakeholders. “An exemption for the nation’s seventh largest polluter remains unacceptable to the Governor, as well as the nearly 50 legislators that have indicated they will not support a bill that does so.”

The governor’s proposal received pushback in the Senate as the May 31 scheduled end of session passed, with Senate President Don Harmon citing concerns about municipal coal plant closures from members of his Democratic caucus as a reason for slowing the bill down.

Harmon’s office had drafted a bill separate from the governor’s this week, which a spokesperson said was drafted to drive discussion through the weekend working group sessions.

Rep. Ann Williams, D-Chicago, who was the sponsor of the Clean Energy Jobs Act bill, which has been a major part of working group negotiations, said in a phone call Friday the group is in the process of reconciling some portions of the two draft energy bills, including the coal-fired power plant measures.

She was one of the lawmakers who signed onto a letter urging the governor not to exempt Prairie State from closure, and she noted the municipalities saddled with bond debt for the facility will have to repay that no matter what happens with the legislation. Shuttering the plant would allow the municipalities to procure cleaner, and possibly cheaper, energy, she said.

But lawmakers from Springfield and the Metro East area, which includes the Prairie State plant, held a news conference last week strongly opposing closure of the Prairie State Campus and Springfield’s City, Water, Light and Power municipally-owned coal-fired power plant. They urged an exemption for the two plants.

A coalition of more than 20 labor unions also sent a letter to the governor Thursday requesting the plants be exempted from closure by 2035 as well.

“Combined, these two plants employ more than 1,100 workers and support an additional 1,000 skilled union tradesmen and women in good, high paying jobs,” the union leaders wrote in the letter. “If legislation is enacted to close these plants before the end of their useful lives, there will be devastating consequences. Thousands of employees will lose their jobs, stifling economic activity in areas of the state where jobs can often be hard to come by.”

But the governor’s bill, in the form introduced Thursday night, would still include the Prairie State Campus for closure by 2035, although it would also contribute $2 million annually in ratepayer funds for decommissioning costs. It would also create a new task force to “investigate carbon capture and sequestration and debt financing options for Prairie State and affected municipalities.”

The bill does not include a price on carbon emissions, which had been in a previous version, which means most of the measures in the bill are ratepayer funded. Instead, it authorizes the governor to create a “commission on market-based carbon pricing solutions.”

The bill would also create state subsidies for three new nuclear plants, making it so five of Exelon’s six Illinois plants are receiving subsidies. Braidwood, Byron and Dresden plants would receive $694 million combined in total over five years. Plants in Clinton and the Quad Cities received a 10-year subsidy of over $2.3 billion total under the 2016 Future Energy Jobs Act.

According to the governor’s office’s analysis, the “average residential ratepayer” would pay about 80 cents per month extra for the subsidies.

The average residential customer would be asked to pay about $1.22 extra per month to pay for an added investment in renewables such as wind and solar power. That would aid the state’s effort to achieve 40 percent renewable energy by 2030.

Ratepayers would pay an estimated added 86 cents per bill for an expanded low-income weatherization program.

The proposal would also require the Illinois Commerce Commission to investigate how and if utility giant Commonwealth Edison used ratepayer funds “in connection with” the company’s conduct as outlined in a deferred prosecution agreement last year in which the company admitted to bribery charges. The company allegedly gave no-work jobs to close associates of House Speaker Michael Madigan, who has not been charged.

It would require that ratepayer funds which were used in connection with conduct outlined in the court document to be returned to ratepayers.

The bill would also end automatic formula rate increases, which allow utilities to raise rates by essentially bypassing regulators. The bill would restore a process of requiring approval before an increase, or requiring “performance-based” ratemaking, according to the governor’s office.

It also requires an independent audit of the electric grid and expenditures since 2012.

The bill also does not change the way energy capacity is procured in Illinois as it would have in previous versions.

The bill also sets goals of putting 1 million electric vehicles on the road by 2030, including by offering $4,000 rebates for the purchase of electric vehicles, as well as rebates or grants that fund up to 80 percent of the cost of the installation of charging stations.

The Senate is scheduled to return Tuesday and the House Wednesday to consider an energy bill.

Capitol News Illinois is a nonprofit, nonpartisan news service covering state government and distributed to more than 400 newspapers statewide. It is funded primarily by the Illinois Press Foundation and the Robert R. McCormick Foundation.

Champaign man arrested in death of boy, 14, found in ditch

URBANA, Ill. (AP) — A Champaign man has been arrested in the death of a 14-year-old boy whose body was found Friday in a roadside ditch by passersby.

‘I’m back’: Ex-con Blagojevich sues for right to run again

CHICAGO (AP) — Ex-con and former Gov. Rod Blagojevich sued his home state Monday for booting him from the governor’s seat after his 2008 arres…

Two charged in death of man, 73, during Chicago carjacking

CHICAGO (AP) — Two people, an 18-year-old and a 17-year-old, were charged Friday with first-degree murder in the death of a 73-year-old Chicag…

Morton Salt cuts 40% of staff at its Chicago headquarters

VILLA PARK, Ill. (AP) — A suburban Chicago school board adjourned without voting on a mask mandate for students and staff after the proposal s…

CHICAGO (AP) — Chicago’s top doctor said Sunday that there are no current plans for again imposing pandemic-related closures, despite a spike …

2 die in crash during police pursuit in western Kentucky

PADUCAH, Ky. (AP) — Two people have died from injuries suffered in a crash that occurred during a police pursuit in western Kentucky, authorit…

TERRE HAUTE, Ind. (AP) — An Illinois woman who oversees the estate of a slain Terre Haute police officer's son has been arrested for allegedly…

This is the Exelon Generation’s Quad-Cities Station nuclear plant. A new energy bill as it stands provides $694 million in subsidies to nuclear energy giant Exelon and requires that coal-fired power plants in the state must close by 2035 and natural gas plants must close by 2045. Working groups of lawmakers, stakeholders and the governor’s office continue to negotiate the omnibus bill.

A Worker replaces some of the units that lift the nuclear fuel assemblies into place while the reactor is operating at the Quad-Cities Generating Station near Cordova, Illinois Thursday March 22, 2012. (Kevin E. Schmidt/QUAD-CITY TIMES)

The Quad-Cities Generating Station near Cordova.