FILE - In this May 23, 2020 file photo, Illinois Speaker of the House Michael Madigan, D-Chicago, talks on his cellphone from his desk during an extended session of the Illinois House of Representatives at the Bank of Springfield Center, in Springfield, Ill. ComEd has agreed to pay $200 million to resolve a federal criminal investigation into a long-running bribery scheme that implicates Illinois House Speaker Michael Madigan, the U.S. Attorney's office announced Friday July 17, 2020. (Justin L. Fowler/The State Journal-Register via AP, Pool, File)

House Speaker Michael Madigan, D-Chicago, listens to debate on the House floor at the State Capitol, in Springfield, Ill.

CHICAGO — Federal prosecutors recently answered the question about whether Illinois House Speaker Michael Madigan, the nation’s longest serving statehouse speaker, is a subject of a criminal investigation into influence peddling to benefit an energy utility. He is.

The looming question now is whether the Chicago Democrat will actually be charged — and if the 78-year-old is charged, when and with what possible crimes.

Here’s a look at those and other questions:

Q: HOW DO WE KNOW MADIGAN IS A TARGET?

A: Multiple clues over the past 12 months raised the possibility that he was a federal investigative target, including charges against political allies. But a bombshell filing by the U.S. attorney’s office in Chicago last Friday erased all doubts.

The deferred prosecution agreement revealed that ComEd agreed to pay $200 million to resolve an investigation of a nearly decadelong bribery scheme in which the electric utility secured jobs and contracts for associates of a top-level official in return for favorable legislation action.

The document didn't name Madigan, but it may as well have. It referred to a “Public Official A” as the one ComEd sought to “influence and reward.” The official, the filing went on to say, was “the Speaker of the House of Representatives.” That could only be Madigan, who has been House speaker since 1983 — except for two years in the 1990s when Republicans controlled the House.

Q: DOES THAT SUGGEST CHARGES ARE IMMINENT?

A: “It means prosecutors are coming for him,” said Phil Turner, a defense attorney and former prosecutor in the U.S. attorney’s office in Chicago. “They have laid siege to the castle and it’s only a question of time when they assault.”

There’s a history in Illinois of things ending up badly for those identified in court filings as Public Official A.

Rod Blagojevich was identified in criminal court filings as “Public Official A” long before the then-Illinois governor was charged in 2008 with lying to the FBI, attempted extortion, conspiracy to commit bribery and other counts. Blagojevich served half of a 14-year prison sentence before President Donald Trump commuted his sentence this year.

Q: DO OTHER CASES SHED LIGHT ON POSSIBLE CHARGES?

A: In Illinois, a state that’s become synonymous with pay-to-play corruption, there’s no shortage of cases to look to for indications about charges Madigan could face.

Former state Sen. Martin Sandoval pleaded guilty just this year to bribery and tax charges for receiving $250,000 from a red-light camera company for blocking proposed legislation that might have hurt its business. The bribery charge carries a maximum 10-year prison term, while the tax count carries up to three years behind bars.

Taxes charges are common in bribery cases because those accepting bribes never declare money under the table as income.

But bribery doesn’t have to involve money. It can include providing jobs to a politician’s associates.

Federal prosecutors can and often do slap on a wire fraud charges if someone ever uses a phone in carrying out a crime. Each time a suspect uses a phone to do something illegal is a potential wire fraud count. A single count carries a sentence of up to 20 years in prison.

Q: HOW CLOSE COULD CHARGES BE?

A: That prosecutors took the unusual step of identifying Madigan as a chief suspect before any indictment suggests charges could come any day, said Turner.

As a lawyer himself, Madigan likely knows that.

Even though it was widely known prosecutors were investigating Blagojevich, it came as a surprise — including to Blagojevich — that agents arrested the Democratic governor at his home, waking him up at dawn and leading him away in handcuffs.

“The lesson that Madigan has to learn from Blagojevich is that he has to be prepared to be arrested,” said Turner.

A: It’s not at all clear that Madigan, who also heads the state Democratic Party, will succumb to pressure to step down, even if he is charged. Bending to pressure hasn’t been a characteristic of the famously intransigent speaker.

Cracks, though, are starting to show in his once-rock solid support across the Democratic establishment.

On Monday, Chicago Mayor Lori Lightfoot stopped just short of calling for Madigan to resign, telling reporters that, “If those allegations are true, obviously he should resign.” She added: “We don’t know that they are true yet.” Illinois Gov. J.B. Pritzker made similar statements.

Q: WHAT HAS MADIGAN SAID?

A: Madigan rarely speaks publicly. After the Friday ComEd filing, he released a statement through party spokeswoman Maura Possley, who said Madigan “has never made a legislative decision with improper motives and has engaged in no wrongdoing here.”

Copyright 2020 The Associated Press. All rights reserved. This material may not be published, broadcast, rewritten or redistributed without permission.

Name of girl killed in Mercer County accident is released

SPRINGFIELD — The state on Tuesday announced another 20 COVID-19-related deaths and 1,549 new confirmed cases of the virus.

IOWA CITY, Iowa (AP) — A rare storm packing 100 mph winds and with power similar to an inland hurricane swept across the Midwest, blowing over…

Cave-In-Rock has evolved from pirate hideout to picnic spot

CAVE-IN-ROCK, Ill. (AP) — What a difference a couple of centuries can make.

SPRINGFIELD — Financial aid is about to start flowing for Illinois businesses that have been affected by the COVID-19 pandemic.

State of the Standoff

State of the Standoff

FILE - In this May 23, 2020 file photo, Illinois Speaker of the House Michael Madigan, D-Chicago, talks on his cellphone from his desk during an extended session of the Illinois House of Representatives at the Bank of Springfield Center, in Springfield, Ill. ComEd has agreed to pay $200 million to resolve a federal criminal investigation into a long-running bribery scheme that implicates Illinois House Speaker Michael Madigan, the U.S. Attorney's office announced Friday July 17, 2020. (Justin L. Fowler/The State Journal-Register via AP, Pool, File)

House Speaker Michael Madigan, D-Chicago, listens to debate on the House floor at the State Capitol, in Springfield, Ill. 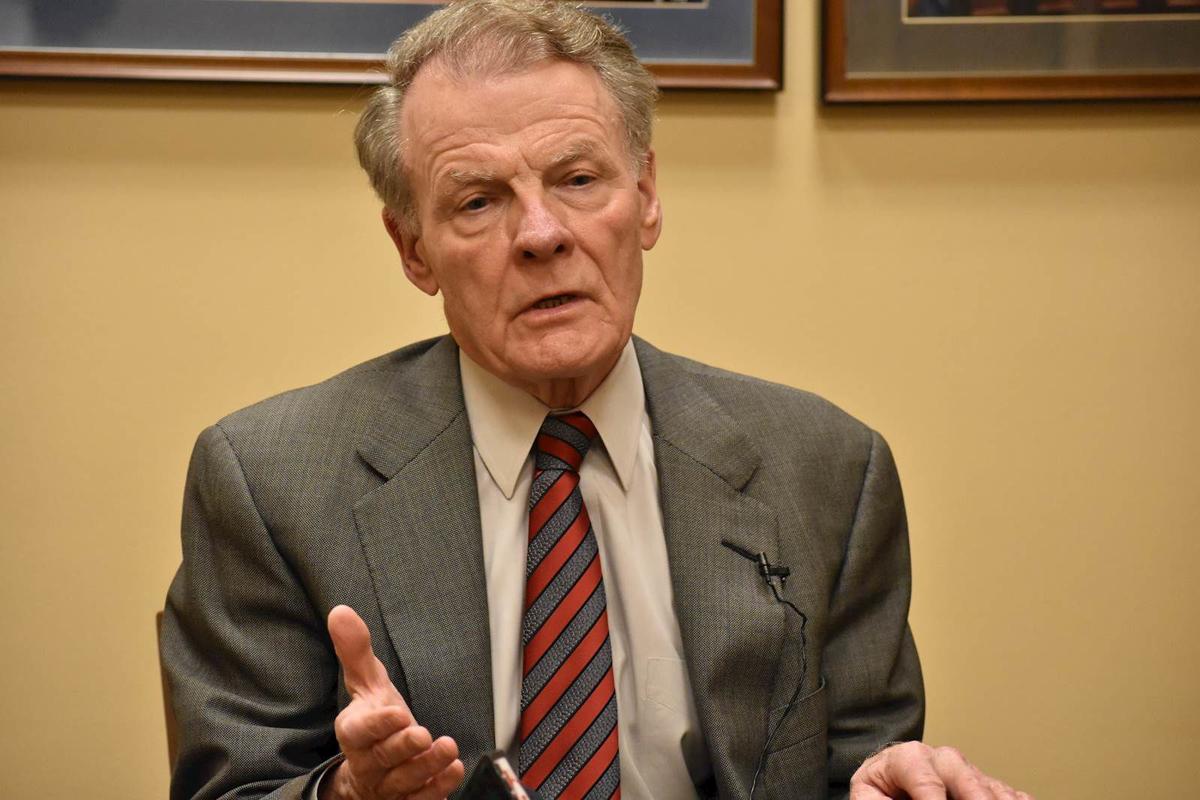