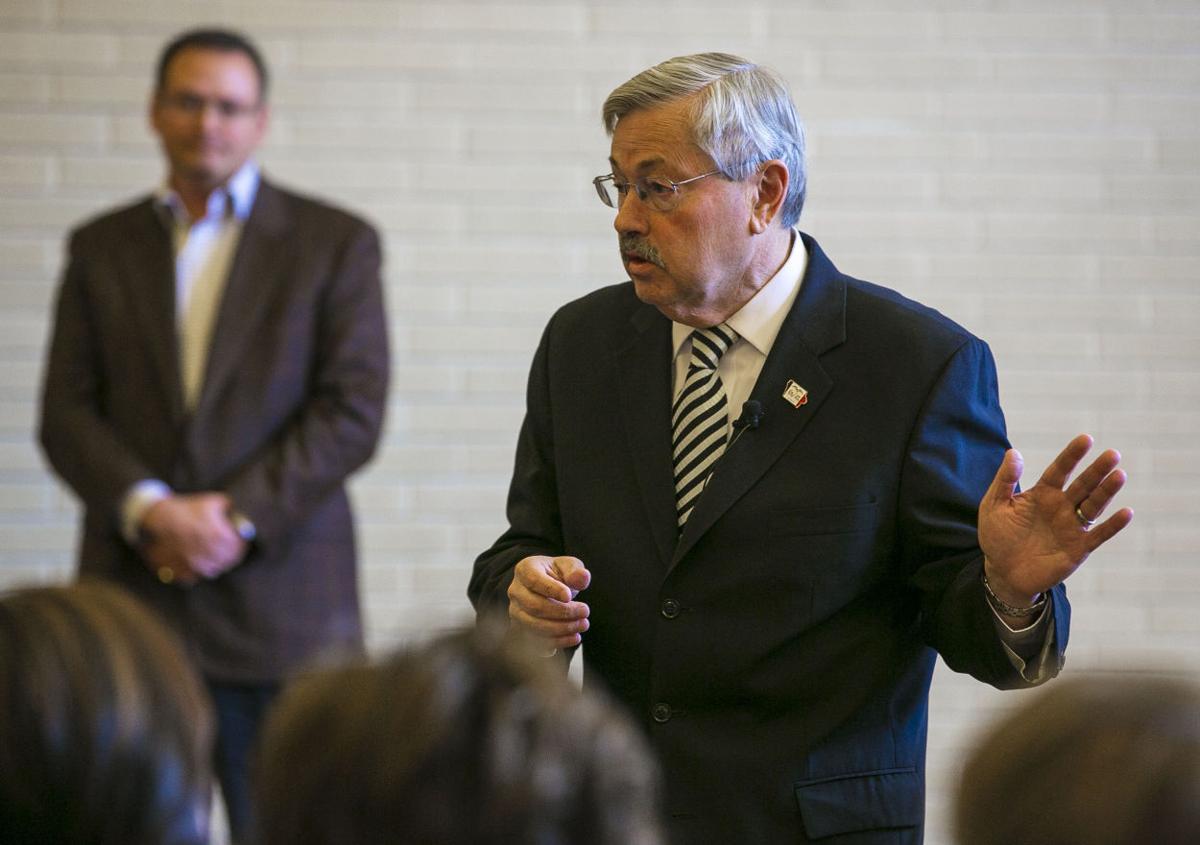 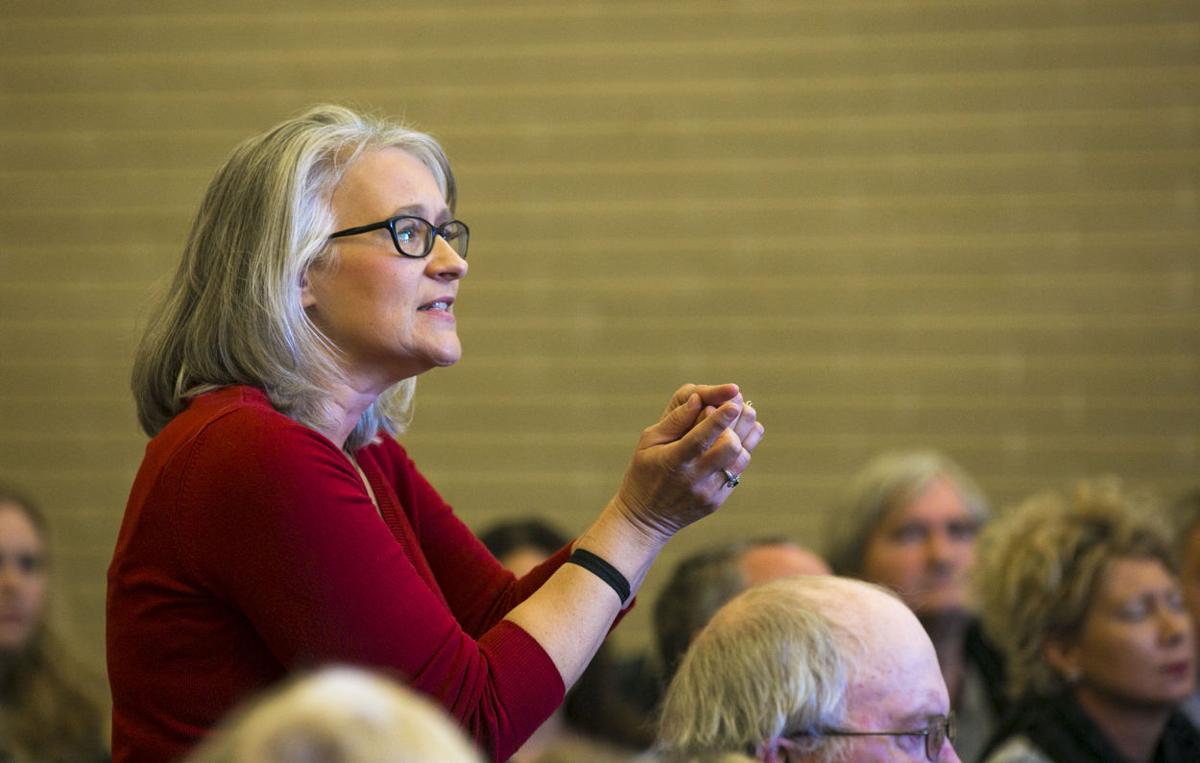 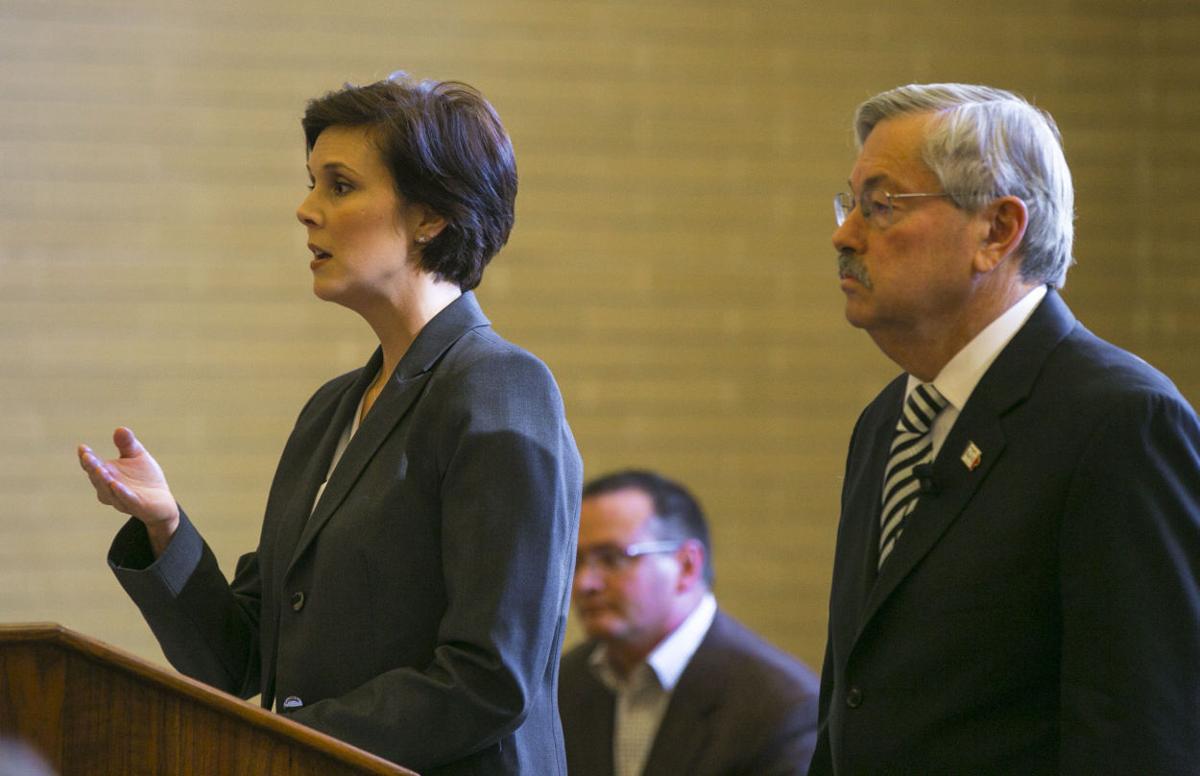 Amy McCoy, spokeswoman for the Iowa Department of Human Resources, and Gov. Terry Branstad answer questions regarding the proposed privatization of Medicaid services during a town hall meeting last year in Mason City.

MASON CITY, Iowa — Joy Newcom of Forest City told Gov. Terry Branstad on Wednesday his proposed privatization of Medicaid services was too much, too soon and had too many unanswered questions.

Newcom, the mother of a 24-year-old son with mental and physical disabilities, expressed her concerns at a town hall meeting Branstad held in Mason City.

About 100 people attended, many of whom had questions about the changes in Medicaid.

Under the new program, as of Jan. 1, about 600,000 Medicaid recipients in Iowa will go from a state-run program to one operated by four managed care organizations.

"You didn't get enough input from families," said Newcom. "There are too many unanswered questions, too many opportunities where families may have to step in to fill the gaps in the program, and they can't afford it."

Branstad said he understood her concerns, but the program, as it is operating now, had serious problems.

"There is a lot of fear in change," he said. "This hasn't even started yet. Costs of the Medicaid program have gone up 73 percent in recent years. If you project this into the future, you can see it's unsustainable."

Branstad said 25 other states have shifted to privatization of the program.

Health care provider and care givers say administrative costs will increase in the new program and the only way to cut costs is to cut services.

Sen. Amanda Ragan, D-Mason City, held a public meeting Friday on the Medicaid changes, attended by about 70 people who opposed the plan. Ragan said while it is true 25 states have privatized the program, none have done it as quickly and with as many unanswered questions as in Iowa.

With Branstad in Mason City was Amy McCoy, public information officer for the Iowa Department of Human Services, to help answer questions.

McCoy said if the present system continued, services would have to be cut because of the growing number of recipients and skyrocketing costs.

"We are trying to make sure nothing falls through the cracks," she said. "Also, we will have an independent ombudsman helping us."

McCoy said her department is holding informational meetings around the state and that one is planned for Mason City in the near future.

Earlier this month, Jill Slaybaugh, fiscal manager for the Iowa Department of Human Services, said privatization will result in $51 million in savings in the first six months.

Branstad was also asked about the Elderly Waiver program in Iowa. DHS recently rejected a request from the Franklin County Board of Health to resume services to patients who lost benefits in the program, which is a part of Medicaid.

In-home assistance was discontinued last year because of a discrepancy in how eligibility and service levels were applied. DHS was able to work through an appeals process to get many of the elderly reinstated.

But one county resident, Oneta Stackhouse, 88, died before her appeal hearing. She had been receiving services for eight years before they were discontinued.

Branstad and McCoy said the state is working to speed up the appeals process and work out other related problems.

DAVENPORT, Iowa (AP) — A man who was shot by a Davenport police officer during a confrontation has died, according to the Iowa Department of P…

DUBUQUE, Iowa (AP) — Two years ago, as his father and grandfather were being inducted into the American Society of Baking Hall of Fame, Tim Tr…

UNION, Iowa (AP) — A 74-year-old man found dead in his central Iowa home this week was killed, police said, and detectives have arrested a 22-…

DAVENPORT, Iowa (AP) — A Davenport woman has pleaded guilty to leaving the scene of a fatal accident in the hit-and-run death of a pedestrian in May.

Suit: Hospitalized man died after his oxygen was turned off

WEST UNION, Iowa (AP) — A lawsuit filed against an Iowa hospital alleges that a 77-year-old man who was being treated for pneumonia died after…

DUBUQUE, Iowa (AP) — A Muscatine man was convicted Tuesday of second-degree murder for the stabbing death of another man during a party in rur…

CEDAR RAPIDS, Iowa (AP) — Police in Cedar Rapids have arrested a teenage boy on suspicion of slashing his parents to death after officers foun…

DES MOINES, Iowa (AP) — An Iowa man has been arrested in a fatal crash that happened in August in Polk County and was instigated, police say, …

AMES, Iowa (AP) — Two people have been charged in the death of a 2-year-old boy in April, Ames police said Thursday.

Amy McCoy, spokeswoman for the Iowa Department of Human Resources, and Gov. Terry Branstad answer questions regarding the proposed privatization of Medicaid services during a town hall meeting last year in Mason City.