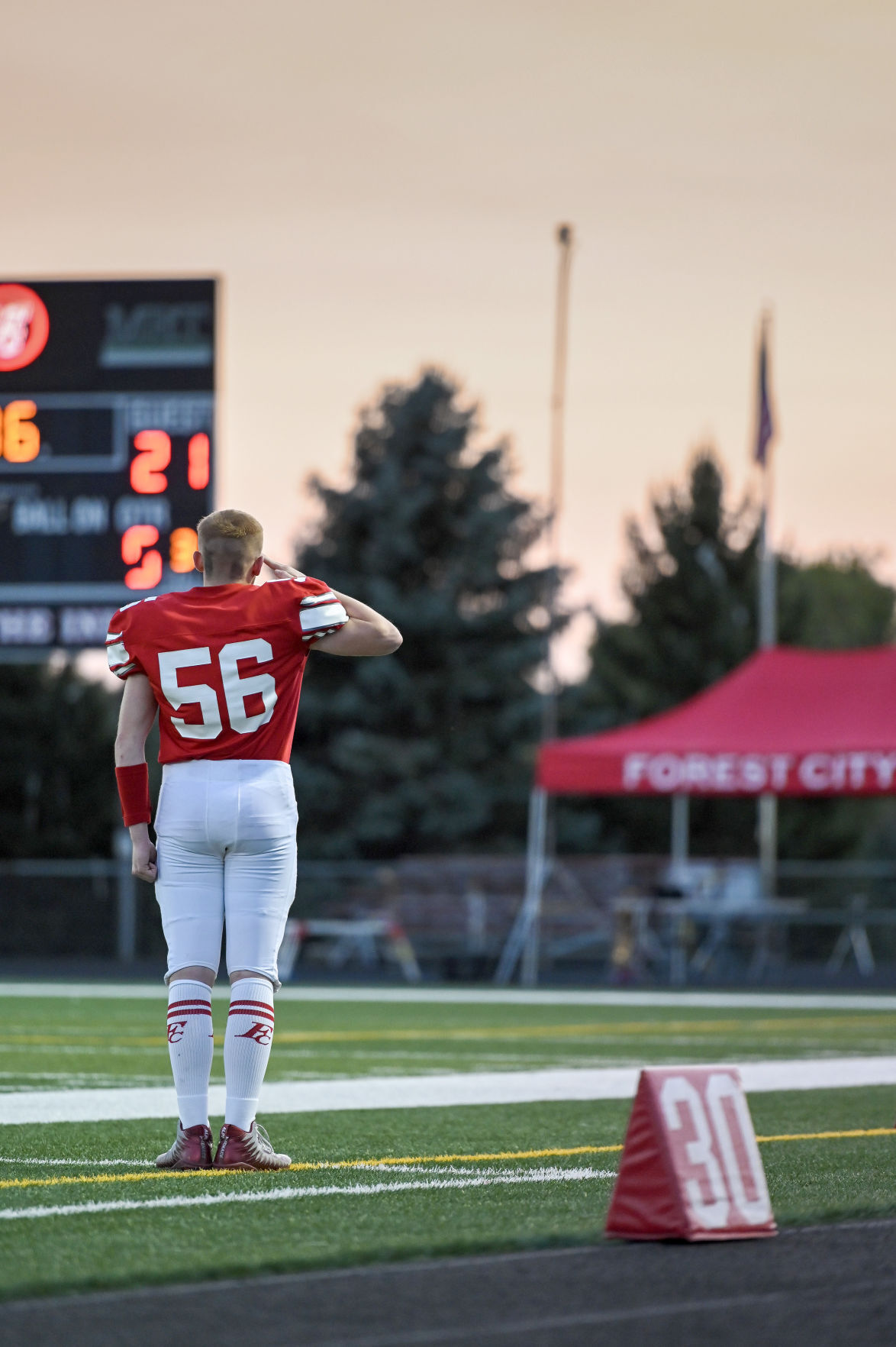 Forest City senior Brice Golwitzer stands at attention and salutes the flag during a home football game earlier in the season. Golwitzer says it's his duty to salute after joining the National Guard this past summer. 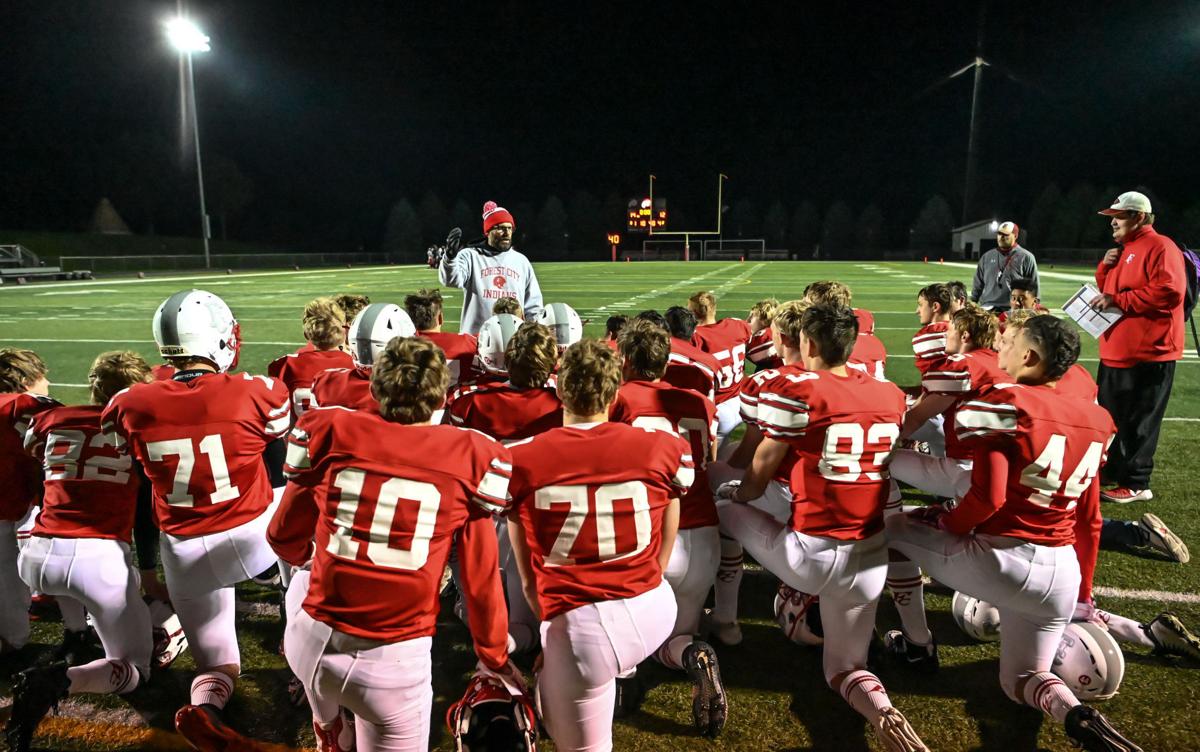 Forest City's head coach Chad Moore talks to his team after a win over Hampton-Dumont-CAL in 2019. 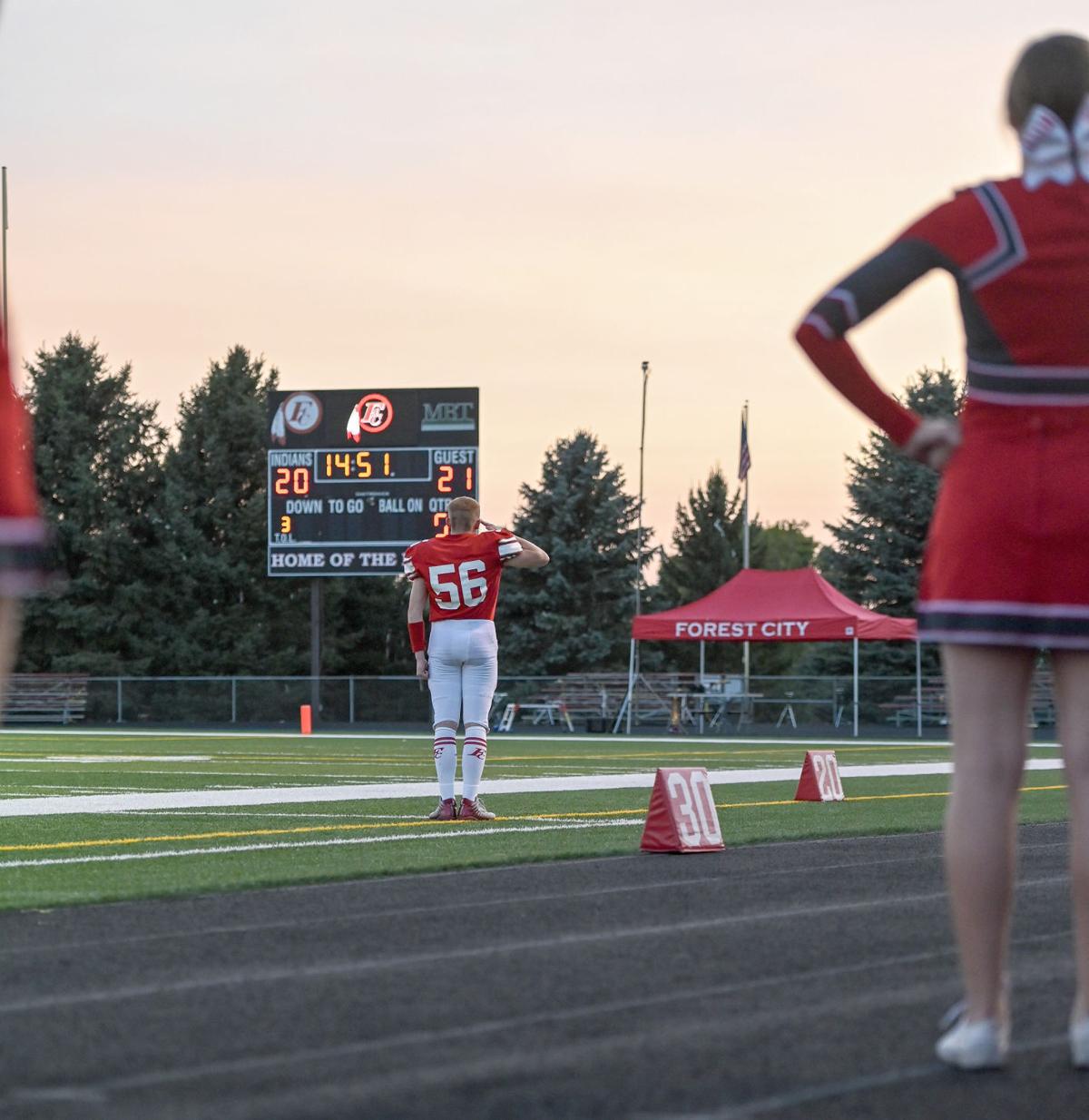 Brice Golwitzer is the only Forest City football player who takes the field during the playing of the national anthem. Indians head coach Chad Moore said he respects the senior's need to stand and salute. It has been a tradition that the other Forest City players don't take the field as they are preparing for the game, Moore said.

For two minutes, Brice Golwitzer stands perfectly still and all alone on the sideline before each Forest City, Iowa, home football game.

The senior football player is doing what he believes honors the country he loves, and the military he recently joined.

Golwitzer went through basic combat training for the Army National Guard this summer, and says it is his duty to stand at attention and salute the American flag as "The Star Spangled Banner" is playing.

He first approached Forest City head football coach Chad Moore with his request to stand and salute at the Indians' game against Roland-Story on Sept. 11.

Golwitzer said Moore respected his decision and didn't stand in his way, saying he must do what he thought was right for him.

"It was on the anniversary of Sept. 11, so I wanted to go out and salute to honor all of the people who were in the middle of that tragedy," Golwitzer said. "I did it for them, not for me.

"I never had this much respect for the flag and the history. Basic training changes that."

Golwitzer plans to salute the flag when the national anthem is played before Forest City's home game on Friday night against Hampton in the first round of the Class 2A playoffs.

During that solemn moment, he'll salute all of those "past, present and future who have worn the boots."

"It's for all of those making the sacrifice to help keep our freedoms," he said. "Privileges are not something to be taken for granted."

Honor, duty and love of country and the flag is nothing new to Golwitzer, who comes from a military family.

His father was in the National Guard for 21 years and did two tours of active duty, one stateside and one overseas, said Golwitzer's mother, Serena. She said that has been instilled in her son.

"Being a military wife, and now a military mom, you understand these things," she said. "With him being out there, he has realized the military brotherhood has his back. I've received a lot of messages, and it is amazing how much support he has from veterans and this community."

One of those emails of support came from Jim Clarke, a Vietnam-era Marine Corps veteran who lives in Des Moines.

Clarke considers Golwitzer "an outstanding young man" for having the courage to stand alone on the sidelines and saluting the flag.

The veteran said he will make the drive from Des Moines on Friday to be in the stands when Golwitzer takes to the field for the national anthem. He said just like it's Golwitzer's duty to salute, it's his duty to support the young man.

"The courage of this young man to serve, but to also stand alone needs to be recognized," Clarke said. "I'm proud of Brice and I don't even know him. God bless him for what he is doing. His heart is in the right place."

For Moore, the decision was all Golwitzer's, despite the fact that the Forest City football team for years has not stood along the sidelines during the national anthem. That's when Moore is holding his pregame talk.

"Once Brice asked, I told him he had to do what he thought was right," said Moore, who also comes from a family of military, police and firefighters. "There was no hesitation. He needed to be outside to honor the flag. He's doing what he believes in and I respect him for that."

That respect goes both ways as Golwitzer said he knows the football team has been doing its pregame routine off the field his four years on the team and longer.

"I understand and respect his tradition," Golwitzer said. "He has his reasons for doing things that way and the team stands behind him."

Moore said that he is aware of the controversy in the community brought to light by Golwitzer being alone along the sideline during the pregame. He said it was never his intention for that to happen.

"This is the way our team feels helps us the most," Moore said. "I have to honor both requests. We have to take into account what the other 60 guys want. We do what is best for the team."

Jerry Smith is sports editor and special projects editor for the Globe Gazette. You can reach him at jerry.smith@globegazette.com or by phone at 641-421-0556.

Mr. Tufts Jr. is a cat the color of ink, and his fur is as soft as a cloud. Large copper eyes are filled with curiosity — and more than a little mischief. He's also a clone.

Another wind turbine blade breaks off in central Iowa

PATON, Iowa (AP) — For the second time in as many months, a huge blade has broken off from its wind turbine in central Iowa.

Attny: Iowa saying no to demands only emboldens ex-players

Forest City senior Brice Golwitzer stands at attention and salutes the flag during a home football game earlier in the season. Golwitzer says it's his duty to salute after joining the National Guard this past summer.

Forest City's head coach Chad Moore talks to his team after a win over Hampton-Dumont-CAL in 2019.

Brice Golwitzer is the only Forest City football player who takes the field during the playing of the national anthem. Indians head coach Chad Moore said he respects the senior's need to stand and salute. It has been a tradition that the other Forest City players don't take the field as they are preparing for the game, Moore said.