The story of how the Doomsday Clock began ticking 75 years ago, the brainchild of an Illinois artist
0 Comments
Share this
1 of 2 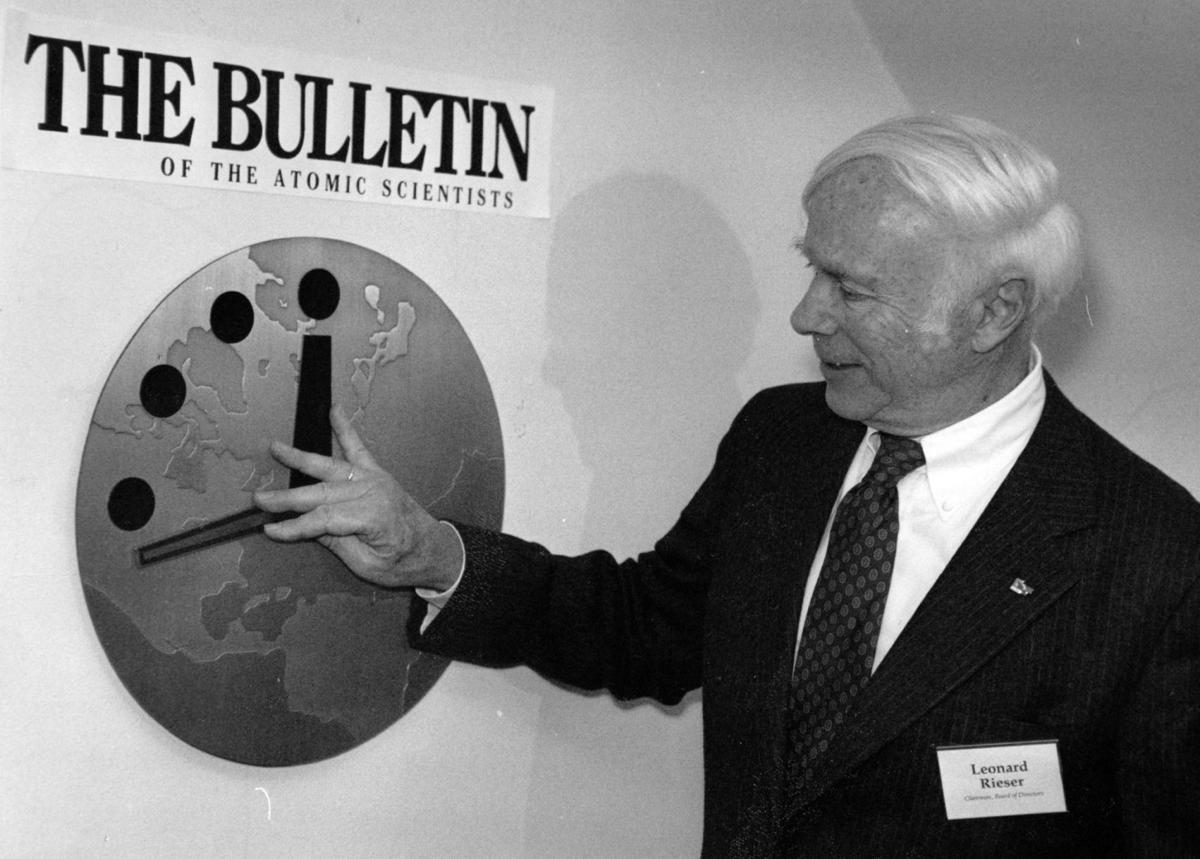 Dr. Leonard Rieser, Chairman of the Board of the Bulletin of the Atomic Scientists, moves the hand of the Doomsday Clock back to 17 minutes before midnight at offices near the University of Chicago on Nov. 26, 1991. 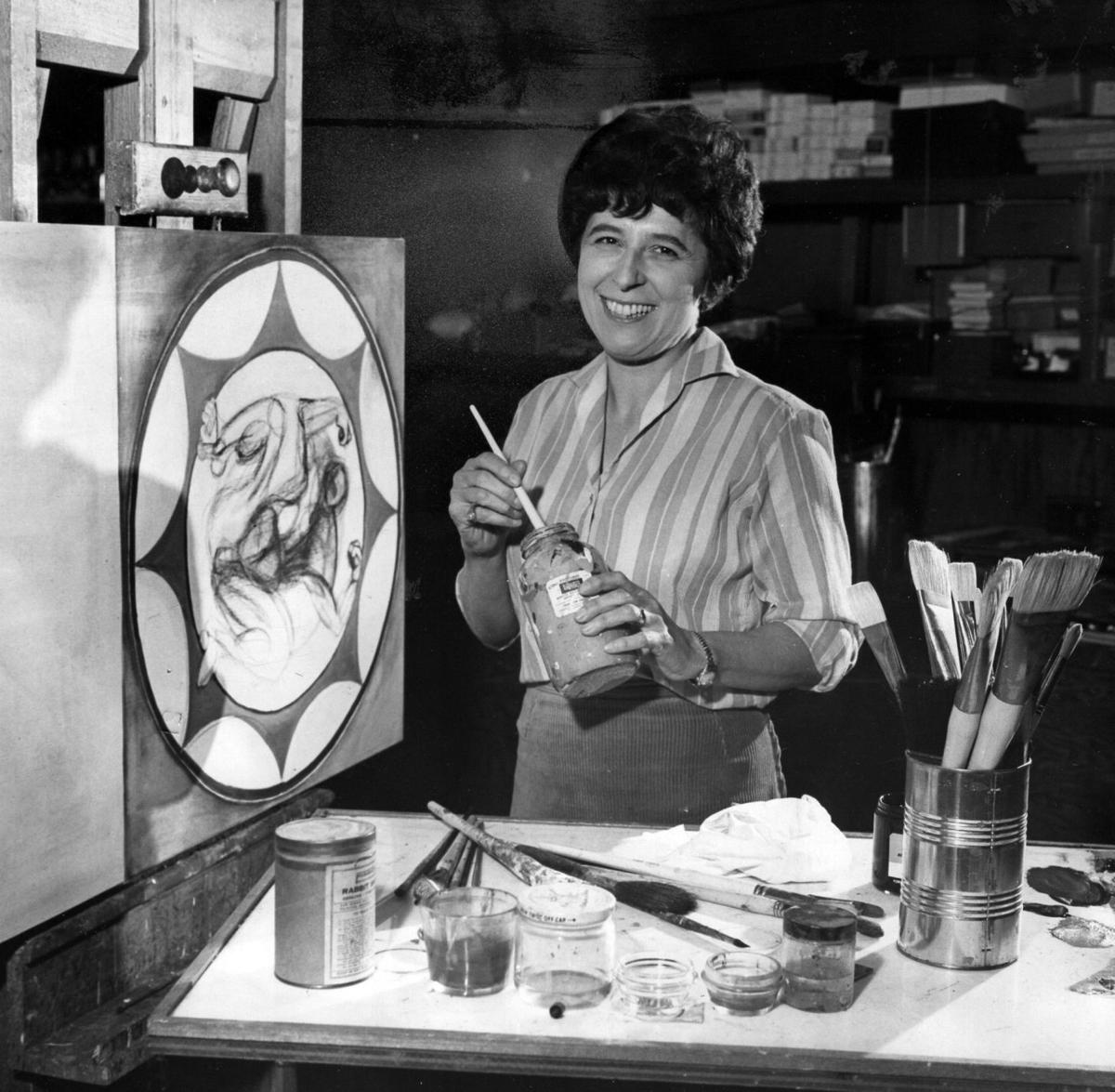 Martyl Langsdorf designed just one magazine cover, but it has had considerable staying power. A prolific painter of abstract and figurative canvases, she was commissioned 75 years ago by the scientists who built the atomic bomb that ended World War II. By 1947 the Cold War was on, and they wanted to alert Americans to the danger of a nuclear confrontation with the Soviet Union.

They hoped to “frighten men into rationality,” said Eugene Rabinowitch, a biologist and the first editor of the Bulletin of the Atomic Scientists.

To express that objective visually, Langsdorf played with various images.

“The most significant of all was a sketch of a clock, which I made on the 8-by-11-inch back of a bound copy of Beethoven’s Piano Sonatas,” she recalled. “A clock in white paint on the black binding of the Sonatas.”

A clock symbolizes urgency — and her Doomsday Clock did so emphatically by being stripped down to the essentials. A quarter section of a circle with the hours marked by dots, its long hand set at seven minutes to midnight. Its name is a riff on the biblical prophecy of the day the world will end.

In 1949, Rabinowitch advanced the clock’s big hand to three minutes before midnight. The government was downplaying a nuclear explosion detected in the Soviet Union, but Rabinowitch said, “The distant rumbling of the first Soviet atomic bomb shows the world well advanced toward the abyss of an atomic war.”

From then on, the Bulletin of the Atomic Scientists has annually announced if the Doomsday Clock has moved toward or away from disaster. This year’s “reveal” will be performed virtually on Jan. 20.

Robert Rosner hasn’t seen “Don’t Look Up,” Hollywood’s riff on a doomsday scenario about a pair of scientists who vainly alert the president to a comet headed smack at the Earth.

“I’ve run into that attitude of politicians too often,” said Rosner, outgoing chairman of the board that decides the long hand’s placement.

In a 2019 article in the fine art news magazine Art & Object, Charlotte Hecht wrote that the Doomsday Clock reflected the “crosscurrents of modernism, industry, and science that ran through the city at midcentury.” Modern European design had been transplanted to Chicago by the architect Mies van der Rohe, who proclaimed: “Less is more.”

Langsdorf came to Chicago in 1943, when her physicist husband was hired by the Manhattan Project, which conducted atom bomb experiments under the stands of the University of Chicago’s football field.

Langsdorf and her husband moved in an artistic and intellectual circle that included Mies’ daughter, an Art Institute curator. They lived in an apartment previously occupied by the physicist Edward Teller before he was transferred to Los Alamos, New Mexico, where the atomic bomb was to be tested.

Teller and others who worked on the Manhattan Project were racing to get such a formidable weapon before Adolf Hitler’s scientists did. They hadn’t time to consider if the bomb might be a two-edged sword. Its destructive power was only vaguely known.

As a graduate student, James Sturm worked on Enrico Fermi’s experiments under the football stadium.

“For Fermi’s final experiment, a ‘suicide squad’ of graduate students was positioned above stacks of uranium armed with bottles of a neutron absorbing sodium solution to be poured over the pile if it ran wild,” Sturm told the Tribune in 1992.

When a bomb was tested in 1945, its awesome power was revealed, and the Manhattan Project’s scientists wrestled with the thorny ethical issue of how it should be used.

About 150 of them signed petitions to President Harry Truman. They were based on a memorandum known as the Franck Report, from its chief author, James Franck, a German physicist who came to the U.S. when Hitler took power.

“Nuclear bombs cannot possibly remain a ‘secret weapon’ at the exclusive disposal of this country, for more than a few years,” the Franck Report asserted. “We believe that these considerations make the use of nuclear bombs for an early, unannounced attack against Japan inadvisable.”

Germany having surrendered, Japan was the remaining target for an atomic bomb. But if its power were demonstrated by dropping it on some barren island, the U.S. would have the moral authority to call for international control of atomic weapons.

Decades afterward, Howard Gest, who had signed the petition, wondered what Truman thought of it. After extensive research, Gest, an Indiana University professor, concluded the petitions never reached Truman.

Memoirs of Truman’s aides suggested they felt that, as he had decided to bomb Japan, he didn’t need to see the scientists’ petitions.

Gest found confirming evidence in the National Archives: “A 9-by-12-inch envelope, addressed by hand to the president, was torn open roughly,” an accompanying archivist’s note reported. Still inside was a page of signatures of the scientists’ petition.

After atomic bombs devastated Hiroshima and Nagasaki, killing 214,000 people, J. Robert Oppenheimer, who led the Manhattan Project, tried to make the scientists’ misgivings heard. In a White House meeting with Truman, he put the issue bluntly.

“Mr. President, I feel I have blood on my hands,” Oppenheimer said. That remark infuriated Truman, effectively ending the conversation. He told his staff he never wanted to see “that crybaby scientist " in his office ever again. Their exchange was reported in multiple books about whether the A-bomb should have been used.

The government had the scientists’ petitions stamped “Secret,” preempting any attempt to make them public. That convinced a group of Manhattan Project alums that they needed to take their case directly to the American people, and Langsdorf was hired to create an icon of their effort.

In 2021, her drawing accompanied the Bulletin of the Atomic Scientists online announcement that the clock was set to 100 seconds before midnight.

“Humanity continues to face two simultaneous existential dangers — nuclear war and climate change — that are compounded by a threat multiplier; the continuing corruption of the information ecosphere on which democracy and public decision-making depend,” the editors explained.

In 2007, they had added non-nuclear factors, such as global warming and genetic engineering, to their list of threats to civilization. A Tribune editorial proclaimed this to be “Doomsday Creep,” noting those problems “don’t have anyone scurrying under the desk.”

Even so, the magazine continues to use a broad category of issues when it determines the setting of the Doomsday Clock’s minute hand. The clock itself has long since traveled far and wide.

“The clock has a life of its own now,” Langsdorf said in a 2007 interview.

The Doomsday Clock is heard in the lyrics of Pink Floyd’s 1983 recording “Two Suns in the Sunset.” A foreboding clock appears in the background of Sting’s 1985 music video for the song “Russians.”

It was featured in Yael Bartana’s play “What if Women Ruled the World” and in episodes of the TV series “Madame President” and “Criminal Minds.”

The virtual gift shop of the Bulletin of the Atomic Scientists offers Doomsday T-shirts, face masks and coffee mugs.

Langsdorf’s paintings were acquired by the National Museum of American Art, the Hirshhorn Museum, the St. Louis Art Museum and the National Gallery of Art.

Yet until her death in 2013 at 96, people who met her would often say: “You’re the one who created the famous clock.” She would be asked what evidence led her to set it at seven minutes to midnight.

Her inspiration was aesthetic not scientific, according to the website of the Bulletin of the Atomic Scientists.

“It seemed the right time on the page,” Langsdorf said. “It suited my eye.”

If you looked at the temperature of space, what would you get?

If you looked at the temperature of space, what would you get?

Authorities have been searching for a suburban Chicago inmate who was allowed to leave jail to attend a family member's funeral but did not return.

Couple who got $105,000 bill from Chicago Public Schools over residency dispute fights back in court

A family is fighting a $105,000 tuition bill from Chicago Public Schools after the district determined three of the children did not live in the city while attending selective enrollment schools. The CPS inspector general’s office called the case “especially egregious” in its recent annual report.

Ex-Chicago officer who killed Laquan McDonald to be released

Jason Van Dyke is set to be released from prison next month after serving less than half of the 81-month sentence imposed three years ago.

"Can you imagine waking up next to her every day? Oh, my God!" the judge said, before apparently realizing his remarks were being broadcast live on YouTube.

Dr. Leonard Rieser, Chairman of the Board of the Bulletin of the Atomic Scientists, moves the hand of the Doomsday Clock back to 17 minutes before midnight at offices near the University of Chicago on Nov. 26, 1991.