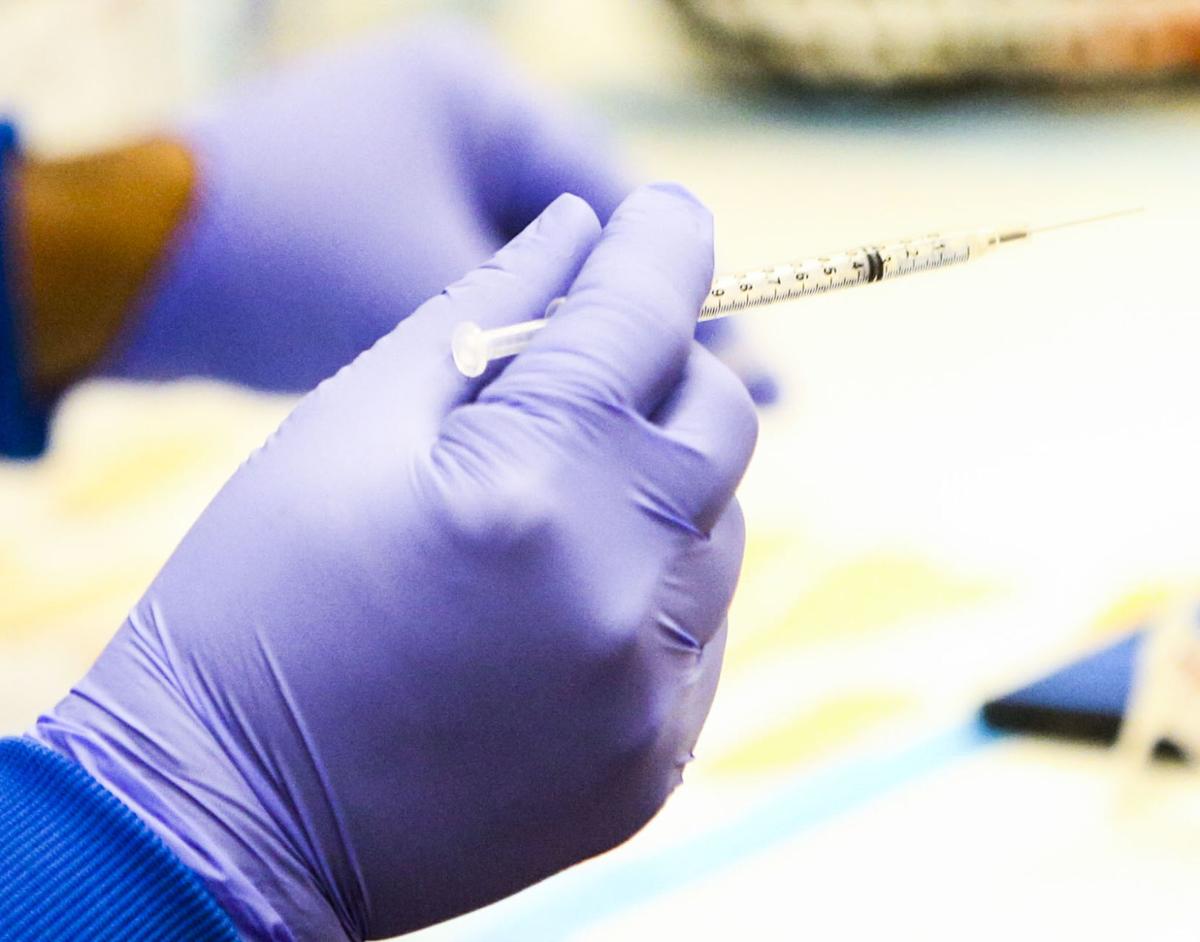 A nurse prepares to give a COVID vaccine shot at a mass vaccination clinic in the Camden Centre. 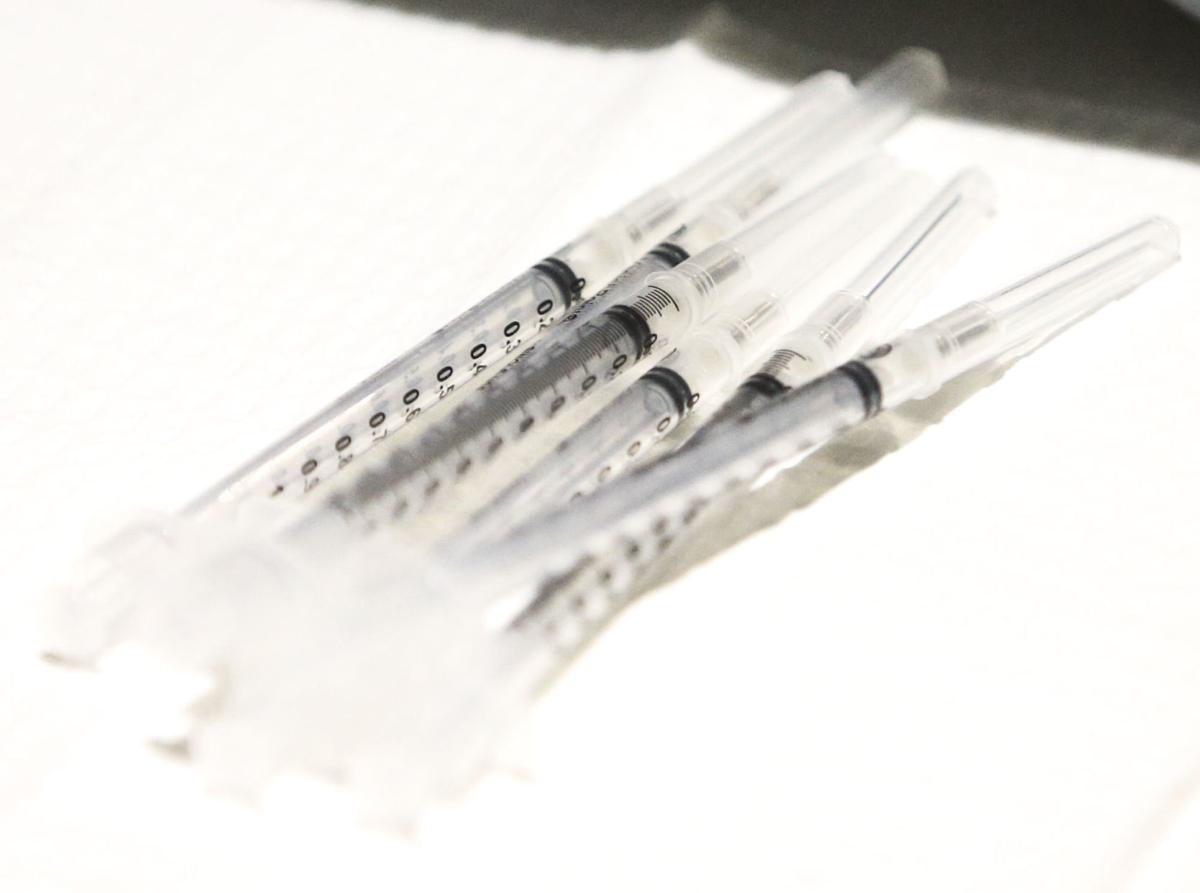 COVID vaccines at a mass vaccination clinic in the Camden Centre, in Milan on March 26.

The COVID-19 race is on in the Quad-Cities.

It's a contest that pits the rising test positivity rates in both Rock Island County and Scott County against the public health effort to vaccinate as many people as possible as quickly as possible.

The positivity rate in Scott County reached 11% Wednesday and remained at least double what it was in the middle of March.

Rock Island County's positivity rate remained roughly half that of Scott County at 4.4% on March 31 — but that was a 1.3% percentage point increase in seven days.

The statistics that deeply troubled public health officials were the number of people hospitalized with severe symptoms of COVID-19 jumped to 19 in Rock Island County and 22 at Genesis Health System.

The Iowa Department of Public Health announced 60 new COVID-19 cases in Scott County, raising the county's total number of cases to 19,513 since the start of the pandemic.

There are 227 deaths linked to virus in Scott County.

Once again, the positivity rate was on the rise in the Q-C. Scott County checked in at 11% — with 306 new cases over the course of the past seven days.

The positivity rate in Rock Island County was last reported March 20 at 4.6%.

Thursday's news was the same as the news from the start of the week — new cases are on the rise, as Scott County reported 117 and Rock Island County reported another 47.

The crucial test positivity rates reflect the rise in new cases. Scott County has been between 9% and 11% this week, settling at 10% Thursday. That rate is more than twice the 4.8% rate throughout all of Iowa.

Reported every two weeks by the Illinois Department of Public Health, Rock Island's positivity rate checked in at 4.6% after spending nearly a month below 3%.

The positivity rate is on the rise at Genesis Health Systems. After checking in at 7.95% Wednesday, Thursday's rate jumped to 9.75%.

As predicted by the numbers, hospitalizations are climbing. By the end of February, Genesis' count of patients with severe COVID-19 symptoms was down into single digits. Rock Island County's COVID-19 patient count fell to between nine and 11.

One day after reporting 22 patients with severe symptoms of the virus, Genesis reported 24 patients Thursday. There were 19 Rock Island County residents hospitalized with COVID-19.

The day's COVID-19 news brought word of funding for local and area schools on the Illinois side of the Mississippi River.

Illinois' K-12 school districts will get $7 billion in federal funding over three years to help students excel as they return to the classroom after a year of remote and hybrid learning, Gov. JB Pritzker announced Wednesday.

The Rock Island-Milan School District will get the biggest award among Quad-Cities area districts, more than $35 million dollars. Moline-Coal Valley will receive about $26.3 million, and East Moline will receive $16 million.

Schools in rural Rock Island, Henry and Mercer counties will also get an infusion of cash.

As early as Tuesday it was clear COVID-19 is making a comeback in the Q-C.

Scott County's most troubling statistic is the test positivity rate, which stood at 11% Tuesday. In mid-March that number hovered between 3% and 4%, but by last Friday ballooned to 10%.

Rock Island County's positivity rate jumped to 4.6% this week after falling to a low of 2.6% just 10 days ago.

Rock Island Health Department officials made the biggest COVID-19-related announcement of the week Monday, telling residents everyone 16 and older were now eligible to receive one of the three available vaccines.

"The case numbers are going up," Hill said. "The positivity rate is up. We are are seeing more hospitalizations. We are trying everything we can to stay ahead of what could become an avalanche of new cases."

Individual COVID-19 cases in Scott County totaled 17,902 since the start of the pandemic.

Watch now: What if mosquitoes could spread vaccines?

Nearly eight months after a boating crash in LeClaire killed two people, few details have been revealed by the agency investigating the crash,…

Former Republican Illinois U.S. Rep. Bobby Schilling, who represented the Quad-Cities, died Tuesday from cancer, according to his son.

A Moline High School teacher is on leave after allegedly sharing a homemade sex video on SnapChat in November, where it was seen by multiple s…

A Rock Island attorney was sentenced to 60 months probation Tuesday for possession of a controlled substance and methamphetamine delivery.

Woman with world's longest nails cuts them after nearly 30 years

The Texan who had the world's longest nails grown by a woman can finally open a door without fear after cutting them.

A nurse prepares to give a COVID vaccine shot at a mass vaccination clinic in the Camden Centre.

COVID vaccines at a mass vaccination clinic in the Camden Centre, in Milan on March 26.