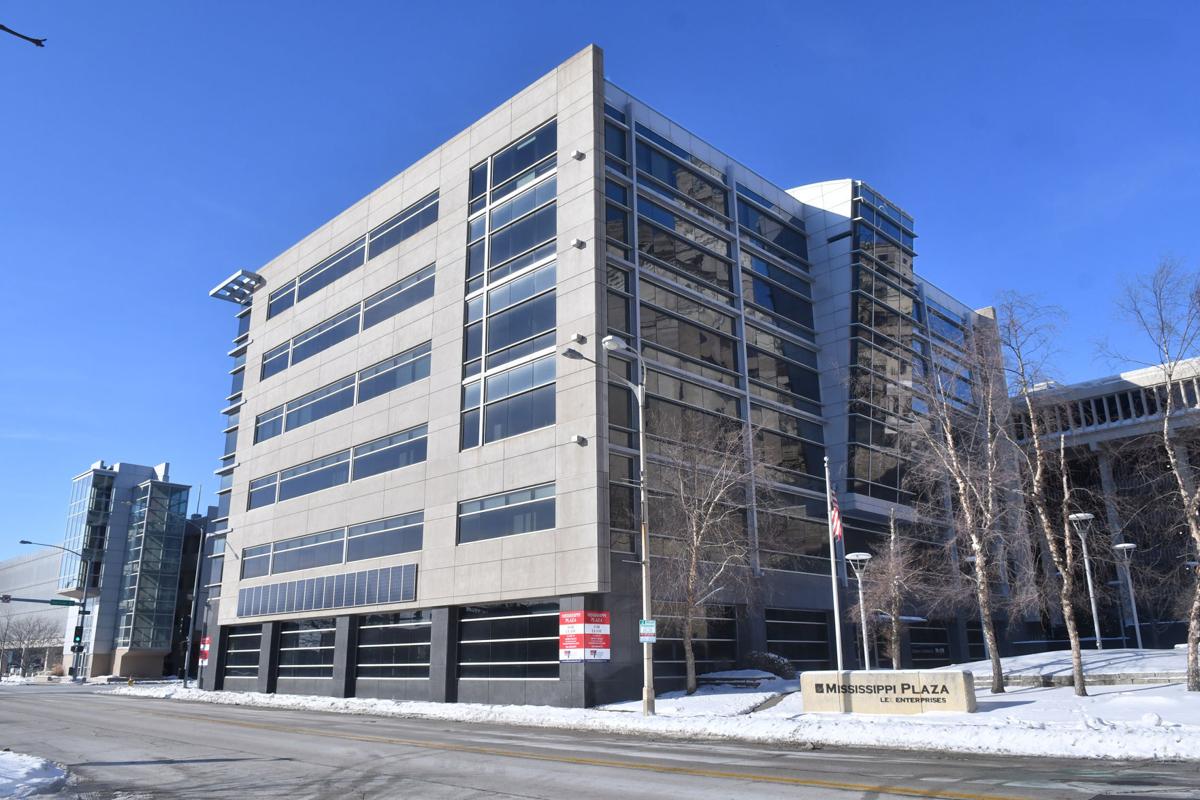 DivvyDose is adding office space in the Mississippi Plaza building on second street in downtown Davenport in addition to space in Moline. 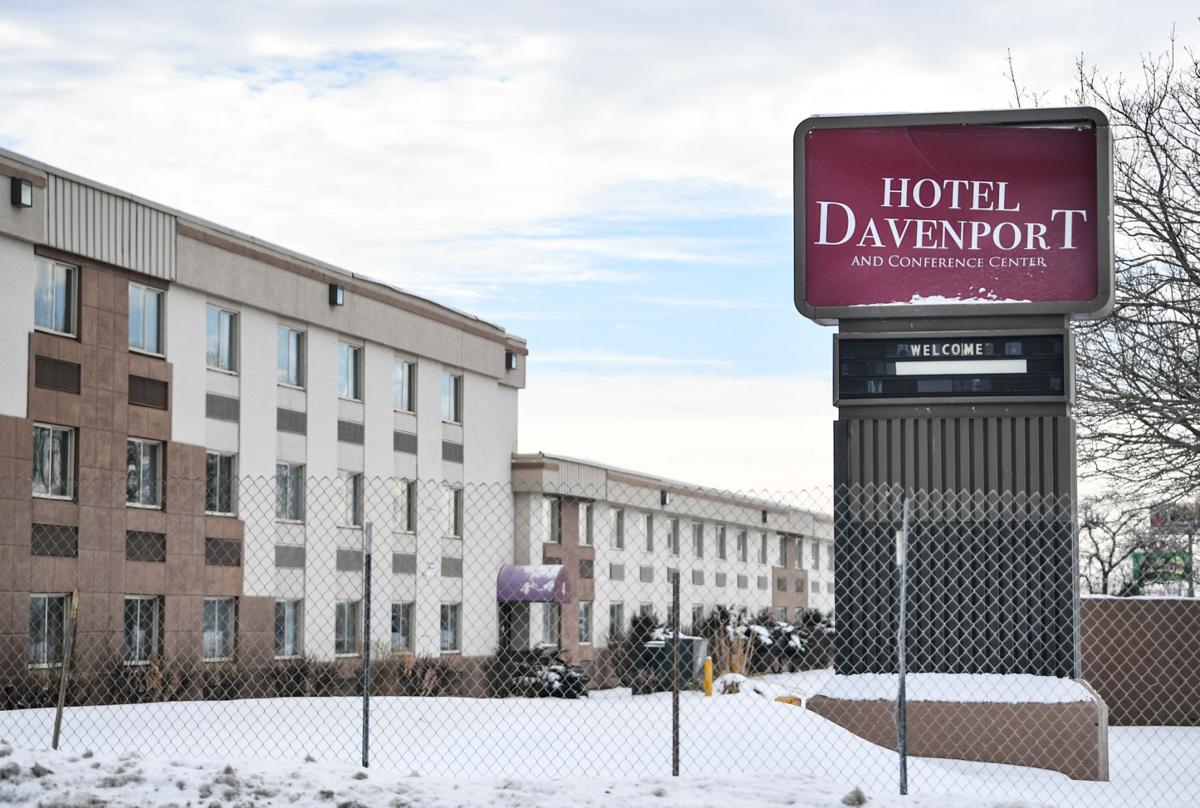 The former Hotel Davenport at 5202 Brady Street Thursday, Feb. 11, 2021, in Davenport. The former hotel is in the process of being demolished.

Thumbs Up ... to the announcement by divvyDOSE, the direct-to-consumer medication company, that it is adding 200 to 300 jobs in the Quad-Cities. The company, which was launched by physician Arvind Movva and purchased by UnitedHealth Group last fall, is headquartered in Moline. It's also rapidly expanding.

The company said it is moving its front-end operations to two floors in the Mississippi Plaza in downtown Davenport. Its back-end operations, mostly packaging and dispensing functions, will remain in Moline, at its location near John Deere Road.

This is a big boost not just for the Quad-City economy, but for downtown Davenport. It not only adds jobs, but it also fills space in a major office building downtown. The building once housed RSM McGladrey and Lee Enterprises, the parent company of this newspaper, which moved to East 53rd Street two years ago.

In an article in this newspaper this week, Bruce Berger, economic development director for the City of Davenport said, "Having that many jobs moving into a building that has been (mostly) vacant" is a great success story that supports a more vibrant downtown.

We agree, and we're thrilled at the addition to the city's downtown.

Thumbs Down ... to the decision to oust Chicago-based U.S. Attorney John Lausch by the end of the month. The Biden administration announced Tuesday it is moving to replace current U.S. attorneys with appointments of its own.

This is not unusual. All administrations, no matter the party, move to install their own selections when they enter office. But in this case, there is bi-partisan consensus in Illinois that Lausch shouldn't be shown the door so soon. He's played a vital role investigating corruption in the state, including the Commonwealth Edison probe that implicated former House Speaker Mike Madigan. Madigan has denied wrongdoing.

Lausch's work is of vital interest across the state.

Republicans have criticized the move to replace Lausch, but Democrats also objected.

U.S. Sens. Dick Durbin and Tammy Duckworth, both Democrats, said they  weren't consulted, and they urged Biden to retain Lausch until his successor is confirmed.

The senators noted that even though former President Trump "abruptly terminated" his predecessor, there is precedent for U.S. attorneys to remain in office in order to conclude investigations. He was confirmed unanimously and is widely praised for his work in a state that badly needs prosecutors who can root out wrongdoing.

We hope the president is listening.

Thumbs Up ... to St. Ambrose University's introduction this week of Amy C. Novak, who has been hired to be its new president. She'll succeed Sister Joan Lescinski, who announced her retirement last year. Novak will become the university's 14th president in August. She currently is president of Dakota Wesleyan University in Mitchell, South Dakota, a post she's held since 2013.

We're told Novak is a leader in the use of technology in education and that she led two successful fundraising campaigns at Dakota Wesleyan, raising nearly $60 million to support new physical infrastructure, as well as endowed chairs and scholarships.

The Quad-Cities has been fortunate in the people who have led St. Ambrose, and we're looking forward to Novak taking on her new role this summer. We offer our welcome to the community and our best wishes.

Thumbs Up ... to Rock Island firefighters who helped an older couple to safety Monday night while responding to a chimney fire in the 2200 block of 30th Street. When they arrived about 9 p.m., firefighters saw flames coming out of the chimney, but they were able to keep the fire from spreading to the rest of the house.

Fire Marshal Greg Marty also had a timely reminder for this time of year. He urged that homeowners get their chimneys cleaned regularly to prevent a buildup of creosote, which can lead to fires.

Thumbs Up ... to the news that the former Hotel Davenport and Conference Center, 5202 Brady St., will be coming down this spring. The hotel has been vacant for three years.

As Tom Barton of this newspaper wrote: "Over that time the building has deteriorated and reached the point where city officials last fall issued notices to the owner stating the building needed to either be substantially rehabbed or demolished."

The property had received a number of fire, safety and health code violations.

Built in the 1970s, the building occupies a high-profile corner of Davenport, and over the years it has hosted a range of community events, along with being a hotel.

The property has gone through a number of ownership changes over the years. However, it's clear its time has passed.

Barton reported that the property owner, Alex Patel, said he has no firm plans for the site at the moment.

We are hopeful that this corner can be redeveloped. It qualifies for a range of incentives, and city officials have been working with the owner on possible future uses.

Editorial: It's time to step up

Unfortunately, the people of Davenport have become accustomed to gunfire. Still, the reports that early Sunday nearly 80 shots were fired down…

Thumbs Up ... to the reopening of Winnie's Place, which provides transitional housing and other services for women. Winnie's Place shut down l…

You can't say you weren't warned.

Editorial: A step toward cleaner water

Thumbs Up …. to Ascentra Credit Union, which gifted its former central Davenport branch building at 122 E. 15th St., to the Hilltop Campus Vil…

By all appearances, plans for a new 40-bed Juvenile Detention Center in Scott County are falling into place.

Editorial: Preparing for the future

A lot has changed in the nearly 50 years since NorthPark Mall opened.

Over the past week, Quad-Citians saw a bipartisan commitment to politics as usual. They shouldn’t be happy about it.

From the Herald & Review editorial board: "With each succeeding detail, the story of Champaign police officer Chris Oberheim's death became more tragic."

DivvyDose is adding office space in the Mississippi Plaza building on second street in downtown Davenport in addition to space in Moline.

The former Hotel Davenport at 5202 Brady Street Thursday, Feb. 11, 2021, in Davenport. The former hotel is in the process of being demolished.