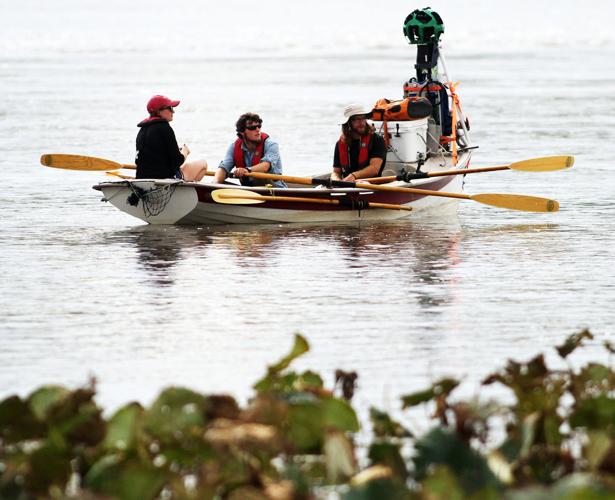 OAR Northwest participants Audra Tromly of Denver, Sam Friedman of Portland, Oregon, and Eric Nathanson of Portland, Maine row their 17-foot rowboat down the Mississippi River as they conduct experiments. They are also speaking to some 4,000 school children on their expedition, to last 100 days.

Rowers Audra Tromly of Denver, Sam Friedman of Portland, Oregon, and Eric Mathanson of Portland, Maine direct their 17-foot rowboat down the Mississippi River before they land at Lindsay Marina, Davenport, on Oct. 1. The OAR Northwest team conducted experiments and also spoke to children in four Quad-City schools during the trip. 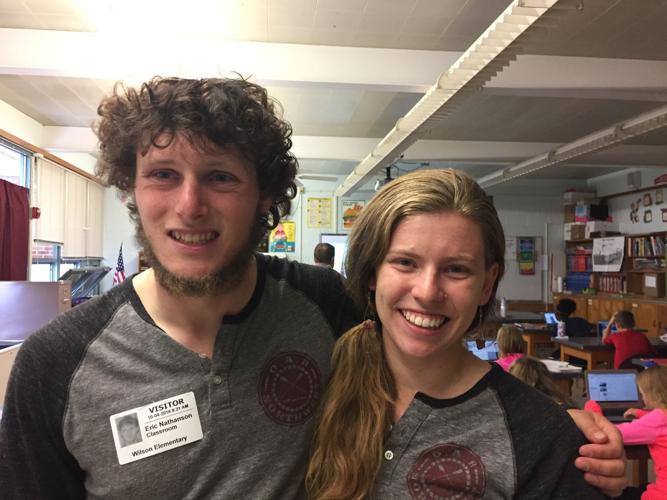 Eric Nathanson, left and Calli Vasatka visited Wilson Elementary School, Davenport, to talk about their trip on the length of the Mississippi River. 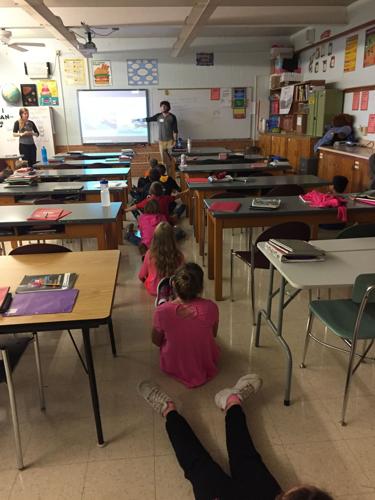 Students in Mike Ross' class at Wilson Elementary School, Davenport, learn how to row correctly by sitting on the floor of their classroom. They are directed by two people who are on a team, rowing down the length of the Mississippi River.

Fifth-grade students in Mike Ross' class lasted about 15 minutes before they erupted with questions for Eric Nathanson and Calli Vasatka, a duo rowing boats the length of the Mississippi River.

"Did you go down any water falls?"

"What's the difference between your canoes and your rowboats?"

"Where do you go to the bathroom?"

Students watched in lively interest as the recent college graduates used a PowerPoint to show how, and why, they are travelling 2,320 miles from Minnesota to Louisiana.

Nathanson, 22, of Portland, Maine, and Vasatka, 22, of Seattle, are part of an eight-person contingent from the University of Puget Sound, Tacoma, Washington.

The team is organized by Greg Spooner and Jordan Hanssen, who set a world record rowing across the Atlantic Ocean in 2006. The men later founded OAR Northwest in an effort to boost adventure education in classrooms, kindergarten through 12th grades.

Ross, the Wilson educator, has 28 children in a master's reading class, which, he said, includes topics such as current events.

Nathanson, from Maine, said he got interested in backpacking and rock climbing while in high school, and joined the Outdoors Club in college. This trip "is a bigger adventure than I've ever been on."

Vasatka, from the Seattle suburbs, spent her youth ski racing and joined the rowing team in college. She was approached by Hanssen and thought of the trip as an "opportunity of a lifetime."

This is Vasatka's first trip to the Midwest, and she is impressed by the thunderstorms she's seen since she got on the river at Lake Itasca, Minn.

"We constantly watch the weather," she said.

The youngsters peppered questions to Nathanson and Vasatka. To wit:

Did you go over waterfalls?

"No," is the short answer, but Vasatka explained the river did have treacherous rapids and falls but those have been replaced by the lock-and-dam system.

The 17-foot rowboats were designed for the ocean and based on boat designs from long ago, when boats were a major form of transportation in the U.S. "They are very stable boats," Nathanson said.

What are the locks?

That question was answered by another student, Alexis Willet, who said the Mississippi's lock-and-dam system evens out the water for the boats. "It's like an elevator for a boat," Vasatka said.

Do you ever get lost?

No, it's pretty straight-forward, Vasatka said, noting the canoes were helpful north of Minneapolis, as the river is narrower than in Davenport. Plus, there are many wild rice pads, which makes it necessary to portage canoes in some places.

The expedition's two canoes were left in Minneapolis when the team got on rowboats.

What's the difference between rowboats and canoes?

For this, the team asked the students to sit on the floor by their desks. Vasatka then demonstrated how to properly row a boat, using core muscles and her legs.

Canoes are easier to maneuver in shallow waters, such as in northern Minnesota where the river starts. The rowboats are bigger boats and very stable, more useful for the lock-and-dam system south of Minneapolis.

"There are pros and cons to both boats," Vasatka said.

When do you travel?

The team camps on sand bars, islands, or in marinas if one is available. They do not have a tent, but they use a tarp-like "twing" shelter to keep off the rain, and have covers for their sleeping bags that repel both water and bugs. The trip is to last 100 days.

What else do you do?

The rowing team takes scientific samples, in research projects for scientists at Louisiana State University in Baton Rouge, the University of Washington, and for their alma mater, Puget Sound.

They test for chemicals or bacteria in the water samples and also for tiny bits of plastic, which they scoop up with a net behind the boat.

These very small particles are eaten by birds, fish and wildlife and will eventually kill them, Nathanson said.

There is little or no research on plastics in river water; this study is the first major one, he said. Most of the emphasis to date has been on ocean waters.

Have you caught any fish in that net?

No, Vasatka said, not so far. Fish seem to stay out of the way.

What do you eat?

There is oatmeal with various toppings for breakfast every day, Vasatka said. Lunch is sandwiches, jerky, granola bars and trail mix, and they eat a couple of blocks of cheese. "We need to eat a lot because we exercise so much each day."

Fresh foods are a treat and had to be eaten quickly in hot weather.

Is the water cleaner in Minnesota than in Iowa?

There is more turbidity, or sand and mud, in Iowa waters, but not a difference in terms of litter or trash. The team members noted effects of flooding in the immediate area, which adds to the amount of particles in the water.

Why did you do this trip?

It was a way to challenge himself, Nathanson said. He loves the outdoors and nature and to work in a team setting. The science behind the tests adds meaning to the trip.

The boats rely on human power, and that's what attracted Vasatka, who also talked about interesting conversations she's had with other boaters who stop and talk to the team. "It seemed like an opportunity I couldn't pass up," she said.

Do you take bathroom breaks?

Special cups on the boat are generally used. When it's necessary, the team gets out of the boats on land and covers their waste in sand or dirt, away from public areas.

How do you keep in touch with your family?

There is no cell phone service in Iowa for Vasatka's phone, so she uses a teammate's to call her mother, once a week. Nathanson said they do use the phones to keep in touch, get email messages, and the like.

For example, they make arrangements with local schools for the presentations, and speak to scientists at the participating universities. There is a hefty battery they carry along to recharge the phones.

Did you get sick?

Nathanson got cellulitis in his elbow to make it swell to twice its size. He went to a doctor to get antibiotics to treat that. A teammate got a thorn in his foot.

Do you ever race the boats?

We did once, Nathanson said. They also listen to music, sometimes.

Do you play video games?

Not on this amazing trip, Nathanson said. There is ample time to observe nature, and natural happenings, Vastaka said, speaking of how they watched a squirrel swim across the river in Minneapolis.

Do you get out and swim?

Yes, sometimes, Vasatka said. North of Minneapolis, there are no locks-and-dams, and the river is recreational in nature.

"It gets more commercial as we travel south," Nathanson said, adding the commerce will be even more evident as they approach New Orleans and the mouth of the Mississippi.

How do you get started?

The rowers gave the children advice on how to start, if they are interested in the outdoors. They both noted the class members are eight or so years away from doing some of the adult activities.

But when they ask Ross' class if anyone would be interested, someday, in travelling the river, some hands shot up.

"I would love to do this. I love the outdoors and the river," Tyreek Davis said.

The team is about halfway done, completing 1,000 of the 2,320-mile journey. They plan to end on Thanksgiving Day.

The OAR Northwest team out of the University of Puget Sound in Tacoma, Wash., has a special Google Trekker on one rowboat.

The expedition is on canoes and rowboats for the entire 2,320-mile length of the Mississippi River. They passed through Davenport Oct. 1-5.

The Trekker is a camera/computer hard drive system that will feed the photos into Google Earth, and add to the offerings on Google StreetView. The expedition is a partner with Google.

There are actually about 15 cameras in the device, and it is mounted on a scaffold on top of the rowboat.

Eric Nathanson, one of the team members, said photos are sent, periodically, to Google to map the entire length of the river.

This is a quest for Google, and has been done in many parts of the world, he said. Similar projects: Grand Canyon, Mount Everest, on a camel in the Sahara Desert and on sheep in the Faroe Islands, near Scotland.

OAR Northwest participants Audra Tromly of Denver, Sam Friedman of Portland, Oregon, and Eric Nathanson of Portland, Maine row their 17-foot rowboat down the Mississippi River as they conduct experiments. They are also speaking to some 4,000 school children on their expedition, to last 100 days.

Rowers Audra Tromly of Denver, Sam Friedman of Portland, Oregon, and Eric Mathanson of Portland, Maine direct their 17-foot rowboat down the Mississippi River before they land at Lindsay Marina, Davenport, on Oct. 1. The OAR Northwest team conducted experiments and also spoke to children in four Quad-City schools during the trip.

Eric Nathanson, left and Calli Vasatka visited Wilson Elementary School, Davenport, to talk about their trip on the length of the Mississippi River.

Students in Mike Ross' class at Wilson Elementary School, Davenport, learn how to row correctly by sitting on the floor of their classroom. They are directed by two people who are on a team, rowing down the length of the Mississippi River.