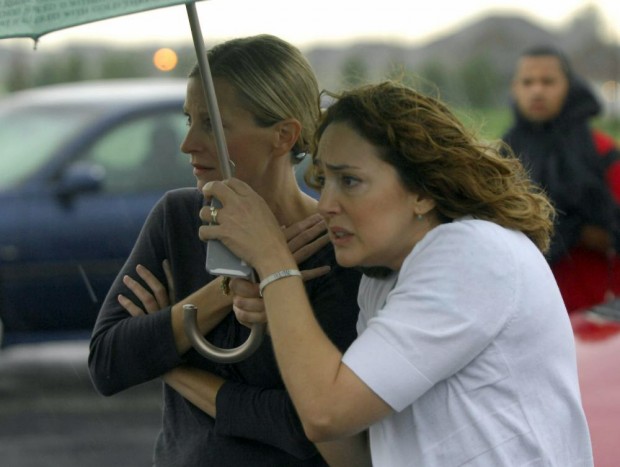 Parents wait in the rain outside Normal Community High School to learn of the safety of their children after gunfire led to a lockdown Friday, Sept. 7, 2012.  (The Pantagraph/David Proeber) 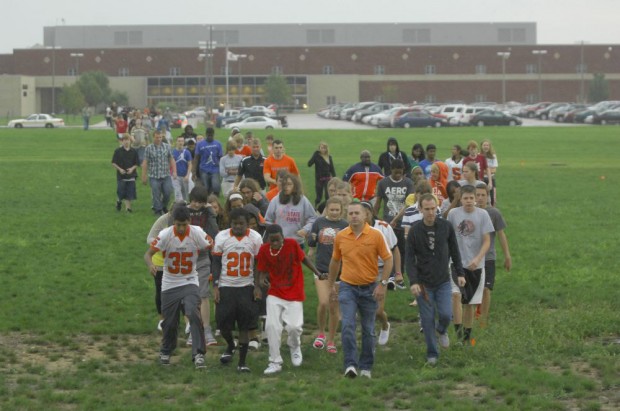 A Normal Community High School teacher leads students toward Eastview Christian Church after an incident at the school Friday, Sept. 7, 2012. (The Pantagraph/David Proeber)

NORMAL, Ill. — A 14-year-old student is in custody in connection with shots fired into a ceiling Friday morning at Normal (Illinois) Community High School, or NCHS, which remains on lockdown while police investigate the incident.

Parents are asked to come to nearby Eastview Christian Church to pick up their children. Eastivew is being called the “reunification” site for parents, who must sign their students out before they can take them home.

Additional details will be released at a press conference at 1:30 p.m. at the Unit 5 administrative offices, 1809 W. Hovey Ave., Normal.

A small group of students who witnessed the incident in a freshman classroom were being questioned by police.

A parent of one of those students told her father a student came into their classroom and fired shots into the ceiling.

Another parent, Laura McBride, said, “My son texted me or I would have lost it.” She was one of hundreds of parents at Eastview waiting approval to take their kids home.

McBride, whose son is a sophomore, works in the public defender’s office and goes through court-house security every day. She wants to see metal detectors and increased security at the school.

“No one in that courthouse is more important than my children.” she said.

A message to parents on the NCHS website from Unit 5 Superintendent Gary Niehaus confirmed that “all students are safe, as that is always our number one priority.”

“We are working with Normal Police Department and more details of this very troubling incident will be available later today,” said the message that added there has been “no other threat to any other school” and that those schools “are experiencing a normal school day.”

After the lockdown was put into place, students were staying in their classrooms until police began allowing them to leave around 9 a.m.

Parents wait in the rain outside Normal Community High School to learn of the safety of their children after gunfire led to a lockdown Friday, Sept. 7, 2012.  (The Pantagraph/David Proeber)

A Normal Community High School teacher leads students toward Eastview Christian Church after an incident at the school Friday, Sept. 7, 2012. (The Pantagraph/David Proeber)