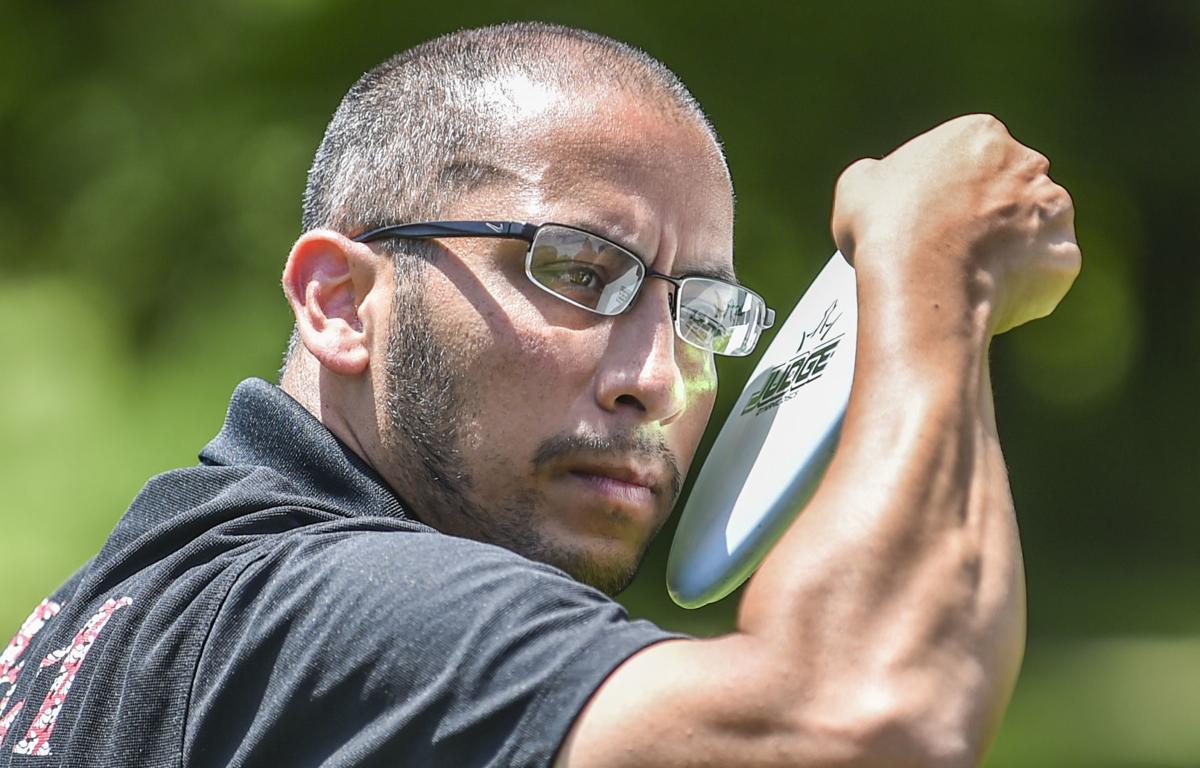 David Casas, a Muscatine High School graduate and current Davenport resident, has won four straight amateur disc golf titles, returning to the sport with a bang after missing a year due to injury. 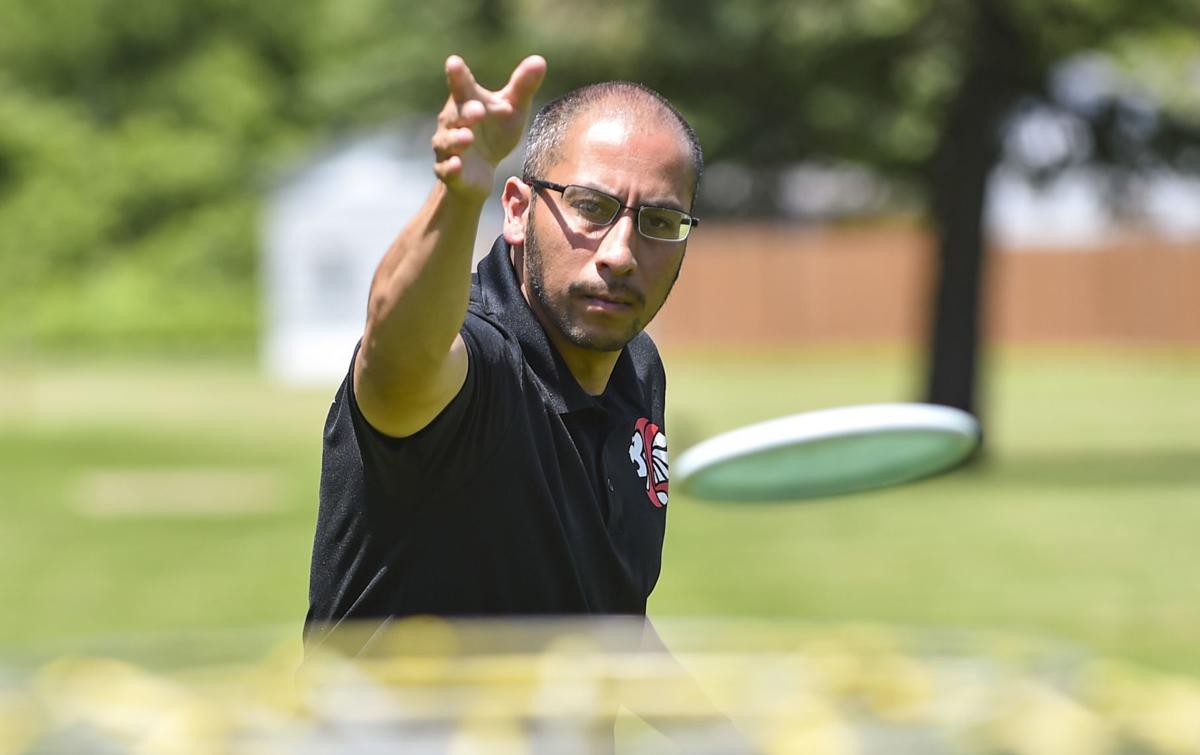 David Casas practices disc golf Thursday at Eastern Avenue Park. Casas, who is a professional magician, has been playing disc golf since 2012.

From magic to disc golf, David Casas puts his all into his passions.

Casas is on an impressive run of disc golf wins, winning four straight amateur tournaments this season, including the Discraft Ledgestone Insurance Open two weeks ago in Eureka, Illinois.

"I can't believe it still," Casas said. "I think, finally, all these years of practicing is finally coming around. Everything is clicking."

"I didn’t even know what it was. I would see the baskets at the park and wasn’t sure what it was," he said. "I started playing with a couple local friends here and I would borrow some discs because I didn’t have any. Every time we’d go out, me just being a competitor, I’d get closer and closer to beating them so that drove me."

Growing up in Muscatine, Casas had always been active. He played baseball, basketball and soccer, but hadn't really played any sports competitively since high school. Disc golf scratched that itch, and he found himself entering in tournaments by the spring of 2013.

"Sports have always been a big part of my life, but getting back into that competition, I forgot how much I enjoyed it and I missed it," said Casas, who now lives in Davenport. "So I found out this is my new sport and I fell in love with it."

Casas played in 17 tournaments in 2013, winning at two intermediate divisions and earning a fifth-place finish in an advanced division at the Iron Lion Open in August of that year.

He sought out coaching from some local pros, including Ben Callaway, who quickly noticed the drive behind the novice player.

"He definitely didn't have as much skill at first, but one thing I did notice about him was his passion for it," said Callaway, who has also enjoyed recent success, winning the Open Division at the Des Moines Challenge in May, the same event Casas won in the Amateur Masters 40+ Division. "That's what turned me to David in the first place was just how excited he was to go out and throw and wanted to play that much more and get better at it."

Disc golf is not the first field Casas poured his passion into. He's also been a magician for over 20 years, Las Vegas-trained and with shows across the Midwest. There's not much overlap in the skills required for either field, but Casas sees one thing the two have in common.

"The work ethic, it just goes together perfectly," he said. "The hard work, the discipline, the dedication I used in my magic, I applied it to disc golf. People will always tease me, saying 'Oh, you're using magic to get the Frisbees in the basket.'"

Is there any worry about him dropping the magic for a career in disc golf?

"That's a tough one, because I love them both," he said. "But (I'd probably pick) magic because it pays more. But that's my first love, so I enjoy entertaining but it's pretty close."

However, his progression was halted last year when Casas suffered a Grade 3 mid-foot sprain in his right foot — his plant foot for disc golf — playing racquetball.

It sidelined Casas for the entire season and he let his pro status expire. Instead, he renewed his membership with the Professional Disc Golf Association as an amateur. He didn't start playing again until April, but he's returned to the game with a bang.

Casas has won four straight Tier A events in the Amateur Masters 40+ Division, winning events in Moline, Des Moines, Kansas City and most recently in Eureka.

Despite the success, Casas isn't quite ready to move back up to the professional ranks. He's still going to physical therapy once a week and he feels close to 100 percent, but doesn't want to rush back.

"Even though I'm having a great season, I'm playing well, feeling well, sometimes in the middle of a round or when I'm done, my foot gets a little inflamed, I have to ice it and I'm limping a little bit," he said. "To compete at that pro level, you have to be 100 percent."

Now with a greater hunger, Casas has set his sights high for the future.

Disc golfers are given a rating based on their performances and Casas currently owns a 965 rating, his highest ever. The top-ranked pro golfer in North America, Richard Wysocki, has a rating of 1,050.

One of Casas' long-term goals is to receive a rating of 1,000, as well as win either the Amateur Worlds or the Professional Worlds.

He also has some short-term goals.

Casas is currently sponsored by Iron Lion Disc Golf Supply, a Moline store owned by Chase Roberts and Jessica Argyle. He'd like to land an additional sponsorship with a national company like Discraft or Innova.

But right now, he's mainly focused on continuing to heal, happy to be back playing the sport he fell in love with seven years ago.

"There's been a lot of sacrifice and a lot of hard work to get back to the level where I want to be," he said. "I just had this mindset that I was going to come back this year and rock it out. I have been fortunate that my hard work has paid off this far."

NFL Futures: Sleepers In the West

NFL Futures: Sleepers In the West

Professional disc golfers will once again swarm the Quad-Cities in 2021.

David Casas, a Muscatine High School graduate and current Davenport resident, has won four straight amateur disc golf titles, returning to the sport with a bang after missing a year due to injury.

David Casas practices disc golf Thursday at Eastern Avenue Park. Casas, who is a professional magician, has been playing disc golf since 2012.