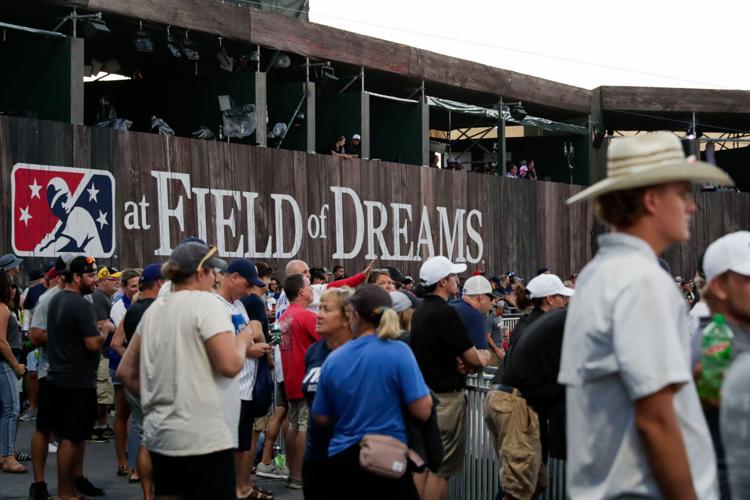 Fans stand inside the Field of Dreams during Tuesday night's minor league game between the Quad Cities River Bandits and Cedar Rapids Kernels. 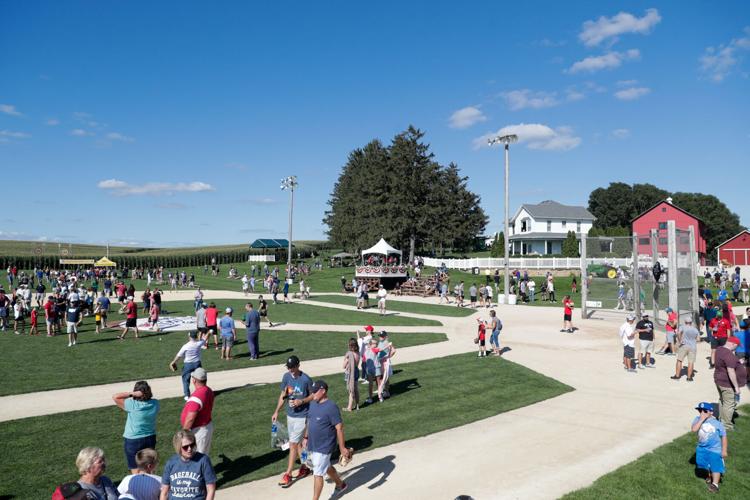 Scenes from the Field of Dreams MiLB game between the Quad Cities River Bandits and the Cedar Rapids Kernels on Tuesday in Dyersville. 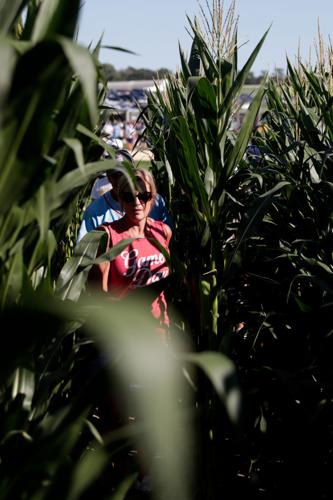 Spectators walk through corn to find their seats before the Quad Cities River Bandits take on the Cedar Rapids Kernels on Tuesday near Dyersville.

If you build it, somebody will find a way to make money off it.

So say goodbye to the quaint nostalgia invoked by that simple baseball field in the middle of a cornfield in Dyersville.

Thanks to Frank Thomas and his ownership group, the Big Hurt is planning to turn Dyersville into a big eyesore with his plans to build a massive $80 million complex surrounding the movie site that will include youth baseball and softball fields, team dormitories and a hotel.

It means no Field of Dreams game in 2023, but hey, at least when the ghost ballplayers come back to visit, they’ll have someplace to stay.

These future developments – solely about making as much money as possible – go against so much of what’s at the heart of the movie that’s the catalyst for all of this.

A big theme in Field of Dreams is eschewing monetary gains for something bigger.

Ray Kinsella plows over his corn, the source of his income, to build a baseball field that holds no monetary value. Everyone but his wife and daughter is telling him to tear down the field, sign his house over to the bank, to come to his senses. But Ray stands fast, even before Shoeless Joe Jackson appears on that foggy night.

He’s rewarded, not with money, but with peace. He watches players of eras past play the game that has marked the time. He is rewarded with a chance to heal his pained relationship with his father, simply by asking to play catch.

The “People will come … “ speech James Earl Jones delivers at the end of the movie is about the power of nostalgia, how something simple as baseball can invoke such powerful feelings. Sure, to enjoy that nostalgic feeling, you had to fork over $20 per person, but “it’s money they have, but peace they lack.

“They’ll watch the game and it’ll be as if they dipped themselves in magic waters. The memories will be so thick, they’ll have to brush them away from their faces.”

Well, now they’ll also have to brush away the fumes of charter buses bringing in all the youth teams, and forget about only spending $20 per person at this place where hot dogs at the big league ballpark cost $7.

Trust me, I get what this is all about, and to be honest, I’m surprised more than 30 years went by before somebody figured out a way to further capitalize on the simple tourist attraction.

Sports tourism is big business, generating $14.6 billion in tax revenues nationwide in 2019, with $6.8 billion accruing to state and local governments.

And I can’t imagine anyone in Dyersville, or at the Capitol in Des Moines – where on Tuesday Iowa Gov. Kim Reynolds allocated $12.5 million in additional funding for a permanent multi-use stadium – will be complaining about getting their portion from the revenue this complex will undoubtedly generate.

But at what cost?

The loss of simplicity and innocence. I’ve been to the Field of Dreams site as a kid, and I'm returning to it Thursday as an adult. There was something so pure and magical about that original field, to play a game and look to the outfield and see nothing but the corn and the horizon.

Now, you'll see the lights from the stadium next door, and though the complex will be distanced some way away from the corn, it’s safe to assume the hustle and bustle of countless youth teams and those staying at the hotel and dorm will make the odds you’ll be able to have a moment’s peace on the old ball field pretty slim.

What made the Field of Dreams site special was that it stood as a safe haven against the march of time, the dregs of capitalism. As James Earl Jones said, “It reminds us of all that once was good and it could be again.”

As everything became commercialized, it was comforting to know there was still the small little baseball field in the middle of the cornfields, even if it cost the aforementioned $20 to visit.

But now, that peace will soon be gone, replaced by hotels, youth tournaments and parking lots.

Does anyone really think Shoeless Joe Jackson would stop by now?

Tony La Russa stepped down as manager of the Chicago White Sox on Monday because of a heart issue.

La Russa re-retired while on medical leave with a heart condition. That decision came with the frustration of the disappointing White Sox season still churning in his gut.

The entire Major League Baseball playoff picture is now set. The four matchups in the wild-card round were locked in Tuesday night, right before the last day of the regular season. Every series starts Friday and is a best two of three. Plus, the higher seed will host every game. In the National League, the San Diego Padres visit the New York Mets while the Philadelphia Phillies play at the St. Louis Cardinals. In the American League, the Seattle Mariners visit the Toronto Blue Jays while the Tampa Bay Rays play at the Cleveland Guardians. The postseason was expanded from 10 teams last year to 12 this season.

Cory Youmans made the catch of a lifetime Tuesday night. When asked what he'd do with the prize, he said, "good question. I haven't thought about it."

Albert Pujols taking his final swings in October, Julio Rodríguez stepping in for the first time.

Move over, Babe. Prince Albert is the new No. 2 on a big baseball list.

MLB's postseason is here: A guide to the 12-team playoffs

Major League Baseball’s postseason has a little more heft this year. The playoffs are here, with the first games played on Friday. The postseason begins with a field of 12 teams and includes a best-of-three format for the opening wild-card round. That's up from 10 teams last season. The playoffs include a best-of-three format for the opening wild-card round. The three games will be scheduled on consecutive days from Friday through Sunday at the higher seed’s field. The first team that gets two wins advances. After that, the playoffs will be business as usual. The division series will be best-of-five, while the league championship series and World Series will be best-of-seven.

Phillies down Astros for 1st playoff berth since 2011

As a companion to the Post-Dispatch's Oct. 2 special commemorative edition celebrating the careers of Cardinals greats Albert Pujols and Yadier Molina, the Best Podcast in Baseball gathers several of the writers who contributed to that keepsake publication to discuss the Hall of Fame careers.

Fans stand inside the Field of Dreams during Tuesday night's minor league game between the Quad Cities River Bandits and Cedar Rapids Kernels.

Scenes from the Field of Dreams MiLB game between the Quad Cities River Bandits and the Cedar Rapids Kernels on Tuesday in Dyersville.

Spectators walk through corn to find their seats before the Quad Cities River Bandits take on the Cedar Rapids Kernels on Tuesday near Dyersville. 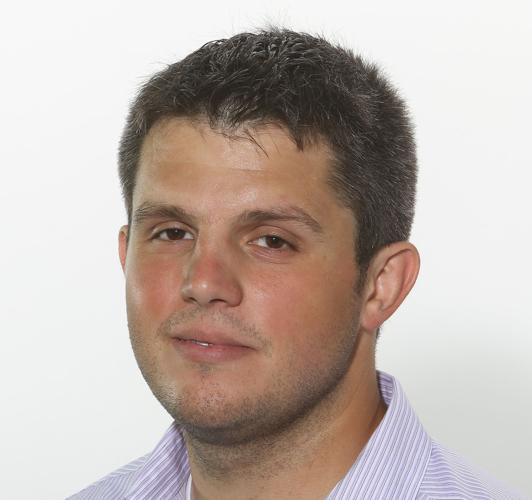