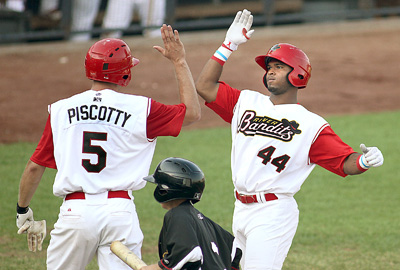 Quad-City River Bandits Stephen Piscotty has a high five after being driven in by a homer by Anthony Garcia (44) against Wisconsin in Davenport, Iowa Tuesday July 3, 2012. (Jeff Cook/QUAD-CITY TIMES) 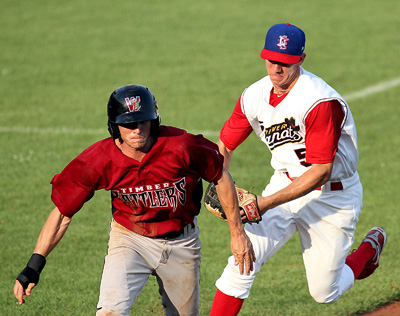 St. Louis, the parent club of the Midwest League franchise for the past eight years, chose to seek re-affiliation and met a deadline Tuesday to inform Major League Baseball that it planned to weigh its options before signing a player development contract at the low-A level for the 2013-14 seasons.

The move does not preclude the Cardinals from re-signing with Quad-Cities. But because no agreement for an extension has been reached, the reality is that in all likelihood St. Louis plans to secure an affiliation elsewhere.

The River Bandits are one of 10 teams at the low-A level, eight in the Midwest League and two in the South Atlantic League, that have no announced player development contracts in place with major-league clubs for next season.

Several of those teams, including the Clinton LumberKings, likely will renew existing agreements.

“We highly anticipate continuing our relationship with the (Seattle) Mariners,” LumberKings general manager Ted Tornow said. “We’ve had four good years with them, including reaching the playoffs three times.”

However, several Midwest League affiliations likely will change before the first pitch is thrown in 2013.

The Chicago Cubs have reportedly decided to end an eight-year relationship with the Peoria Chiefs and are expected to sign an agreement next week with the Kane County Cougars, while Cedar Rapids club officials have opted to end a 20-year affiliation with the Angels.

The Cardinals’ decision to explore options could clear the way for St. Louis to renew a relationship with Peoria, which hosted the club’s low-A franchise for nine years before the Chiefs opted for the Cubs over the Cardinals in 2005.

That move led St. Louis to the Quad-Cities, where it replaced the Twins, won the 2011 Midwest League championship, and reached the playoffs five times in the last eight seasons.

Under threats of hefty fines, baseball rules prohibit officials with minor- and major-league clubs that do not have deals finalized from discussing affiliation situations until next week.

Cardinals general manager John Mozeliak declined to discuss the situation with the St. Louis Post-Dispatch, saying, “I’m not really in a position to comment about that. Those are just the rules.”

“I’d like to talk, but I can’t at this point,” River Bandits owner Dave Heller said Wednesday, declining further comment.

At this point, Heller cannot even talk with any potential replacements for St. Louis.

The earliest that can happen is Sunday, when a two-week window begins that allows clubs the chance to talk with any unsigned potential business partner. By rule, any clubs that do not have a deal in place by Sept. 30 will be assigned an affiliate by Oct. 7.

One thing is a certainty: the Quad-Cities will not be left without an affiliate.

The Professional Baseball Agreement — the contract between the majors and minors — guarantees all 160 minor-league organizations of an affiliation agreement.

In its 53 years in the Midwest League, the Quad-Cities’ franchise has been affiliated with the Braves, Angels, Cubs, Astros, Twins and Cardinals.

It spent 25 years during two stints as an Angels affiliate, and its eight-year relationship with the Cardinals is the second-longest affiliation Quad-Cities has had with a big-league club.

Parent clubs of the Quad-Cities’ Midwest League franchise, the overall record of those clubs and postseason results:

Quad-City River Bandits Stephen Piscotty has a high five after being driven in by a homer by Anthony Garcia (44) against Wisconsin in Davenport, Iowa Tuesday July 3, 2012. (Jeff Cook/QUAD-CITY TIMES)