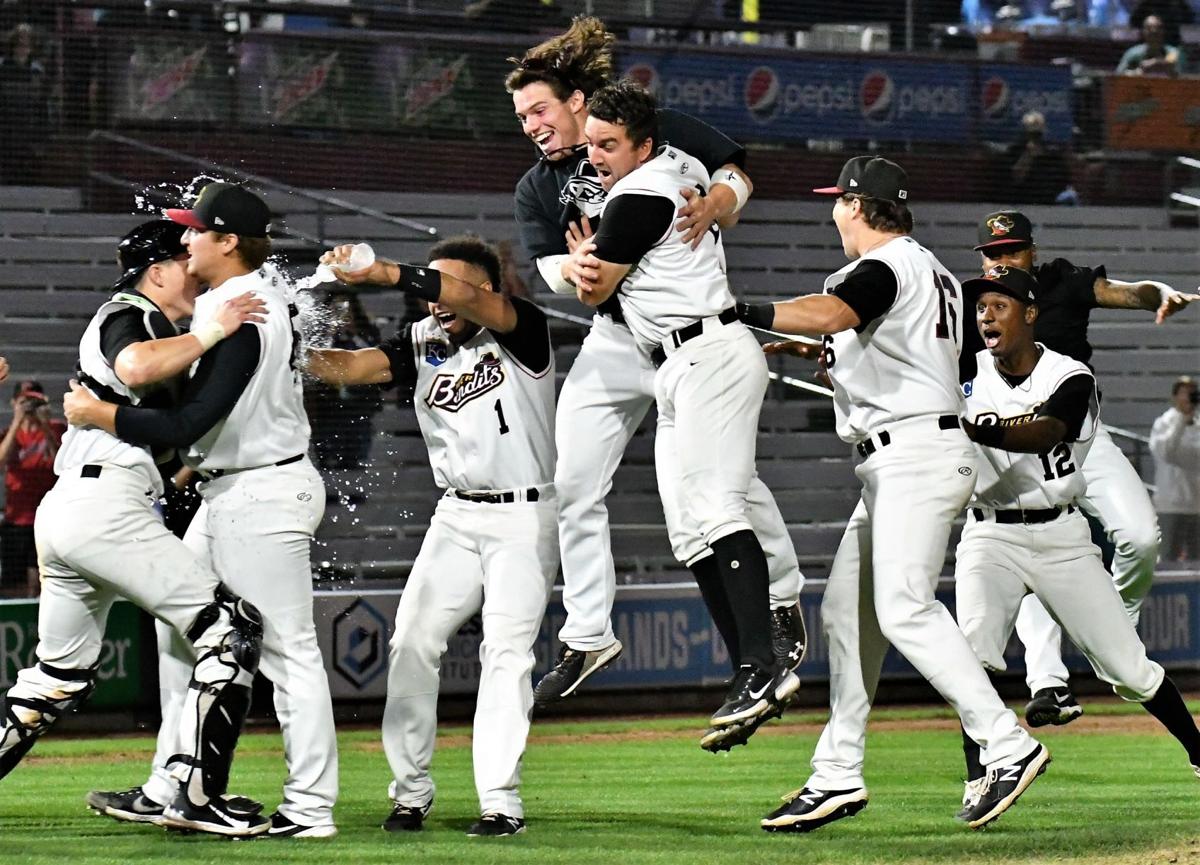 The Quad Cities River Bandits celebrate after winning the 2021 High-A Central League Championship with a 5-0 win over the Cedar Rapids Kernels Sunday at Modern Woodmen Park. 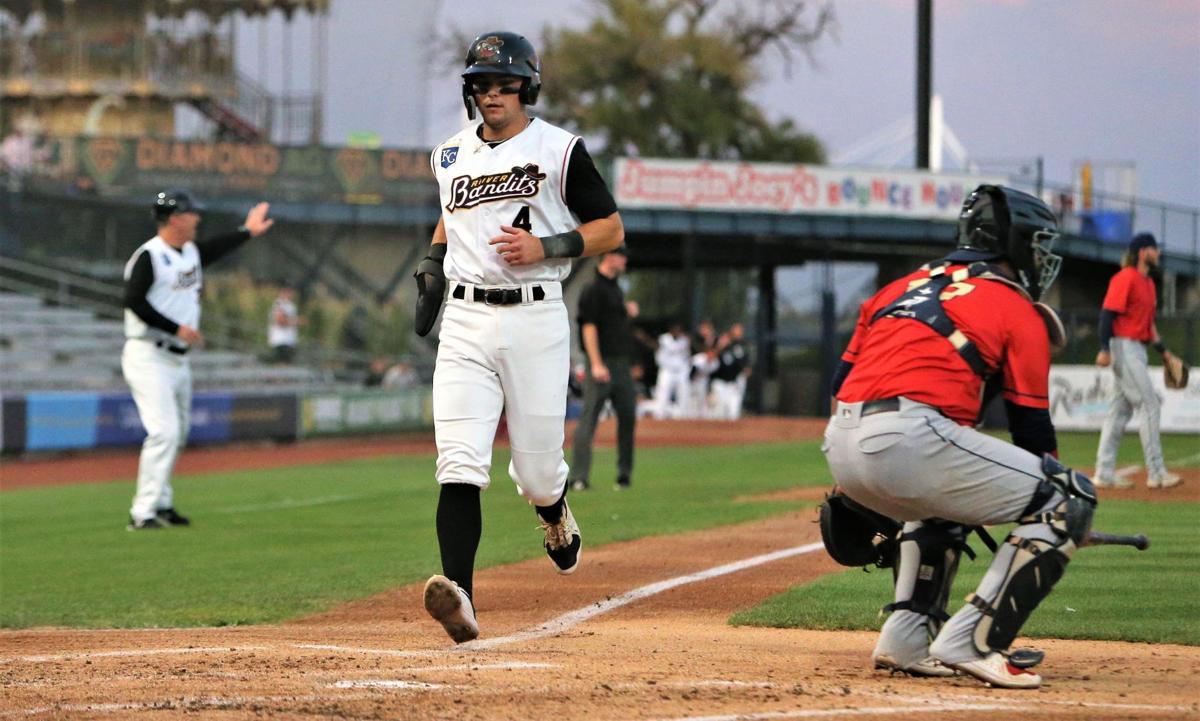 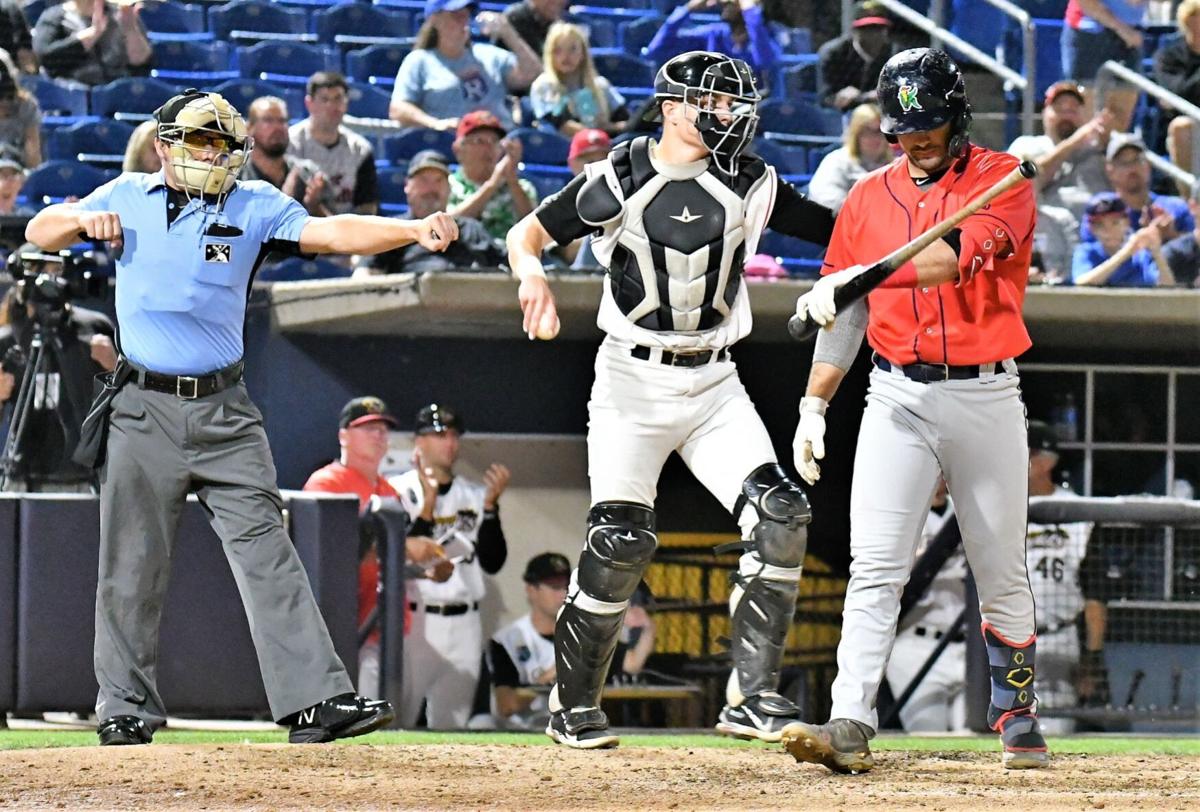 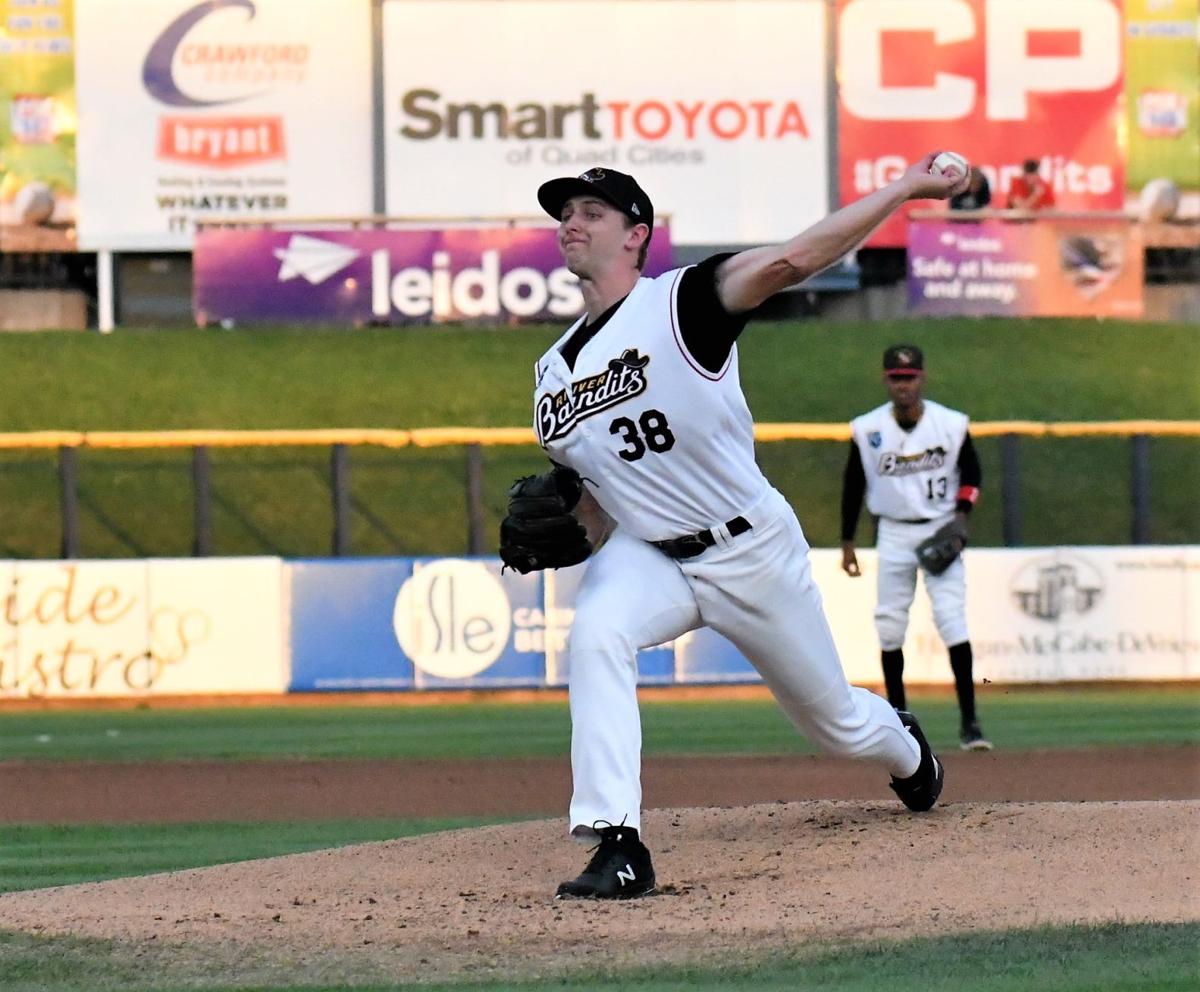 In the fifth and deciding game of the High-A Central League Championships, two-hit pitching, error-free defense and 12 hits from the most productive offense in the league led Quad Cities to a league championship.

The River Bandits won the final game of the championship series, shutting out Cedar Rapids 5-0 on Sunday night at Modern Woodmen Park.

“It was like a showcase of everything this team has been about all season, the perfect way to end the season,’’ said Quad Cities outfielder Tucker Bradley, who homered and drove in two runs in the River Bandits’ 80th victory in a 123-game season.

After winning 2-1 on a walk-off homer by Logan Porter to claim the fourth game on Saturday, Quad Cities crafted a quick start in the finale on its way to a title.

The River Bandits rode three perfect innings from starting pitcher A.J. Block and grabbed a 2-0 lead in the bottom of the first inning to set a title-winning tone.

“From the time the guys showed up at the ballpark, there was a different vibe,’’ Quad Cities manager Chris Widger said. “Everybody seemed looser, more at ease. The first four games, I feel like they felt some pressure. In this game, they just played like they have all season.’’

This year’s championship is the eighth won by the Quad Cities franchise in its 62-year history and its fourth while affiliated with three different major-league clubs since 2011.

The River Bandits won titles as a Cardinals affiliate in 2011 and as an Astros affiliate in 2013 and 2017 before winning this year’s championship in the club’s first year with the Royals organization and its first competing at the high-A level.

Block teamed with Zach Haake, Caden Monke and Nathan Webb on the two-hit shutout, combining to strike out 15 batters while walking eight.

The Kernels’ first hit came in the top of the fourth inning when Michael Helman singled to center after Edouard Julien reached on a leadoff walk.

Block struck out the next two batters he faced, ending an expected short start, but Haake recorded the game’s sixth strikeout to end the inning.

Haake retired three straight batters after giving up a pair of walks in the sixth, an inning before Monke walked the bases full with one out.

Webb worked out of the seventh-inning jam, striking out the first two batters he faced to end the both the scoring threat and the inning.

“A.J. got us off to a good start and both Haake and Webb came in and got the big outs we needed,’’ Widger said. “Terrific job by all those guys and we needed it against a good opponent.’’

The Kernels’ second hit was a one-out double by DaShawn Keirsey, but Webb closed the door with his fifth strike out.

He later finished off his 2.2 innings of relief work by getting Julien to pop out to end the game, sending River Bandits players spilling out of the dugout to celebrate as the first-ever champion in the new High-A Central League.

“This is what we’ve been working for all year,’’ Bradley said.

The celebration came at the conclusion of a season which saw the River Bandits follow a 77-41 regular season by winning the title series 3-2 with the same consistent approach.

As Quad Cities pitchers went to work, the River Bandits’ bats seized an early opportunity to take a lead and never let up.

Quad Cities had at least one runner reach base in every inning, but scored the only runs it needed in the bottom of the first.

Kernels starter Cody Laweryson, seeing his first action on the mound since losing a Sept. 14 game at Peoria, walked two of the first three Quad Cities batters he faced.

His outing ended after Porter singled to center to score Maikel Garcia and John Rave followed by rattling a double off the fence in right to score Michael Massey.

The River Bandits added to their lead by pushing additional runs across in three of the next four innings.

Singles by Will Hancock, Garcia and Loftin extended the Quad Cities lead to 3-0 in the second inning before extra-base hits grew the lead in the fourth and fifth.

Bradley opened the River Bandits’ fourth with a home run to left and then drove home Quad Cities’ fifth run of the game in the fifth.

His sacrifice fly to center scored Eric Cole after he opened the inning by driving a double into the left-field corner and advanced on a single by Hancock.

“The mindset was to just keep going, keep putting the pressure on them,’’ Bradley said. “They were just a bloop and blast away from making it a game, and we didn’t want to let that happen.’’

Pitchers Garrett Davila, C.J. Eldred, Tad Ratliff and Nolan Watson, outfielder Seuly Matias and infielders Vinnie Pasquantino, Jeison Guzman, Jimmy Govern and Austin Dennis, the latter a player on the 2019 River Bandits, were part of the Naturals' team that beat a Twins affiliate for the title.

Title town: The River Bandits franchise was playing for the eighth league championship in its 62-year history on Sunday.

Sunday marked the first time the River Bandits had been involved in a deciding fifth game in the years since the Midwest League went from a best-of-three to best-of-five finals series in 1983.

The roots of the Quad Cities River Bandits' High-A Central League championship run deep, all the way back to 2019.

The Quad Cities River Bandits celebrate after winning the 2021 High-A Central League Championship with a 5-0 win over the Cedar Rapids Kernels Sunday at Modern Woodmen Park.