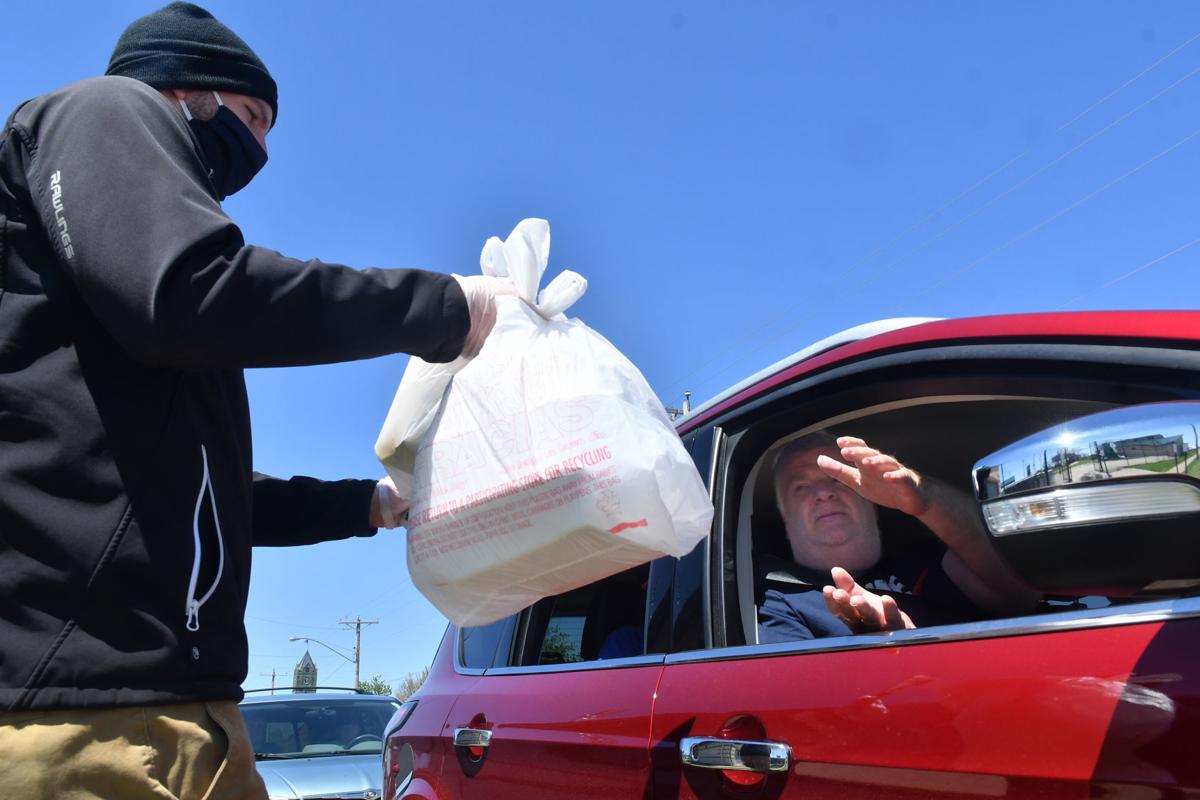 Michael Broskowski, director of broadcast and media relations for the Clinton LumberKings, hands Charles Anderson of Clinton his food order at curbside pickup at the Nelson Corp Field on Thursday. With no baseball being played, the LumberKings are giving fans a chance to get their ballpark food fix, offering curbside pickup of ballpark favorites — including the franchise's legendary Garbage Pail assortment of fried goodies. 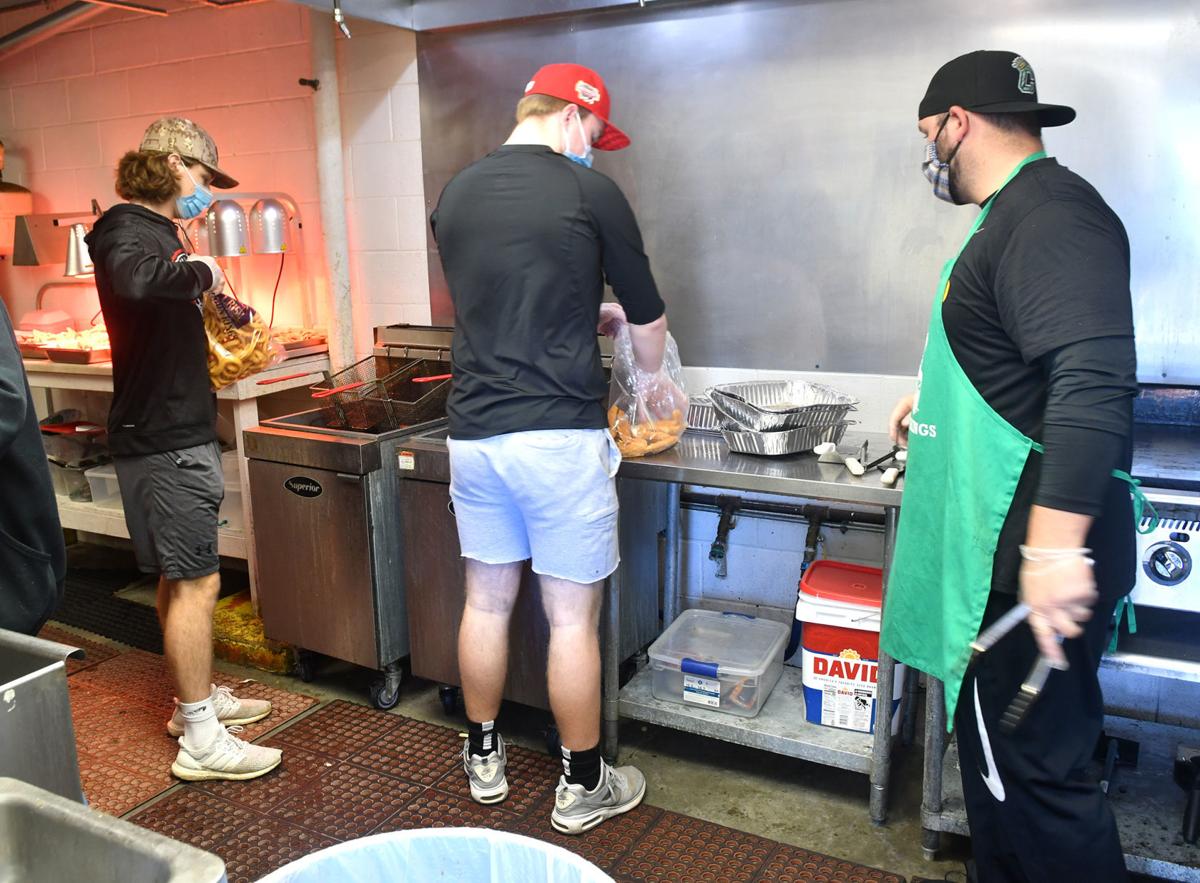 Kitchen crews at Nelson Corp Field, home of the Clinton LumberKings, work to fill the food orders for the curbside pickup customers Thursday. 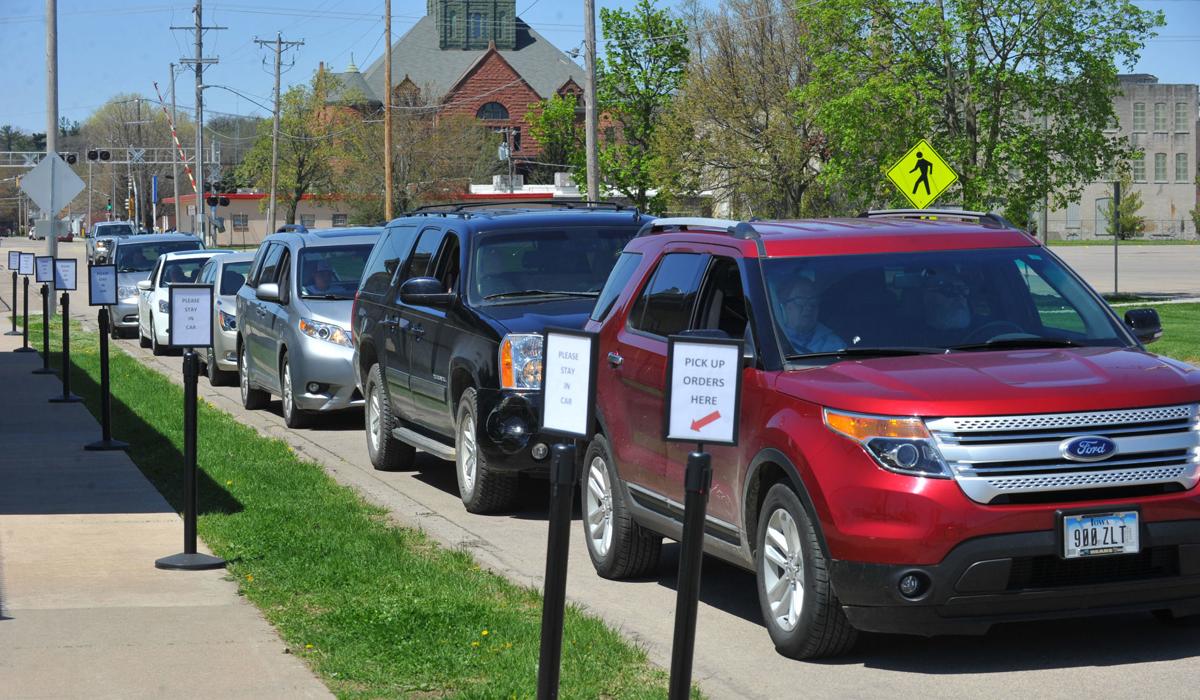 A long line of vehicles sit waiting for their food orders next to Nelson Corp Field, home of the Clinton Lumberkings, Thursday.

CLINTON — If you cook it, they will come.

This hasn’t exactly been the start to the 2020 season that Clinton LumberKings general manager Ted Tornow or anybody in minor-league baseball envisioned, but the delayed start to the Midwest League season has taught the team’s front office staff at least one thing.

People in Clinton have an appetite for professional baseball with all the fixings, and they’ve been willing to show that every Thursday.

"We went into this really having no idea how it might all play out, but I’ve been blown away by the response," Tornow said. "With all the talk of contraction and such, it’s good to know that people do care. They’re telling us that and they’re telling us that they miss baseball right now."

Tornow can’t tell fans when a season delayed by the COVID-19 pandemic might start, but he can give them at least a taste of what they’ve come to expect at NelsonCorp Field.

Thursday was the third time the LumberKings have provided their fans with a chance to order some of their favorite ballpark fare, drive up to a gate adjacent to the stadium and carry out everything from brats, burgers, hot dogs and pulled pork to the signature item at Clinton’s concession stands, the Garbage Pail.

"We’re working up to that. Today, it’s a cheeseburger and a chicken sandwich," said Janet Jackson of Clinton, who joined her husband Larry in enjoying a lunch break with the LumberKings on Thursday.

"It’s a way for us to support the club. Baseball’s been here a long time and we want to see it continue. Larry remembers coming out to games with his grandparents. This is the third week in a row we’ve been out here."

Judy Dennis of Clinton said it was good to have a chance enjoy some ballpark fare.

"It’s that time of year, baseball season, and it’s good to support the team and the ballpark," she said.

Many of the folks who pre-ordered their food Thursday were repeat customers.

The LumberKings first offered the curbside concessions on April 16, the day Clinton was scheduled to host its home opener.

Tornow said the idea came out of a brainstorming session with staff members.

"A team on the East Coast was doing Hope-ning Night instead of Opening Night and we thought about ‘What can we do?’ We knew we weren’t going to have a game. We knew we couldn’t have people come out to the park and experience an empty field of dreams," Tornow said.

"But we wanted to do something on that Thursday, our opener, and we decided to give people a chance to at least enjoy some of the food that they like when they come our games."

A menu was placed online and the LumberKings took orders both online and on the phone. The response was immediate.

"On Monday, we had a couple of calls and maybe a half-dozen email orders. We doubled that Tuesday and again Wednesday and on Thursday, we took over 200 orders from 9 in the morning until 6 at night. They just kept coming," Tornow said.

That has played out the past two Thursdays as well, and the LumberKings plan to continue to offer ballpark food every Thursday until the season starts.

All orders are prepaid and confirmed over the phone by LumberKings staff members, and customers are asked for an approximate time of arrival.

Fans drive up next to a gate adjacent to a concession stand on the left field side of NelsonCorp Field. A LumberKings staff member collects names of the customer, retrieves the order and delivers it to the car door.

Thursday, fans were given a LumberKings team calendar in addition to their food.

Members of the LumberKings’ front office staff along with a few volunteers from the team’s board of directors all fill roles in preparing the food, sacking it and delivering it.

With a number of new front-office staff members, the Thursday food has given the group a chance to work together and provided a welcome break to the frustration of not hosting games.

"They all still have their projects — the grass has to get cut, new merchandise is arriving and the media guide is being worked on — but it’s been tough not having games and having people in the ballpark," Tornow said. "That’s what we do. So with this, we’re having a little fun with it together one day a week and that’s been good for all of us."

The revenue has also allowed the team to keep its small front-office staff on the job at a time when some minor-league teams have furloughed employees.

Two other Midwest League clubs, Beloit and South Bend, are offering their own version of curbside dining.

The Snappers are grilling lunch items three days each week and the Cubs are selling baskets of food designed to feed a family of four.

In Clinton, fans seem to be enjoying the experience.

Numbers have grown each week and additional menu items have been added as well, a chicken sandwich the second week and pulled pork on Thursday.

The first car Thursday pulled up about 30 minutes before the scheduled noon start, but as food was prepared it was delivered.

Cars have been lined up at times from the outfield gate nearly to the stadium’s front gate, but delivering two or three orders at a time, efficiency is part of the attraction.

"It’s been easy to order online and the pick up doesn’t take any time at all," said Clinton resident Joel Butz, who brought his father Claire to lunch on Thursday. "We’ve done it since the first week, and we’ve had brats and the Garbage Pail. I think we’re going a little healthier today. It’s a good, quick lunch."

And, it’s a chance to support the LumberKings.

"We’re all looking forward to when we can come out and watch games again," Chuck Johnson of Clinton said while waiting for his lunch.

"The club here does such a good job of supporting the community and this is our chance to help them out at a time when we need to show baseball that professional baseball is important to Clinton."

No baseball yet, but Bandits plan for other events

While it remains undetermined when or even if there will be a Midwest League baseball season in 2020, the gates at Modern Woodmen Park may fin…

The start of their season grows less likely by the day, but baseball players in the Houston Astros farm system will continue to be paid throug…

While the timing of the first pitch of the Midwest League season remains undetermined, planning for that time has been on the minds of Quad Ci…

Michael Broskowski, director of broadcast and media relations for the Clinton LumberKings, hands Charles Anderson of Clinton his food order at curbside pickup at the Nelson Corp Field on Thursday. With no baseball being played, the LumberKings are giving fans a chance to get their ballpark food fix, offering curbside pickup of ballpark favorites — including the franchise's legendary Garbage Pail assortment of fried goodies.

Kitchen crews at Nelson Corp Field, home of the Clinton LumberKings, work to fill the food orders for the curbside pickup customers Thursday.

A long line of vehicles sit waiting for their food orders next to Nelson Corp Field, home of the Clinton Lumberkings, Thursday.