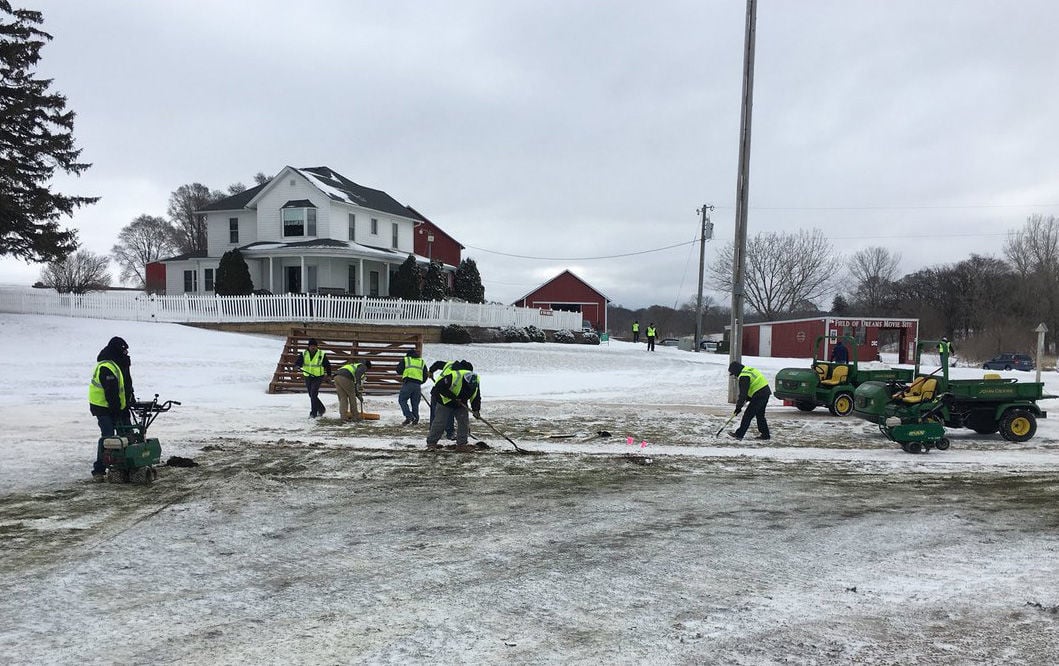 Volunteers including staff members from the Quad-Cities River Bandits, Clinton LumberKings and Cedar Rapids Kernels begin the work Monday of repairing a vandalized baseball field at the Field of Dreams site near Dyersville, Iowa. 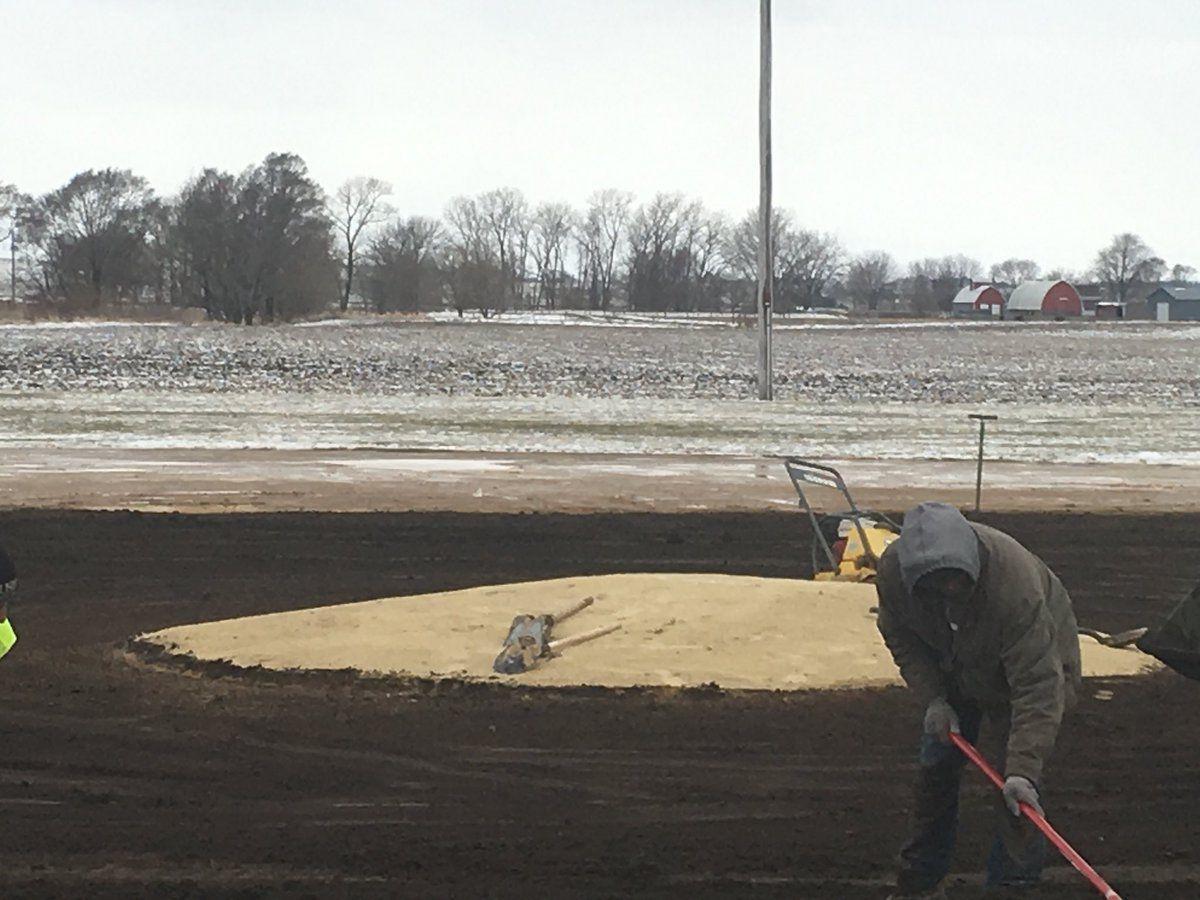 Crews work to rebuild an infield Monday at the Field of Dreams site in Dyersville, Iowa. Vandals driving a vehicle over a soft surface in January left behind four-inch ruts. 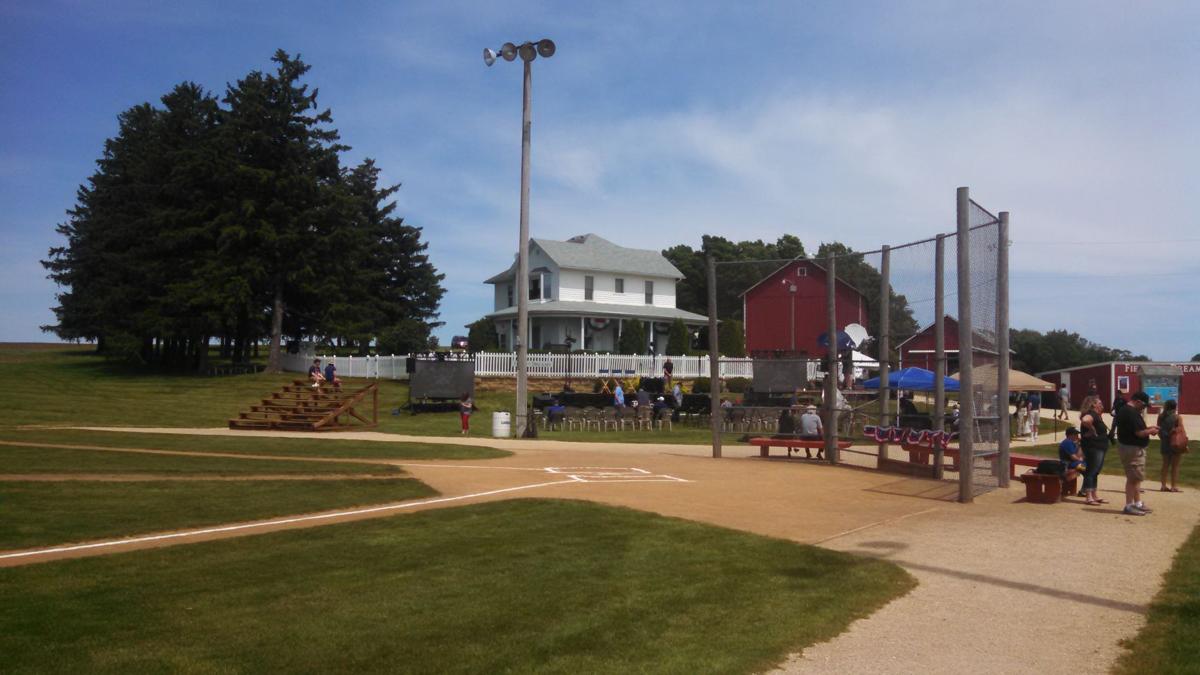 The Pawtucket Red Sox are taking their Dinner on the Diamond program on the road, offering weekend dinner experiences on the baseball diamond at the Field of Dreams movie site near Dyersville, Iowa, this fall.

Staff members from the Quad-Cities River Bandits and Clinton LumberKings as well as a crew from Milan-based Bush Sports Turf worked Monday to help bring the “Dreams’’ to life again.

Through a cooperative effort organized by Minor League Baseball, they joined representatives from two other Iowa minor-league baseball teams in helping repair the playing surface at the Field of Dreams site near Dyersville, Iowa.

Ruts up to four inches deep were created on Jan. 23 by a vehicle vandals drove across soft soil at the baseball diamond surrounded by farm fields and an iconic Midwestern farmhouse which served as the backdrop for the 1989 movie “Field of Dreams.”

“It’s unfortunate someone went to the extent to cause the damage they did, but it’s an honor to be able to be part of the group that is helping bring this field back,’’ River Bandits groundskeeper Andrew Marking said. “Thousands of people visit this place every year and it means a lot to the people in Dyersville and Iowa as well as to all of us who work in baseball.’’

Marking was among more than 50 volunteers who spent Monday removing old grass, realigning a new diamond and rebuilding a damaged pitcher’s mound before new sod was laid to create a new infield and sidelines.

Crews will complete the project by installing a new infield surface over the next few days.

“It’s a big project but we have a lot of hands involved and we’re making progress,’’ Marking said. “We spent the morning clearing the old stuff out and then starting to put the new sod down.’’

Front-office personnel from the Cedar Rapids Kernels, a five-member crew from the Iowa Cubs Sports Turf subsidiary and around a dozen workers from Bush Sports Turf and the baseball team from Iowa Wesleyan University assisted on the project.

Jeff Lantz, an Iowa City native and the senior director of communications for Minor League Baseball, organized the effort which was originally scheduled to take place last month but was postponed three times because of lingering winter weather.

“Our clubs across the country help their communities in a lot of ways and when we learned of the need for help in Dyersville, it was a no-brainer,’’ Lantz said. “We had the expertise to help and when we reached out, the response was immediate. This is a place that is very special to all of us in baseball.’’

Lantz said Steve Bush and his Bush Sports Turf company provided much of the equipment needed to rebuild the field.

From a sod cutter to a laser grader and equipment needed to reposition the pitcher’s mound and home plate, the equipment and the people to operate it were provided.

“There is a reason Steve’s company has built as many major-league fields as they have and when we first contacted Steve, he didn’t hesitate to offer the help,’’ Lantz said. “He’s been a godsend for this project.’’

Despite a couple of inches of fresh snow, the work started at 9 a.m. as scheduled and continued throughout the day.

The work started with using a leaf blower to remove snow from the diamond before the real work began.

“There are a lot of people involved and it’s a project that will get this field back in good shape, which is good for everybody,’’ Chesser said.

Chesser views the project as an extension of the River Bandits’ community involvement.

“The River Bandits’ reach extends beyond the Quad-Cities and whether the need is in the Quad-Cities, Geneseo, Muscatine or Dyersville, we’re willing to pitch in if we can,’’ Chesser said.

LumberKings general manager Ted Tornow said visitors to the Field of Dreams site frequently make their way to Midwest League games in the region as well.

“We’re all in the same baseball family in a lot of ways,’’ Tornow said. “When we heard about what happened there in January, we reached out to see what we could to help and the project that Jeff Lantz put together is the result. It’s a great way for us to work together and do the neighborly thing and help.’’

DAY, THEN NIGHT: Quad-Cities and Cedar Rapids will make up a recently postponed game in Cedar Rapids in what is believed to be the first day-night doubleheader hosted by a West Division team in the Midwest League.

The River Bandits and Kernels will play two seven-inning games in Cedar Rapids on May 16, making up a game postponed on April 8.

The first game will be played at noon, the original start time for a game that day, and the second game which will require a separate admission ticket will start at 6:30 p.m.

“It’s a little unique in our league, (West Michigan) has done it before, and it was something Cedar Rapids wanted to try,’’ Chesser said “Our coaches were amenable to it so we agreed to participate.’’

SUSPENDED: Catcher Jose Herrera played in one game this season for Kane County — going 0-for-3 at the plate in an April 8 game at Clinton — before being suspended for 50 games last week after testing positive for Methylhexaneamine and Oxilofrine, both on the list of banned as stimulants as part of Minor League Baseball’s Drug Prevention and Treatment program.

Both are commonly found in dietary supplements but are both banned for participants in the game, leading to the suspension for Herrera, a .208 hitter over 58 games last season for Kane County.

HOT START: With hits in 15 of his first 30 at-bats, Peoria third baseman Juan Yepez is this season’s first Midwest League player of the week.

Yepez has also driven home 11 runs through nine games for the Chiefs.

Beloit’s Bryce Conley, who started a combined no-hitter at Burlington last week, was named pitcher of the week.

Minnesota’s Joe Mauer became the fifth former player from a Davenport-based minor-league team to record 2,000 hits at the major-league level when he reached that plateau for the Twins on Thursday.

Baseball fans in Clinton will continue to have a chance to root, root, root for the home team at NelsonCorp Field in the summer of 2021.

Ken Croken has regularly been a fan in the stands at Quad Cities River Bandits games.

Ken Croken enjoys baseball, but the Scott County supervisor had another reason for wanting to become part of the Quad Cities River Bandits’ ow…

Volunteers including staff members from the Quad-Cities River Bandits, Clinton LumberKings and Cedar Rapids Kernels begin the work Monday of repairing a vandalized baseball field at the Field of Dreams site near Dyersville, Iowa.

Crews work to rebuild an infield Monday at the Field of Dreams site in Dyersville, Iowa. Vandals driving a vehicle over a soft surface in January left behind four-inch ruts.

The Pawtucket Red Sox are taking their Dinner on the Diamond program on the road, offering weekend dinner experiences on the baseball diamond at the Field of Dreams movie site near Dyersville, Iowa, this fall.