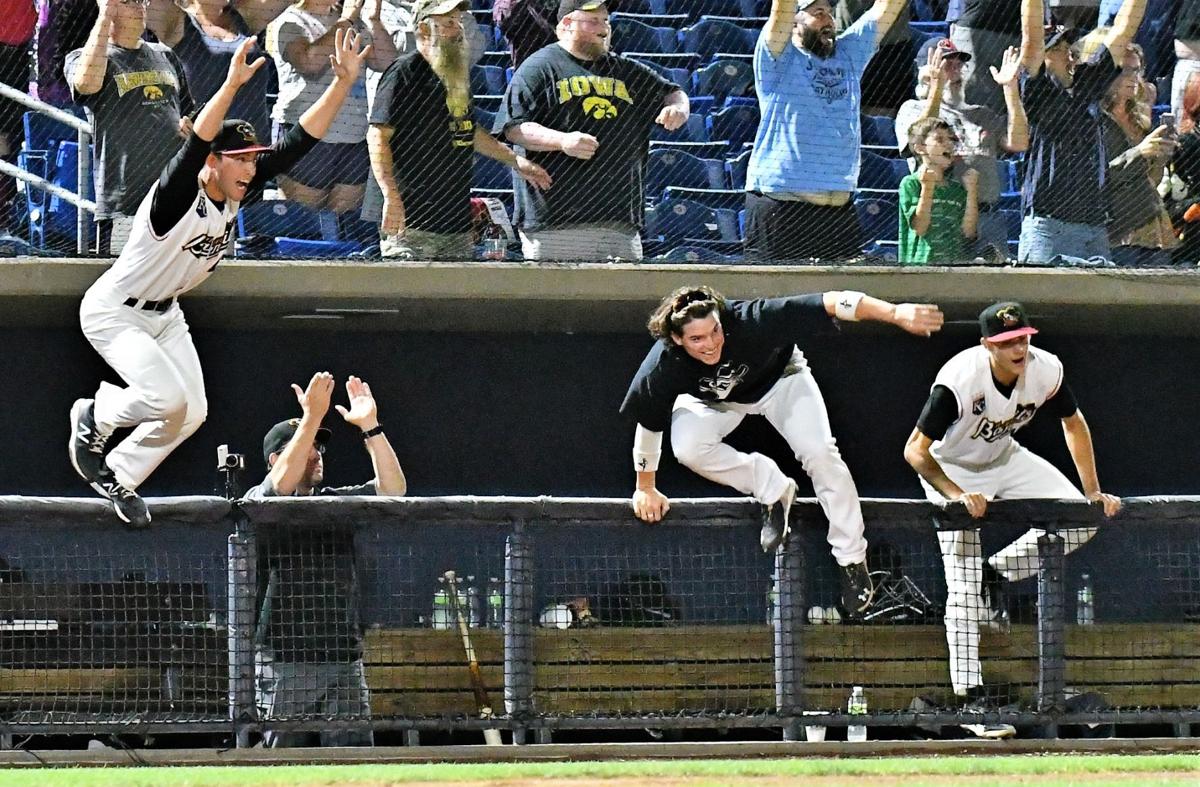 Quad Cities players jump over the dugout rail at Modern Woodmen Park to join teammates in a postgame celebration following the final out of the River Bandits' title-clinching 5-0 win over Cedar Rapids in the High-A Central League Championships on Sunday night. 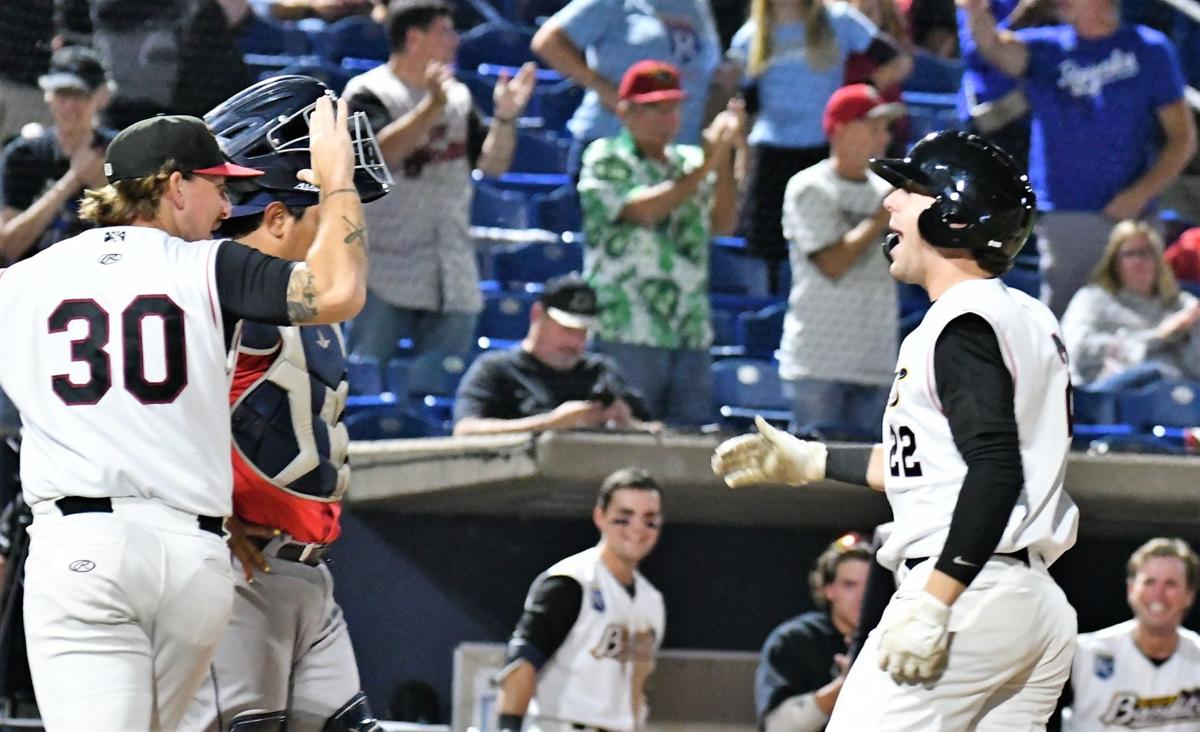 Quad Cities right fielder Tucker Bradley celebrates with pitcher Charlie Neuweiler after hitting a home run in the bottom of the fourth inning against Cedar Rapids during Game 5 of the High-A Central League Championship Series Sunday at Modern Woodmen Park.

Long before watching his players hop the rail at the front of the home dugout at Modern Woodmen Park to join in a championship celebration Sunday night, Chris Widger had a hunch 2021 could be a special season.

The manager of the Quad Cities River Bandits mentioned that during a press conference the day before the team’s season opener on May 4, talking about the bond he had seen develop between players during spring training.

“These guys liked being around each other from the time when we all got together in the spring,’’ Widger said. “They came up with a River Bandits handshake, had some fun that type of thing. There was a bond, a feeling. I think they sensed the possibilities.’’

Most of the players the Kansas City Royals assigned to their new High-A Central League affiliate played on a team managed by Widger in 2019 at short-season Burlington (N.C.) in the Appalachian League.

That team had success, reaching the league championship series, but it did not win the title.

In a 2019 season in which Kansas City affiliates won league championships in the short-season Pioneer League and at both Class A levels in the South Atlantic and Carolina Leagues, to be on the outside looking in when their peers were receiving championship rings stung.

It also created motivation that only grew as players spent the COVID-canceled 2020 season on their own training and preparing for a hopeful return to competition this year.

“We’ve won a lot of games, but we’re still a hungry baseball team,’’ infielder Michael Massey said prior to the start of the High-A Central League Championship Series a week ago.

The River Bandits took those 2019 frustrations out of the competition throughout the regular season.

Quad Cities moved into first place in the Western Division standings on May 12, seven games into the season, and never let go of its grip on first place the remainder of the year.

“This team put its foot on the gas and never let up,’’ relief pitcher Mitch Ellis said.

Quad Cities eventually worked its way to a 77-40 record during the final weekend of the regular season and carried a 77-41 record into its unique postseason series with Cedar Rapids, a best-of-five championship match-up between teams with the two best records in the league.

It took five games for the River Bandits to earn the fourth league championship won by Quad Cities since 2011, but the wait was worth it.

“The best thing is that we won it together. A different guy stepped up every night. Everybody did their part,’’ said outfielder Tucker Bradley, who drove in two of the River Bandits’ five runs and homered in Sunday’s deciding fifth game of the title series.

Over the course of the regular season, Quad Cities lost only one of the 20 six-game sets its played, winning 13 and splitting six others.

The River Bandits had a flair for drama, coming from behind to win in 41 of their 80 victories and celebrating eight walk-off wins, the last a Logan Porter homer in the fourth game of the championship series.

Nick Loftin finished hitting for the cycle by homering for another walk-off win, completing a wild 14-12 win over South Bend on Aug. 1.

Quad Cities established a new franchise record by hitting 144 home runs and led the league with a .261 team batting average.

Loftin and Massey shared the league batting title with .289 averages and Bradley was seventh in the league with a .280 average, all part of a potent offense which finished with a league-best 401 extra-base hits.

The River Bandits had their moments on the mound as well.

Zach Haake and Dante Biasi combined on the River Bandits’ first no-hitter since 2009 in a 9-0 win over Wisconsin on June 18 and Anthony Veneziano shared the league lead with 127 strikeouts.

Will Klein, whose fastball regularly topped out over 100 miles per hour, worked out of the bullpen but finished third in the league with 121 stirikeouts and as a team, the River Bandits pitching staff helped themselves by issuing a league-low 460 walks.

“These guys, they played for each other all season. In a year where things were different because of the pandemic, they made my job easy,’’ Widger said.

“They were very motivated and worked well together right from the start. The guys who were in Burlington with me in '19, they knew what they wanted. The guys who came in, they blended in right away. They earned this. They’re champions, both on and off the field.’’

Quad Cities players jump over the dugout rail at Modern Woodmen Park to join teammates in a postgame celebration following the final out of the River Bandits' title-clinching 5-0 win over Cedar Rapids in the High-A Central League Championships on Sunday night.

Quad Cities right fielder Tucker Bradley celebrates with pitcher Charlie Neuweiler after hitting a home run in the bottom of the fourth inning against Cedar Rapids during Game 5 of the High-A Central League Championship Series Sunday at Modern Woodmen Park.