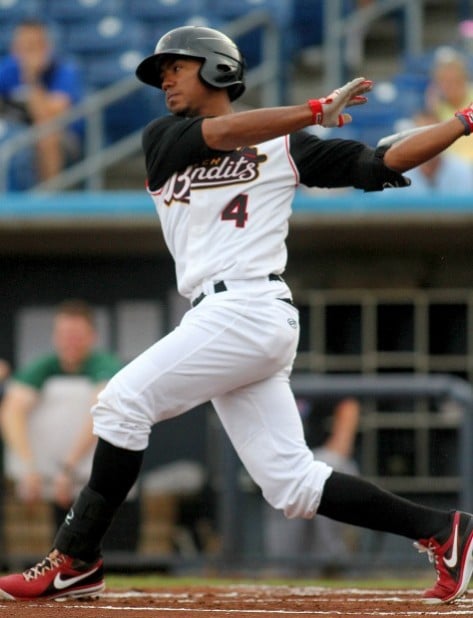 Center-fielder Teoscar Hernandez has been among the River Bandits' most consistent players this season. 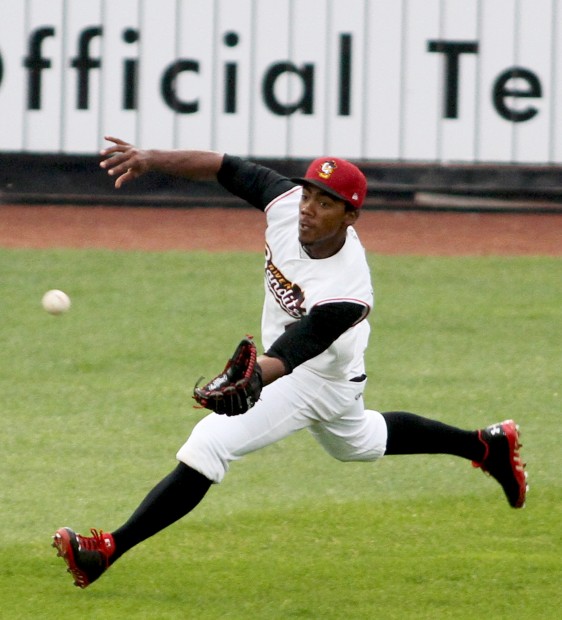 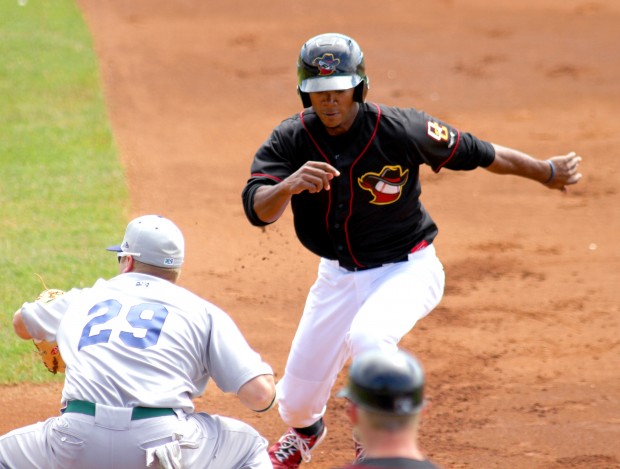 Quad-Cities' Teoscar Hernandez gets back to first base during a recent game.

There is only one player named Teoscar in all of professional baseball and in his first full season, Teoscar Hernandez is making a name for himself at the top of the Quad-Cities River Bandits’ batting order.

Hernandez carries a .269 batting average for the season and leads the River Bandits with 10 home runs and eight triples. He also is second on the team with 21 stolen bases in 31 attempts.

Since returning from a stint on the disabled list in early July, Hernandez has hit .289 and has collected 15 of his 45 RBI and 13 of his 37 extra-base hits.

The 20-year-old outfielder from the Dominican Republic has helped himself at the plate with tremendous bat speed that has helped him progress quickly in his first full season in the Astros organization.

“I worked hard in spring training because I wanted to be here,’’ Hernandez said. “I put in my mind that I wanted to make it to Quad-Cities and that pushed me every day.’’

Hernandez batted .243 in 51 games last season in the Gulf Coast League, but skipped Houston’s two short-season clubs when he received a late-season promotion to Lexington where he hit .240 in eight games in the low-A South Atlantic League.

“I hit a home run in my first game in Lexington and that told me that I could play here, that I had a chance to make this team if I came to spring training ready to go,’’ Hernandez said.

That didn’t prove to be an issue.

“He was probably the first guy to make this team,’’ Lopez said. “Halfway through spring training, there wasn’t any doubt. Teoscar came in ready to compete, had a great spring and that carried over to April and May.’’

Hernandez was named by the Astros as the organization’s player of the month at the low-A level in April when he enjoyed a .297 start and he hasn’t let up since.

“He’s worked hard with our hitting coach (Joel Chimelis) and our base-running guy (Vince Coleman) and that work pays off,’’ Lopez said. “He’s made the adjustments he’s needed to make and he’s continued to be a very confident player.’’

Hernandez grew up playing basketball and volleyball in his hometown of Cotui, D.R., but gravitated toward baseball as he grew older.

“I did not know if I could do it or not, but my coaches, they told me I could play professional baseball,'' said Hernandez, who signed with Houston as an undrafted free agent in February, 2011, and hit .274 that year for the Astros’ team in the Dominican Summer League. "I trusted them and worked on my game to get better. Things worked out.

“My goal was to get to the United States and play. I was able to do that and it means a lot to me to be a professional baseball player and have a chance to get to the big leagues.’’

Hernandez finds himself in a leadoff role with Quad-Cities, something new for him after batting in the fourth through seventh spots with the two clubs he played for a year ago.

“It had been different for me. My job now is to get on base and let other guys drive me in. I used to be the player driving the leadoff guys in,’’ Hernandez said.

Lopez suspects that Hernandez projects as more of a two or three hole hitter as he progresses to higher levels, but believes the time he is spending in a leadoff role now will facilitate that.

“Putting him in the leadoff position here is giving him a chance to recognize pitches and develop his eyes as he hits and allows us to take advantage of his speed as he develops his base-running skills,’’ Lopez said. “He’s got the power and speed in his swing. It’s a matter of continuing to work at it.’’

That work continues as Hernandez helps Quad-Cities in its push to earn a Midwest League playoff berth.

“I have to keep working every day to get better. That does not change in this game,’’ Hernandez said. “If I want to do the things I want to do, I have to come here ready to work and get better.’’

Lopez believes Hernandez has the skill and quickness needed to play any of the outfield positions.

“He has some work to do there, but he has shown a willingness to work,’’ Lopez said. “That gives him a chance.’’

From on the field to off it, the Quad Cities River Bandits will recognize heroes of all sorts during the 2021 season at Modern Woodmen Park.

South Bend scored three times in the bottom of the eighth inning to hand Quad Cities a 7-4 loss at Four Winds Field in both teams' season opener.

When the Quad Cities River Bandits take the field for the first time as a Kansas City Royals affiliate one week from Tuesday, they will do so …

Center-fielder Teoscar Hernandez has been among the River Bandits' most consistent players this season.

Quad-Cities' Teoscar Hernandez gets back to first base during a recent game.