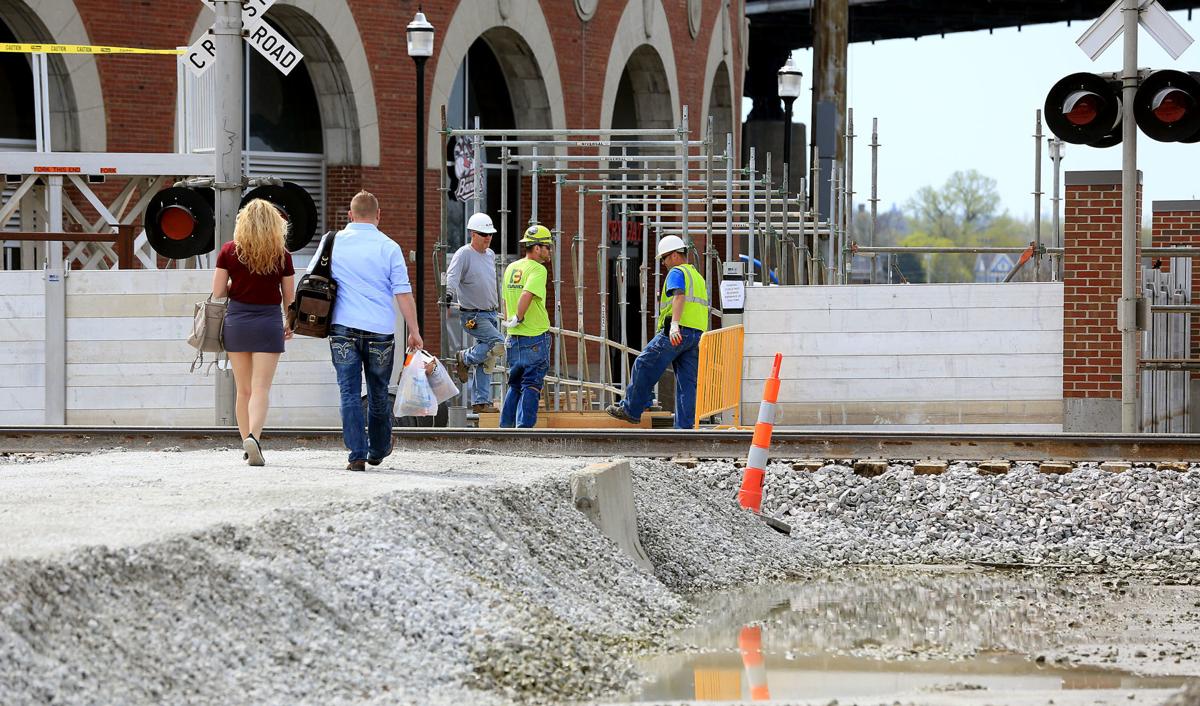 Quad-Cities River Bandits employees use the partially completed ramp being constructed by Carl Bolander & Sons Co. of St. Paul, Minnesota, to access Modern Woodmen Park on Monday. The Canadian Pacific Railroad has raised the tracks along the Mississippi River near the park. 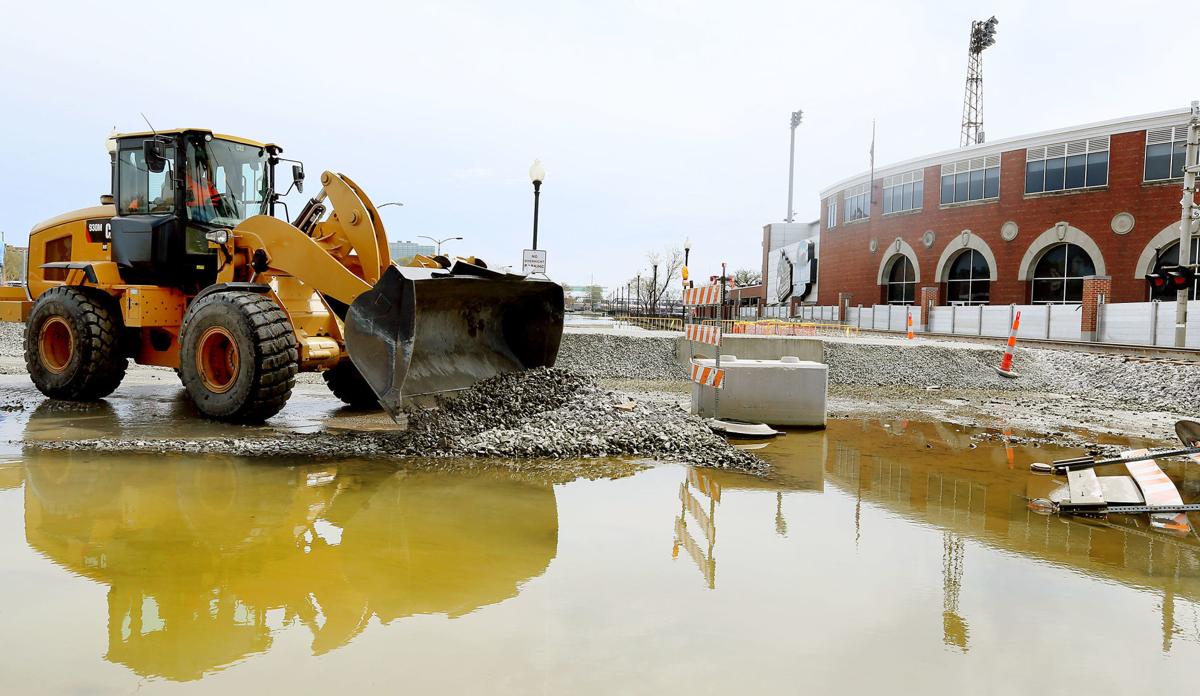 Workers work on building a ramp to match the level of the Canadian Pacific Railroad tracks near Modern Woodmen Park on Monday. 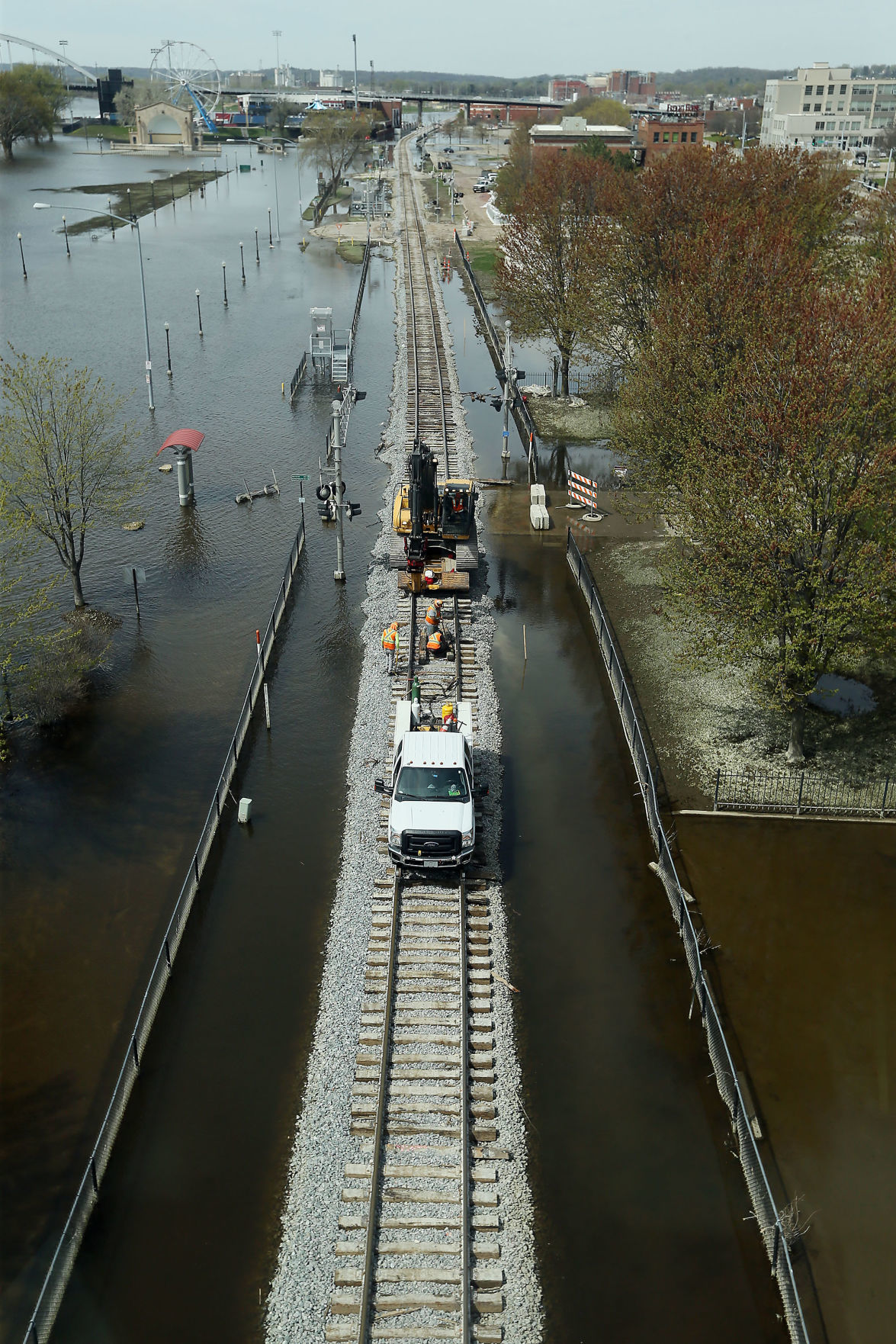 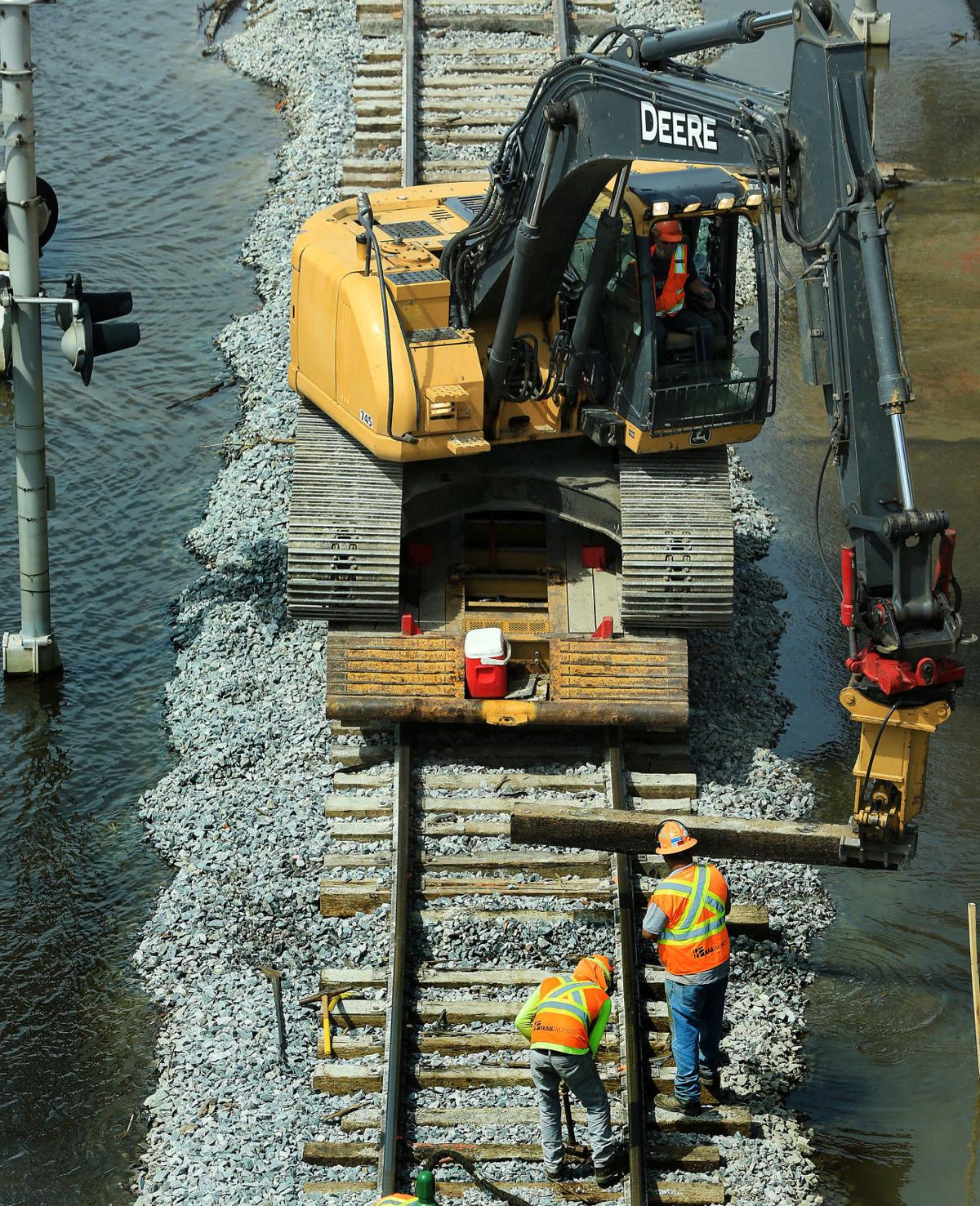 When Mississippi River floodwaters went down late last week, a temporary solution went up which will allow baseball to return soon to Davenport’s Modern Woodmen Park.

Asphalt is scheduled to be placed over the top of a newly-installed gravel walkway today that will allow fans to cross recently-elevated railroad tracks and enter the stadium’s plaza by walking down a ramp that was being put in place Monday.

While the stadium has remained unaffected by flooding, floodwaters in the vicinity and an unanticipated project that raised the railroad tracks that run adjacent to the facility by two feet have prevented the Quad-Cities River Bandits from playing at home through the first three weeks of the season.

Quad-Cities is scheduled to open a four-day, five-game homestand against Clinton on Thursday at Modern Woodmen Park and a conference call this afternoon between officials from the City of Davenport, the River Bandits and the Midwest League will determine if those games will be played in Davenport.

Representatives of the Houston Astros and Miami Marlins, parent clubs of the two teams scheduled to play in the Quad-Cities this week, have also been invited to participate.

If all goes well, gates for the River Bandits’ first home game of the season will open to the public at 5:35 p.m. on Thursday, 60 minutes before the scheduled first pitch.

A contingency plan is in place if the games can not be played in Davenport.

“We feel like we’re getting closer to being able to finally open the home season,’’ River Bandits general manager Jacqueline Holm said. “I think we’re all anxious for that to happen.’’

The River Bandits have had to move eight games of their 70-game home schedule to other venues in the first three weeks of the season, playing as the home team in games at Burlington, Cedar Rapids and most recently, in a neutral setting last week against Kane County at Peoria.

While the team has opened the season with an extended road trip, the River Bandits front-office staff worked out of a conference room provided by the Downtown Davenport YMCA until it was allowed to move back into its offices at Modern Woodmen Park last Thursday.

“While we appreciate everything the people at the Y did for us, it feels good to be back at the ballpark,’’ Holm said. “I know the players are anxious to get in there, too. Some of them haven’t even been inside since getting here from spring training.’’

The asphalt-covered elevated walkway is being built to the height of the new rail crossing by Carl Bolander & Sons Co., a St. Paul, Minnesota, company hired by the Canadian Pacific Railroad.

It is being built at a level that has been topped by only two floods in Davenport history.

The City of Davenport is installing the new ramp inside the stadium’s portable flood wall that was put in place in late March.

The fixes are considered temporary, but Holm suspects they will likely be in place throughout most if not all of remaining games during the 2019 season.

Parking areas west of the stadium remained covered by water Monday but even after waters recede, the newly-elevated railroad tracks will prohibit vehicle access until a new crossing can be constructed on Gaines Street.

The new elevated walkway into the stadium, constructed on top of a sidewalk that runs along the east side of Gaines Street south of its intersection with River Drive, will change access to parking areas north of the stadium.

The entry off of Gaines Street to that lot has been closed and the only entry point for the north lot will be located at the intersection of River Drive and Western Avenue.

“There will be some changes for fans coming to games and we ask for some patience as we work through it all. This should get us back to playing baseball in the Quad-Cities. It’s been a tough few weeks, but we’ve been taking things as they come,’’ Holm said.

“It’s been challenging. We’ve all gone from optimistic to disappointed and then back to optimistic again. In the past week, I think we’re finally seeing the light at the end of the tunnel and we’re excited to have baseball back.’’

A good Tuesday to all. The rain has passed bringing cooler temps to the Quad-Cities. Here are the weather details from the National Weather Service.

Noon update: A high in the mid-60s

Here's the afternoon forecast from the National Weather Service. Skies will gradually clear with a high near 64 degrees. North winds will prod…

Flooding from the Mississippi River around Campbell's Island in Hampton.

The Quad-City River Bandits opened the season on the road at Burlington because of the flooding around Modern Woodmen Park in Davenport, Thurs…

PEORIA — A day after getting no-hit, it took the Quad-Cities River Bandits' offense a few innings to get going Saturday, but it did just enoug…

Ask the Times: Who benefits when home baseball games are played out of town?

Q. What is the agreement between the River Bandits and opponent teams when they relocate games to the opponents stadium due to the flood? Do t…

Quad-Cities River Bandits employees use the partially completed ramp being constructed by Carl Bolander & Sons Co. of St. Paul, Minnesota, to access Modern Woodmen Park on Monday. The Canadian Pacific Railroad has raised the tracks along the Mississippi River near the park.

Workers work on building a ramp to match the level of the Canadian Pacific Railroad tracks near Modern Woodmen Park on Monday.