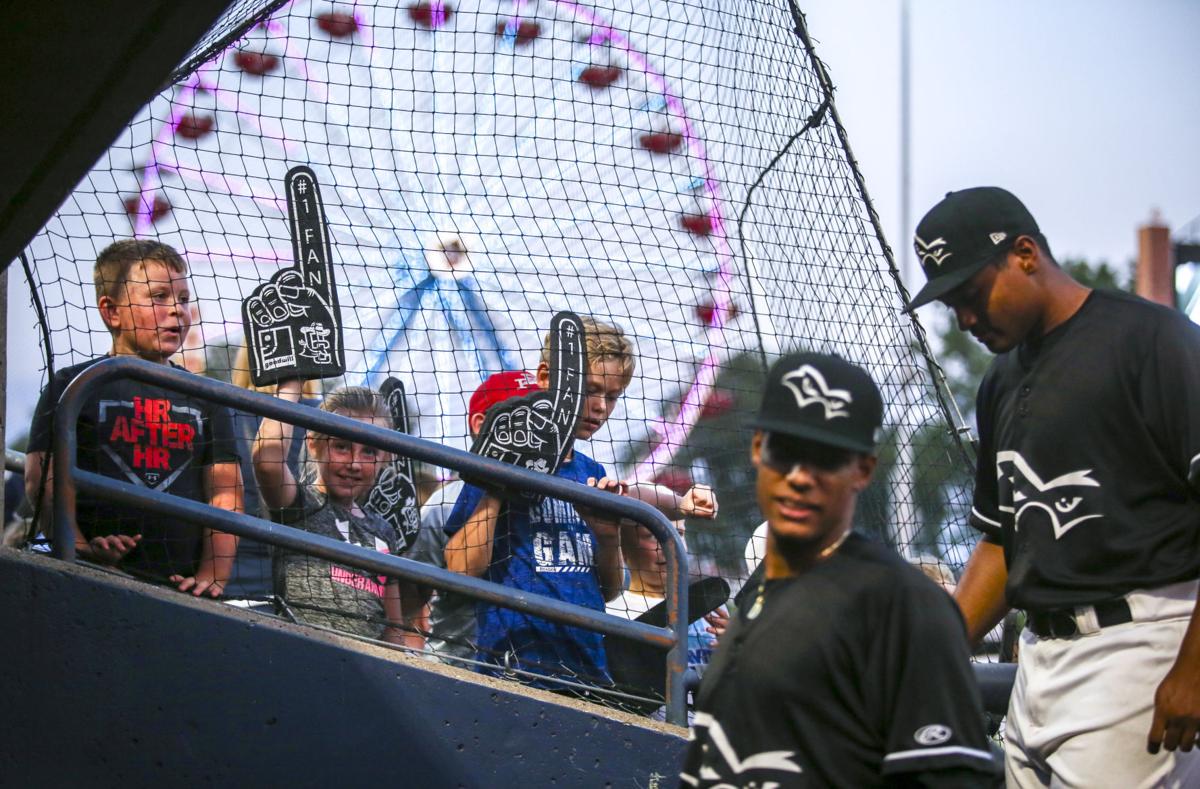 Young fans with foam fingers line the end of the dugout asking for game balls from Quad Cities River Bandits players during a game at Modern Woodmen Park in 2018. 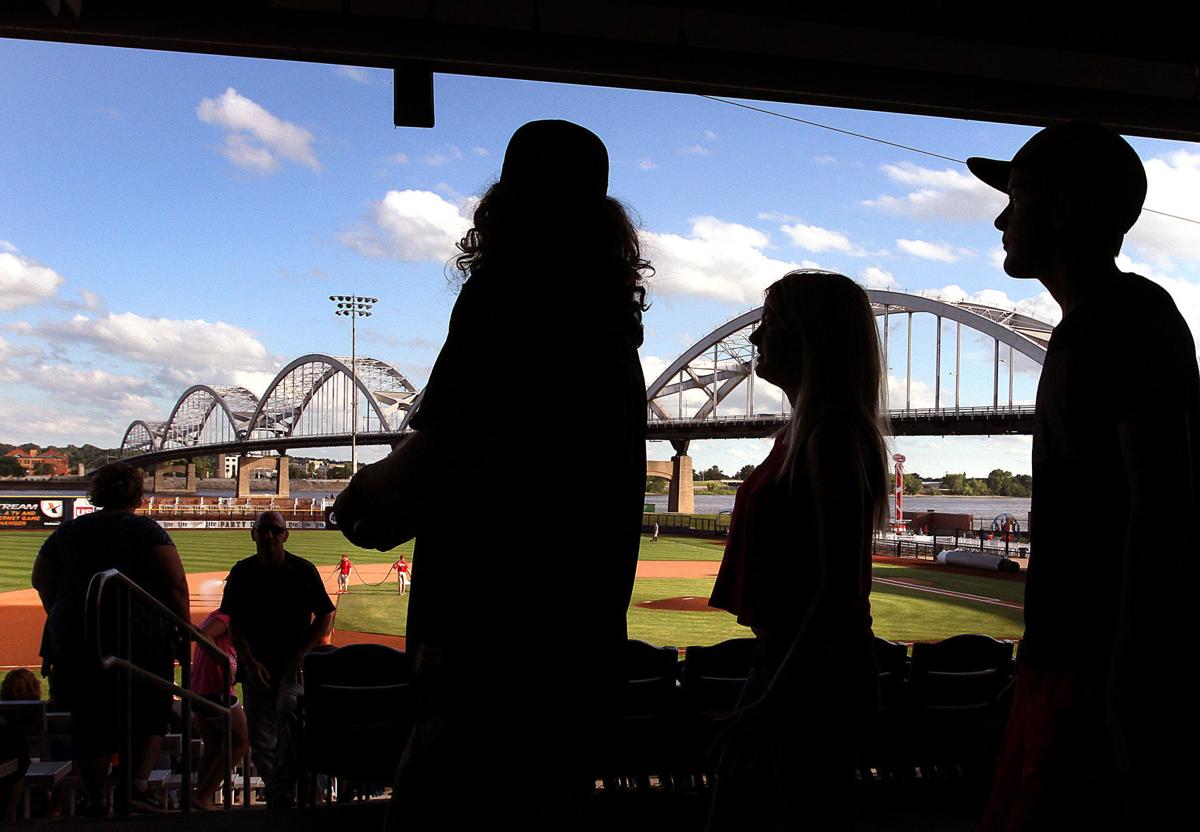 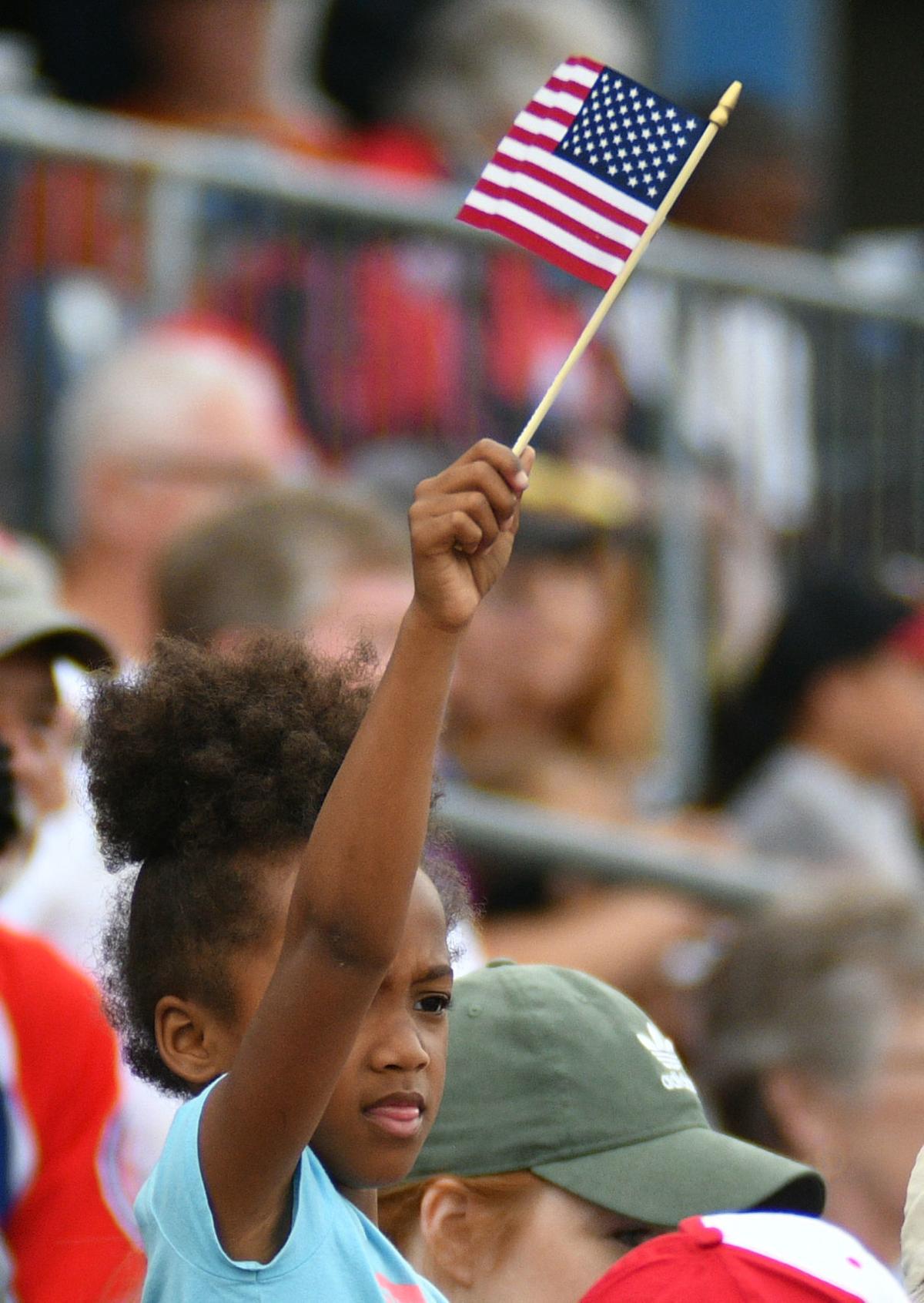 A fan holds up a small American flag in honor of Flag Day during a 2018 Quad Cities River Bandits game against the Clinton LumberKings at Modern Woodmen Park in Davenport. 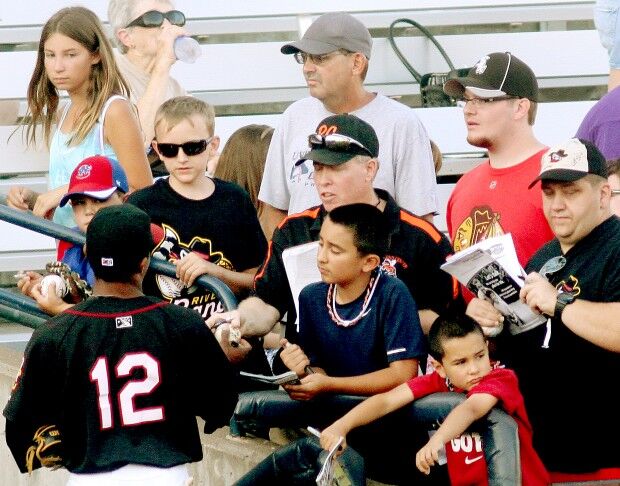 Current Oakland Athletics infielder Tony Kemp, playing for the Quad Cities River Bandits shortly after being taken by the Astros in the 2013 draft, signs autographs for fans at Modern Woodmen Park.

Uncertainty remains about the only certainty for the Quad Cities River Bandits and Clinton LumberKings these days.

River Bandits owner Dave Heller said he remains "completely confident" that the 60-year-old Quad Cities Midwest League franchise will be part of affiliated baseball when minor-league teams resume competition after having the 2020 season end before it started because of the COVID-19 pandemic.

In Clinton, LumberKings general manager Ted Tornow believes there will be baseball at NelsonCorp Field in 2021, but concedes, "Is it going to be affiliated baseball? That’s a good question."

That is among many unanswered questions that minor-league baseball team operators are confronting three days before two important contracts expire.

The Professional Baseball Agreement expires on Wednesday. That is the contract which ties Major League Baseball with Minor League Baseball, the organization which governs the current collection of 160 minor-league teams affiliated with major-league clubs.

The River Bandits and LumberKings also both have expiring player development contracts with their current major-league affiliates, Houston in the case of Quad Cities and Miami as the parent club of Clinton.

Those two-year contracts were set to expire in 2020 but are overshadowed by a plan that will likely change the face of professional baseball in communities across the country.

Preliminary talks between the two parties went nowhere and now, Major League Baseball has effectively allowed the clock to run out on the existing agreement.

Under its plan, the minors would be run out of Major League Baseball’s headquarters in New York City where league coordinators would assume duties handled for more than a century by league presidents and staff members.

The makeover would include reducing the number of affiliated teams from 160 to 120 — four per major-league team — although more than 40 minor-league teams could be cut as several current independent league clubs are positioned to become minor-league affiliates.

At the major-league level, clubs have reduced scouting and minor-league player development staffs in preparation for the changes.

Major League Baseball has kept the wraps on its most recent list of teams that would be "contracted" from affiliated baseball.

"It’s the uncertainty that makes things difficult," Tornow said. "Everybody would like to be in a position to begin planning for 2021, but right now nobody is in a spot to do that. There is no schedule to build around, no real guarantee about anything other than that negotiations are taking place and we all have to wait to see where it leads."

Tornow said he holds out hope there will be a spot for the LumberKings in affiliated baseball in 2021.

"They haven’t told us ‘no’ at this point, so there is a chance," Tornow said, adding that options of competing as a co-op team or finding a home in independent or college-age wood-bat leagues remain.

"We’ve been here for 80-some years and we’ll be here playing baseball in 2021. I firmly believe that," he said.

Heller sees the same for the River Bandits and he believes strongly that the Quad Cities club will remain in affiliated baseball in 2021 and beyond.

"We are completely confident in saying that. I just hope that there is a vaccine (for COVID-19) and that everybody has a chance to get inoculated against the virus," Heller said. "We all want things to return to normal where people in the community can come together again and get back to enjoying a night out at the ballpark cheering on the River Bandits."

Commissioner Rob Manfred, addressing the plan last month, said that Major League Baseball will work to preserve "some sort of baseball" in every community that currently has an affiliated team.

Major League Baseball has suggested that its plans also includes the restructuring of leagues for geographical purposes as well as the elimination of rookie and short-season Class A levels from the game.

The plan would also reportedly put Major League Baseball in charge of merchandising and broadcast rights at the minor-league level with a proposed split in net revenues.

It is a plan that fits under the umbrella of what Manfred has throughout his five-year tenure called his "One Baseball" vision, a plan that would put all levels of the game from Little League through the majors under one leadership structure.

Within the past week, Major League Baseball announced agreements with three independent leagues which will provide experimental opportunities for the game and create marketing ties between the groups.

On Friday, Major League Baseball announced that the rookie-level Appalachian League will become a college wood-bat league in 2021, a move facilitated by the fact that major-league teams own all 10 teams in the league and contract operations of those teams out to local individuals.

The move is just the first domino in several that could fall for existing minor-league clubs, who could see drastic changes in their business structures.

The existing set-up differs from the relationships that exists in other professional sports.

Currently, major-league parent clubs pay the salaries of minor-league players and coaches and cover the majority of the costs for baseball equipment.

Their minor-league affiliates such as the River Bandits and LumberKings generally cover travel costs, a portion of equipment costs and other ballpark expenses.

Affiliations have typically been cooperative agreements between a major-league club and a minor-league partner. Those player development contracts can last two or four years.

In the plan under consideration, major-league teams will select their own affiliates — four apiece representing one at each level of a restructured minor-league system — and minor-league clubs will have no input in the process.

Major League Baseball will be involved in that process, facilitating the restructuring of leagues that could include some franchises shifting from one league to another.

Geography will be more of a factor in how leagues are realigned with an objective of reducing travel.

The makeover, which could see, for example, the Midwest League shift from a 16-team alignment to a 12-team grouping, could also be accompanied by a change in the level of competition.

Some franchises currently at the low-A level could be shifted to high-A or AA leagues. Others could see their entire league move from one level to another.

The details — including which minor-league clubs will remain in the game and which will be looking at a different future — remain at best unclear and to a degree undetermined.

At a time when all minor-league clubs are dealing with financial losses created by the coronavirus situation which led to the cancellation of the 2020 minor-league season, the expiring contract has left Major League Baseball in a position of power as the current Professional Baseball Agreement expires.

"Right now, there are a lot of questions still unanswered," Heller said.

Ultimately, Heller expects a great deal of change to be on the horizon, although fans attending future games at Modern Woodmen Park may not notice many differences.

"I do believe there will be significantly enhanced facility standards that we will be required to meet moving forward, but the vast majority of them will involve player and player-related facilities," Heller said.

He expects minor-league clubs will be asked to supply space for expanded strength and conditioning facilities, areas that will provide additional nutrition for players, video rooms and locker rooms to facilitate female coaching staff members.

"We will be expected, required, to have those areas at Modern Woodmen Park," Heller said. "I’m anticipating those changes, although they won’t be visible for fans coming to the ballpark."

With no schedule to work with for 2021 and no firm idea what shape a season may take, planning for the future has taken on a different look.

"You really can’t book any other events for the ballpark next year because you have no idea when the team will be home," Heller said.

Tornow said he continues to talk with the LumberKings’ business partners, maintaining relationships that will help the organization move forward when details are set.

"We’re doing the things we can do to be ready to move forward when that time comes," Tornow said.

Heller said the 10 employees on the River Bandits staff are doing what they can to keep Modern Woodmen Park a busy place.

The River Bandits continue to host Friday and Saturday movie nights on a new video board that was scheduled to debut in the 2020 season, and receptions and business meetings continue to be held at the ballpark.

"The staff is keeping busy and we’re talking a lot about how to create the best experiences possible for fans when people can come back to games again," Heller said. "Right now, that’s about all we can do."

South Bend scored three times in the bottom of the eighth inning to hand Quad Cities a 7-4 loss at Four Winds Field in both teams' season opener.

Young fans with foam fingers line the end of the dugout asking for game balls from Quad Cities River Bandits players during a game at Modern Woodmen Park in 2018.

A fan holds up a small American flag in honor of Flag Day during a 2018 Quad Cities River Bandits game against the Clinton LumberKings at Modern Woodmen Park in Davenport.

Current Oakland Athletics infielder Tony Kemp, playing for the Quad Cities River Bandits shortly after being taken by the Astros in the 2013 draft, signs autographs for fans at Modern Woodmen Park.