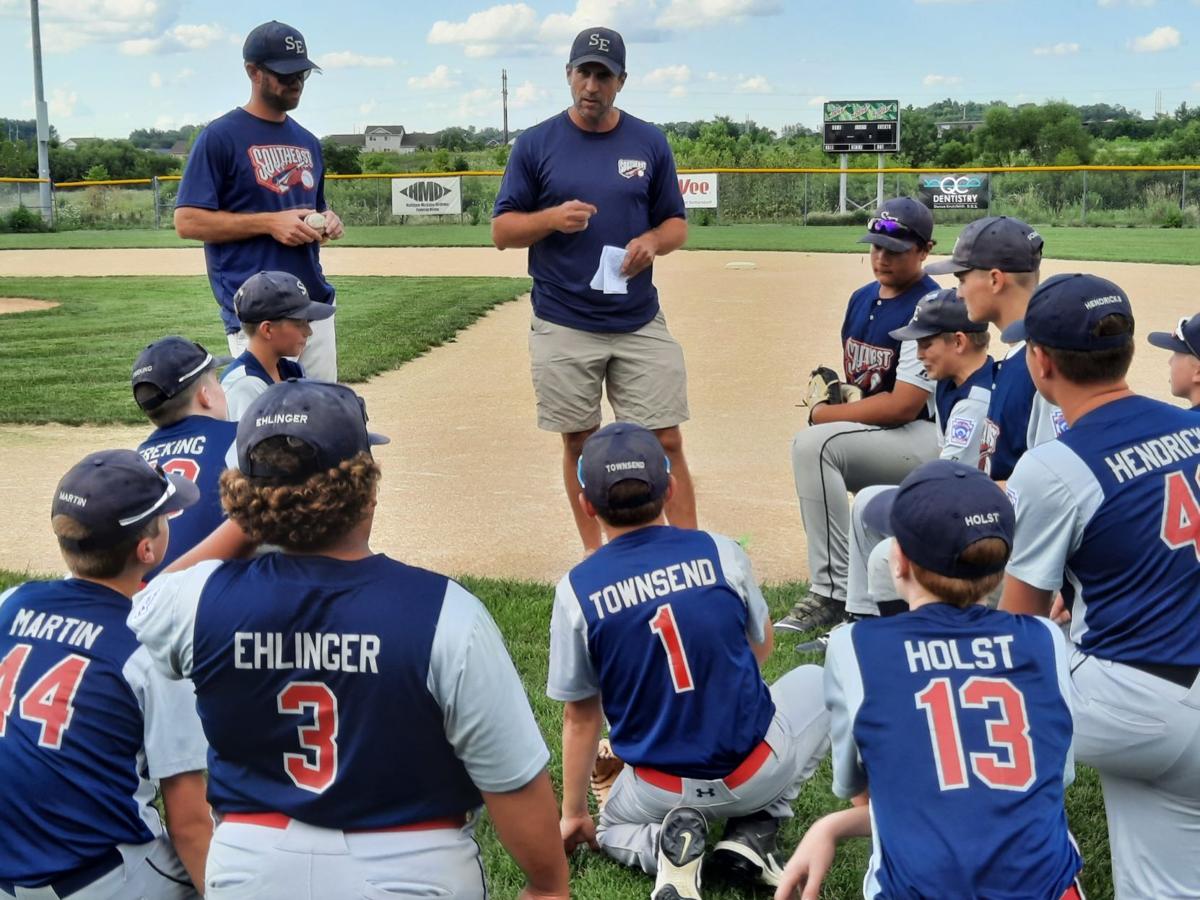 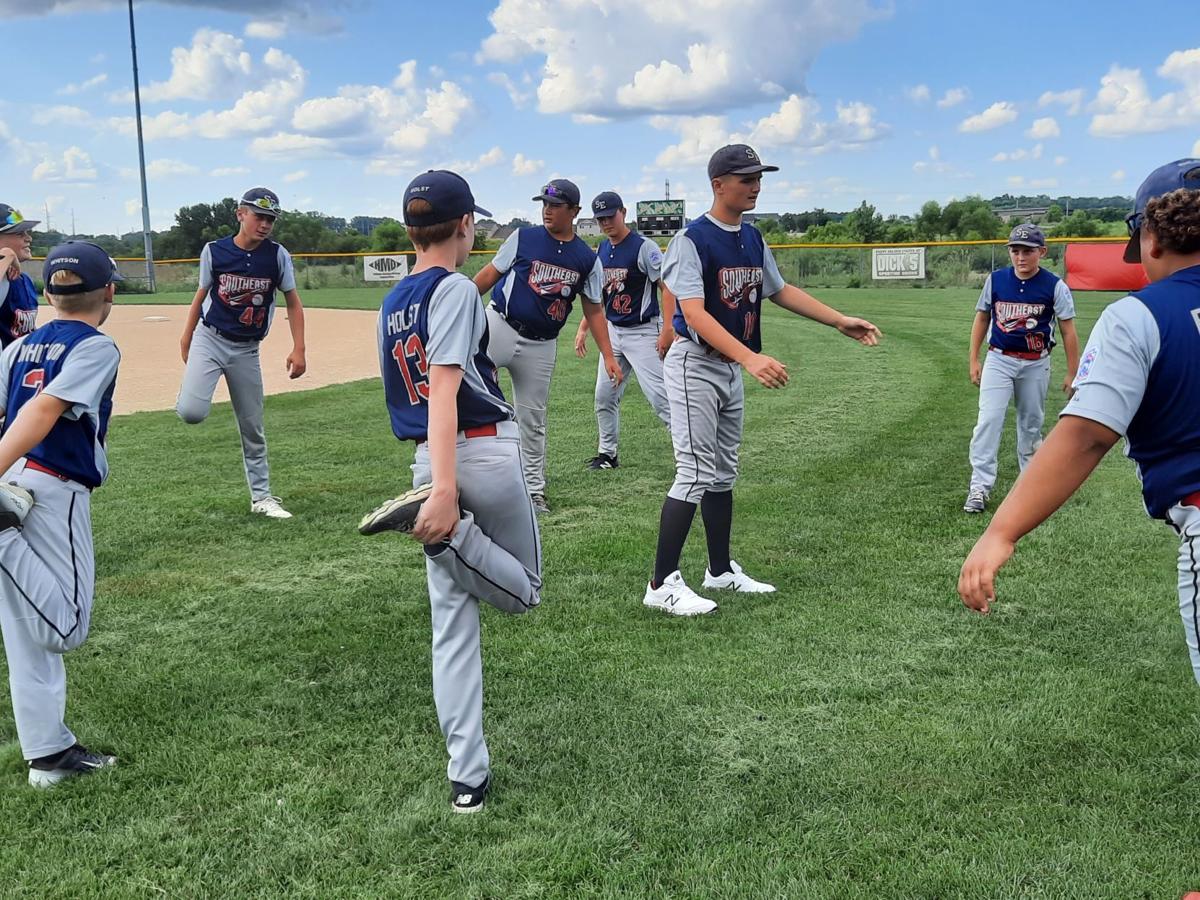 Players on the Iowa state champion Davenport Southeast All-Stars Little League team stretch prior to the start of a practice Monday at Prairie Heights Park in Davenport. The team began play in the Little League Midwest Regional on Saturday with a loss to Sioux Falls.

Williamsport and the Little League World Series, for young baseball players it just doesn’t get any better than that.

After winning an Iowa state championship last weekend, the Davenport Southeast Little League All-Stars are now working to turn those dreams into a reality.

"We’ve done special things already, but just like the state tournament it’s still one pitch at time," said Tanner Bitterman, who plays multiple positions for the Southeast team that begins play in the Midwest Regional on Saturday at Whitestown, Ind.

"This team works hard and plays hard and just takes things pitch by pitch. It’s been that way since the beginning of the season. That doesn’t change now."

It’s been a special summer for the Southeast Little League, which fielded 35 teams and provided playing opportunities for 418 youths who live in southeast Davenport and the entire cities of Bettendorf and LeClaire.

The 12U team which will face Sioux Falls, S.D., in its regional opener at noon on Saturday, won the Iowa state tournament last weekend in Sioux City, defeating Johnston 7-6 in 10 innings to send the Southeast All-Stars into regional play as the Iowa state champion for the first time since 1975.

Southeast Little League teams also won the Iowa state 10U and 11U championships this year, the first time a team from its district won all three state titles in a single year.

The 12U team dominated its foes in District 2, outscoring opponents 89-6 to win all five games it played in the district tournament.

And once reaching the state tournament, the Southeast All-Stars were tested, finishing 5-1 on its way to qualifying for the seven-team Midwest Regional. They experienced a walk-off win and extra-innings success to claim their title.

"We had to earn it. We won a lot of close games at state," said Sean Hendricks, a pitcher and first baseman. "I think that is making us a better team. We had to make plays, get hits and make outs. That will help us now because we know what it takes to win close games."

Two of the seven teams in the Midwest Regional will advance to the Little League World Series, a change made to this year’s tournament, which will limit competition to teams from the United States because of COVID-19 concerns.

In addition to the teams from Davenport and Sioux Falls, the field for the regional includes state champion qualifiers from Pittsburg, Kansas; Circle Pines, Minn.; Columbia, Mo.; Hastings, Neb. and Fargo, N.D.

"We know we’re going to play some good teams there, but we’ve shown that we’re a good team, too," outfielder Jonah Whitson said. "It’s going to be a great experience, and for us to move on would be great. We have to play hard and communicate, just like we’ve been doing."

David McFate manages the team, which consists of top players from teams throughout the Southeast Little League, selected in early June and working to build team chemistry and cohesion in the weeks since.

"These guys have grown up playing ball together and the majority of them have played for three different travel ball teams in the past," McFate said. "It’s a good group that loves the game and they like being around each other. They don’t want to go home at night when games or practices are over."

McFate believes his team has a good blend of what it takes to be successful as it moves forward in regional play.

The team of 11- and 12-year old players has some size, which translates to power potential at the plate and complements some quickness on the roster.

The group is solid defensively, has good pitching depth and a productive offense to complement the right demeanor.

“This team has shown a lot of fight, they never give up and they play together exceptionally well," McFate said. "They’ve had success at every level coming up and while a few of the names have changed from one year to the next, they’ve never lost that focus or want to win."

Riley Ehlinger, who plays a multitude of positions for Southeast, said the team enjoys more than the games.

"A lot of practice and working together is how we’ve gotten this far," Ehlinger said. "There are a lot of good players on this team and we like to practice and get better. We know that is important."

Right now, what is important is preparing for that next game.

McFate said the team’s ability to focus on its objectives and concentrate on its play will determine its success at the double-elimination regional which runs through Aug. 14.

Schaich expects Southeast to be ready.

"This is what we’ve been working for," Schaich said. "We know that Williamsport is out there, but just like last week at state, we have to earn it one game at a time. As long as we do that, we will get to where we want to be."

Hochman: The Cardinals’ 2022 rotation, with newcomer Matz, should (must!) walk fewer batters

The teams with the two-lowest walks-per-nine last year were very successful.

As part of the Cardinals' midseason overhaul of the bullpen, veteran reliever had a sinker and a 62% groundball rate that put the defense to work.

MLB is operating under a business as usual idea, though the league knows things could soon get very unusual

The prevailing line right now across MLB — a league facing a lockout if a new collective bargaining agreement isn’t signed by Dec. 1 — is that things are business as usual.

Players on the Iowa state champion Davenport Southeast All-Stars Little League team stretch prior to the start of a practice Monday at Prairie Heights Park in Davenport. The team began play in the Little League Midwest Regional on Saturday with a loss to Sioux Falls.