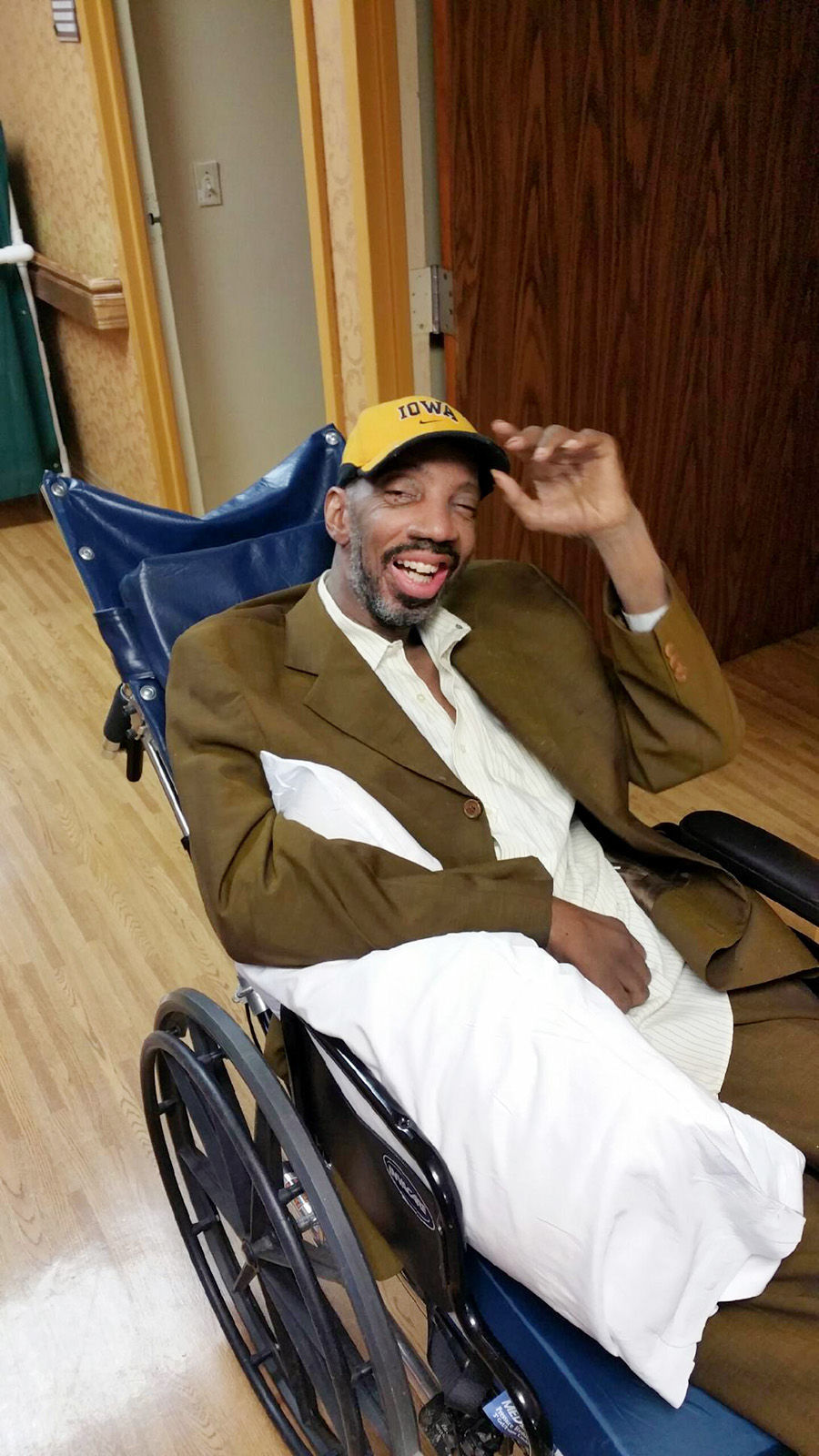 Kenny Arnold, 57, is shown this fall at his residence in a skilled nursing facility in Chicago. Arnold starred for the Iowa men's basketball team in the early 1980s before he was diagnosed with brain cancer in 1985. 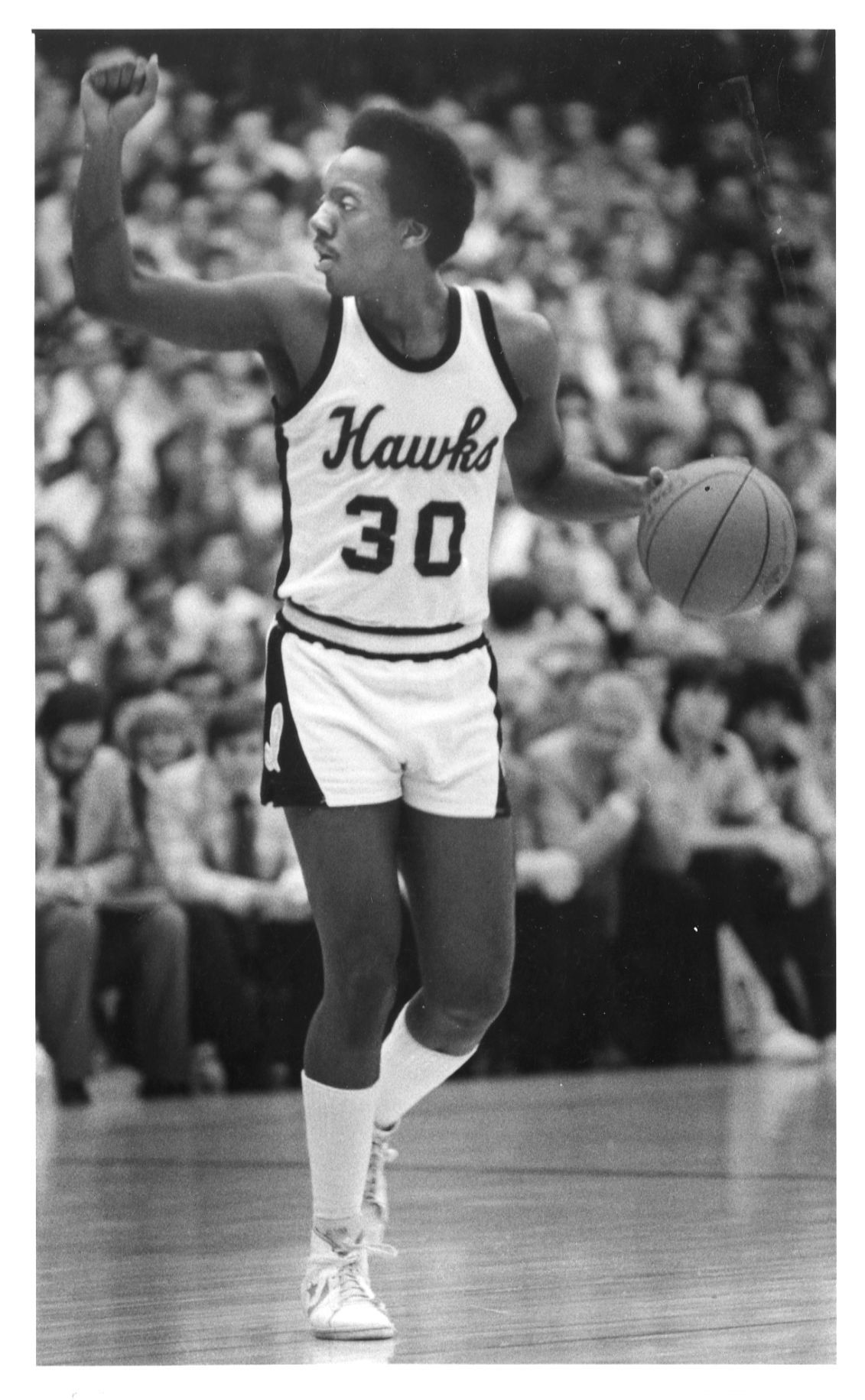 Kenny Arnold led the 1980 Iowa Hawkeyes Final Four team in scoring and assists. He was diagnosed with a malignant brain tumor in 1985, three years after his college playing career ended. 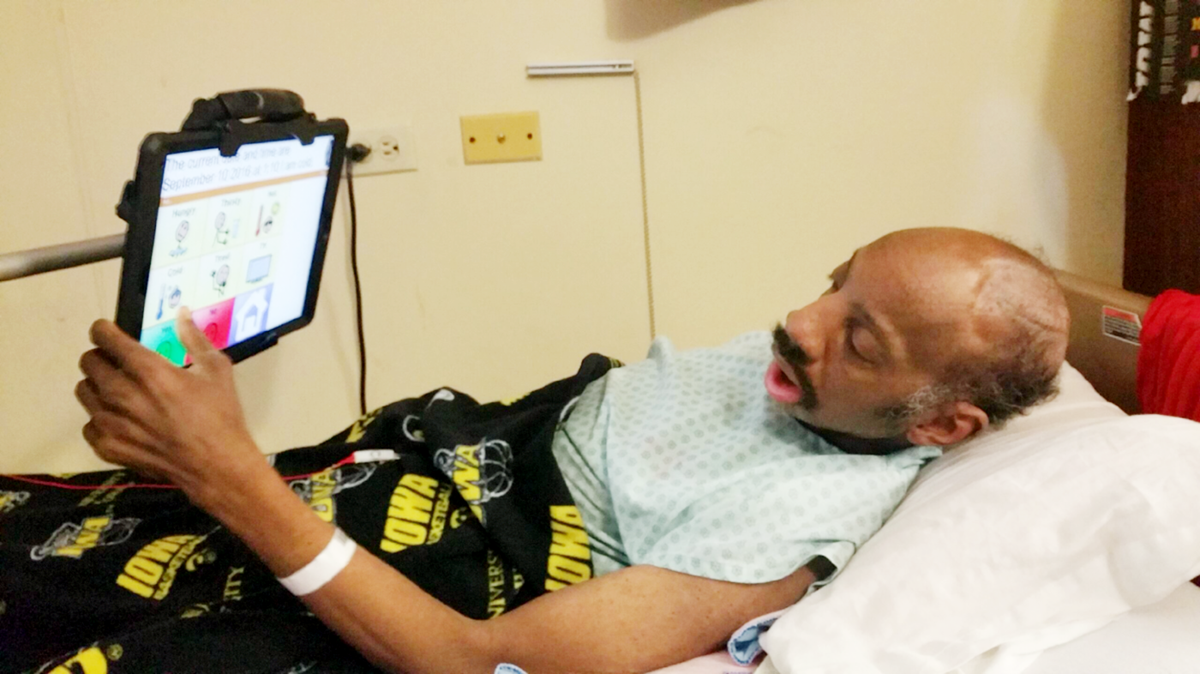 Kenny Arnold, who lost the use of his right side due to a series of strokes, taps a computer screen that allows him to communicate. Arnold was a standout on Iowa's last Final Four team in 1980.

IOWA CITY — Just over a decade ago, 6-foot 8-inch Mike Henry picked 6-foot 2-inch Kenny Arnold up from a rental car in Tucson, Arizona. He grabbed Arnold around the waist and slung him over his shoulder. He then marched into the athletic complex at the University of Arizona in search of Coach Lute Olson.

Arnold and Henry were 46 at the time, teammates on the 1980 Iowa Hawkeye basketball team that made a magical run to the Final Four. Arnold led that team in scoring and assists.

No assist, though, would be bigger than this, Henry literally carrying his sick, emaciated teammate to find their silver-haired mentor, a man who would connect his former guard with medical pros who had answers.

Arnold, a Chicago native, was diagnosed with a malignant brain tumor in 1985, three years after his stellar collegiate career ended. He was 25 and working out in Iowa City that summer when he fainted twice. Doctors found the tumor, but determined surgery was too risky. Instead, they attacked it with radiation and chemotherapy.

Arnold detailed his fight in a number of speaking engagements in Iowa that year and the next. He detailed the determination he needed against this new opponent, one much tougher than any Big Ten basketball foe.

Three decades later, Arnold continues his fight, armed with a positive mental attitude and incredible teammates, starting with the man who would captain his collection of advocates: Mike Henry.

“Kenny and I were born on the same day, June 7, 1959,” Henry says from his home near Chicago. “I met Kenny 40 years ago at a basketball camp. I was the first to meet him when he came to the University of Iowa.”

The bond has grown stronger, all but cemented in that westward journey 11 years ago, a trek Olson funded.

The 1980 Hawkeye team had gathered in Iowa City for a 25th anniversary of its Final Four berth. Arnold, who had told his teammates his health was fine, didn’t want to make the trip from Chicago. That’s when an insistent Ronnie Lester, the star of that squad, flew from Los Angeles, where he worked for the Lakers, to Chicago, and drove Arnold to the reunion.

Arnold’s weight had plummeted to 130 pounds. Henry, who had visited by phone with his buddy several times that winter, was shocked by his appearance. They all feared his cancer had come roaring back.

“Lute provided airplane tickets and told us to get Kenny to Arizona,” Henry says.

The pair flew to Tucson and rented a car to drive to the athletic facilities at Arizona, where Olson coached. Doctors in Tucson, where Olson's wife, Bobbi, had been treated for cancer, ran tests, and concluded that Arnold’s outdated anti-seizure medication had caused much of his muscle mass to atrophy, leading to problems that have persisted for a decade.

Arnold now resides in a nursing home on the south side of Chicago. His parents are both deceased. He has one sibling in Chicago and his Iowa basketball “brothers,” men who call themselves “Teammates for Life.”

Through the years they’ve been credited with other “assists.” They visit Arnold and keep Iowans updated on his condition. Sadly, his spirits sank this summer as an abdominal aneurysm kept him bedridden. His ability to communicate was increasingly compromised due to a series of mini strokes.

Late this summer, Henry shared an update with Pat Harty, an Iowa City-based writer with AllHawkeyes.com. Marty Gallagher, of Storm Lake, Iowa, read Harty’s report concerning Arnold’s condition and his struggle to communicate. Gallagher, CEO of Talk To Me Technologies, which manufactures and distributes speech-generating devices and related accessories, reached out and connected with Henry. In August, Gallagher and Matt Dunning, chief technology officer for Talk To Me Technologies, which is based in Cedar Falls, Iowa, traveled to Chicago to assess Arnold’s needs.

“Kenny could very slowly get a word out,” Gallagher said. “We had him try a device and he was able to move his left arm and could identify messages to press, which help him communicate about pain, health concerns and basic needs. He can also access social messages that he can share with friends and former teammates.”

Talk To Me Technologies provided a Wego 10A speech device that has since been upgraded to a Zuvo12, which allows Arnold to tap his finger to communicate his needs, navigate Facebook and YouTube videos, including the 1980 Final Four game in which Iowa lost to Louisville despite Arnold’s 20 points and five assists, numbers he amassed while competing with a broken thumb.

“Kenny’s attitude turned around with that tablet,” Henry said. “The combination of pain and not being able to communicate had taken so much out of him. This summer, for the first time, he’d grown depressed. Now that he can communicate, we’ve got that ‘Old Kenny’ spark back.”

Henry continues to visit his teammate several times per week. Last week, he launched an effort on Facebook to raise funds for Arnold by selling shirts emblazoned with his jersey No. 30 and a “Teammates for Life” logo. The shirts, designed by Gallagher’s son, Ben Gallagher, are being sold for $30 on a Kenny Arnold Fund Facebook site.

“Ben designed these shirts for a small group of us,” Henry said. “But then I posted a picture of one of the shirts on Facebook and I had over 100 requests in the first day as Iowa fans and friends of Kenny wanted to know where they could get one.”

Henry’s hope is that this effort generates a little cash for Arnold to tap to boost his quality of life as he fights. In due time, there may be seed money for an Iowa scholarship bearing his name. Henry said he and his teammates will do all they can to help their old Hawkeye mate.

“A few years ago, Vince Brookins (a member of the 1980 Hawkeye team) and I were with Kenny and we were complaining about our day-to-day stuff,” Henry says. “And then we caught ourselves, because he’d been through so much and had never complained.”

According to Henry, Kenny Arnold still hasn’t. Rather, he figures he drew the short straw — brain cancer — as part of God’s plan; because has the strength and determination to keep fighting, and a quiet ability to show others they can, too.

Kenny Arnold, 57, is shown this fall at his residence in a skilled nursing facility in Chicago. Arnold starred for the Iowa men's basketball team in the early 1980s before he was diagnosed with brain cancer in 1985.

Kenny Arnold led the 1980 Iowa Hawkeyes Final Four team in scoring and assists. He was diagnosed with a malignant brain tumor in 1985, three years after his college playing career ended.

Kenny Arnold, who lost the use of his right side due to a series of strokes, taps a computer screen that allows him to communicate. Arnold was a standout on Iowa's last Final Four team in 1980.