Final Four has changed since Moline natives were involved
Share this
× 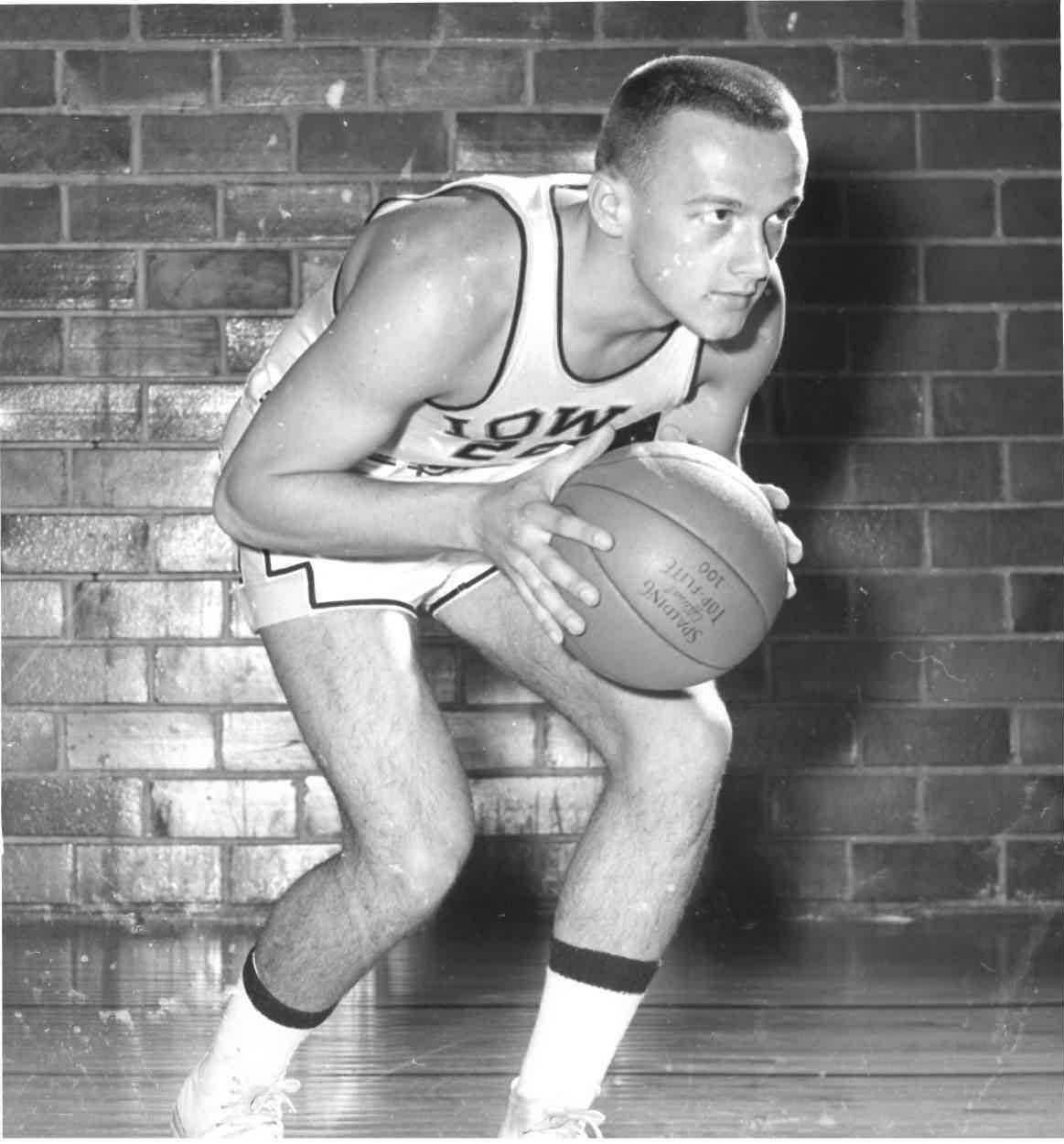 Bill Seaberg was one of three Quad-Citians who played on the Iowa basketball teams that made it to the Final Four in 1955 and 1956. 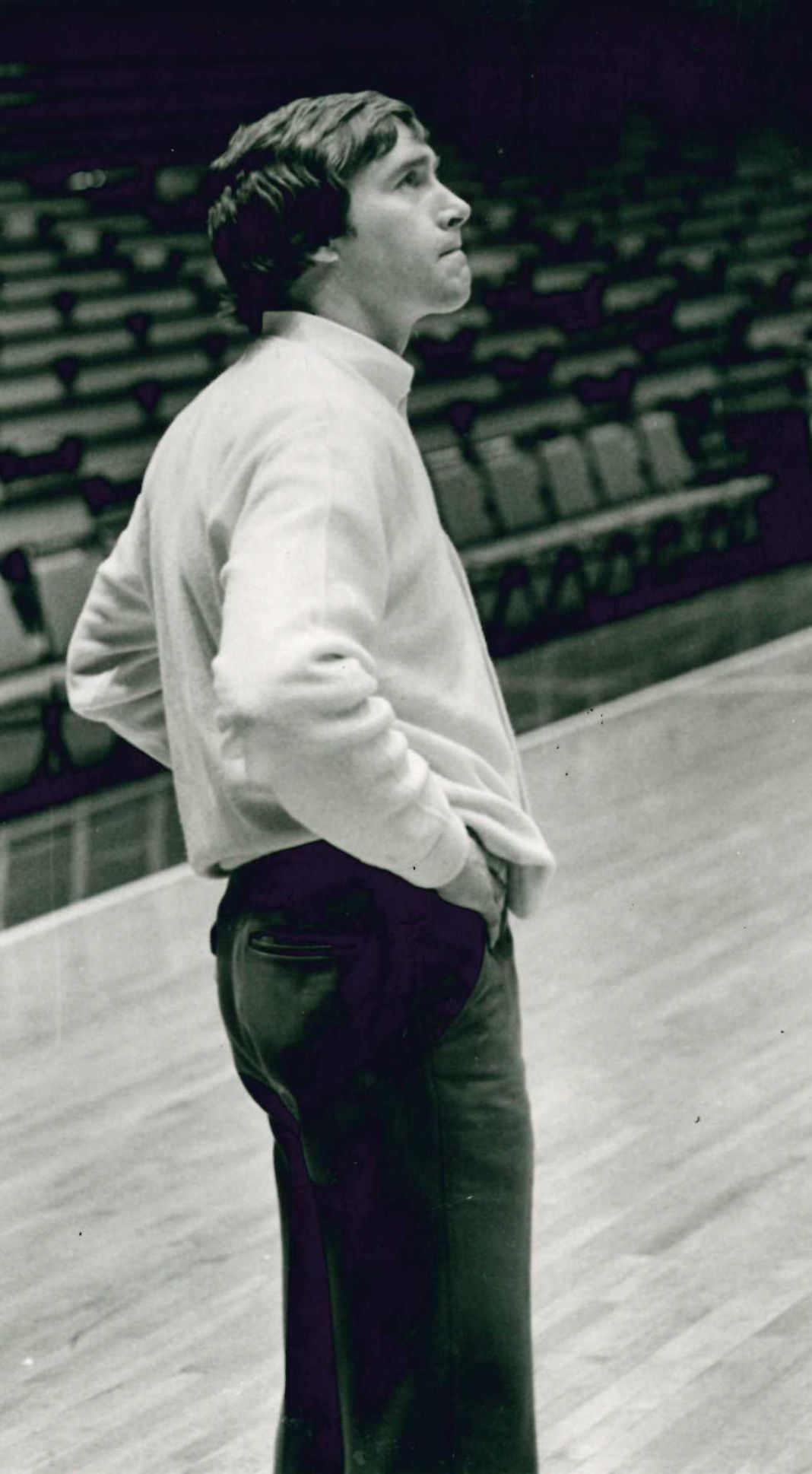 The Final Four has changed quite a bit since Bill Seaberg and Jim Rosborough first became involved in it.

There was much less national hype and hoopla back then.

The term “Final Four’’ wasn’t even used in the 1950s. ESPN, which had more than 14 million entries in its bracket contest this year, was just getting started in 1980.

But Seaberg and Rosborough, both Moline natives, agree on one thing: The intensity and excitement attached to the games was still there, just as it will be tonight when the NCAA championship game is played in Phoenix.

Seaberg recalls that there were no empty seats at Northwestern’s McGaw Hall when he and his Iowa teammates took on Bill Russell and San Francisco in the 1956 national championship game.

And Rosborough recalls that there were almost no empty seats in the Iowa Fieldhouse when the Hawkeyes returned home from Philadelphia after clinching their Final Four berth in 1980. It was after midnight and 12,000 fans were sitting there waiting to greet them.

“That was the amazing thing,’’ said Rosborough, now 72 and living in Tucson, Arizona. “That’s when it really hit you that we’re going to the Final Four. Holy smokes. That was really cool.’’

It wasn’t Rosborough’s last Final Four experience. After nine years as an assistant under Lute Olson at Iowa, he followed Olson to Arizona and was on the bench at the Final Four in 1994, 1997 and 2001.

The Wildcats won the national title in ’97 in Indianapolis, but none of those Arizona experiences felt quite like 1980 at Iowa.

Rosborough, who is still involved in coaching as an assistant for the women’s team at Pima Community College, said that season is “semi-blurry’’ for all the things that happened.

The Hawkeyes’ other top assistant coach, Davenport native Tony McAndrews, was nearly killed in a plane crash in February and was unable to coach the rest of the season. Star guard Ronnie Lester injured his knee in the middle of the season although he managed make it back for the NCAA tournament.

The Hawkeyes got on a roll in the tournament and defeated Virginia Commonwealth, North Carolina State, Syracuse and Georgetown to reach the Final Four before being stopped by eventual national champion Louisville.

“1980 was just kind of a miracle thing …’’ Rosborough said. “But it was certainly a really cool thing. But probably the highlight was coming back into the fieldhouse that night. I’ve never seen anything like that.’’

Seaberg, who is 82 and has lived most of his life in Evergreen, Colorado, said one big change he has seen in the Final Four and in college basketball in general since his playing days is the players themselves.

Seaberg was one of three Quad-Citians on those Iowa teams who played in the Final Four in the mid-1950s. He and Rock Island native Sharm Scheuerman were the starting guards and Moline’s Augie Martel came off the bench.

Seaberg said the starting unit that came to be known as the Fabulous Five was successful because of team chemistry. He, Scheuerman, Logan, Carl Cain and Bill Schoof were put together as a group when they first arrived on campus in 1952 and they remained together for four years.

Freshmen could not compete at the varsity level then, but head coach Bucky O’Connor knew what he had.

“It was a big secret,’’ Seaberg said. “Bucky told the players ‘Don’t let anybody know that my freshmen beat the varsity.’ When we scrimmaged them, he knew we had something going good with our chemistry, but he didn’t want anybody to know that we beat the varsity when we played them in practice.’’

The Fabulous Five went 17-5 as sophomores, 19-7 while winning the Big Ten championship as juniors and 20-6 when they won the Big Ten again in 1956.

They lost to LaSalle in the national semifinals in 1955 — Seaberg, the team MVP that year, injured his ankle early in the game — but in 1956 they seemed unstoppable. The Hawkeyes defeated Morehead State, Kentucky and Temple, and roared into the championship game against San Francisco with a 17-game winning streak.

Iowa held an early lead, but by halftime San Francisco was ahead 38-33. Russell, destined to become the center of the Boston Celtics dynasty in the NBA, ended up with 26 points and 27 rebounds in an 83-71 victory.

“Bill Russell finally decided to play basketball the last half,’’ Seaberg said. “He was such a dominating force. He kind of controlled the game the second half.’’

Like Rosborough, Seaberg still watches college basketball as much as he can on television and he still occasionally gets out and shoots a little. He was playing pickup games into his 70s.

Many of his old teammates have passed on. Scheuerman died in 2010 and Seaberg said Martel succumbed to cancer within the past month.

“I still talk to Schoof and Cain a couple of times a year,’’ he said. “Schoof’s got bad ankles. He’s got braces. And Carl, he’s got bad knees. At least I can still jog and jump a little bit.’’

Bill Seaberg was one of three Quad-Citians who played on the Iowa basketball teams that made it to the Final Four in 1955 and 1956. 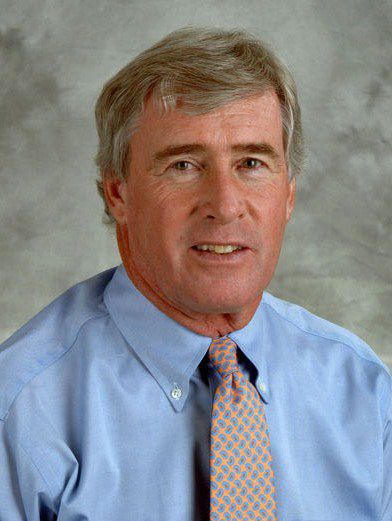 Jim Rosborough during his years as an Arizona assistant coach 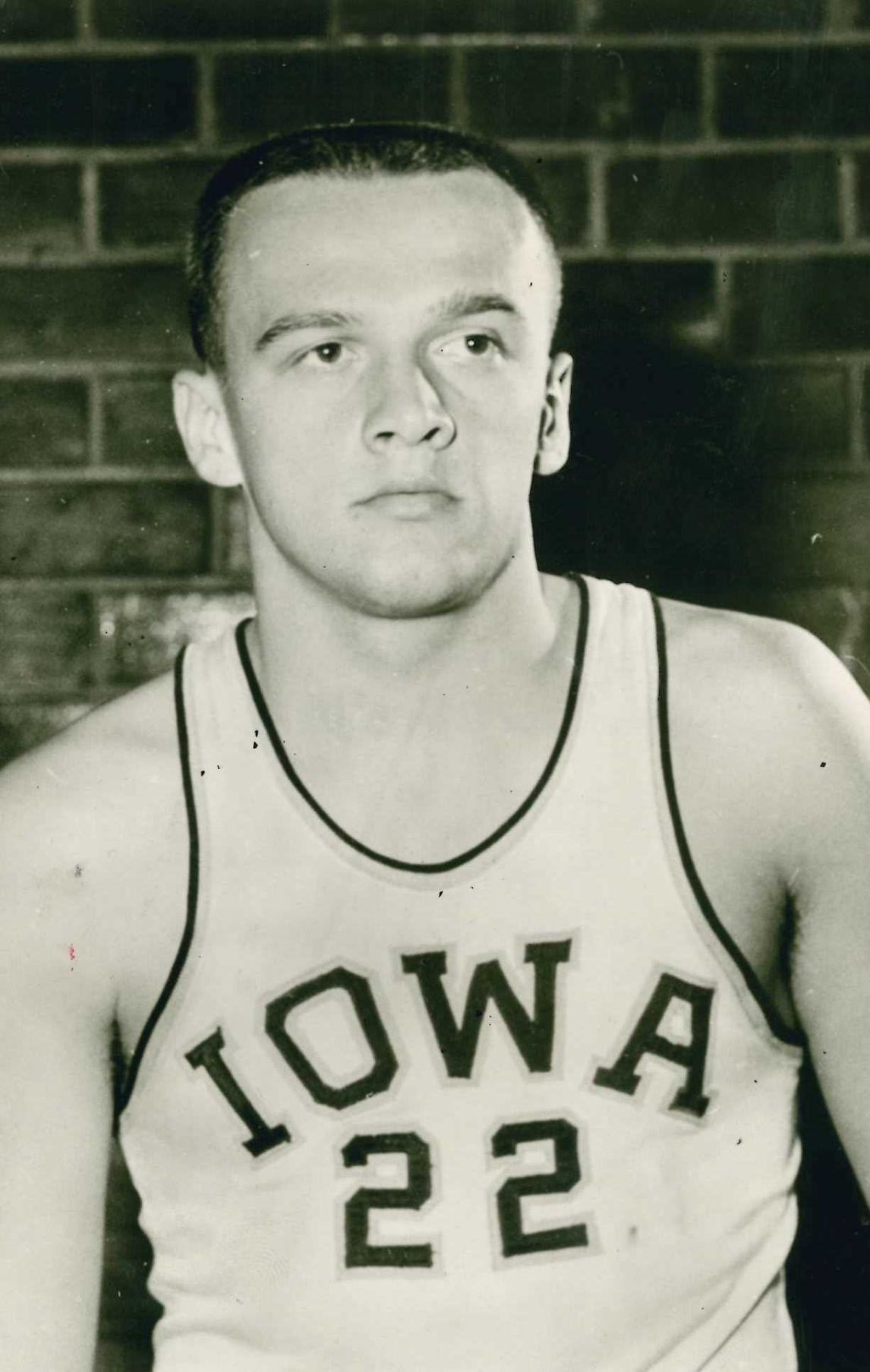 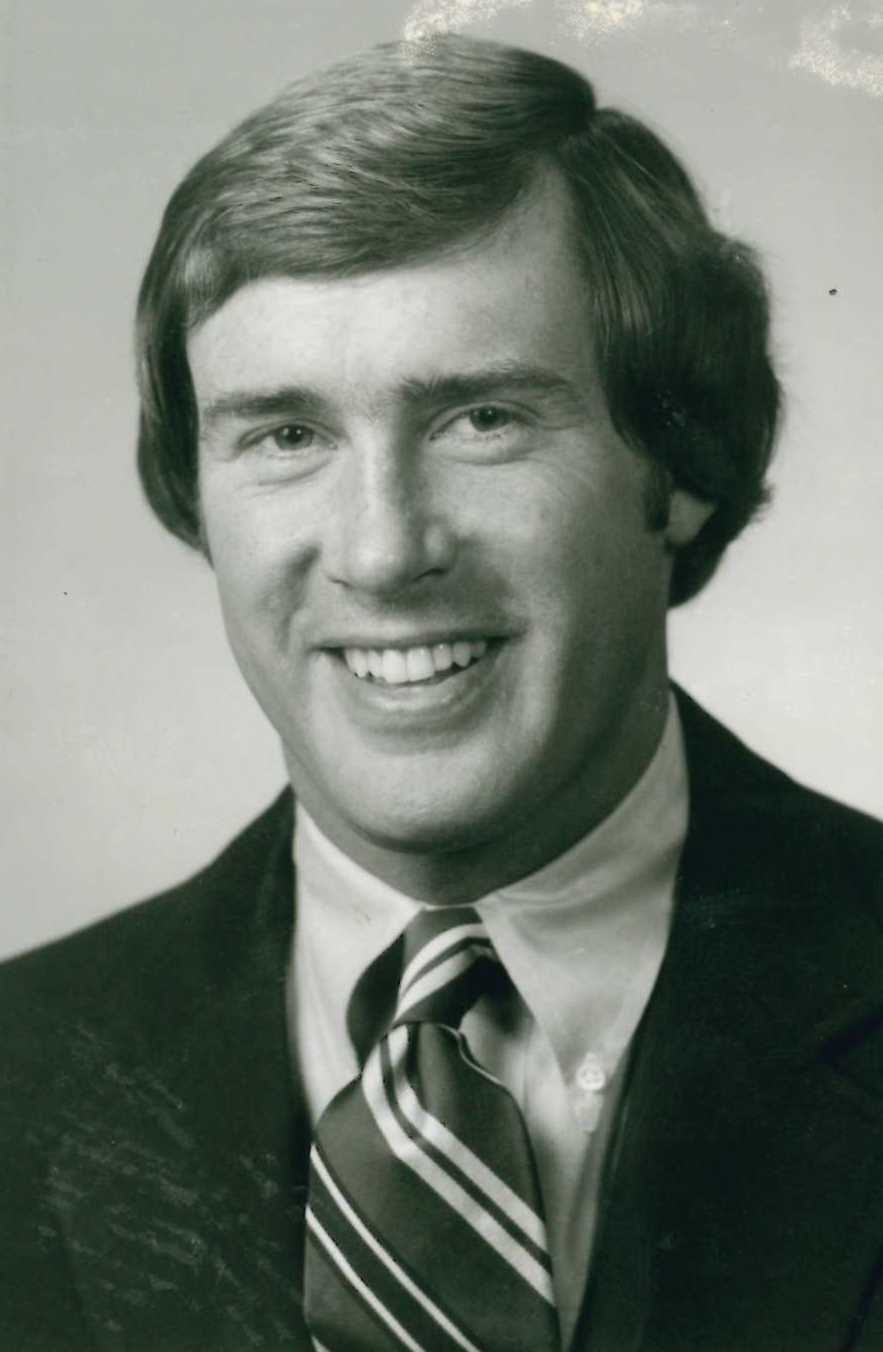