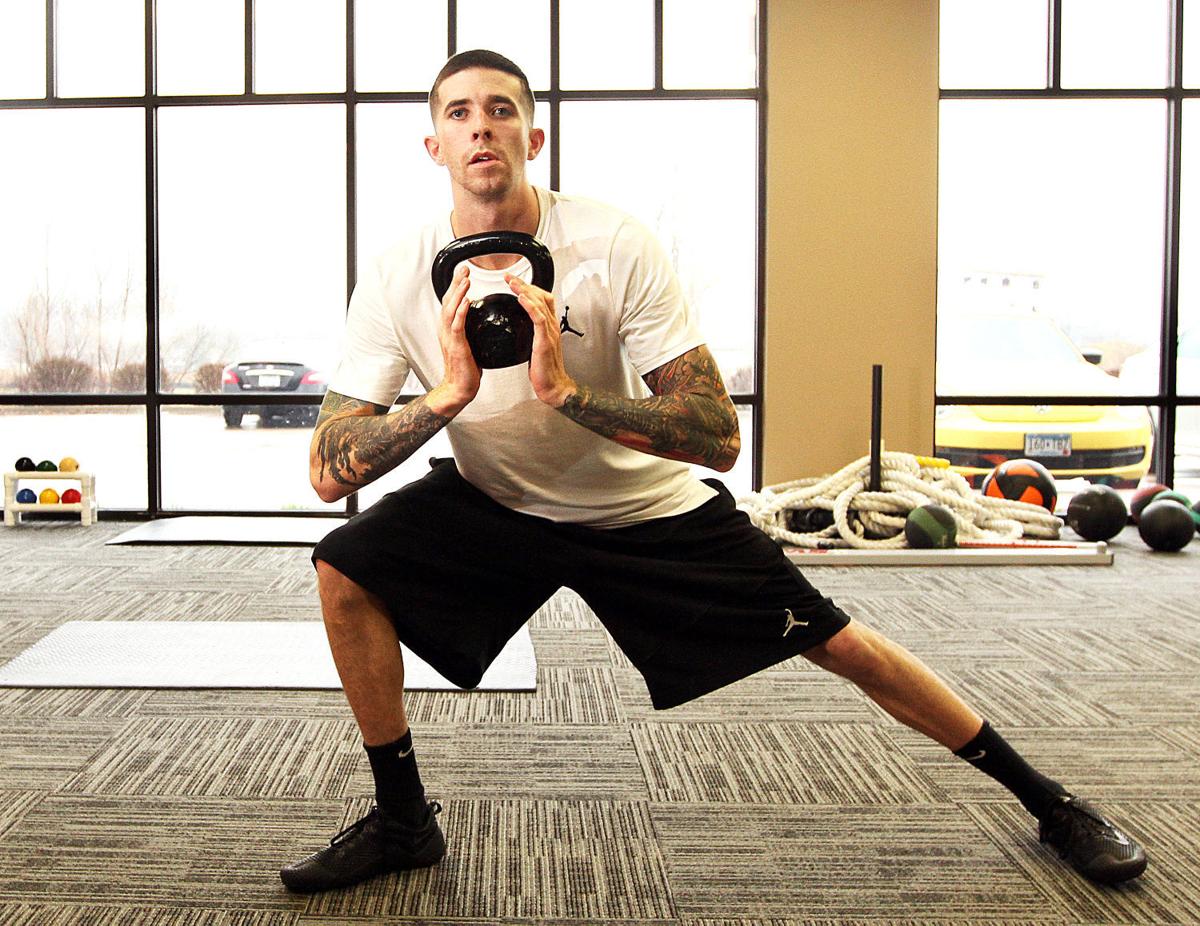 Former Iowa basketball player Jake Kelly works out at Tri-Med Clinic in Bettendorf on Wednesday. Kelly hopes to resume his pro career after four-plus years away from the game due to back chronic back problems. 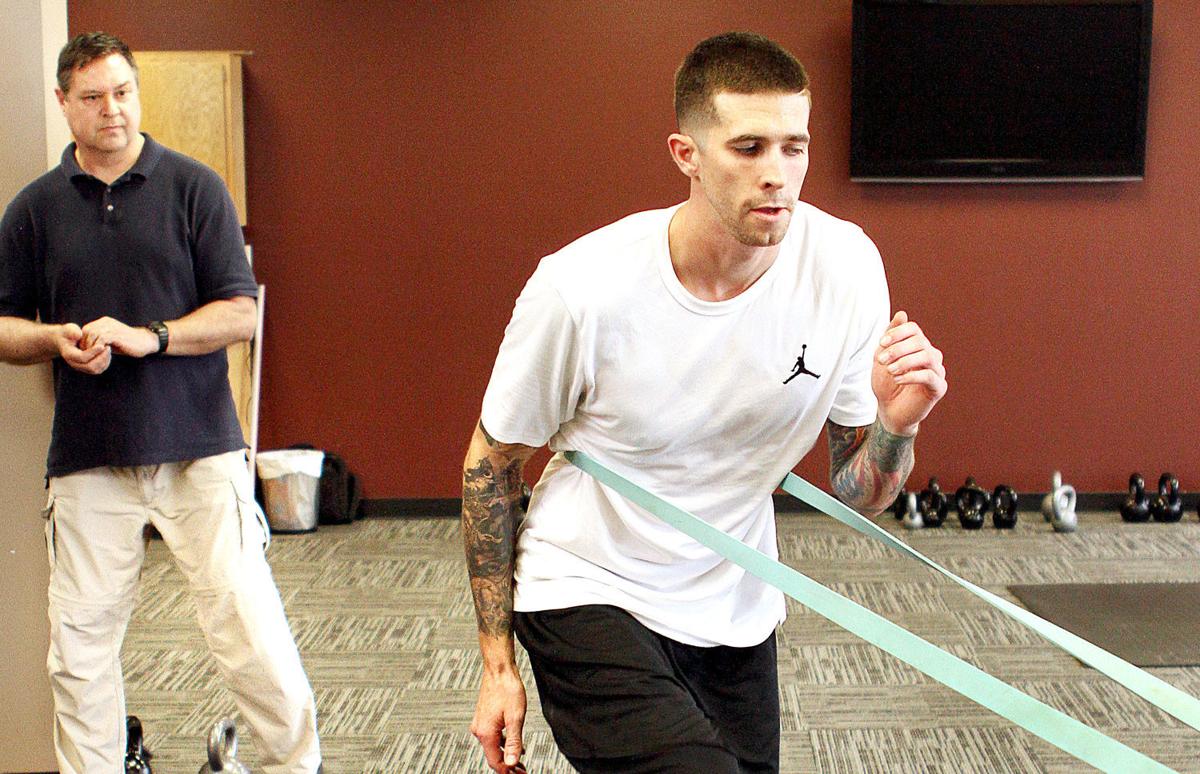 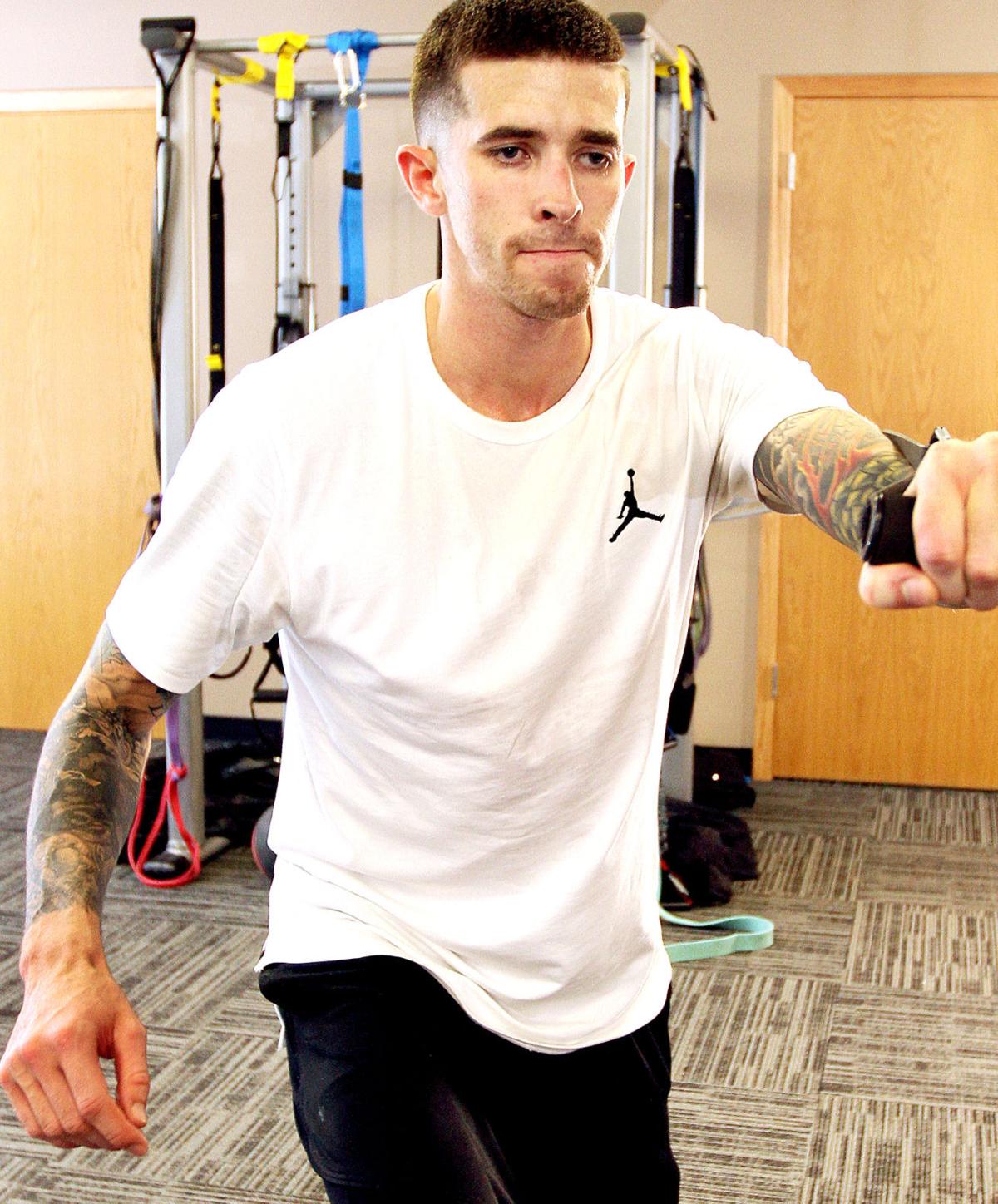 Jake Kelly is back in Iowa, working to put his basketball career together again.

An honorable mention all-Big Ten selection for Iowa who completed his college career leading Indiana State to its most recent NCAA tourney appearance in 2011, Kelly has spent the past two weeks in the Quad-Cities working toward a healthy return to the game.

“I look forward to being able to run up and down the court and play again,’’ Kelly said. “What I’ve been doing here is going to give me that chance.’’

Chronic back problems have essentially kept Kelly off the court for the past four-and-a-half years, since the time when initial problems sidelined him while he was playing for the Texas Legends in the NBA Developmental League.

He tried a multitude of treatments. He spent time with doctors, specialists, massage therapists, anything that might provide him some relief.

“Nothing worked,’’ Kelly said. “I tried what seemed like everything and it was as frustrating as it could be. Nothing I tried was moving me closer to getting back onto the court.’’

A couple of months ago, a friend told Kelly about a seminar that included a presentation by Dr. Mitchell Mally, a doctor of chiropractic who operates the Tri-Med Health and Wellness clinic in Bettendorf.

Kelly recalls the discussion with his friend centered on how previous ankle sprains he suffered could have impacted ligaments which could be at the root of his ongoing back issues.

“I was skeptical,’’ Kelly said. “But the adjustments and therapy I’ve had here over the past couple of weeks have totally changed things. The pain is gone for the first time in years.’’

Kelly has went through multiple adjustments and therapy sessions daily during his stay in the Quad-Cities. He will return to his current home in California this weekend with a game plan for continued progress he hopes will lead to tryouts that will allow him to resume his career.

“I want to get back to 100 percent and be able to play again pain-free. That’s where I’m heading with this and I feel like there is real progress,’’ Kelly said.

“We deal with the biomechanics of the entire body,’’ Mally said. “Most times, the issues begin in the foundation and that foundation is often the feet where 25 percent of the body’s bones can be found.’’

As ligaments become twisted with sprains, he said the pain created by sprains can be felt in different bodies in different locations.

“For some people, it might be seen as plantar fasciitis. For others, it results in knee pain and for others like Jake, it creates back issues,’’ Mally said.

Kelly’s journey to this point and a return to Iowa has been filled with challenges.

He left Iowa in the spring of 2009, a little less than a year after his mother, Julia, died when a small plane she was riding in crashed into the Gulf of Mexico off of the Florida coast during a trip she had arranged for Jake and his brother, Luke, after his freshman year of college.

Kelly returned to lead the Hawkeyes in scoring at 11.6 points per game as a sophomore.

He averaged 20 points over his final seven games in an Iowa uniform, earning honorable mention all-Big Ten honors before opting to return to Indiana where he played high school basketball at Carmel in suburban Indianapolis.

He enrolled at Indiana State to be closer to family members, including his father Bob and his brother Luke.

“It wasn’t an easy decision to leave Iowa. I loved it there, I still have a lot of friends there, but it was a decision I had to make,’’ Kelly said. “I needed to be there for my family. We needed each other.’’

Twelve games into his junior season with the Sycamores, Kelly suffered a torn anterior cruciate ligament.

A year later, he dealt with a stress fracture, a mold allergy and mononucleosis but averaged 8.7 points and hit free throws in the final seconds to finish off a four-point win over Missouri State in the title game of the 2011 Missouri Valley Conference tourney and sent Indiana State into the NCAA tourney for the first time in a decade.

A 6-foot-6 guard who blended size and skill, Kelly was selected early in the second round of the 2011 NBDL Draft.

He played that season for the Legends before back problems first impacted his game, leading to pain which ran from his back to his feet. He struggled to run the court initially and eventually had to shut things down.

As he struggled with his own health, a year later in the fall of 2012 his brother Luke died of what Kelly said was a drug overdose.

“It hasn’t been easy. After my mom’s accident, I always had basketball to fall back on. I could go to the gym and get away,’’ Kelly said. “Basketball was what I did since I was a little kid. It’s who I am. When my brother died, I couldn’t do that because of my back.’’

Kelly has started fresh. He relocated to San Diego, where he settled down with his girlfriend and his dog and works as a personal trainer and teaches basketball skills to young players.

“I want to be back out there running up and down the court, being part of a team,’’ Kelly said. “It’s been four-and-a-half years, I want to do all those things I know I can do and have the career I know I can have. I finally feel things are headed in the right direction.’’

Former Iowa basketball player Jake Kelly works out at Tri-Med Clinic in Bettendorf on Wednesday. Kelly hopes to resume his pro career after four-plus years away from the game due to back chronic back problems.