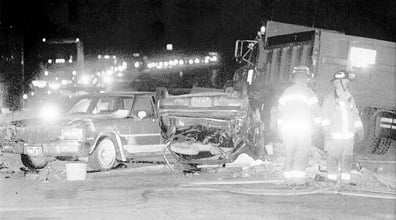 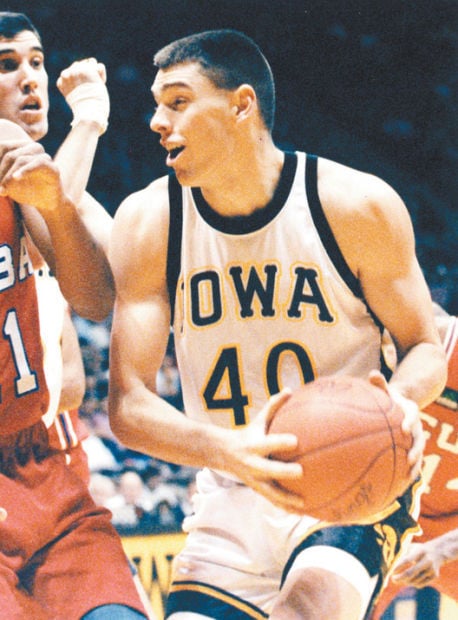 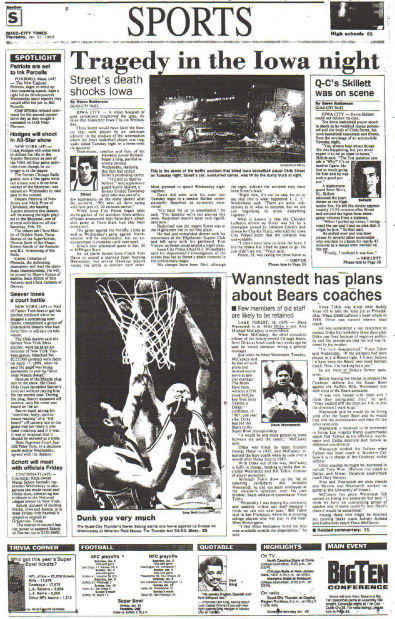 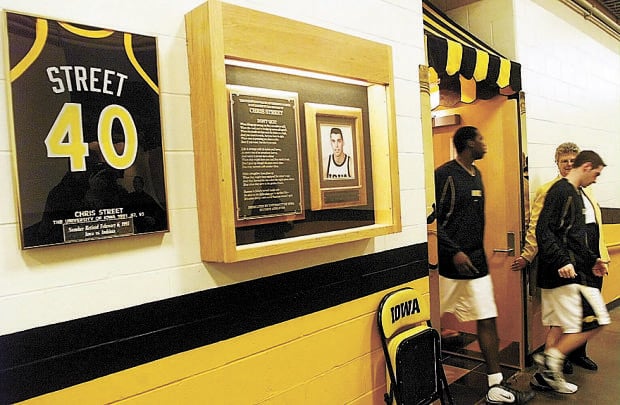 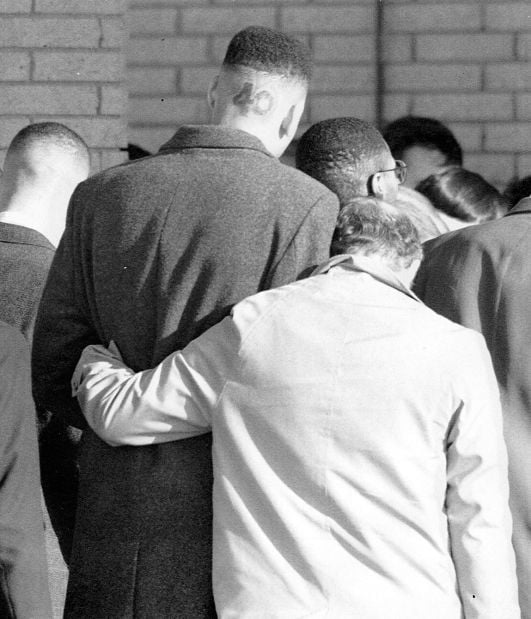 Iowa basketball player Acie Earl, above, remembers teammate Chris Street by having his number shaved into his head. Earl is being hugged by team trainer John Streif at Street's funeral Jan. 22, 1993. 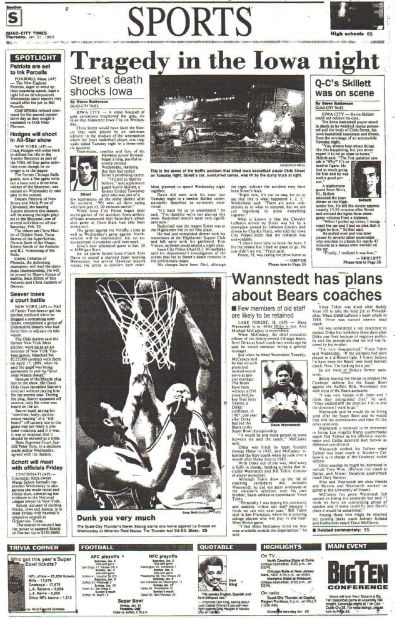 One of us heard the news from about 700 miles away.

The Iowa basketball team was a few days away from playing a game at Penn State for the first time since the Nittany Lions’ acceptance into the Big Ten and I had been dispatched to State College, Pa., days in advance to write about Penn State and the mood of the campus.

I arrived Tuesday and was to stay until the actual game Saturday.

There didn’t end up being a game … not that week anyway.

On Tuesday night — Jan. 19, 1993 — the phone rang and my cohorts back in the Quad-Cities informed me that Iowa player Chris Street had been killed in a collision with a snow plow. A Wednesday game against Northwestern was postponed, as was that historic matchup with Penn State that I had been sent to cover.

Losing a player in such a way in the middle of a season was tragic enough. Hearing about it in such a bizarre way was strange enough.

But this wasn’t just any player.

Street, a 6-foot-8 junior from Indianola, was one of those special players who could lift the performance of an entire team without scoring a point.

His enthusiasm and hustle were infectious. The mere sight of him at the front of Iowa’s fullcourt press waving his arms wildly to deter the inbounds pass got the fans going. When teammates saw him diving on the floor for loose balls or grappling with larger, more physically gifted players for rebounds, it somehow made them work that much harder.

Street had worked hard to make himself into more than just a scrapper. He finished third in the Big Ten in rebounding as a sophomore, and as a junior, he had averaged 14.5 points and 9.5 rebounds in the first 15 games. A so-so free-throw shooter when he entered college, he made the last 34 foul shots of his life, setting an Iowa record.

But some of the most enduring memories of him were from less glorious moments.

Iowa had its 1991 and 1992 seasons ended by losses to Duke in the NCAA Tournament. Street had been no match for Duke All-American Christian Laettner, but he battled Laettner to the very end in both contests, making him work for everything he got.

Ironically, the last game he played also was against Duke, in a regular-season contest. He scored 14 points, grabbed eight rebounds and at one point went jaw-to-jaw with All-American point guard Bobby Hurley, refusing to be intimidated by the Blue Devils or the Cameron Indoor Stadium crowd.

Indiana coach Bob Knight, whose career was based on intensity and extra effort, adored Street. Iowa State coach Johnny Orr said Street was “the kind of person you wanted to have on your team and didn’t like to play against because he never quit.”

When Street died, it only solidified his legacy.

When Iowa finally got around to playing games again, it rallied from a 15-point deficit in the last 31/2 minutes to defeat Michigan State on the road. The players said they felt as though Street was there with them, urging them on.

When Iowa played a highly regarded Michigan team in its first home game since Street’s death, it was one of the most dynamic and electric episodes in the 30-year history of Carver-Hawkeye Arena.

The Hawkeyes were undermanned against a team destined to finish second in the nation that season, but they played like a bunch of Chris Streets and sent the Wolverines home with an 88-80 loss. The crowd, spurred on by the memory of its favorite player, gushed onto the court afterward. As one of us noted in a column that day, if they could have found a set of goal posts after the game, the fans would have torn them down in celebration.

There is still a memorial to him outside the Hawkeyes’ locker room. The team gives an award each year in his honor to the player who displays the most hustle and determination.

Iowa kids who weren’t even born in 1993 know his name and understand what he stood for.

“His legacy is still felt there, as it should be,” former Iowa star Matt Gatens told the Daily Iowan last month. “And hopefully, it will forever.”

From the archives: Tragedy in the Iowa night

From the archives: Yes, Chris Street really was special

IOWA CITY - Chris Street typified everything the Iowa basketball program is all about.

From the archives: Expectations did not limit Chris Street

When Chris Street first signed to play basketball for the University of Iowa, most of us just assumed he'd be like all of the other Iowabred k…

IOWA CITY - Kevin Skillett could not believe his eyes.

From the archives: Crash kills Hawk

IOWA CITY - Chris Street, a starting forward whose intensity and grit was the heart and soul of the Iowa basketball team, was killed in a thre…

From the archives: Condolences pour into university

IOWA CITY - The impact of Chris Street's death stretched far beyond the confines of Carver Hawkeye Arena and the state of Iowa.

From the archives: Iowa deals with death

One January 19, 1993, the car Iowa basketball player Chris Street was driving was struck by a snow plow as Street was exiting the Highlander I…

Iowa basketball player Acie Earl, above, remembers teammate Chris Street by having his number shaved into his head. Earl is being hugged by team trainer John Streif at Street's funeral Jan. 22, 1993.