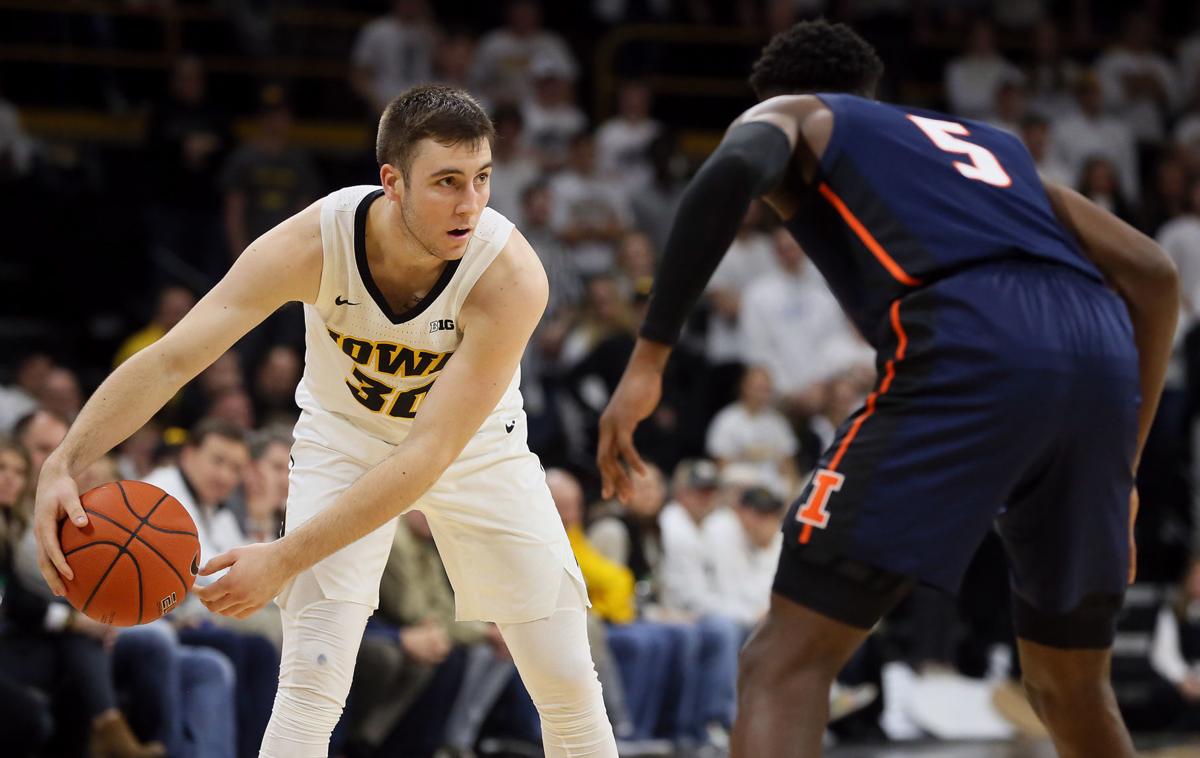 Iowa's Connor McCaffery looks to get the ball inside past Illinois' Tevian Jones during a game last season. Tonight's game against Southern-Illinois Edwardsville is the first time Connor will share the court at Iowa with his brother Patrick McCaffery. 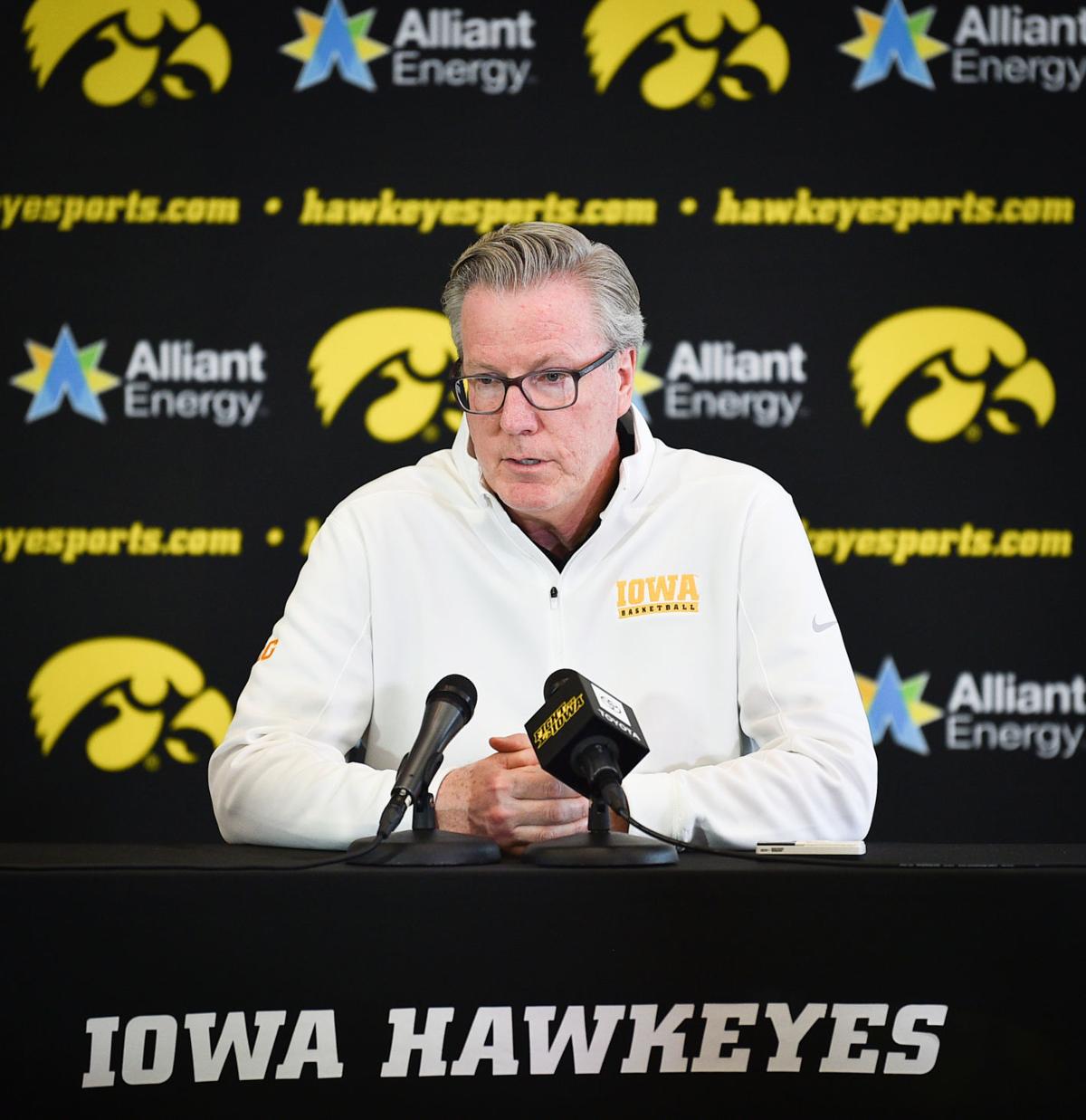 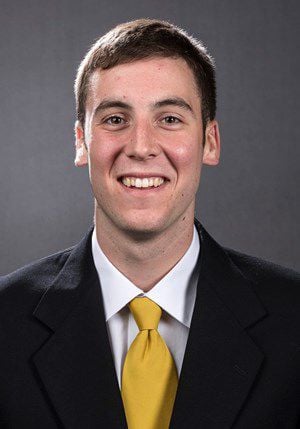 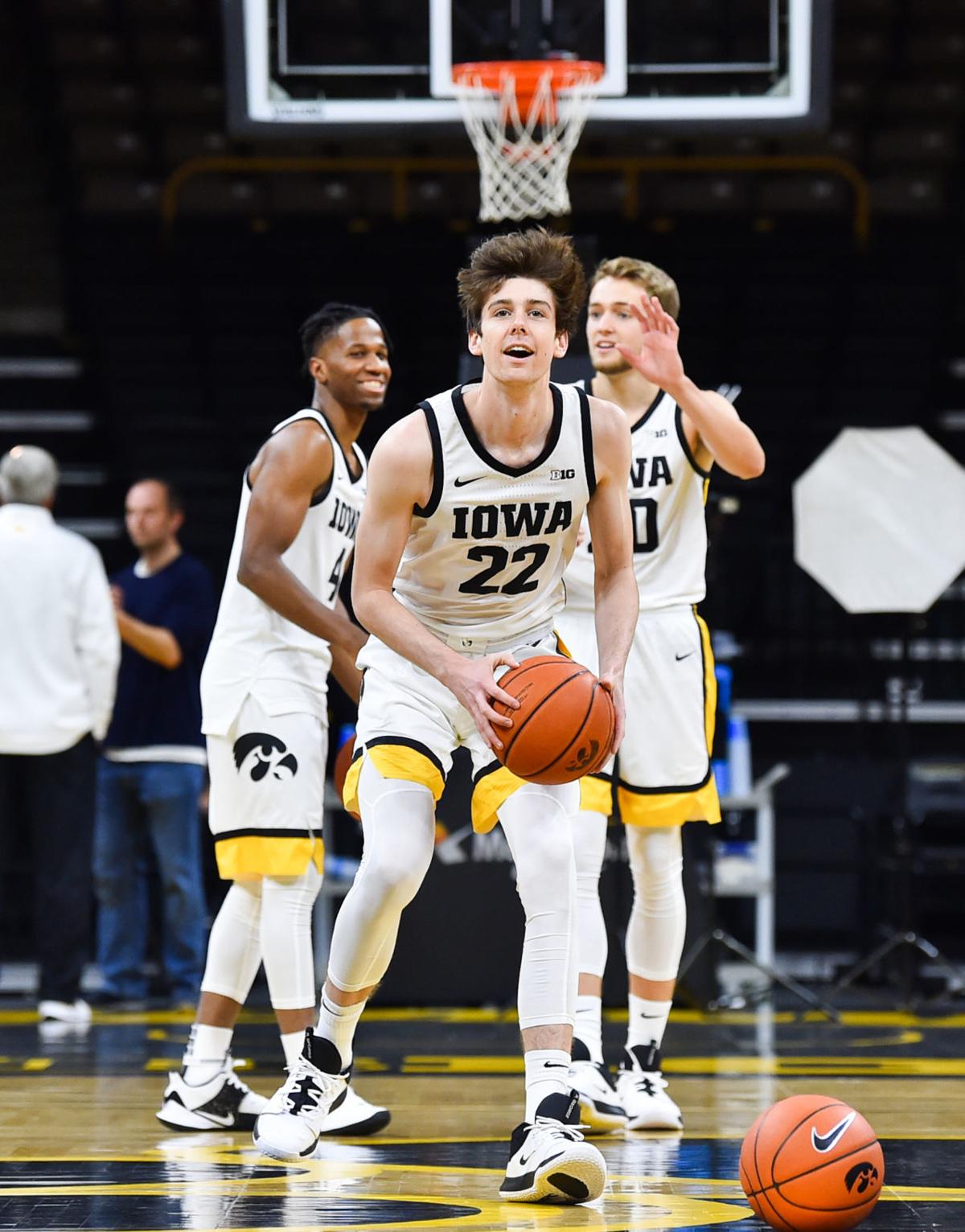 Patrick McCaffery (22) attempts to make a halfcourt shot as Iowa players have a contest among themselves at the end of last week's media day in Iowa City. 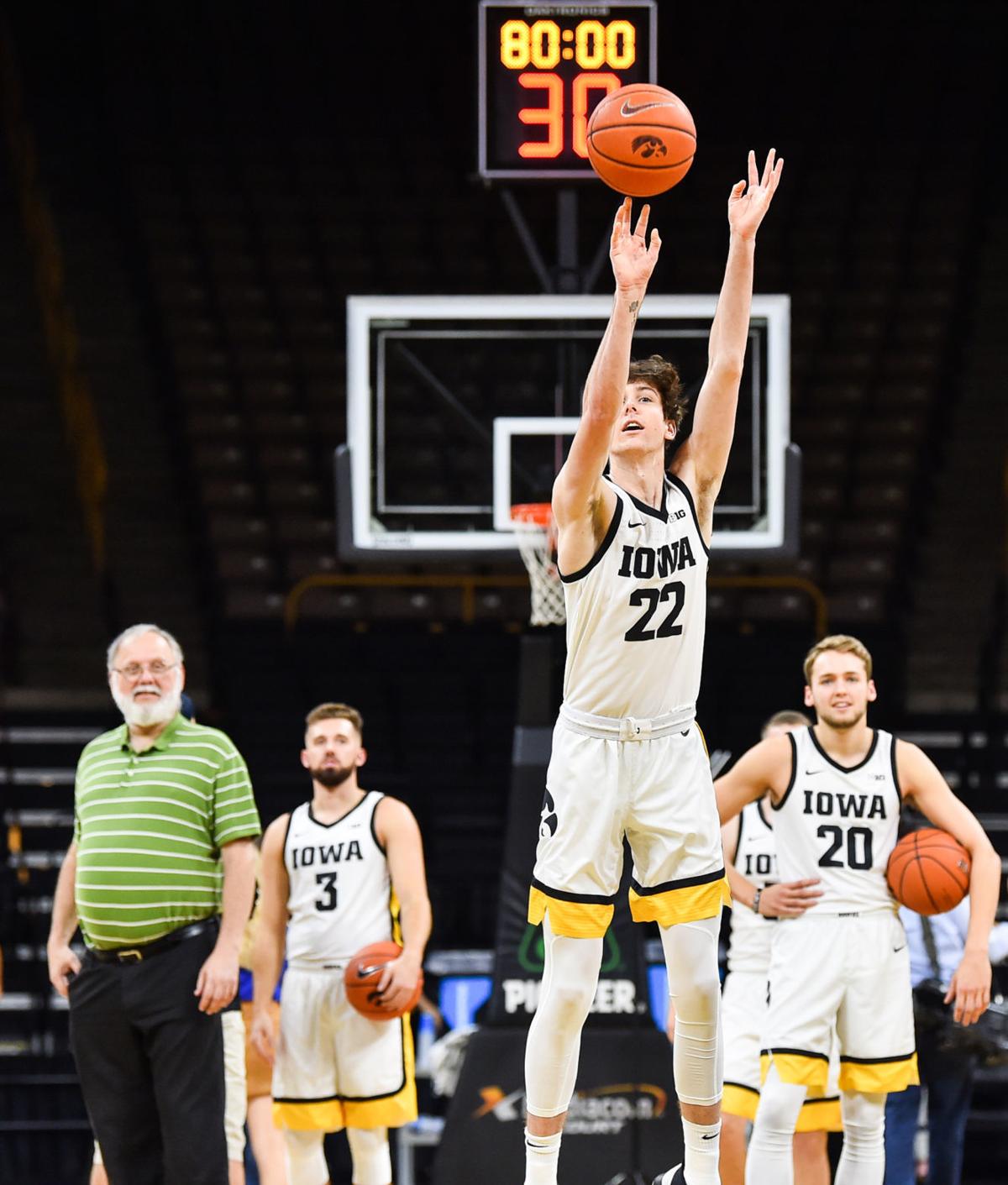 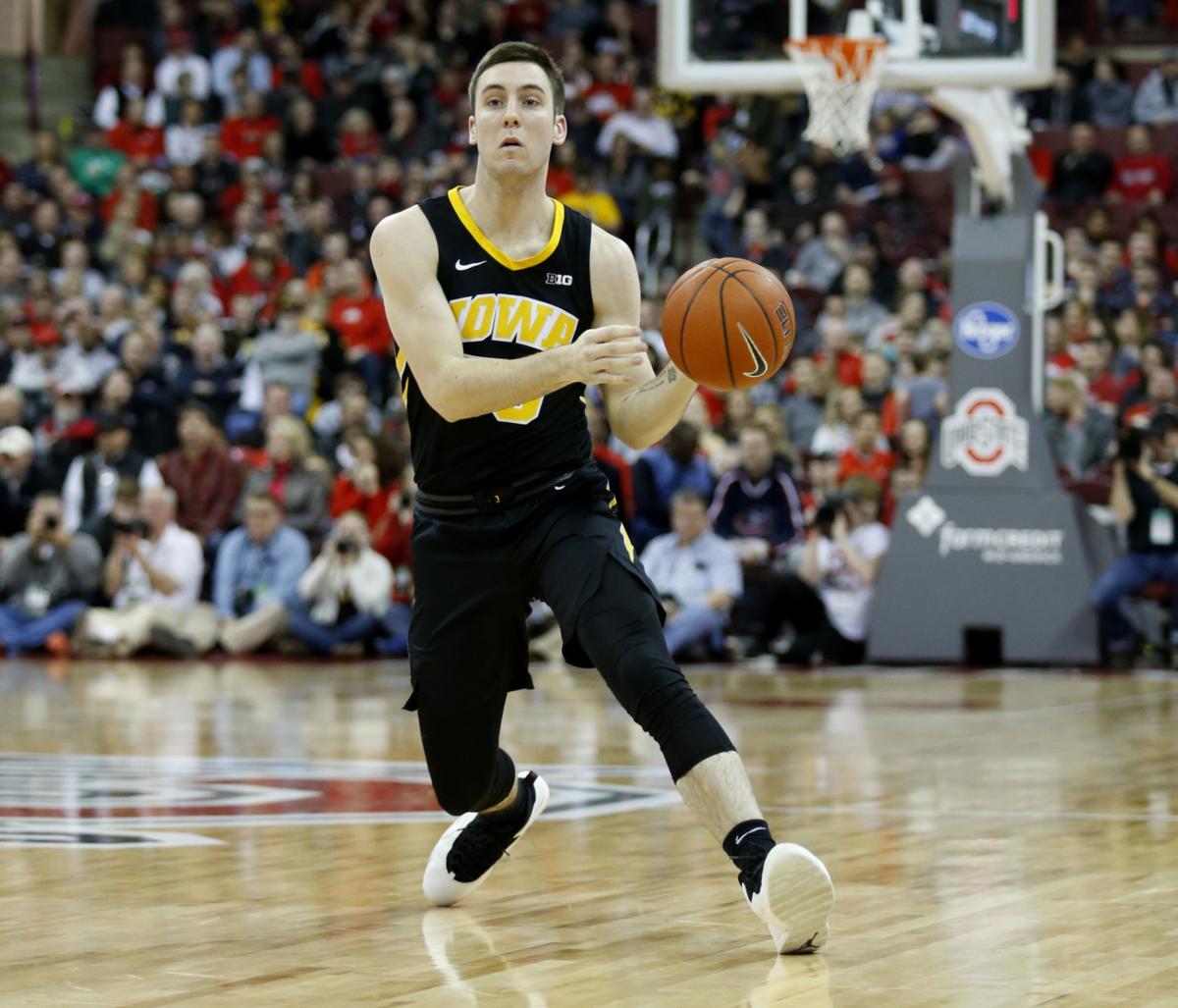 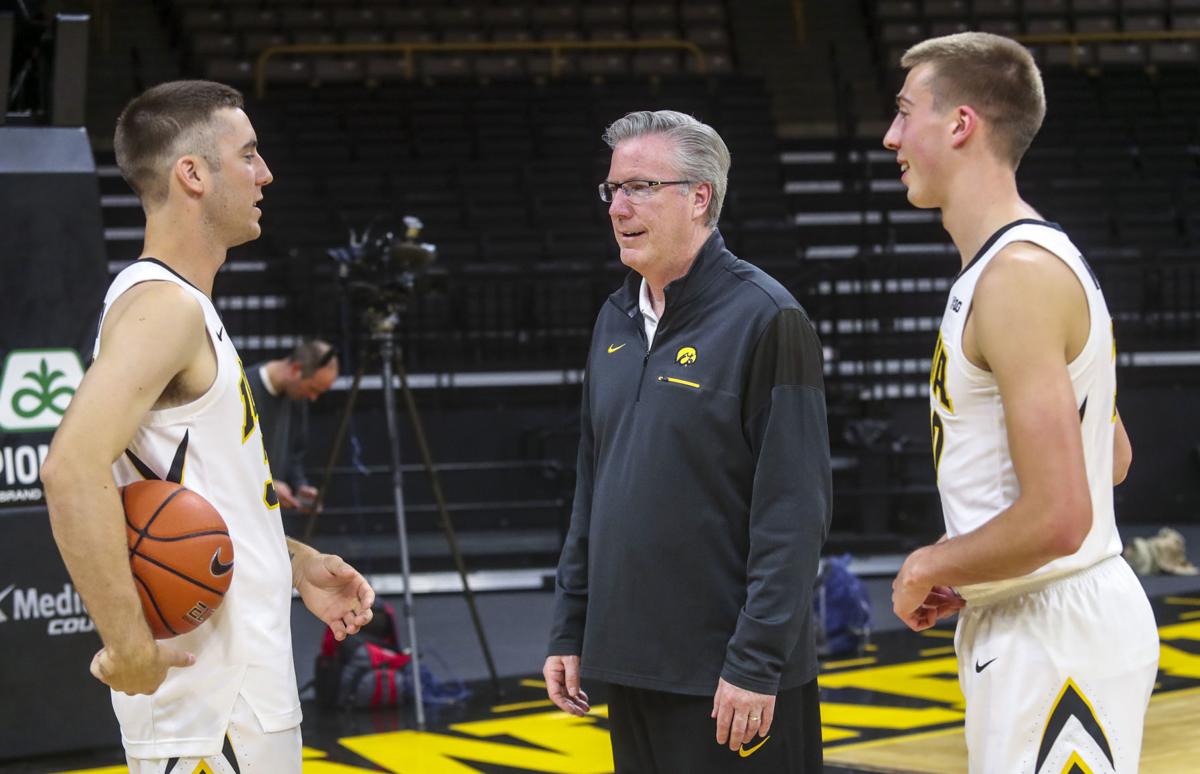 IOWA CITY — Iowa coach Fran McCaffery still remembers what it was like about 15 years ago when he would bring his two oldest sons with him to basketball practice.

One of them watched everything that happened on the court, then went and watched video with the players and coaches, soaking up every bit of information he could.

The other son, about two years younger, generally was running around in some sort of costume, playing with Power Rangers figures, oblivious to anything that was happening on the court.

The two kids still come to practice with McCaffery every day. But now they’re on the team, and they will play together in a regular-season game for the first time tonight when Iowa hosts Southern Illinois-Edwardsville in an 8 p.m. game at Carver-Hawkeye Arena.

Connor McCaffery, now in his third year in the Iowa program, said it has been "surreal" to be on the same team as his brother, Patrick, and to be coached by his father.

"It’s been great so far, and it’s really special to be able to do it because not a lot of brothers are able to play on the same team at this level, especially for their dad," added Patrick McCaffery, a freshman who will be making his college debut tonight. "It’s really a unique situation. I’m blessed to be able to be part of it."

The McCaffery boys are one of 15 sets of brothers who will play together in NCAA Division I basketball this season. Iowa is one of 13 teams on which a father will be coaching a son.

There is only one program in which the head coach will coach two sons.

The Hawkeyes are it.

"It's a beautiful thing to come to practice every day and see them both, to have them out there in the Hawkeye uniform and remember when we first got here they would sit across the way or come to practice and sit with the managers and shoot on the side," Fran McCaffery said.

"It's been like that for a long time. To see them both out there, and then when they're both out there together sharing the ball and making plays together, it's terrific."

Although they are brothers and get along extremely well, the McCaffery boys couldn’t possibly be more different as players or as people.

Connor, who will make his first career start at point guard tonight, is the consummate coach’s son.

He is in complete control of the offense, as evidenced by what he did Monday in a 96-58 exhibition victory over Lindsey Wilson College. He handed out 11 assists in only 23 minutes of action and attempted just one shot, a 3-pointer that swished through the hoop.

Teammates rave about his ability to find them on the court and get them the ball in a position to score.

"He just knows how to read the game," redshirt freshman CJ Fredrick said. "He’s so smooth. He plays at his own pace. I love playing with him. He gives it to you right in the shooting pocket so I can just go right up with it. He’s just so fun to play with."

Fran McCaffery isn’t surprised. After all, Connor really was watching film with the coaches as far back as kindergarten.

"But the most important thing with him, he has a winning mindset, so he recognizes that we have some talented offensive players on this team that need the ball, and not only that, where do they need to get it …," Fran said. "He understands that. He takes pride in it."

Connor battled injuries and illnesses as a freshman at Iowa in 2017-18 and ended up taking a redshirt year. Last season, he played 34 games as Jordan Bohannon’s understudy. With Bohannon gradually working his way back from hip surgery, Connor is now the starting point guard.

He concedes that he didn’t exactly have a normal childhood. Even before the family moved to Iowa from Albany, New York, where Fran was the head coach at Siena, he had people picking him up from school and whisking him over to his dad’s practices so he could soak up more knowledge.

"It was always just what I was interested in," Connor said. "Every kid goes through a stage where they play with Legos or wear costumes. Patrick wore costumes. He was always dressed up. Robin. Batman. He was wearing costumes until he was 10 years old. I was just playing basketball and baseball."

Connor still is doing two sports. He will join the Iowa baseball season as soon as the basketball season is over and even at this time of year mixes in hitting sessions in the mornings.

He played in a wood-bat league in Albany over the summer, but after being hit on the wrist by a pitch early in the season, he came back to Iowa so he could get back on the basketball court.

"I think it helped me a lot because I got back here and I started working in here with these guys," Connor said. "That started developing some team chemistry."

Obviously, he already had some chemistry with a certain 6-foot-9 freshman forward who is just entering the Iowa program.

Patrick is about four inches taller and 25 pounds lighter than Connor while being more athletic and much less cerebral.

"We’re different on and off the court," Patrick said. "He’s more of the point guard, leader type and I’m kind of like … he throws me the ball and I score the ball. That’s kind of how it works.

"But then off the court we’re very different personalities. He’s very serious and very smart. You can see I’m just kind of goofy and say whatever pops into my head. It’s very different but it works very well together."

Patrick admits that back when they were little kids, he had very little interest in what was happening at Dad’s practices.

He eventually transitioned from Power Rangers to power forward although he figures to play much more as a small forward with the Hawkeyes, providing speed and instant offense off the bench.

The brothers say they never really had much of a discussion about playing together for their dad at the college level.

"I think it was always something that was expected without saying anything," Connor said. "He knew early obviously that I was coming here, and I think I always kind of assumed he was coming here."

The brothers already provided one memorable moment for the family Monday against Lindsey Wilson.

Late in the game, Patrick got the ball and shoveled it to his older brother, then took off running up the floor as Connor rapidly dribbled to the other end.

"I kind of looked ahead and saw that there was nobody really in front of me so I just took off and I knew he was going to get it to me …," said Patrick, who scored 12 points in the exhibition. "I knew when I got a little bit ahead of him that he saw what I saw."

"In the moment I didn’t think about who I was passing it to in that situation," Connor added. "I just saw somebody open and threw it. But then after the fact I looked and saw it was him and he went and dunked it. That was pretty cool for me to see."

It probably is the first of many such moments.

"I’ve had a pretty unique connection with Connor. We played together in high school," Patrick said. "But this is the first time I’ve ever played for my dad. It’s definitely unique.

"It’s a different relationship than I’ve had with other coaches. I’ve learned a lot. I’ve grown a lot since I’ve been here. It’s really cool, and it’s something I’m looking forward to for the next few years."

1. What can we expect from Jordan Bohannon this season?

A homecoming for Toren Young, a challenge for Iowa linebackers and the game before the game are all part of today’s Hawkeye 10@10, just in tim…

Iowa vs. SIU-Edwardsville at a glance

Iowa's Connor McCaffery looks to get the ball inside past Illinois' Tevian Jones during a game last season. Tonight's game against Southern-Illinois Edwardsville is the first time Connor will share the court at Iowa with his brother Patrick McCaffery.

Patrick McCaffery (22) attempts to make a halfcourt shot as Iowa players have a contest among themselves at the end of last week's media day in Iowa City. 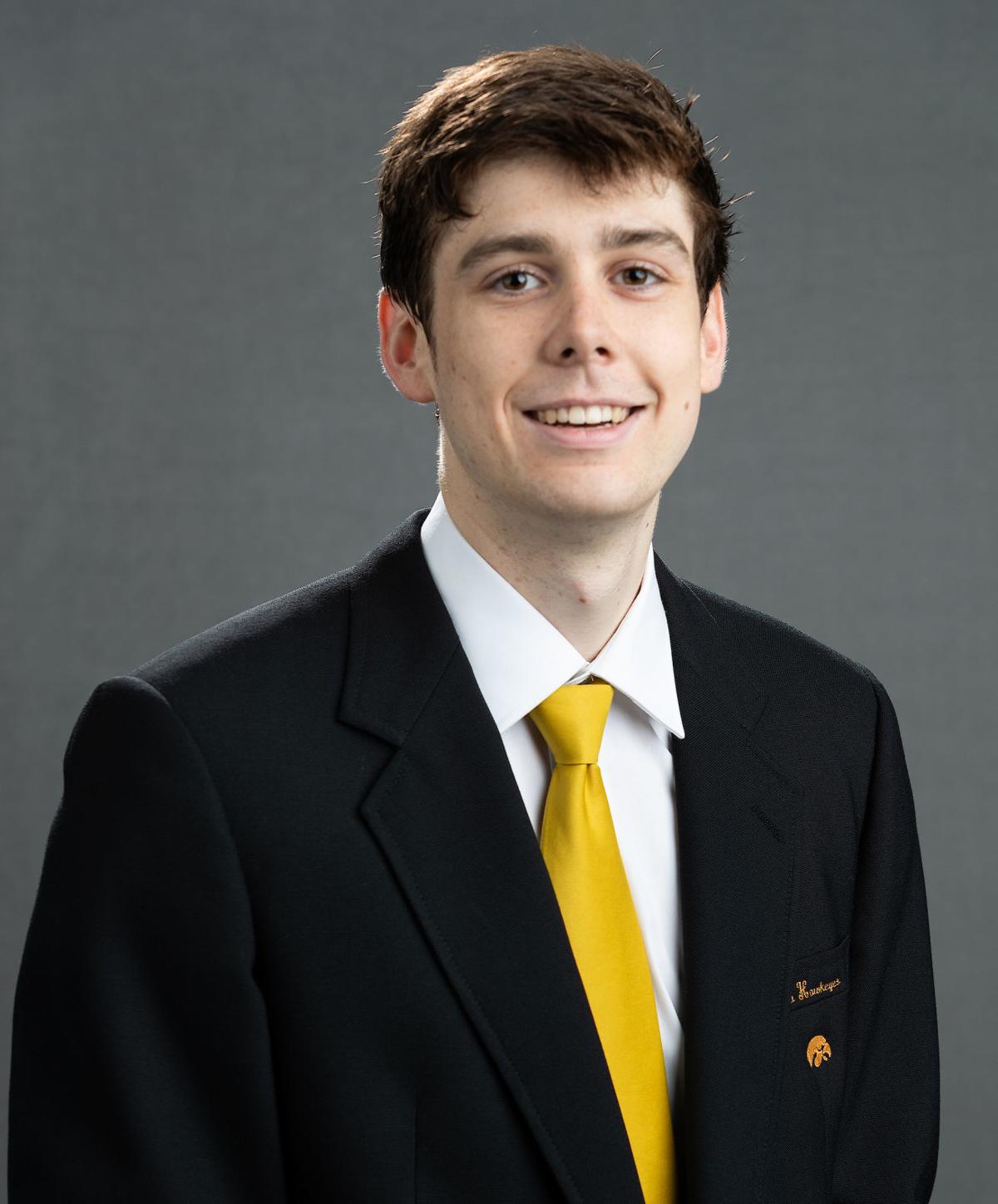