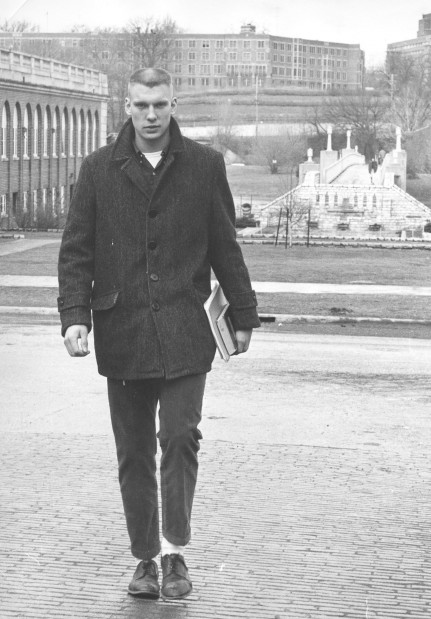 Don Nelson, formerly of Rock Island, left the University of Iowa in 1962 to pursue a career in the NBA. Fifty years later, he will go through commencement exercises at Iowa. (Photo courtesy Iowa Athletic Communications) 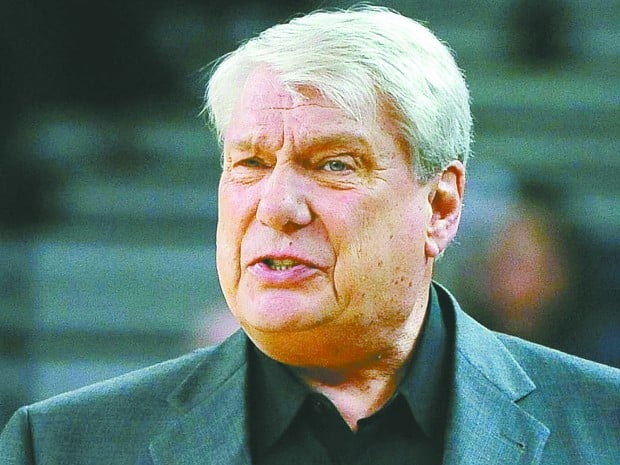 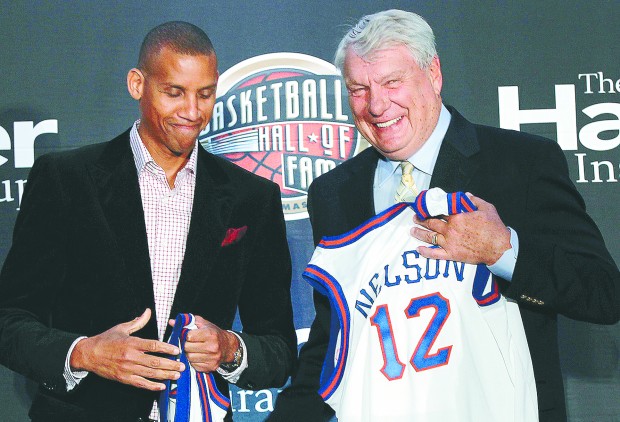 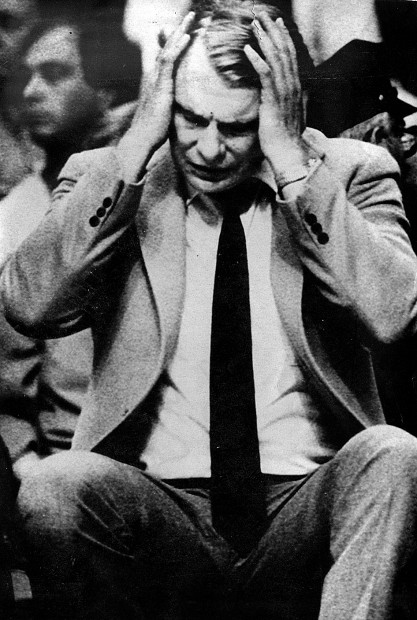 Nelson shows his frustration as coach of the Milwaukee Bucks during a playoff game in 1984. (AP file photo) 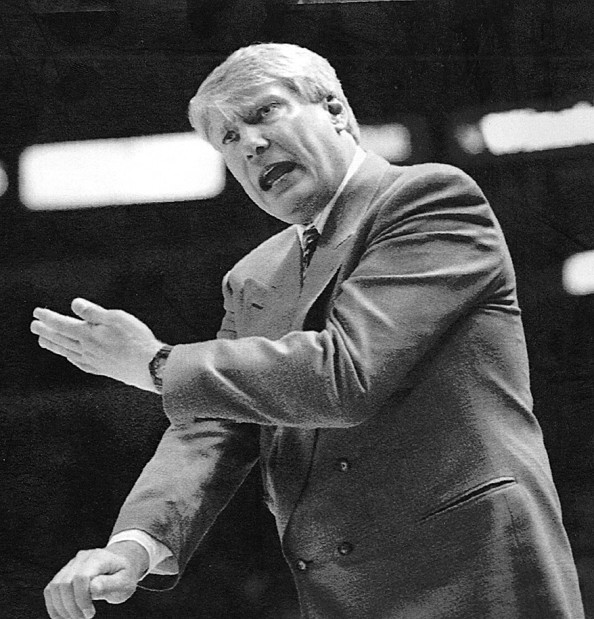 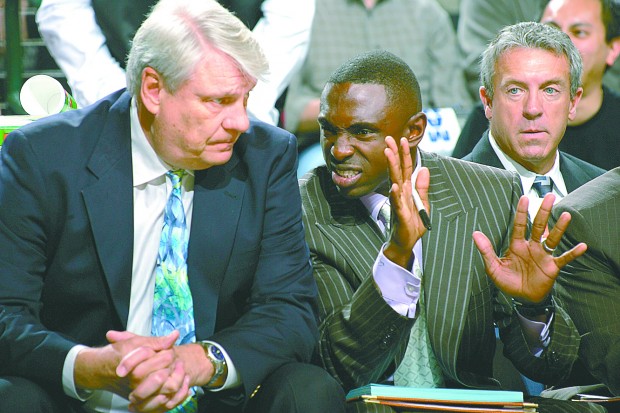 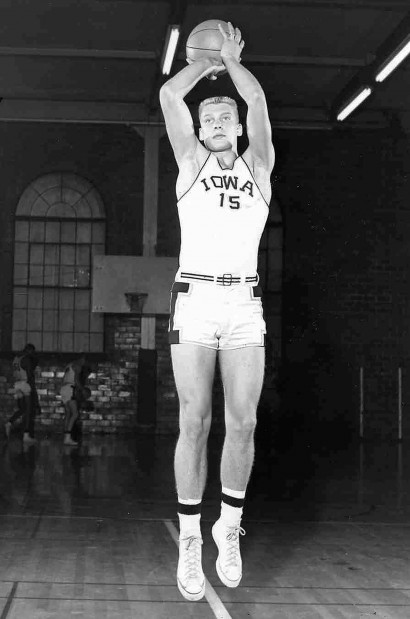 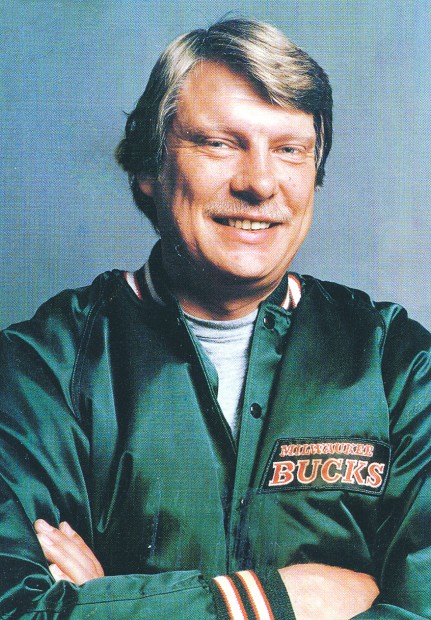 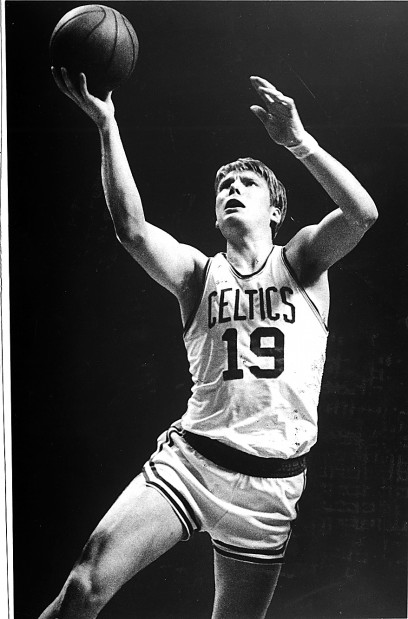 Don Nelson averaged a career-high 15.4 points a game with the Boston Celtics in 1970. (AP file photo) 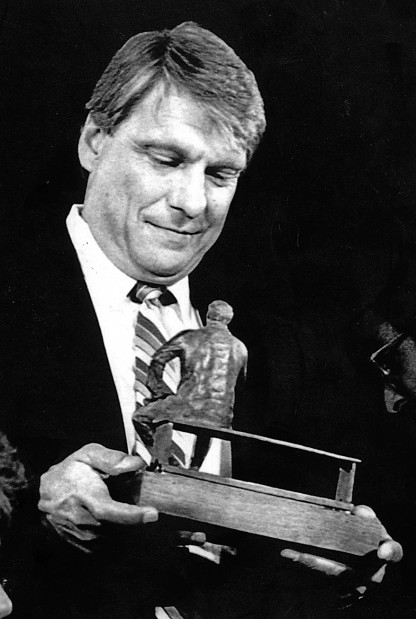 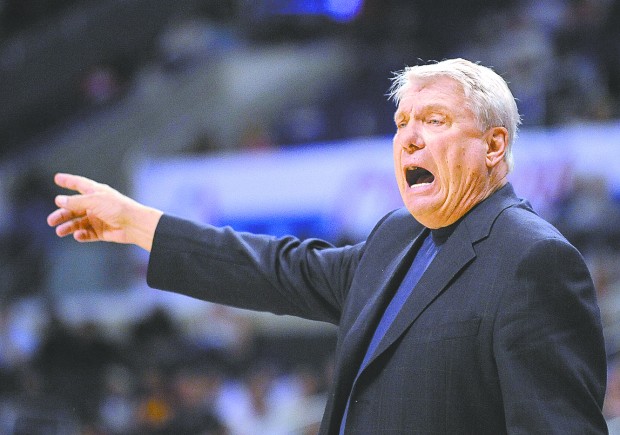 Golden State Warriors coach Don Nelson yells to his team during the second half of their NBA basketball game against the Los Angeles Clippers, Sunday, March 28, 2010, in Los Angeles. The Warriors won 121-103. (AP Photo/Mark J. Terrill) 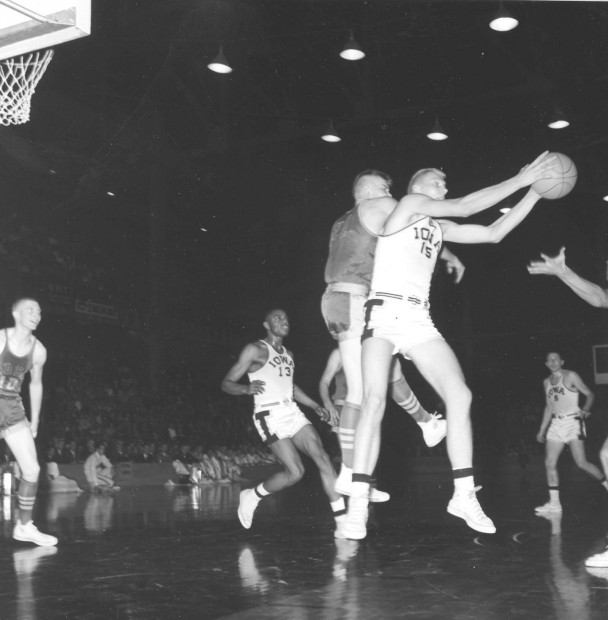 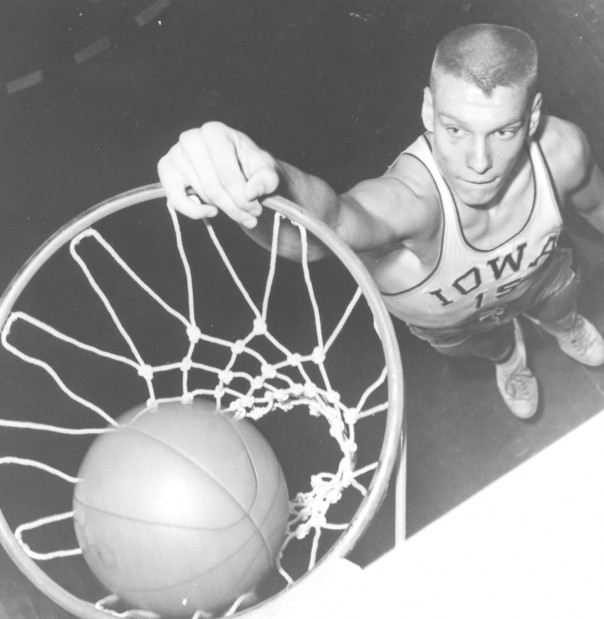 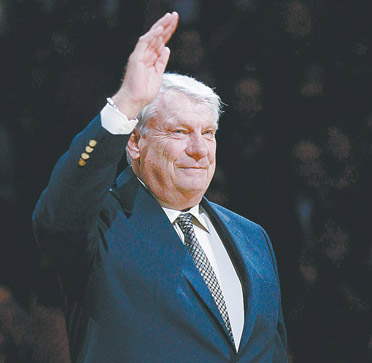 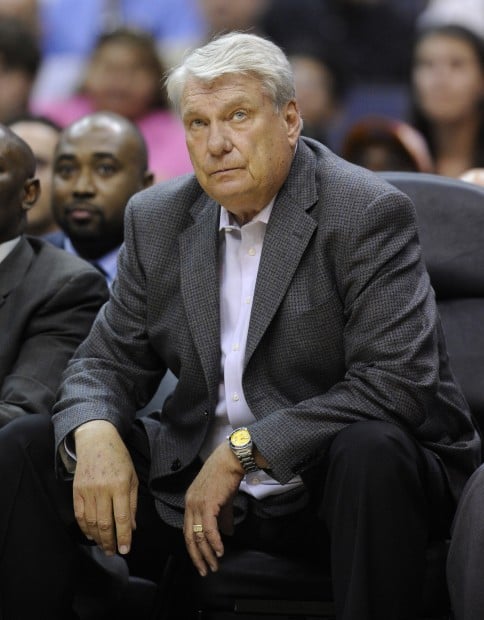 Golden State Warriors coach Don Nelson watches from the bench during the second half of an NBA basketball game against the Washington Wizards, Tuesday, April 6, 2010, in Washington. The Wizards won 112-94. (AP Photo/Nick Wass)
Don Doxsie

It’s not as if Don Nelson never did anything to make his mother proud.

Arguably the most famous sports figure ever to come out of the Quad-Cities, Nelson was an All-American basketball player at Iowa, won five world championships as a player with the legendary Boston Celtics teams of the 1960s and ’70s and registered a record 1,335 victories in coaching stints with the Milwaukee Bucks, Golden State Warriors (twice), New York Knicks and Dallas Mavericks. He also is scheduled to be inducted into the Naismith Basketball Hall of Fame in September.

But there was always this one other thing he didn’t do.

Next weekend, he will do it. Nelson, who turns 72 four days after the ceremonies, will go through commencement exercises at the University of Iowa. A half-century after attending his last class there, Nelson will walk across a stage in Iowa City and do something he came close to doing in 1962.

But dozens of loved ones who didn’t even exist in 1962 will be on hand to share in Nelson’s joy.

“He is so thrilled, he’s beside himself,” said Polk County District Judge Joel Novak, a lifelong friend who was Nelson’s teammate at Rock Island High School and Iowa.

You can tell by the tone of Nelson’s voice that he regards this as one of the achievements of a lifetime loaded with them. Upon hearing the news that he had completed the requirements for his degree, he knew exactly what he wanted to do.

He has reserved 10 rooms in an Iowa City hotel and rented an 18-passenger executive bus that has sleeping quarters for eight. He plans to begin in Chicago this week, pick up various relatives along the way — including Ann Hess — and arrive in Iowa City for a weekend of overdue exultation.

The tale of what it took for Nelson to finish his degree is nearly as long and meandering as his voyage in basketball.

When he completed his college playing career at Iowa in 1962, he was just a few hours short of a teaching degree. He and Novak actually had an opportunity to stay around and coach the Hawkeyes freshman team for head coach Sharm Scheuerman, a fellow Rock Islander, but Novak had his sights set on law school and Nelson chose to try pro ball.

Nelson needed just eight credit hours of a foreign language and a few hours of classroom teaching experience to get the degree. While playing for the Celtics in the ’60s, he took some Spanish classes at a Massachusetts junior college in an effort to finish things up.

“I thought I took eight hours when I was with the Celtics, but then it ended up only being six,” he said. “So, I thought, ‘Oh, shoot, forget it.’ ”

Many years later, while coaching the Golden State Warriors, he took another stab at it. He took a four-hour Spanish correspondence class through the University of California, and with tutoring help from a friend, he scratched out a C.

“So, I called the university (Iowa), and they said, ‘You still need this practice teaching class,’ ” Nelson said. “I said, ‘I’ve been teaching my whole life. I’m a coach.’ So, again I said, ‘Forget it,’ and just kept working.

“When I retired from coaching last year, I said the one thing I’d really like to do is get my degree.”

He began by calling Novak, who contacted Mark “Buck” Schantz, another old teammate who is part of the law faculty at Iowa. Schantz made a successful plea on Nelson’s behalf.

“They said they would forgive the teaching hours since I had been coaching all those years,” Nelson said.

He thought he still might need more Spanish classes until he remembered the course he had taken in California.

“I said, ‘Sonofagun, I may have enough,’ ” Nelson said. “I called the University of California and they said, ‘We have your records right here. You have four hours of Spanish with us.’ So, I got 10 hours of Spanish and forgot I even took it.”

Finally, after all that, Iowa agreed to confer a degree on one of its most famous alumni.

“So, on May 12, 2012, Donald Arvid Nelson is going to don a cap and gown and cross the stage with all the other 22-years-olds getting their degrees,” Novak said.

The achievement does more than just fulfill the wish of a mother.

It rights another wrong on the ledger of a man whose life has been strewn with roadblocks and who, by his own admission, has made a fistful of regrettable mistakes.

“I think he wanted to do this for himself, too,” Hess said.

While Nelson has all the money he’ll ever need and lives in an idyllic setting in Maui, it hasn’t been an easy life.

He moved with his family from Muskegon, Mich., to a farm near Sherrard, Ill., when he was very young. When Nelson was in elementary school, Arvid and Agnes Nelson lost the farm and moved their family to a house on 19th Street in Rock Island.

Arvid Nelson, who once aspired to a medical career, managed to scratch out a living doing manual labor at the Rock Island Arsenal. By all accounts, he did not think much of the basketball-playing ambitions of his son and offered little encouragement.

Don fathered two children of his own by first wife, Sharon, while still playing at Iowa, fathered two more during his years with the Celtics and fathered another daughter out of wedlock in Washington, D.C., in 1968.

He never knew about that until 28 years later when Lee McBride reluctantly penned a letter to the famous coach she had been informed was her biological dad.

“I opened that letter, and I about crapped myself,” Nelson said. “I said, ‘Jiminy, I’ve got another daughter.”

By then, Nelson had left Sharon, straining his

relationships with all of his legitimate children.

Somehow, he has come through it all relatively unscathed.

All the frayed relationships have been fixed. All the heartaches have been healed. Sharon and Joy are friends. McBride lives nearby in Maui and has a close relationship with her father.

All of it will culminate in Iowa City in what promises to be a weekend to remember. Not only will all of Nelson’s children be in attendance, but so will 13 grandchildren.

So will Ann Hess and one of her daughters. So will friends from all over the country, including Novak.

“I think it’s going to be a real fun thing,” Hess said. “There’s going be a lot of people there. I’m looking forward to it.”

Novak, who has nurtured and counseled his old friend through his personal travails, can’t help but marvel at Nelson’s latest achievement.

“He’s a multimillionaire, the winningest coach in the NBA, a college All-American, the super sixth man for the Celtics’ championship teams,” Novak said. “What else do you need? I guess what you need is your undergraduate degree.”

Nelson graduates from Iowa on Saturday

Photos: Don Nelson through the years

1958 – Nelson completes a record-setting career at Rock Island High School in which he led the Rocks to a 47-7 record in his last two years. I…

Don Nelson is nearly as busy in retirement as he was when he was coaching in the National Basketball Association for 31 years.

Don Nelson, formerly of Rock Island, left the University of Iowa in 1962 to pursue a career in the NBA. Fifty years later, he will go through commencement exercises at Iowa. (Photo courtesy Iowa Athletic Communications)

Nelson shows his frustration as coach of the Milwaukee Bucks during a playoff game in 1984. (AP file photo)

Don Nelson averaged a career-high 15.4 points a game with the Boston Celtics in 1970. (AP file photo)

Golden State Warriors coach Don Nelson yells to his team during the second half of their NBA basketball game against the Los Angeles Clippers, Sunday, March 28, 2010, in Los Angeles. The Warriors won 121-103. (AP Photo/Mark J. Terrill)