Nearly midway through the season, no team in the NBA is stingier behind the 3-point arc than the Chicago Bulls.

The Bulls take only 29.9 3-pointers per game — the lowest mark in the league and nearly 12 fewer shots per game than the league-leading Minnesota Timberwolves (41.7). While their 111.3 points per game entering Sunday night’s game in Dallas ranked eighth in the league, the Bulls still are tinkering with how to maximize their offense.

So should the Bulls take more 3-pointers? For coach Billy Donovan, the answer is complicated.

“I’d like for us to take some more. I think that would be good,” he said. “But I also think that one of the areas we’ve got to get better at is playing downhill.

“When you get downhill and you force rotation and you force a second defender into the paint to help, that’s when your spray-out 3s really start to come. I don’t love just saying randomly, ‘Hey, we’ve got to take more 3s.’”

Donovan wants the Bulls to emphasize creating 3-point opportunities through ball rotation rather than encouraging his players to fire haphazardly from long distance.

Despite boasting All-Star center Nikola Vučević and a deadly slasher in Zach LaVine, attacking the rim hasn’t been a strong suit for the Bulls this season. They rank in the bottom half of the league in rim attempts from within five feet of the basket.

Whether it’s starters such as LaVine and Lonzo Ball or depth shooters such as Coby White, Donovan prefers to use inside-out passing to open up chances rather than encourage players to fire at will.

Vučević sits at the heart of this approach. Although he operated in a post-up-heavy offense with the Orlando Magic, Donovan wants Vučević to become a facilitator for the Bulls.

If used efficiently in the pocket, Vučević can attract double teams and force opponents to sag off their perimeter defense, opening spray-out 3-point opportunities. These catch-and-shoot looks are typically easier for players such as LaVine, garnering a higher gain than stand-up chances taken with an opponent in tight defense.

“I don’t think that all 3s are created equally,” Donovan said. “Certain 3s are just bad in my opinion. You’ve got to get the right ones.”

That message has been clear since the start of the season. The Bulls might be dead last in 3-point attempts, but they also lead the league in 3-point accuracy, making 38.7% of their shots behind the arc entering Sunday.

DeMar DeRozan is the most tightfisted of the Bulls from long range despite leading the team in scoring with 26.5 points per game.

Famed for his lethal midrange jumper, DeRozan has never been known as a 3-point sharpshooter. (Assistant coach Chris Fleming joked that DeRozan is an excellent 3-point shooter, but he always leaves his toe on the line.)

DeRozan has shot 28.5% from behind the arc in his career, averaging less than one basket per game in each of his four All-Star seasons. This is actually a high-scoring 3-point season for DeRozan — his 2.1 attempts and 0.8 makes per game have been matched only once, in the 2017-18 season.

To Donovan, DeRozan is an example of a player whose game doesn’t need a newfound emphasis on the 3-pointer.

“We’ve always felt like DeMar has been a good 3-point shooter, (but) he’s selective,” Donovan said. “I have not at all since DeMar has been here tried to put it in his brain that he needs to take more 3s. We just want him to be who he is as a player and play to his strengths. When he’s open from 3, we certainly want him to take them.”

While he welcomes it, Donovan views the team’s current league-leading 3-point shooting clip as unsustainable. The Bulls are in their best 3-point shooting swing, but this hot streak has been complemented by leaguewide player shortages due to COVID-19 outbreaks, offering an unrealistic sampling of teams’ defensive acumen.

Ultimately, Donovan believes increased 3-point shooting should be viewed as a bonus, rather than a goal, for an improved Bulls offense.

“I’m not trying to be critical of our guys,” Donovan said. “You’re always trying to look at ways to improve and continue to evolve as a team to get better and put things on guys’ brains.

“I don’t necessarily need to take more 3s. I think we need to get downhill more. That gets you to the free-throw line, that opens up offensive rebounding and then it opens up opportunities to shoot 3s.”

Sources: Ben Simmons and Tobias Harris could be traded West as the Kings continue to put on full-court press

How bad do the Sacramento Kings want Ben Simmons?

Bulls guard Alex Caruso eager to get back on the court

"I’m just itching to get back and win," Alex Caruso said ahead of Wednesday night's game.

CHICAGO (AP) — Chicago Bulls guard Lonzo Ball will have arthroscopic surgery on his left knee and is expected to be out six to eight weeks, the team announced Thursday. 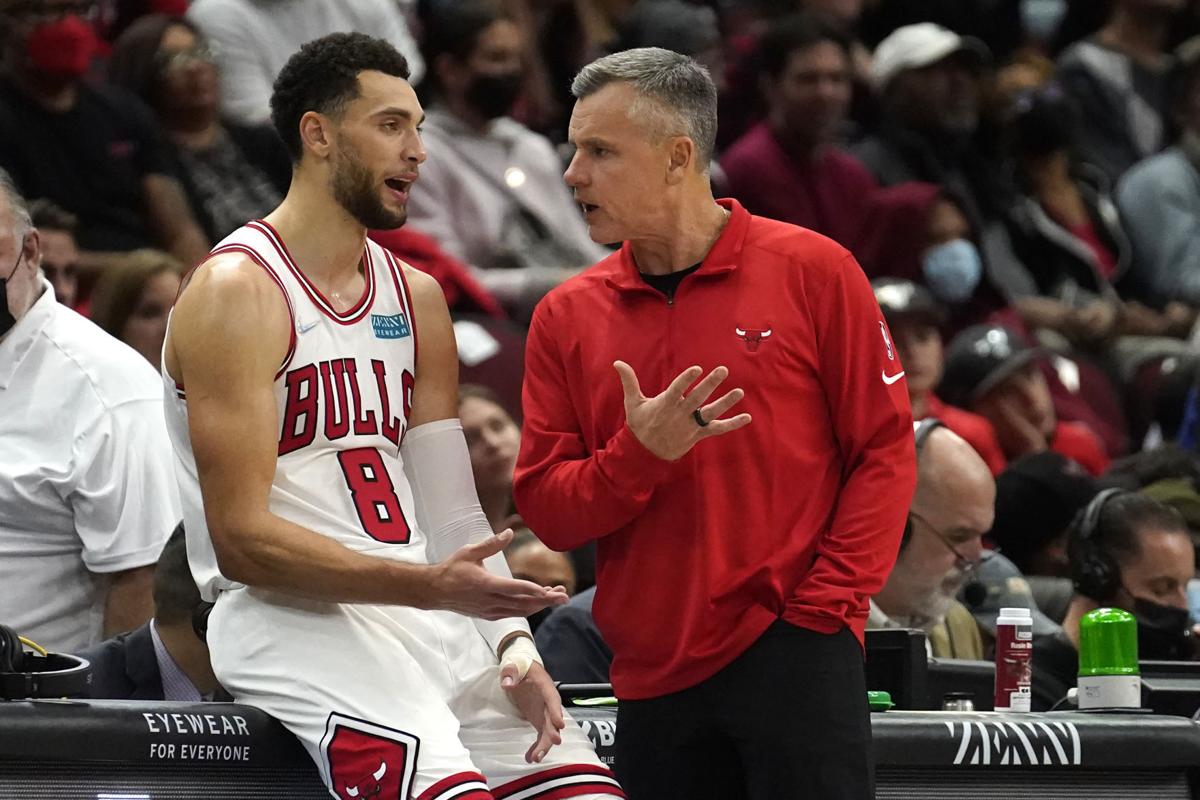 Chicago Bulls head coach Billy Donovan, right, talks with Zach LaVine during the second half action of an NBA basketball game against the Brooklyn Nets Monday, Nov. 8, 2021, in Chicago. The Bulls won 118-95. 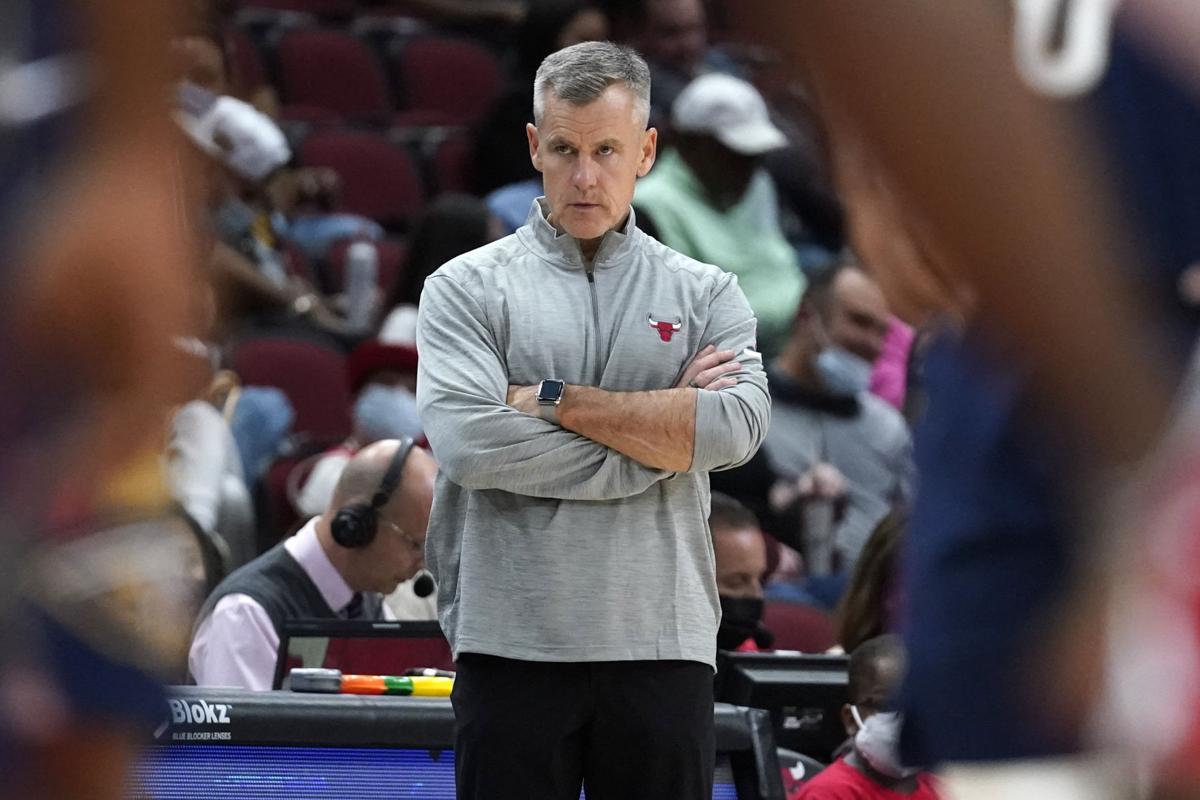 Chicago Bulls head coach Billy Donovan watches his team during the second half of an NBA preseason basketball game against the New Orleans Pelicans in Chicago, Friday, Oct. 8, 2021. 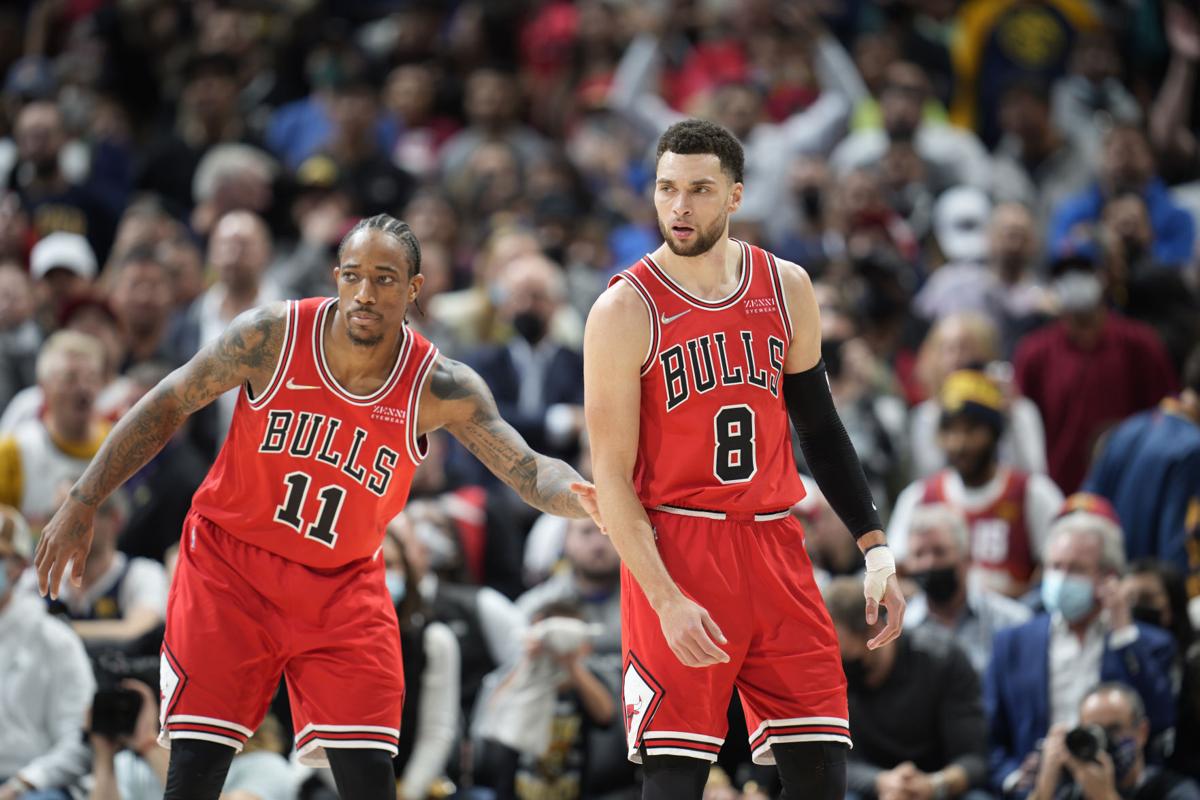