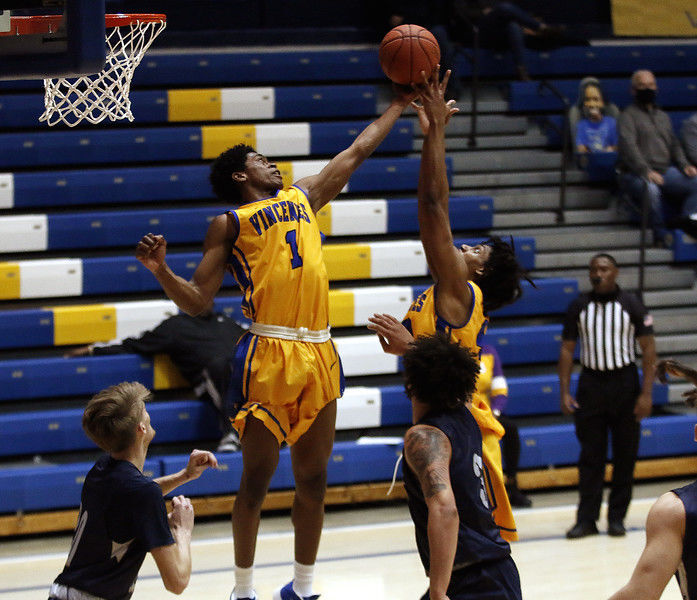 Rock Island alum Randy Tucker goes up for a rebound for Vincinnes during a game earlier this season. 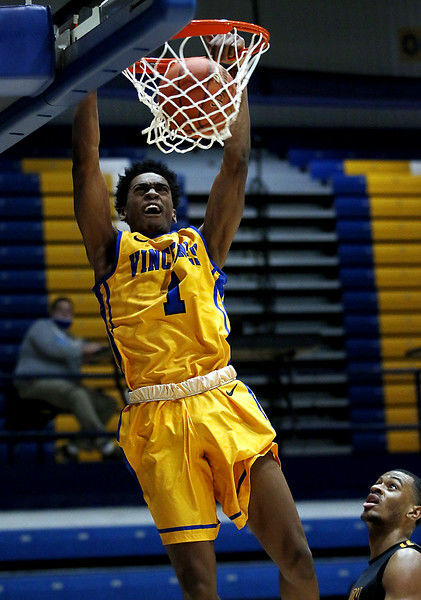 Vincennes Univeristy guard Randy Tucker, a sophomore from Rock Island, dunks during a game against Triton earlier this season. 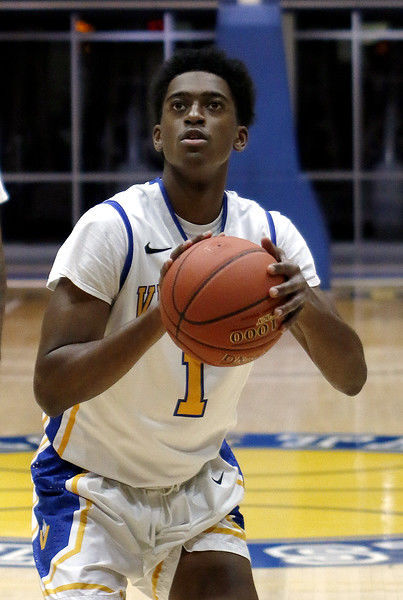 Vincennes guard Randy Tucker, a sophomore from Rock Island, looks to shoot during a Trailblazers game this season.

Starting in the backcourt for the one of the nation’s elite junior college basketball programs, Randy Tucker views things differently this season.

The 6-foot-4 sophomore from Rock Island has helped Vincennes University play its way to a 13-5 record and No. 15 ranking in the most recent NJCAA Division I men’s basketball poll.

"The wins and losses, they still matter, but I don’t take the chance to have a season this year for granted," Tucker said. "It’s a blessing to be able to be out there with my team playing games, and I’m thankful we are just having a season."

While some junior colleges opted to forego competitive schedules this year because of COVID-19 concerns, Vincennes is among those participating in a delayed season that began in late January and will culminate with postseason play in April.

Tucker works to make the most of every day.

He has started in 16 of the Trailblazers’ 18 games and is part of a team built around balance.

But, Tucker has worked to develop his game beyond numbers on a stat sheet.

He feels fortunate to have played for coaches at the high school and college level who are known for their ability to teach the game —  Thom Sigel at Rock Island and NJCAA Hall of Fame coach Todd Franklin at Vincennes.

"I just try to be a sponge," Tucker said. "When you’re around people like that, coaches who really know the game and challenge their players to become the best they can be, I listen to what they have to say and learn what I can."

Tucker senses growth in his game over the past two seasons at the junior-college level.

Some of it has been out of necessity, rising to match the level of competition he now faces on a regular basis.

Some of it has been a byproduct of the work Tucker has put into his game.

When the junior college season abruptly ended a year ago and students finished the spring semester virtually at the onset of the COVID-19 pandemic, Tucker found himself back in the Quad-Cities.

He continued to train, first on outdoor courts and then at Beyond the Baseline in Davenport and the Rock Island Fitness and Activity Center as they re-opened.

While he missed the chance to spend the summer working out with teammates at Vincennes, Tucker was determined to make the most of the time in hopes that the current season would take place.

The results have led Tucker to average 8.4 points and 5.3 rebounds per game on a Trailblazers team which has won five of its last six games, losing only on the road to fourth-ranked John Logan College.

He believes there are lessons to be learned from the wins and the losses, things that will help Vincennes compete as it works toward the end of its regular season on April 1.

"The biggest thing I’ve developed since I’ve been here is mental toughness. I feel like I’ve become a more tenacious player and that has helped me rebound better," Tucker said. "The game at this level is so much more physical, and I’ve had to make adjustments to compete that way."

Tucker considers that a good step forward, but he sees room for continued development as he matures as a player.

"I’m never satisfied with my game. That’s just who I am," he said. "I’ve always been a guy who will get a lot of shots up, but my goal from one day to the next is to keep improving, keep building to become a better player."

His areas of focus this season have included working to finish through contact at the rim and strengthen his pull-up game off the dribble.

Both are parts of the game where a strong mind and strong body can be beneficial.

Tucker senses progress, but he’s quick to add, "I know I can get better. The work is never done."

That work remains Tucker’s focus. He’ll begin to think about the future once the current season ends.

"Right now, everything is about doing what I can to make this season as good as it can be," Tucker said. "I cherish the moment, the chance to play and compete. This season means a lot to me."

* Darby Hawtry, a former North Cedar HS prep from Clarence, Iowa, was named the offensive volleyball player of the week in the American Rivers Conference. She led Dubuque in kills in wins over Wartburg and Nebraska Wesleyan.

* Have a suggestion for a future Alumni Report? Contact Steve Batterson at sbatterson@qctimes.com or 563-383-2290.

Some props to look at tonight between the Lightning and Islanders

Some props to look at tonight between the Lightning and Islanders

Look for the under when it comes to Giannis's points prop

Look for the under when it comes to Giannis's points prop

Dan Woike: LeBron James on mounting NBA injuries: I told you so

With each cellphone chime, the day got a little crazier.

Benjamin Hochman: NBA is in the midst of a bizarre (but fascinating) postseason

The Hawks are in the Eastern Conference finals, hoping to advance to the NBA Finals for the first time since ... they played in St. Louis.

The Nets’ stars didn’t win a championship for Brooklyn, but they’re going to try to win one for America.

Vanessa Bryant remembered her late husband Kobe Bryant as “the best girl dad” in a sweet post on Father’s Day.

Kareem Abdul-Jabbar's 'Fight the Power' tackles the history of protest

In late April, when Derek Chauvin was found guilty on charges of murder in the death of George Floyd, the moment, for Kareem Abdul-Jabbar, reinforced a theme that is at the center of his documentary "Fight the Power: The Movements That Changed America": Protest matters.

Rock Island alum Randy Tucker goes up for a rebound for Vincinnes during a game earlier this season.

Vincennes Univeristy guard Randy Tucker, a sophomore from Rock Island, dunks during a game against Triton earlier this season.

Vincennes guard Randy Tucker, a sophomore from Rock Island, looks to shoot during a Trailblazers game this season.