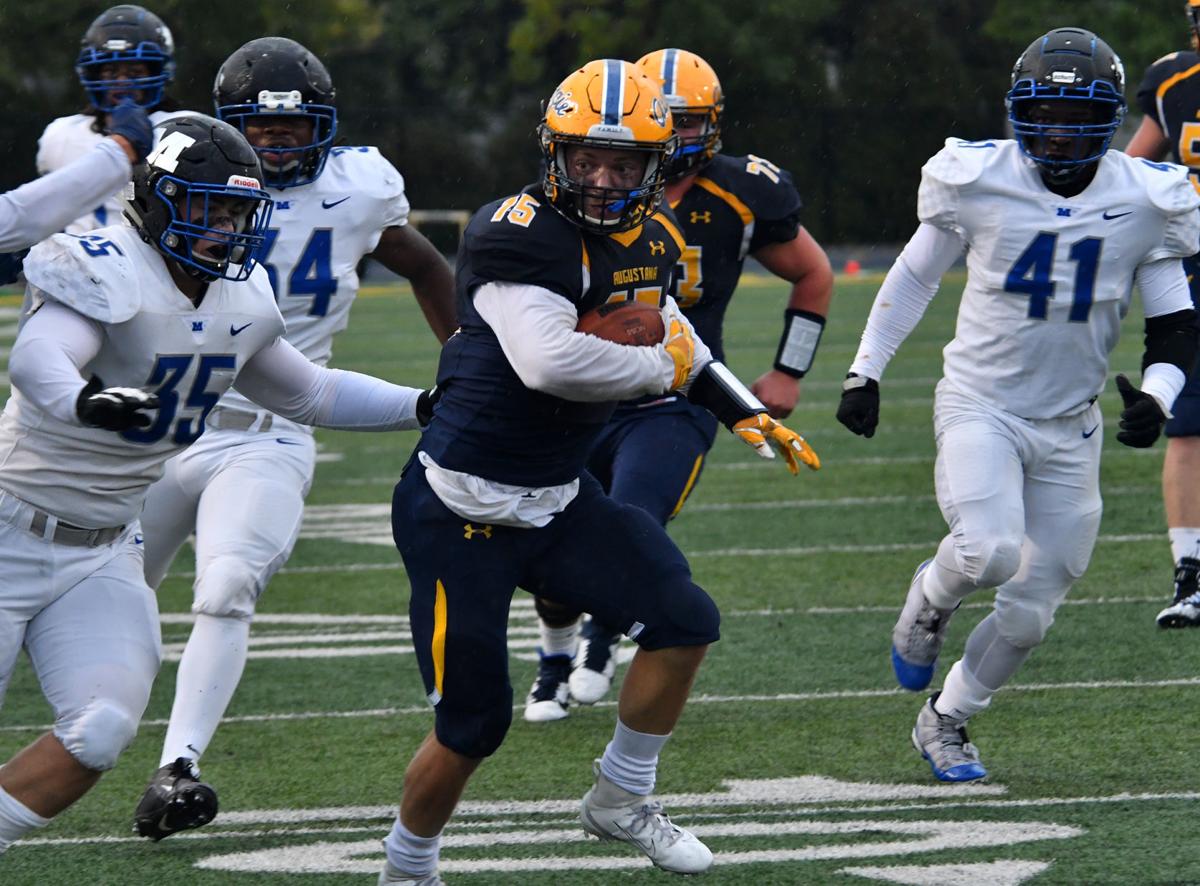 Augustana running back Bobby Jarosz has shown a knack for finding holes in opposing teams' defenses, as he did here last week against Millikin at Augustana's Lindberg Stadium. 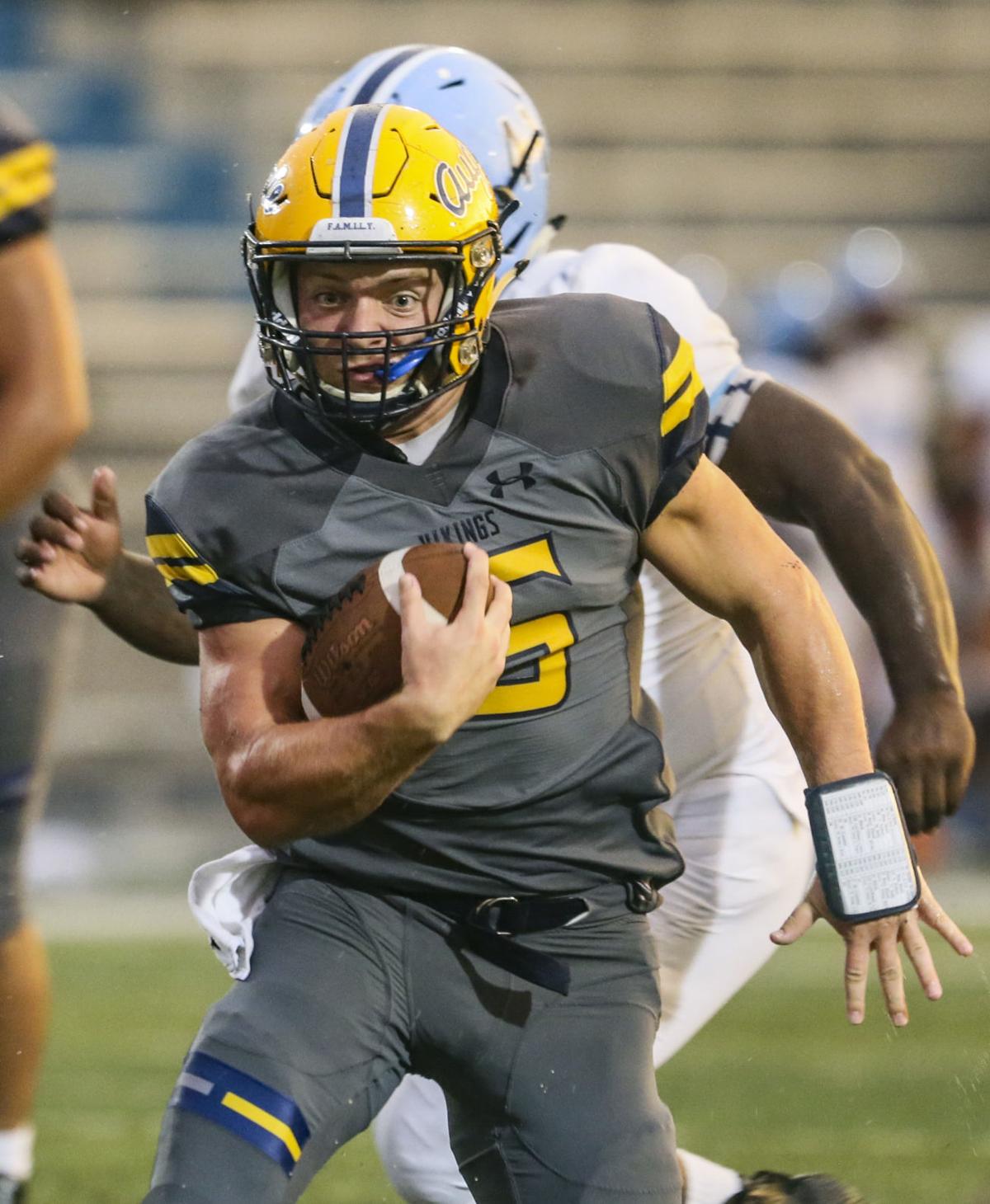 Augustana's Bobby Jarosz (15) darts to the end zone with Elmhurst's Lavor Little (41) closing in behind at Lindberg Stadium, Saturday, Sept. 21, 2019, in Rock Island. 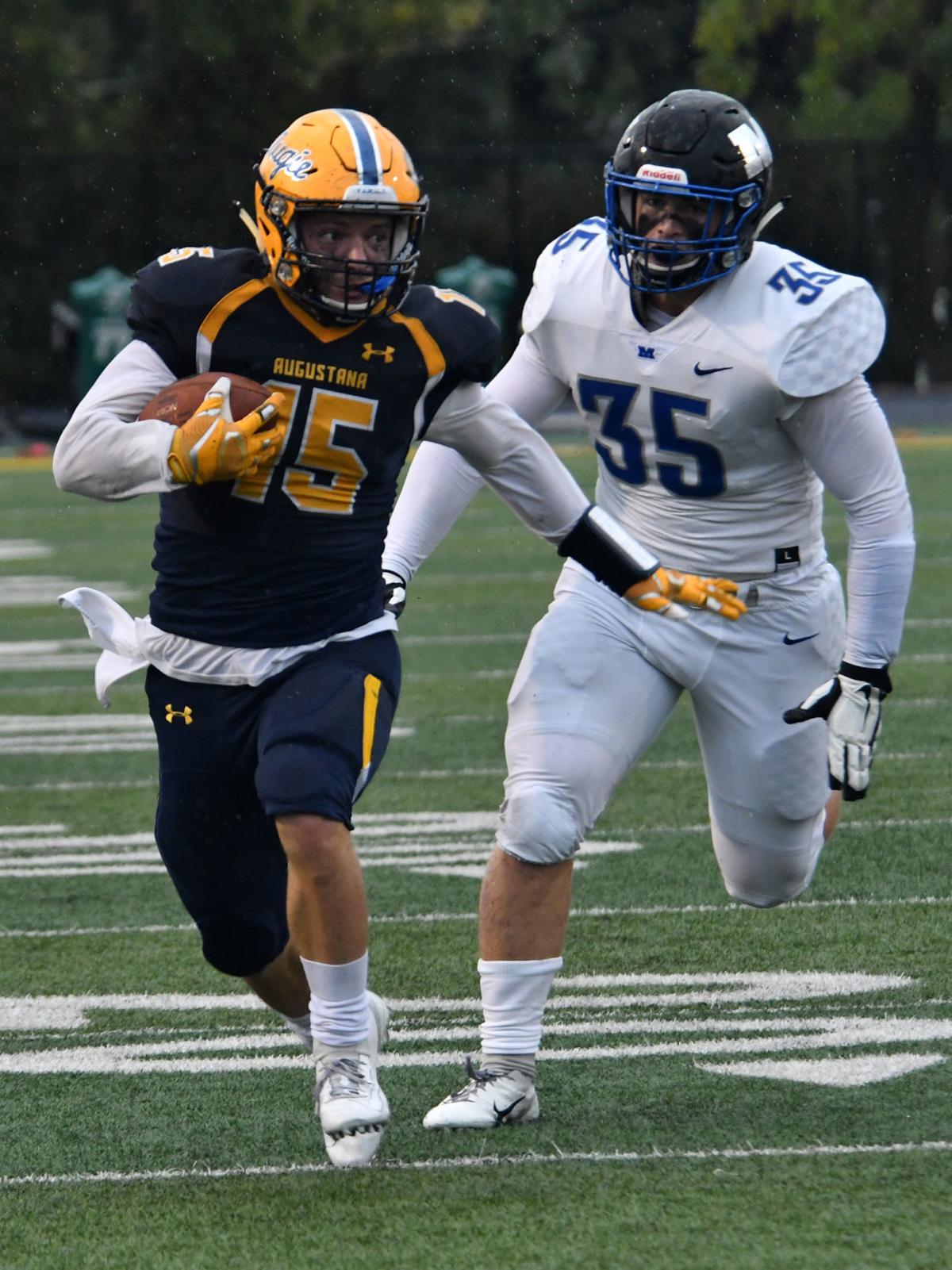 Augustana's Bobby Jarosz is given chase by Millikin's Matt Brown during the first half Saturday at Augustana's Lindberg Stadium.

Running back Bobby Jarosz is a lot of things to the Augustana football team this fall.

He is the team's leading rusher. He is second on the squad in yards per catch. And he may also lead the Vikings in laughs.

“He definitely has a dynamic personality,” said Augie football coach Steve Bell of his senior running back, hinting that Jarosz has a jovial side. “He's a character.”

Jarosz did his best to downplay it, but his teammates and coaches are adamant that there's more to Jarosz than quick cuts and long runs. Throw in some quick one-liners and a feisty approach to the game nurtured from a stellar prep wrestling career and you have a guy who can keep things light on the field or control the team room.

“Being loud is the reputation I have,” he admitted. “I guess I like to joke around a little bit.”

He showed some of that personality trying to figure out which of his teammates gave up inside secrets on his behind-the-scenes self and vowing revenge on the perpetrators — of which there are many.

His infectious smile and genial demeanor are indications there is plenty of truth to what teammates are saying about him.

On Saturday's, though, you can tell it's all business for the finance and business management major who hopes to someday be a financial adviser. This past weekend, in a 40-14 homecoming victory over Millikin, Jarosz showed his entire repertoire as he rushed for a career-high 143 yards on 24 carries. He also caught one pass for 18 yards.

“He's a threat in the backfield whether he's running it or going out for screens and different rout concepts,” said fifth-year senior quarterback Zach Fuller of Augie's No. 1 back. “He's been really good for us this year.”

Well, actually, he's been pretty good for four years now. It was just that he found himself behind former Geneseo standout Ryan Pitra for three of those seasons.

“I've been waiting for it,” said Jarosz of being the top back. “I came here thinking I was going to be in the No. 1 role, but obviously I was behind Pitra. Me and Pitra were best friends — he's one of the closest guys to me. I learned so much from him — the great back that he was, he could receive, he could block, he could do everything. I learned a bunch from him.”

Now it's Jarosz's turn and in less than half a season he has delivered so far for the 3-1 Vikings. In 84 carries, the Prospect High School prep has rushed for 432 yards and three TDs — all are team highs. He also has 10 catches for 143 yards and another TD. Coming into this season in 27 career games, he had 151 carries for 703 yards and additional 208 yards on 23 catches. Showing his nose for the end zone, he had 13 career TDs, leading the team in scores in both his freshman (four) and junior (eight) seasons.

“I knew this was my year to shine and I wanted to give it everything I had,” said Jarosz. “The coaches trust me, Fuller trusts me, my o-line trusts me, It just comes down to putting in the hard work.”

All that hard work is paying off. The muscular 5-foot-9, 190-pounder admits that he came into this season both faster and stronger than ever.

“I think I got faster, working out in the off-season,” he admitted. “I obviously got stronger; you're trying to break records and PR yourself. You do that and it translates to the field.”

Jarosz figures that his work ethic and workout mentality come from his wrestling background. While shunning offers to join the Viking wrestling program — “although I've though about it,” he admits — it was that connection with Pitra, a state medal winner, that allowed the two to bond.

“Me and him were both state wrestlers so that's how we linked together really quickly; we both had the same attitude toward things,” said Jarosz. “The one thing I learned from him was work ethic. We were always racing to be first in wind sprints or any type of drills. We were always competing against each other. Basically to set the example for everybody else and work your (butt) off. Work hard so everybody looks up to you.”

Mission accomplished on that front. And that has resulted in a senior season that is off to a great start and admiration from teammates.

“There was no doubt in my mind,” said Fuller of being confident that Jarosz could put up the numbers he has. “He was producing behind Pitra the last couple of years. I knew we wouldn't have any issues. In the last year, he's really improved on his ability to bounce outside the box. He's been really big following his lead blockers and being more patient — he can really fit through little windows of opportunities.”

That really showed last week. Jarosz employed a shifty running style that displayed his vision and ability to find the holes as they opened. Very few of his runs were in straight lines — resembling lightning bolts as he cuts through the Big Blue defense.

“He's got a knack at the point of attack of slipping, instead of taking a full-on hit,” said Bell. “... Then he's strong enough. He's not a big dude, but he's strong with a low center of gravity and can run through those arm-tackle situations. He's got nifty feet, so in space he can dance around an angle tackle.”

All of which has made him a very valuable offensive weapon for the Vikings.

Augustana running back Bobby Jarosz has shown a knack for finding holes in opposing teams' defenses, as he did here last week against Millikin at Augustana's Lindberg Stadium.

Augustana's Bobby Jarosz (15) darts to the end zone with Elmhurst's Lavor Little (41) closing in behind at Lindberg Stadium, Saturday, Sept. 21, 2019, in Rock Island.

Augustana's Bobby Jarosz is given chase by Millikin's Matt Brown during the first half Saturday at Augustana's Lindberg Stadium.