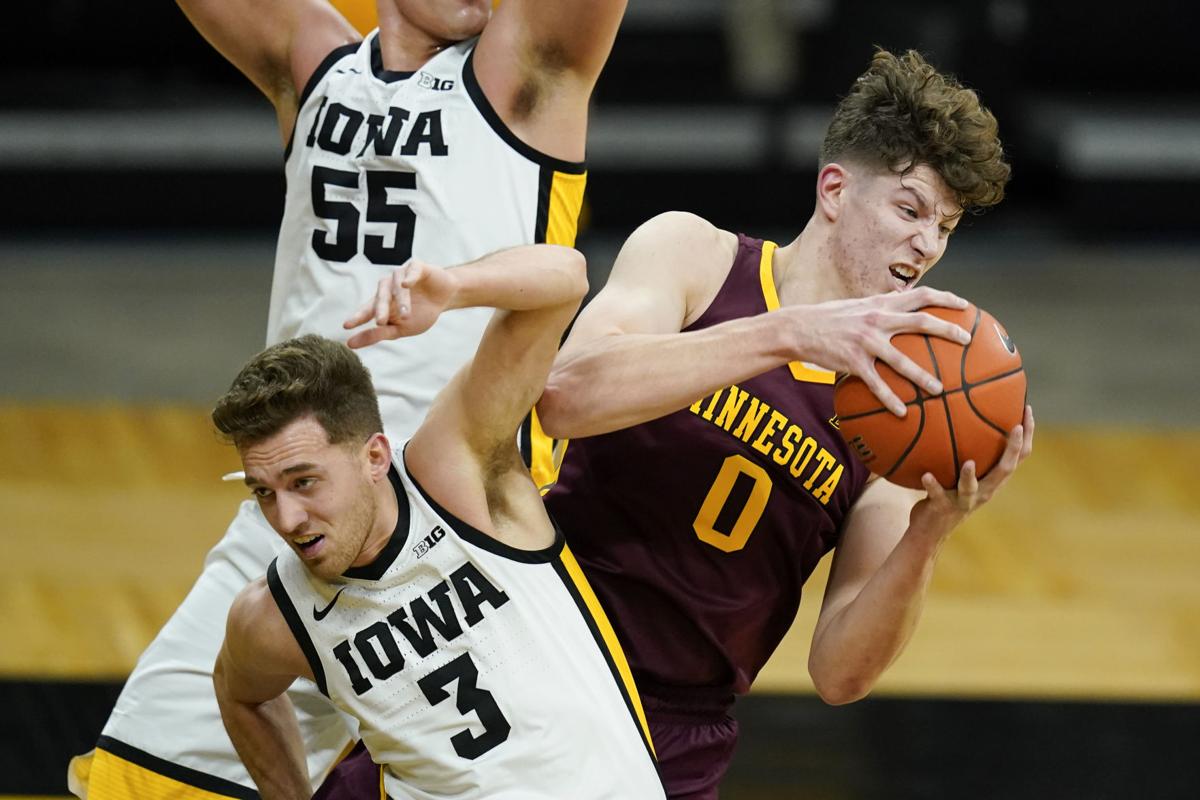 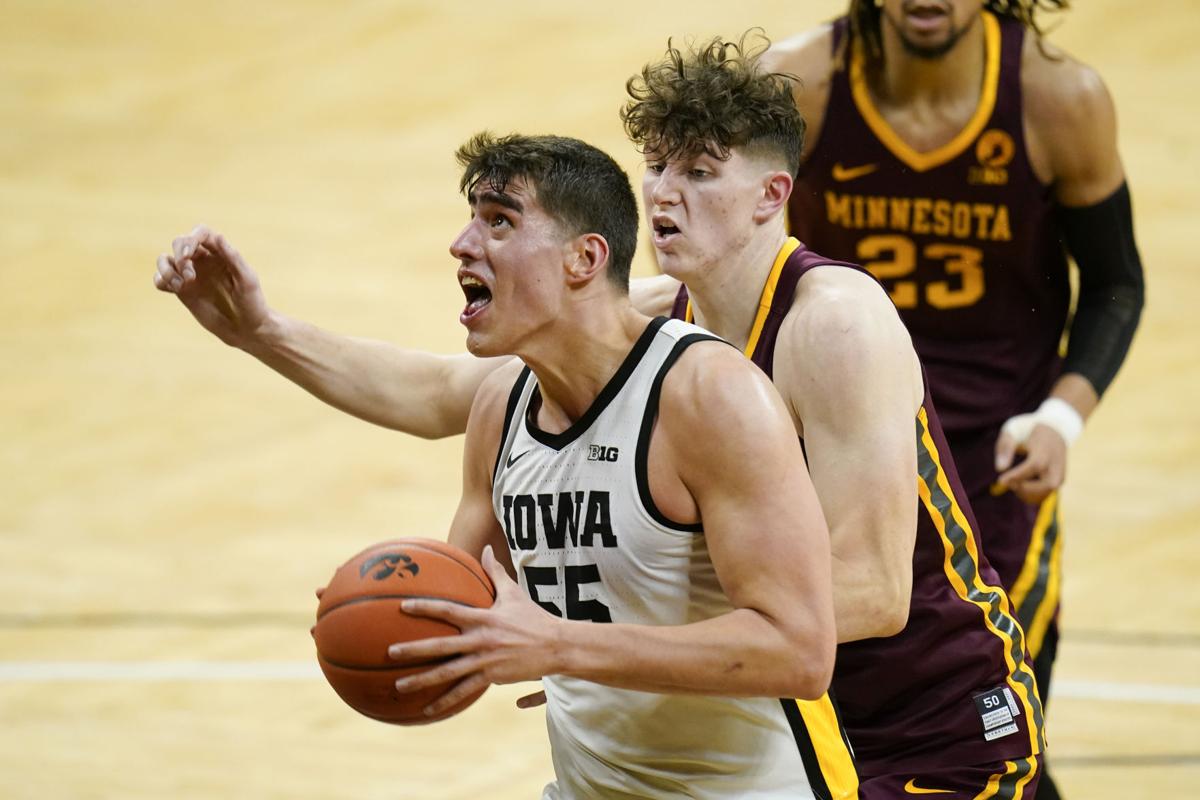 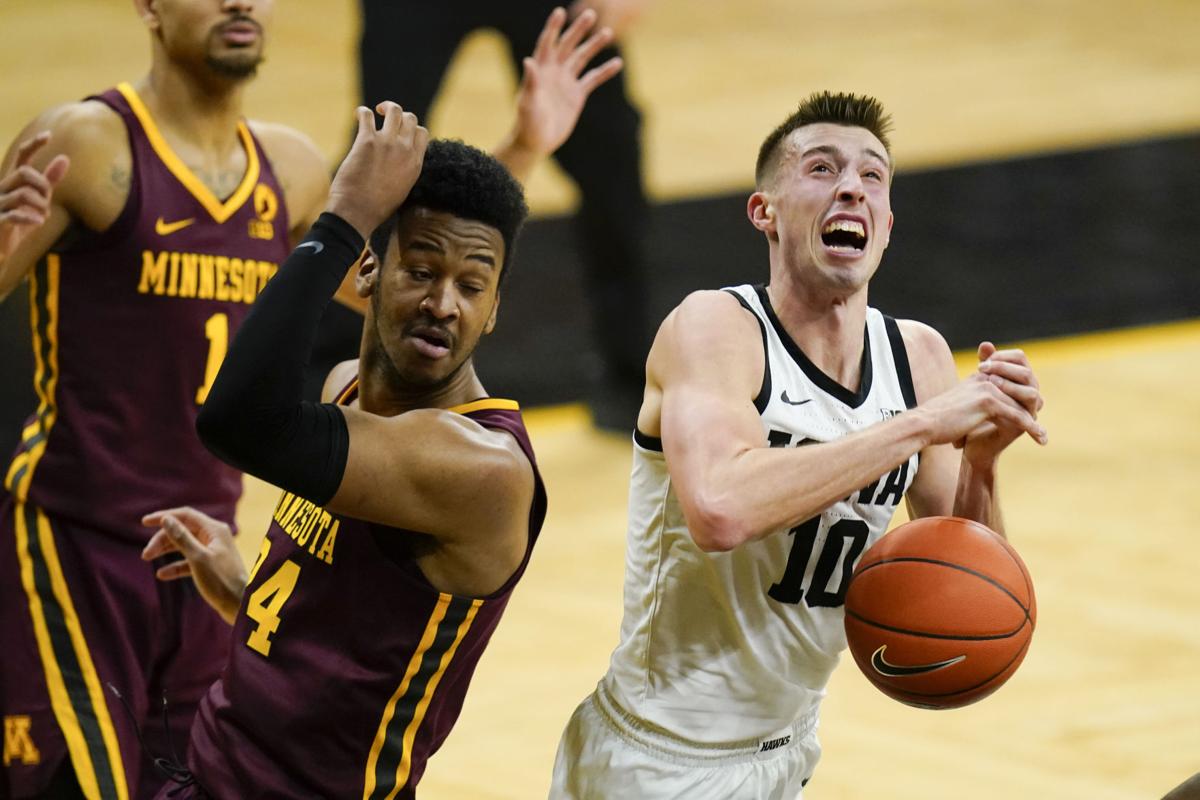 Iowa guard Joe Wieskamp (10) loses the ball in front of Minnesota forward Eric Curry during the second half of Sunday's Big Ten Conference basketball game in Iowa City. Wieskamp scored 20 point to eclipse the 1,000-point plateau in the 86-71 victory.

IOWA CITY — When the Iowa basketball team visited Minnesota for a rare Christmas night game a few weeks ago, it didn’t end up being a very merry moment.

The Hawkeyes held a 7-point lead in the final minute but struggled to defend the 3-point line and ended up suffering their only Big Ten Conference defeat in overtime.

They haven’t lost since. And when they got another shot at the Golden Gophers on Sunday afternoon at Carver-Hawkeye Arena, they wanted to make sure they delivered a message.

Jordan Bohannon played what his coach described as a “practically perfect’’ game and got plenty of help from Luka Garza, Joe Wieskamp and others as the No. 5-ranked Hawkeyes rolled to an 86-71 victory over No. 16 Minnesota to extend their current winning streak to four games.

“Our loss up there on Christmas night definitely has been in the back of our minds ever since it happened,’’ said Wieskamp, who broke out of a recent slump to score 20 points and become the 50th Iowa player to surpass 1,000 points for his career.

“This game was kind of personal for us.’’

Bohannon put together even more staggering numbers in what statistically was the best game of his 125-game college career. He scored 19 points and registered career highs in both assists (14) and rebounds (7). And he did it without committing a single turnover.

Iowa coach Fran McCaffery said he couldn’t recall ever seeing a stat line quite like that.

“It was tough playing on Christmas and not getting the win,’’ Bohannon said. “That was a tough time for myself and our team. We let one slip away and as we came off the court a couple of (Minnesota players) may or may not have talked crap to us … That definitely provided fire for myself coming into this game.’’

Garza continued his charge toward becoming Iowa’s career scoring leader with 33 points, doing much of his damage simply by sprinting up and down the floor to get easy baskets. Bohannon recorded assists on 10 of Garza’s 13 made field goals.

“I just kept running the floor as good as I could today and J-Bo kept finding me,’’ Garza said.

Wieskamp agreed that Bohannon completely set the tone for the contest.

“With the way Luka ran and Jordan got the ball to him. I felt like I was just getting some conditioning at some point because I was just watching Luka lay it up,’’ he joked. “That’s just how we play and how we want to play.’’

In spite of that, it was hardly an easy win. The Hawkeyes (11-2, 5-1 Big Ten) led by only two points at halftime and when former Davenport Assumption High School player Liam Robbins made two free throws to open the second half, it was 39-39.

But Bohannon sank a 3-pointer out of the left corner off a long pass from Garza to kick off a 22-4 scoring run that included 10 points by Garza and 6 apiece by Bohannon and Wieskamp.

That gave the Hawkeyes a 61-43 lead before the Gophers, who made just one field goal in the first eight minutes of the half, recovered. They chopped the deficit to five points on two occasions with about five minutes remaining before Bohannon got the ball to Garza for yet another layup. After Robbins missed two foul shots, Bohannon sank a pair of free throws and Jack Nunge drilled a mid-range jumper to give the Hawkeyes some breathing room.

McCaffery said it was just a matter of having his players stay the course at that point and continue to do what they had been doing.

Nunge, who finished with 10 rebounds, made several key plays defensively and on the boards over the next few minutes and Wieskamp and Bohannon each drilled a clinching 3-pointer in the closing minute.

“We weren’t going to let it happen again,’’ Garza said. “I think we just needed to lock in and get a couple of buckets and get back in transition and get stops.

“We had a lot of stops throughout the game where we just didn’t finish it off by getting the rebound. Jack Nunge was terrific down the stretch getting all those rebounds. I’m super proud of him. He helped us win this game with some of the biggest plays.’’

Marcus Carr and Both Gach scored 13 points apiece to lead the Gophers (10-4, 3-4 Big Ten). Brandon Johnson, who burned the Hawkeyes with eight 3s in the earlier loss, collected 12 points and eight rebounds and Robbins added 10 points.

For the first time, the Iowa men’s basketball team has had a game postponed due to COVID-19.

McCaffery: We need to make up all the games

Fran McCaffery knew this was going to happen sooner or later.

Iowa guard Joe Wieskamp (10) loses the ball in front of Minnesota forward Eric Curry during the second half of Sunday's Big Ten Conference basketball game in Iowa City. Wieskamp scored 20 point to eclipse the 1,000-point plateau in the 86-71 victory.