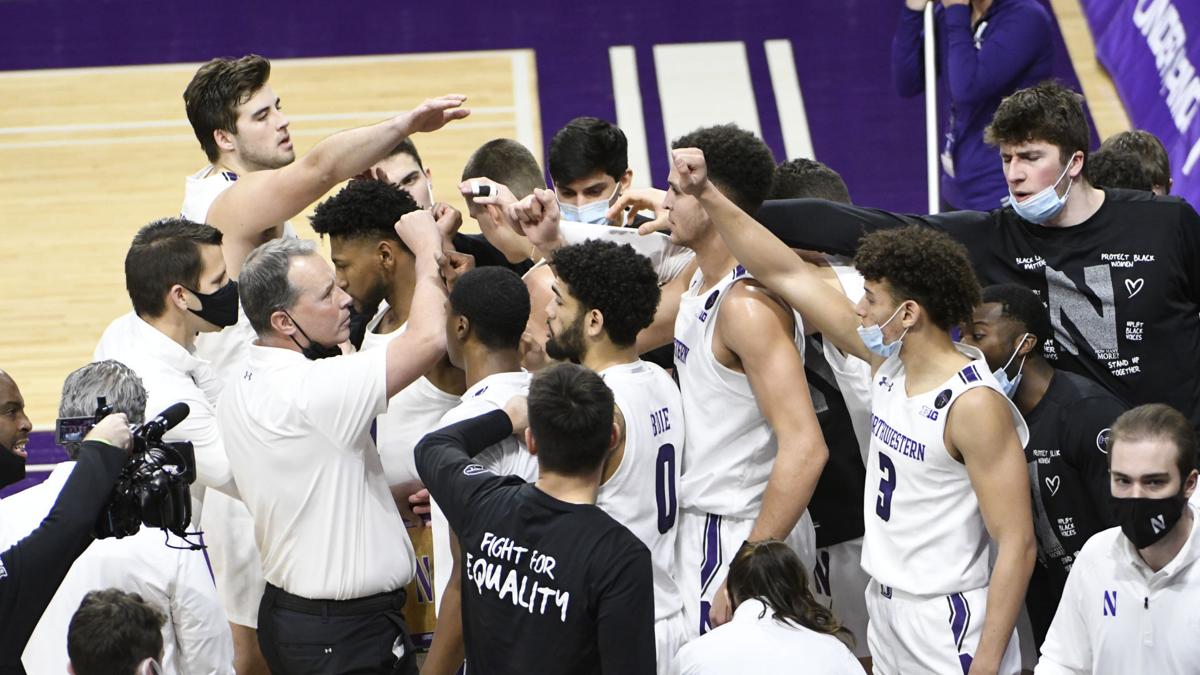 Northwestern huddles up during last weekend's game against Ohio State. The Wildcats are averaging more than 85 points per game and ranked 19th in the Associated Press poll. 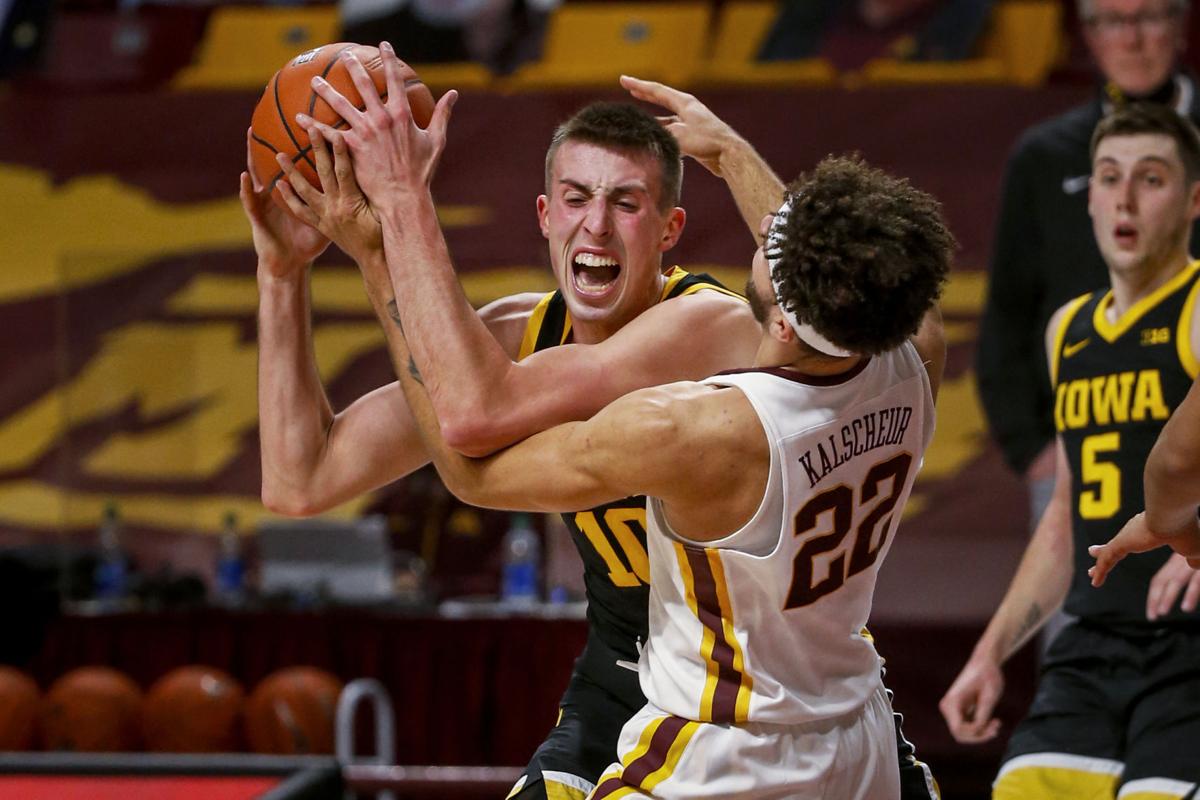 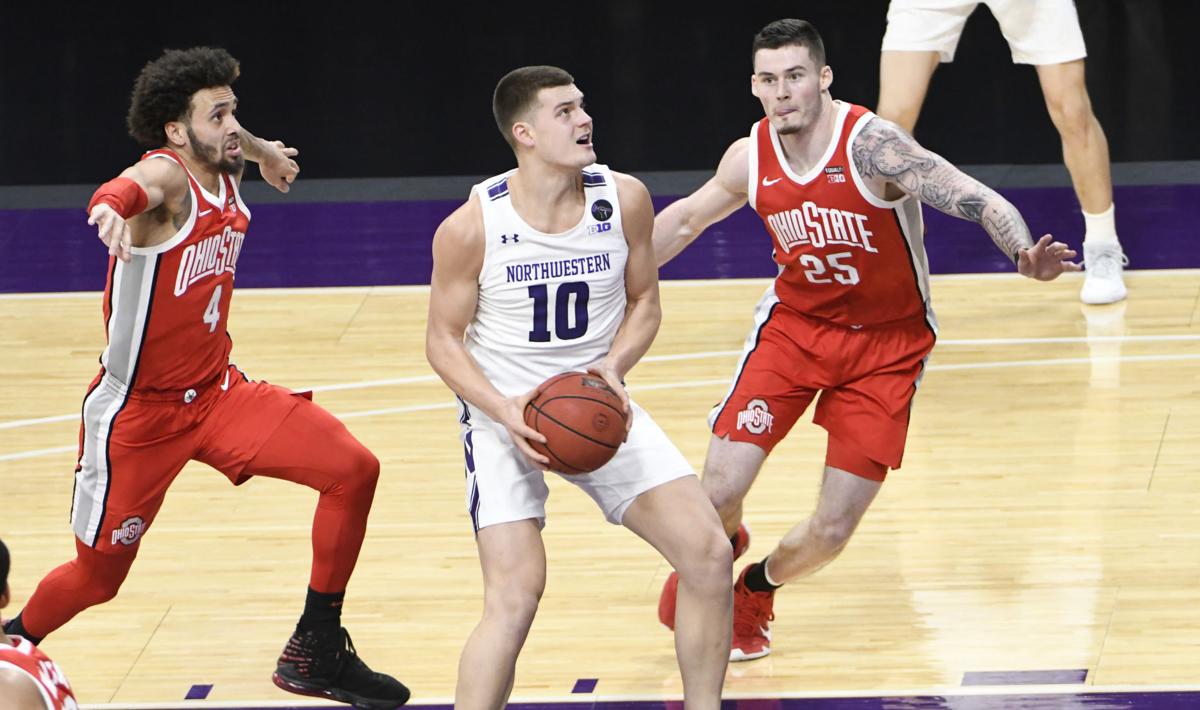 Northwestern forward Miller Kopp drives to the basket as Ohio State forward Kyle Young (25) defends during the second half of Saturday's game in Evanston, Ill. The 19th-ranked Wildcats visit Iowa on Tuesday night.

When Big Ten Conference men’s basketball title contenders were thrown out by pundits before the season, Iowa, Illinois, Wisconsin and Michigan State were frequently mentioned.

Rutgers, Michigan, Ohio State and Indiana received some attention, too.

Northwestern? The Wildcats were pegged to be toward the bottom or at the basement of the league in most prognostications.

But as we hit the final week of December, Northwestern has vaulted to 19th in this week’s Associated Press poll and is in first place in the Big Ten with a 3-0 mark. It has Top 25 wins over Michigan State and Ohio State along with a road victory against Indiana.

“They are playing like they have something to prove,” Iowa junior Joe Wieskamp said. “They didn’t have as good a season last year as they would have hoped, but they have a lot of guys that are playing really well right now, shooting the ball well and you can tell by watching film, they’re connected.

“They want to be a team whose name is mentioned at the top of the league. It is a good test for us.”

Northwestern (6-1) already has equaled last year’s win total in conference play and is off to its best conference start in 53 seasons.

It has increased its scoring output from 64.9 points per game to 85.3. It has six players averaging between 8.3 and 15 per contest. Its defense has limited opponents to 37.8% shooting and under 28% from beyond the arc.

“They’re playing with a chip on their shoulder and you respect that in them,” Iowa’s Connor McCaffery said.

The Wildcats are a year older. They’re also much healthier.

“Last year, we had a bunch of freshmen and young kids that didn’t know what it took to win in the Big Ten,” Collins said. “We threw them into the fire on purpose. We made the decision to go really young and to develop this core, with hopes over time they would get tougher, would get better, would get smarter in game situations and you’re seeing that happen.

“We are more confident and these guys have more belief than they did last year.”

Iowa coach Fran McCaffery could sense Northwestern was on the verge last season despite its record. McCaffery said it starts with Miller Kopp and forward Pete Nance, both who started as freshmen and are now juniors.

Anthony Gaines is back after playing only 11 games last year because of injury. Chase Audige sat out last season after transferring.

“So now (they) have depth on top of what is probably one of the best — forget about point guards — one of the best players in our league in (Boo) Buie,” coach McCaffery said.

This marks the first time in the 180 meetings between the teams that both are ranked in the Top 25.

While Northwestern is surging, Iowa tries to rebound from an overtime loss at Minnesota on Friday, a game in which it led by seven points with less than 45 seconds remaining in regulation.

A lack of defensive consistency has been the theme recently for the Hawkeyes.

Its defense labored throughout the game against top-ranked Gonzaga, was stellar versus Purdue and then had multiple breakdowns late in regulation and in overtime at Minnesota.

“I think the same type of effort we had against (North) Carolina and against Purdue is going to be necessary in this league,” coach McCaffery said.

“We can’t let one mistake become two,” Wieskamp said. “We’ve got to lock in and really correct those mistakes early on in games so it is not affecting us in late-game situations. We’ve got to figure that out on the road and stay locked in on the game plan when things aren’t going our way.”

Coach McCaffery confirmed Monday former Bettendorf and Iowa standout Nicholas Baer has joined the Hawkeyes as a graduate assistant. Baer, who joined the Hawkeyes last week, is completing his Masters degree this spring in sports and recreation management.

Baer started working toward his graduate degree in his final year playing for the Hawkeyes in 2018-19.

“We’re thrilled to have him as part of our program,” McCaffery said. “There is no better representative of everything we stand for than Nicholas Baer.”

Baer spent last year in the NBA’s G-League with the 905 Raptors, averaging 4.8 points and 4.4 rebounds in about 17 minutes per game.

“He was here for five years so he’s going to help us all out, see different things maybe the coaches don’t see and have a different perspective that can relate to the players maybe a little better than our coaching staff can,” Wieskamp said. “Having him on staff is a great asset for our team.”

Joe Toussaint has done plenty of good things for the Hawkeyes off the bench this season averaging 5.7 points and 3.3 assists per game. However, two missed free throws at the end of regulation Friday night that likely would have sealed the game left a bitter taste.

“I don’t think anyone expected him to miss both in that scenario,” Connor McCaffery said. “He was really upset with himself.”

During a workout Sunday when the Hawkeyes were shooting free throws, Toussaint made his first two attempts. He turned to Connor McCaffery and said: "That will never happen again."

"He was adamant about that," McCaffery said. "It was cool to see, to see his mentality in that. We all have confidence in him.”

Toussaint didn’t want to reflect on it during Monday’s meeting with reporters.

“To be honest, I’ve flushed the game from my memory,” he said. “When we got back, I watched film on it. I can take positives out of it, but we lost the game.

“I just have to stay the course, help the helper and stay confident. The main part is staying confident.”

Can The New York Yankees cover the 1.5 spread?

Can The New York Yankees cover the 1.5 spread?

Will Florida's Anthony Richardson be ready vs. Alabama?

Will Florida's Anthony Richardson be ready vs. Alabama?

Why are three undefeated teams ranked lower than they should be?

Why are three undefeated teams ranked lower than they should be?

On a day when the Iowa football program was preparing to play one of its most anticipated games of recent seasons, the Hawkeyes’ basketball pr…

It has become almost an annual tradition: Iowa and Illinois clashing head-to-head very late in the men’s basketball season.

Ayo Dosunmu is one of a kind

Former University of Illinois point guard Ayo Dosunmu will go down as one of the most impactful players in the history of Illinois basketball.…

It’s been a foregone conclusion for weeks but that inevitability doesn’t detract from the importance of this moment in Kentucky basketball recruiting.

Northwestern huddles up during last weekend's game against Ohio State. The Wildcats are averaging more than 85 points per game and ranked 19th in the Associated Press poll.

Northwestern forward Miller Kopp drives to the basket as Ohio State forward Kyle Young (25) defends during the second half of Saturday's game in Evanston, Ill. The 19th-ranked Wildcats visit Iowa on Tuesday night.