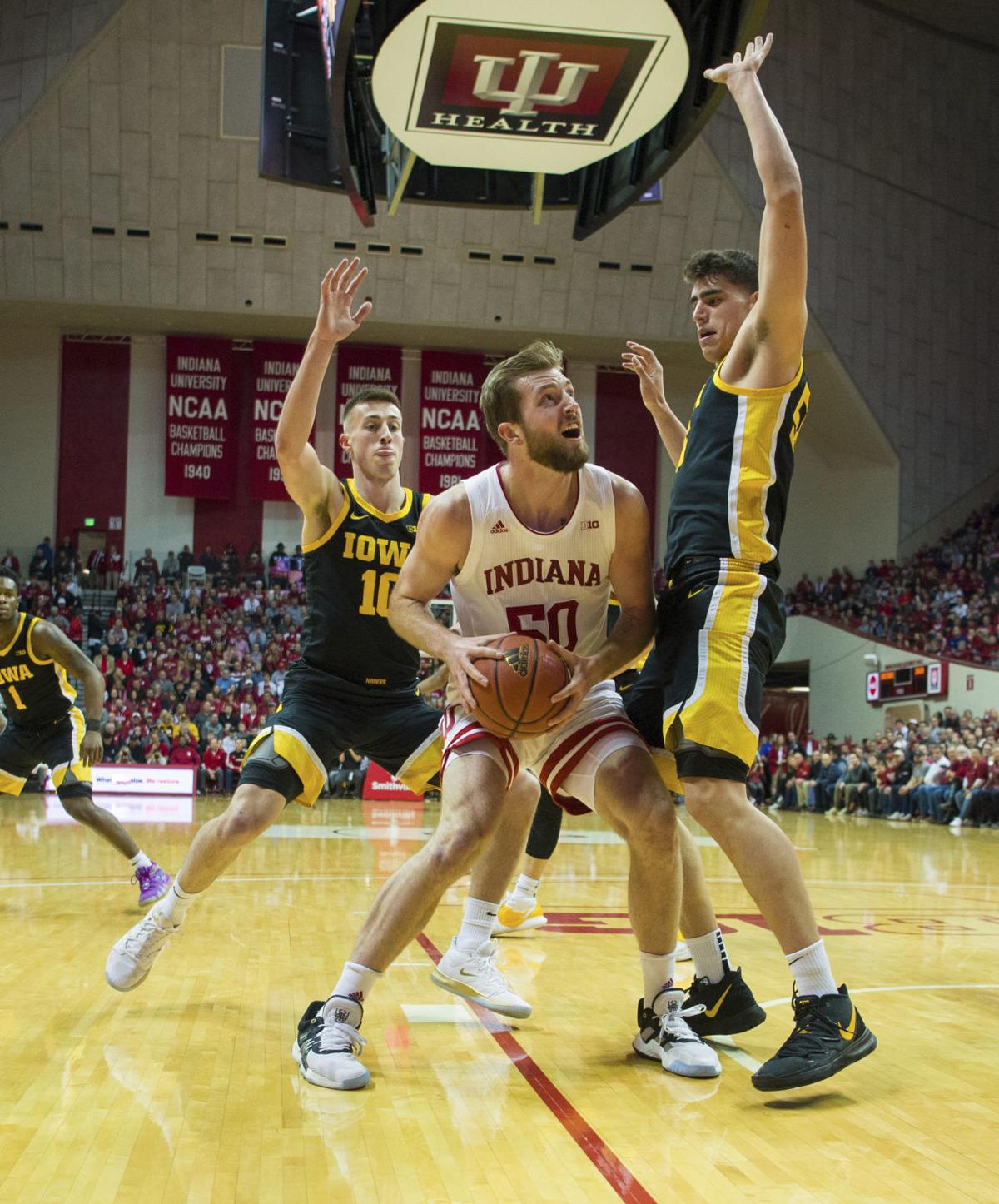 Indiana forward Joey Brunk is stopped by the defense of Iowa guard Joe Wieskamp, left, and center Luka Garza during the first half of Thursday's game in Bloomington, Ind. 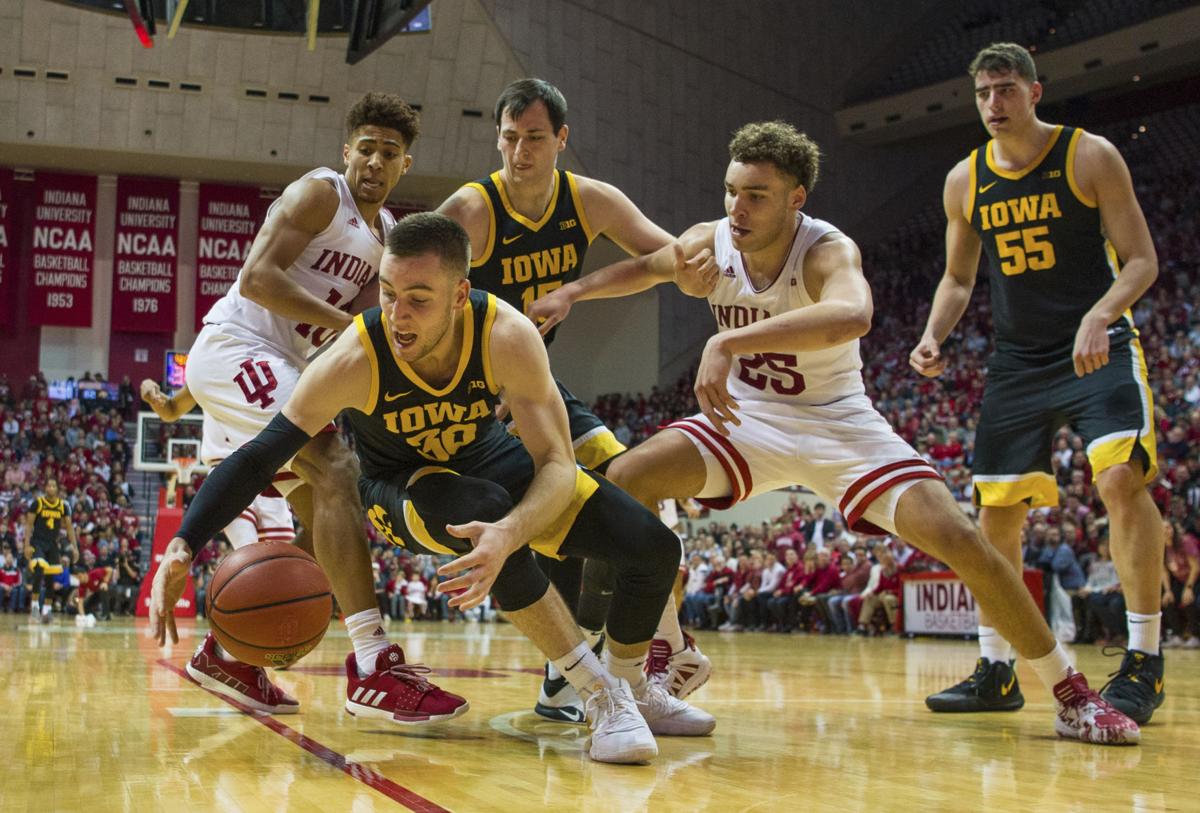 Iowa guard Connor McCaffery (30) falls on the ball during the second half of Thursday's game against Indiana in Bloomington, Ind.

BLOOMINGTON, Ind. — The Iowa basketball team hasn’t had good experiences in the state of Indiana lately.

For the second straight week, the Hawkeyes were victimized by a torrid shooting performance in the state as reserve guard Devonte Green lit them up from long range and led Indiana to an 89-77 victory on Thursday night at the Assembly Hall.

It wasn’t quite as humiliating as a 104-68 loss on the road at Purdue last week, but it looked similar at times as the Hawkeyes trailed by 10 or more points for the last 31 minutes.

Indiana, which had made and attempted fewer 3-point field goals than any team in the Big Ten coming into the game, made 11 of 21 shots from behind the arc. Green accounted for seven of those 3s and finished with 27 points.

That was more than enough to help the Hoosiers (16-9, 6-7 Big Ten) offset another extraordinary effort by Iowa’s Luka Garza, who scored 38 points. It was the 10th consecutive 20-point effort and the second highest point total of the season for the 6-foot-11 center.

Adding to the Hawkeyes’ problems was the fact that third-leading scorer CJ Fredrick went down with an injury to his right ankle in the first half and did not return to the game.

Fredrick, who missed 2½ games with a stress reaction in his left foot earlier in the Big Ten season, toppled to the court during a transition situation with 5 minutes, 24 seconds remaining in the half. He had to be helped off the floor and was unable to put any weight on his right leg.

Iowa coach Fran McCaffery said after the game that it was a sprained ankle but he did not offer any additional details.

Indiana, which snapped a four-game losing streak with the win, already had raced out to a double-digit lead by that time.

Green, who had scored in double figures in only two of the previous seven games, made four 3-point field goals in the span of about 2½ minutes early in the first half to get the Hoosiers jump-started.

His third and fourth 3s kicked off a 12-0 scoring run that also included three Green free throws and propelled the Hoosiers into a 31-16 lead.

The Indiana lead got as high as 17 (44-27) before the Hawkeyes got a spark off the bench from Bakari Evelyn and walk-on Austin Ash, and chopped the deficit to 44-34.

A fast-break layup by Justin Smith and another 3 by Aljami Durham with just a few seconds remaining in the half made it 49-34 at halftime.

Indiana coach Archie Miller felt his team’s ability to defend and force turnovers was an equally big part of the first-half onslaught.

“We held them down from 3, which was important,’’ he said pointing to the fact that Iowa was only 4 for 14 from 3-point range. “Our defense right up until the last 10 minutes was really good.’’

Led by Garza and Joe Wieskamp, who finished with 16 points, the Hawkeyes (17-8, 8-6 Big Ten) continually made runs at the Hoosiers in the second half although they never got any closer than 10 points.

Freshman Trayce Jackson-Davis added 17 points and 10 rebounds for the Hoosiers.

Iowa heated up late in the game and shot 50% from the field in the contest, but the Hawkeyes hurt themselves with 19 turnovers and gave up 16 offensive rebounds.

"I think the key was they got to the offensive glass and they really impacted the game that way,'' McCaffery said.

He said he felt his team showed much more toughness than it did at Purdue.

"But you've got to rebound better and you can't turn it over this much,'' he said.

Garza, who played all but 20 seconds in the game, made 14 of 22 shots from the field and also grabbed eight rebounds.

“He’s got to be the national player of the year,’’ Miller said. “I thought our guys actually did a decent job on him, but he’s able to just score in so many ways.’’

Iowa bench gets a bit shorter with Pemsl suspension

The Iowa basketball team finally took a day off Sunday.

After-thoughts from Iowa’s 89-77 loss to Indiana:

Iowa at Minnesota at a glance

Iowa at Indiana at a glance

Little-used Till could play big role against Hoosiers

With reserve forward Cordell Pemsl on the sidelines for one game, the Iowa basketball team will need to make a few adjustments Thursday night …

IOWA CITY — Connor McCaffery knows that no matter what he does or how well he plays, it’s never going to be enough for some people.

After-thoughts from Iowa’s 96-72 victory over Nebraska:

MINNEAPOLIS — It was sort of a perfect storm of adversity for the Iowa basketball team Sunday.

Indiana forward Joey Brunk is stopped by the defense of Iowa guard Joe Wieskamp, left, and center Luka Garza during the first half of Thursday's game in Bloomington, Ind.

Iowa guard Connor McCaffery (30) falls on the ball during the second half of Thursday's game against Indiana in Bloomington, Ind.