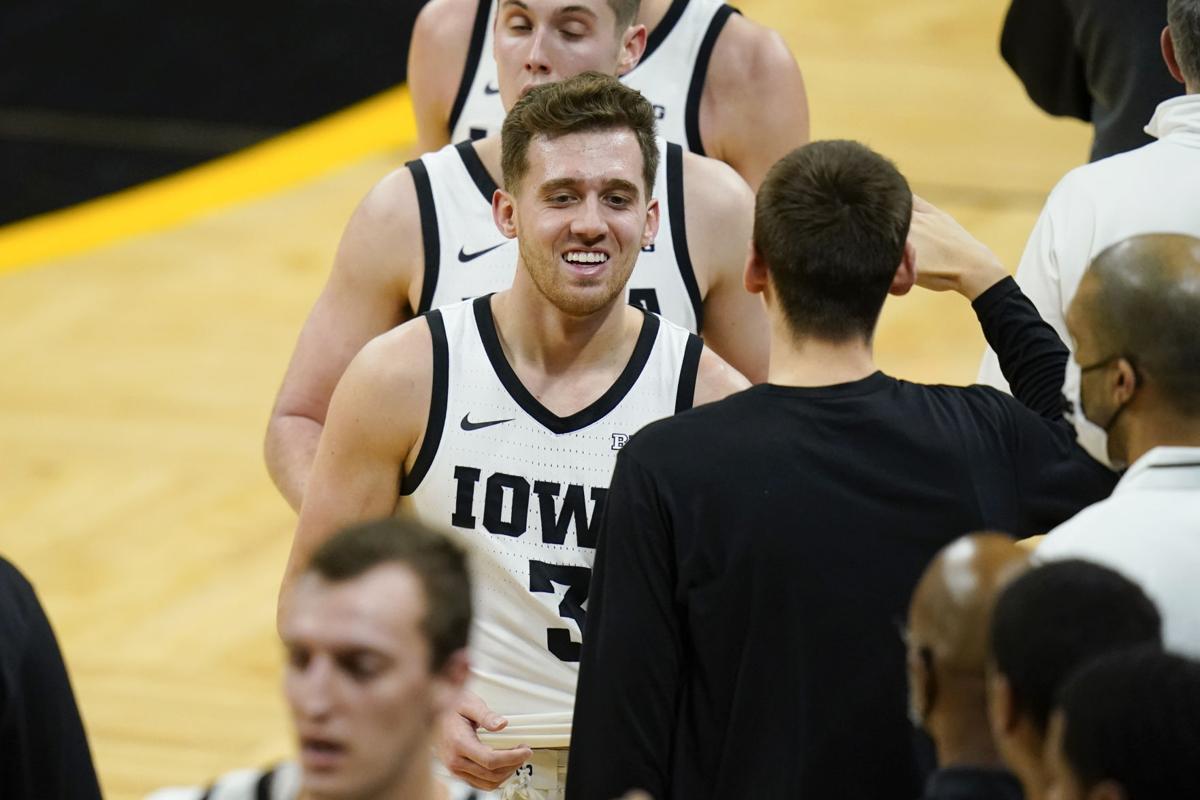 Iowa guard Jordan Bohannon celebrates with teammates after a Jan. 10 victory over Minnesota. 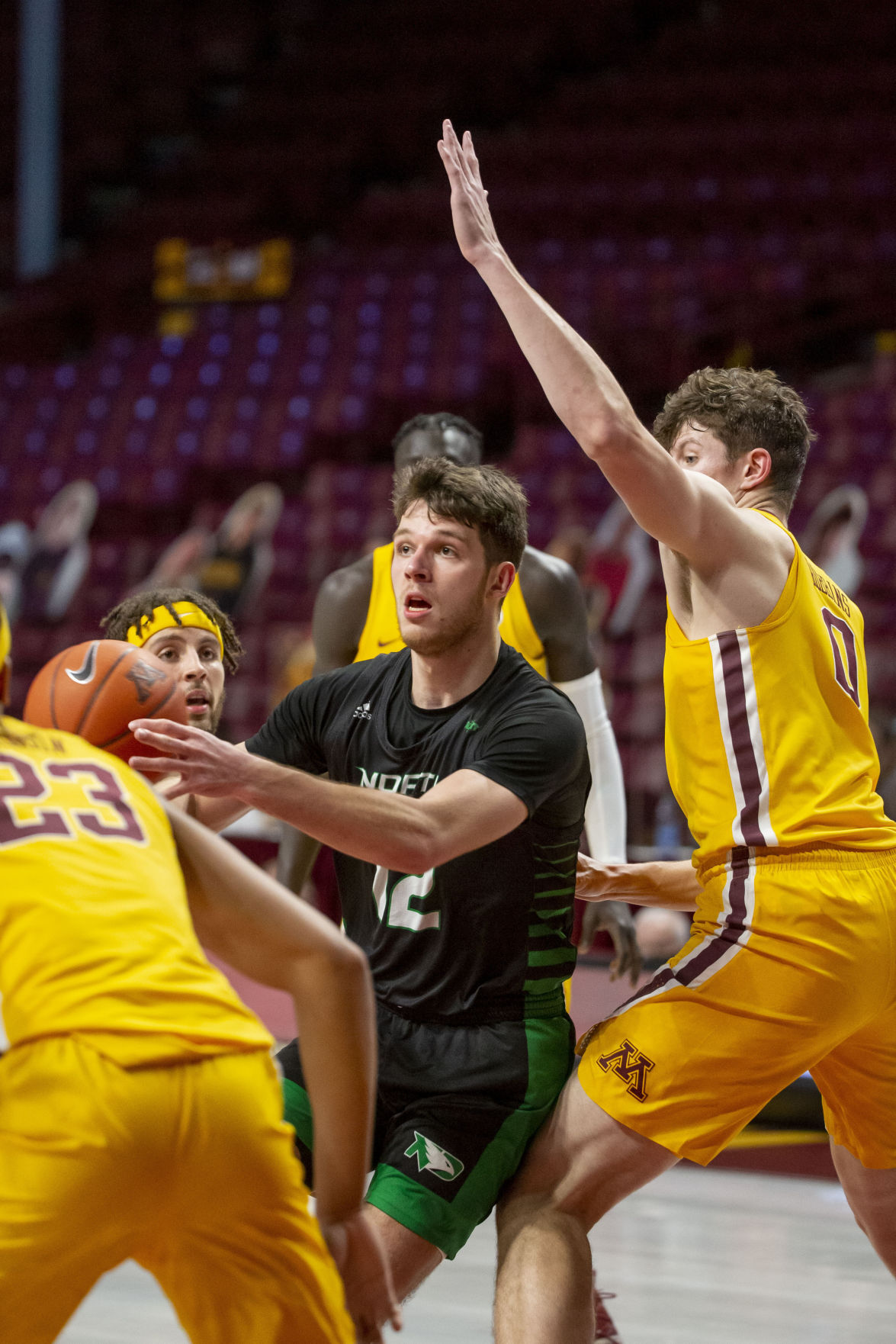 North Dakota forward Filip Rebraca (12) passes the ball as he moves past Minnesota center Liam Robbins (0) in the second half of a game last season. Rebraca has announced he is transferring to Iowa. 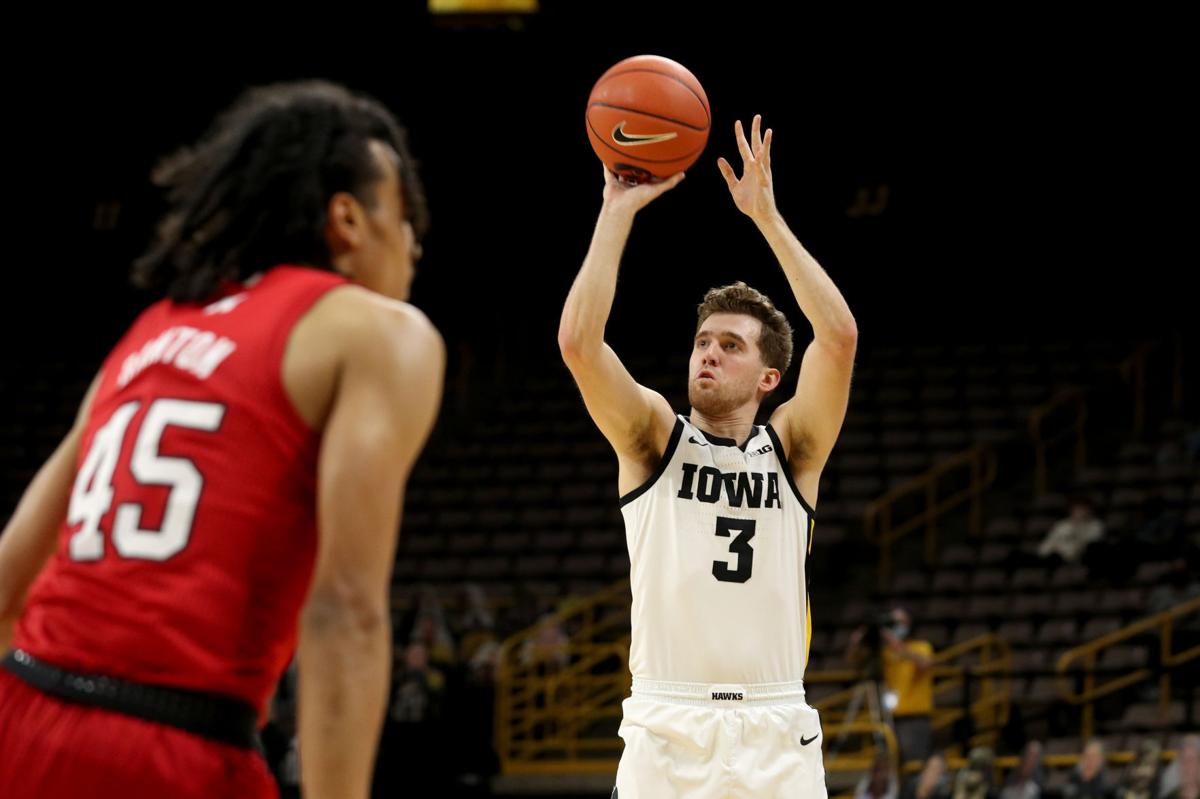 Iowa Hawkeyes guard Jordan Bohannon (3) knocks down a three point basket against the Nebraska Cornhuskers on Thursday at Carver-Hawkeye Arena.

The Iowa basketball program announced the signing of a new player Monday.

But perhaps more significantly, it revealed that it also will be retaining the services of one of its old players.

Record-setting guard Jordan Bohannon announced that he will be returning to play for the Hawkeyes for a sixth season, taking advantage of the NCAA’s ruling that the 2020-21 season did not count as a year of eligibility.

His decision came on the same day that University of North Dakota big man Filip Rebraca officially signed his letter of intent with the Hawkeyes.

He is second in Big Ten history in 3-pointers and needs just 11 more to pass former Ohio State star Jon Diebler as the conference’s career leader.

Bohannon, who fought back from two hip surgeries to play last season, had hinted recently that he might be open to returning for one more season.

He confirmed it Monday, saying “One final year’’ on Twitter. His post included a highlight video that concluded with “Let’s see what’s bout to happen.’’

“I am beyond excited to return to Iowa for my sixth year,” Bohannon said in a release issued by the university. “Last year never felt right with no fans in attendance. I look forward to providing leadership to the young guys this upcoming year and help them along the way of the incredible journey.”

“Having someone with his talent and experience on our roster will be invaluable to our guys,'' he said. "Jordan will bolster our backcourt and will be a team leader on and off the court.”

Rebraca announced last week that he had chosen Iowa over a list of suitors that included Big Ten rival Minnesota. His addition somewhat eases the loss of consensus national player of the year Luka Garza.

“The first thing that is so incredibly impressive is that Filip has a complete skill set for a big man,” McCaffery said.

“He is an athlete who understands how to impact the game in a variety of ways, is an excellent student, and is incredibly mature. He consistently produced at a high level, no matter who it was against. To get someone who has all those skills will blend very well with our players and program.”

The 6-foot-9 Rebraca, a native of Sombor, Serbia, started 74 of 87 games during his three years at North Dakota and averaged 16.8 points and 7.8 rebounds per game last season.

He was one of only two North Dakota players to collect more than 1,000 points and 500 rebounds in his first three seasons since the Fighting Hawks became a Division I program in 2008.

Rebraca said he was “ecstatic’’ to be coming to Iowa.

“Iowa is the best overall fit for me, from the coaches and players to the school and culture,’’ he said. “All the coaches were honest and welcoming. Coach McCaffery and his staff already have shown signs that they trust me and have my best interests in mind. As well as that, I want to play with great players and people.’’

Rebraca, who plans to complete his degree in economics from North Dakota this summer and enroll as a graduate student at Iowa in the fall, said he thinks he will have no problem fitting in with the Hawkeyes.

“The roster is filled with talented guys and sharing the court with them will be amazing,’ he added. “There is no doubt in my mind we will get along on and off the court. I want to be a part of this winning culture and see how I can help the program, my teammates, and coaches.”

Awards ceremony: Garza and the rest of the Iowa team will be honored Saturday in conjunction with the Hawkeye football team’s public workout at Kinnick Stadium.

Garza will be presented the Naismith Trophy as the national player of the year on the field following the football practice, at about 11:30 a.m., and is expected to speak to the crowd at that time.

The Hawkeyes will hold their awards celebration, including speeches by McCaffery and players, prior to that, from 9:45 to 11 a.m. Fans will be able to view that via Zoom at uiowa.zoom.us/j/94506975812.

Luka Garza bid one final, tearful farewell to the University of Iowa on Saturday as he formally accepted the Naismith Trophy as well as being named co-winner of the Chris Street Award.

With Luka Garza opting not to come back for another season and Jack Nunge transferring, Riley Mulvey saw his opportunity.

Bohannon hopes to thrive as leader of underdog team

There are certain things about the game of basketball that always have resonated with Jordan Bohannon.

Iowa guard Jordan Bohannon celebrates with teammates after a Jan. 10 victory over Minnesota.

North Dakota forward Filip Rebraca (12) passes the ball as he moves past Minnesota center Liam Robbins (0) in the second half of a game last season. Rebraca has announced he is transferring to Iowa.

Iowa Hawkeyes guard Jordan Bohannon (3) knocks down a three point basket against the Nebraska Cornhuskers on Thursday at Carver-Hawkeye Arena.