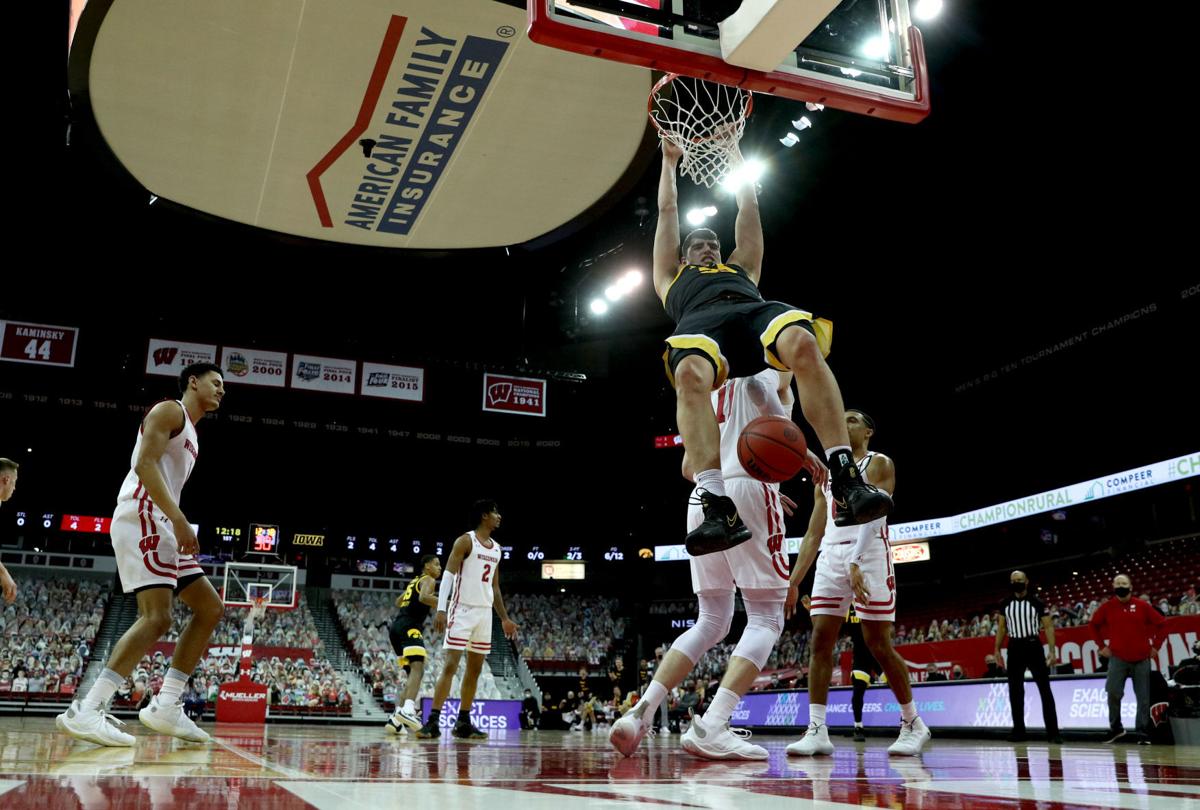 Iowa center Luka Garza (55) slams down two of the 30 points he scored Thursday against Wisconsin. 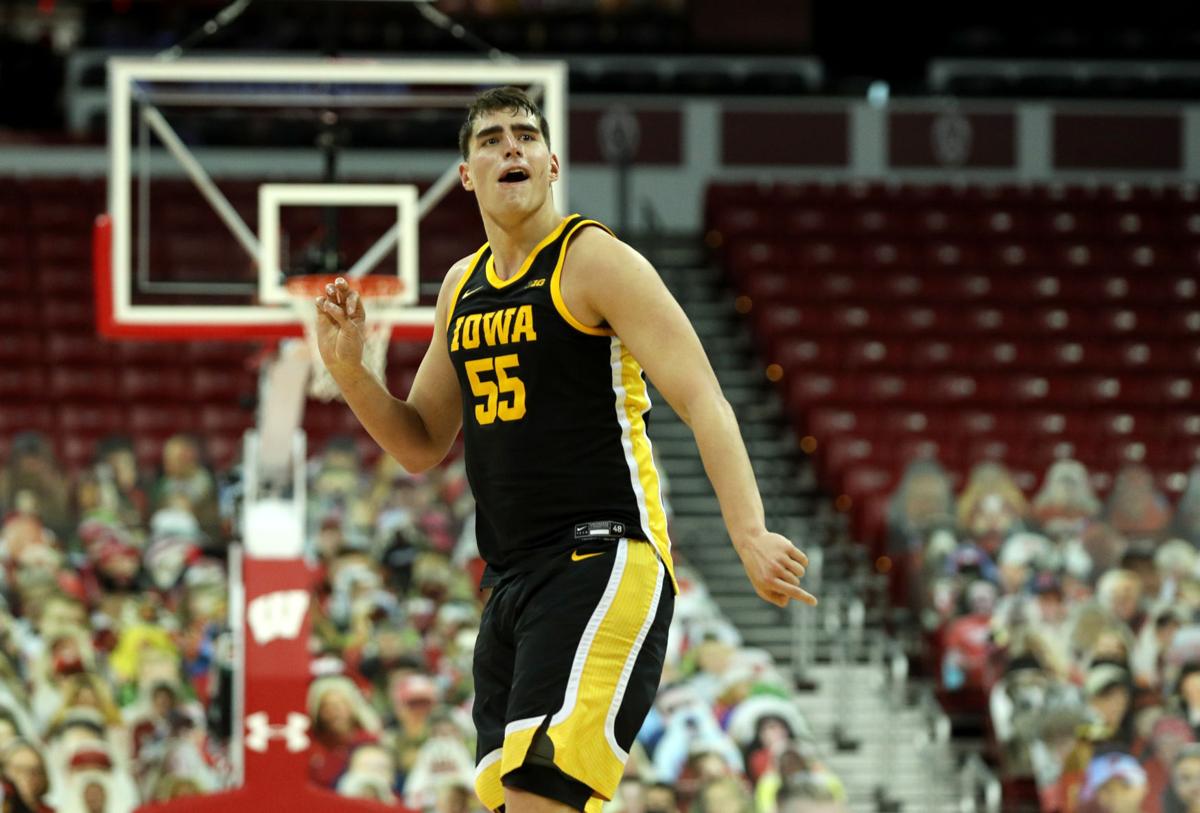 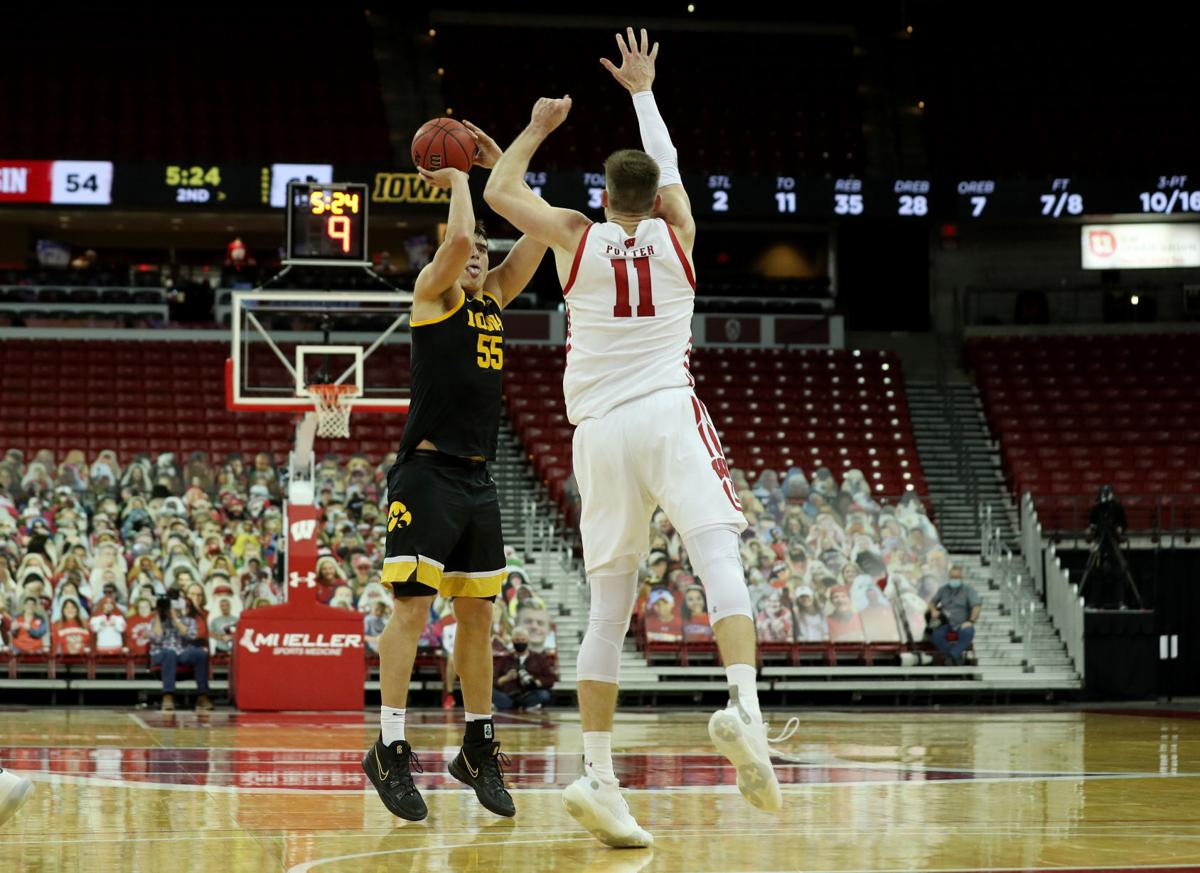 Iowa's Luka Garza (55) knocks down a 3-pointer over Wisconsin's Micah Potter on Thursday in Madison, Wis. Garza made four 3s in the game and scored 30 points.

Fran McCaffery is pretty sure that Roy Marble would be overjoyed right now.

Marble’s career scoring record at Iowa, which has stood for 32 years, is about to be eradicated. Senior center Luka Garza needs just 14 points Sunday against Penn State to bump Marble down to the No. 2 spot.

McCaffery, who got to be good friends with Marble when he first became the head coach at Iowa in 2010 and recruited Marble’s son, Devyn, said the current record-holder wouldn’t be at all disturbed that his record is about to fall because of who is going to break it.

"He would have appreciated Luka Garza in a number of different ways," McCaffery said. "They would have gotten to know each other and he would have loved the kid as a person and his character but then his work ethic and tenacity and consistency.

Marble, who piled up 2,116 points as an ultra-athletic wing player on Tom Davis’ high-scoring Iowa teams of the late 1980s, died of cancer in 2015.

Garza never got to meet him, but he knows a lot about him.

"I’m a guy who loves the game of basketball so wherever I’m at I want to know the history of who played there and the history of the Big Ten," Garza said. "So I knew who Roy Marble was in high school. I started to learn more about the best players in this program over time."

Marble could hit an occasional outside shot but he was at his best in transition and in the mid-range area, slashing and scoring with an almost Michael Jordan-esque style, using his God-given athleticism to hang in the air for short jumpers or to throw down spectacular dunks.

Garza is a hulking 6-foot-11 center who has worked tirelessly to improve his game. He is more comfortable in the low post, using fantastic footwork to maneuver for points while also stepping outside to make 3-pointers. He drained four of them in a 30-point effort against Wisconsin on Thursday and is shooting 45.1% from behind the arc.

Garza said he didn’t have any inkling he could supplant Marble at the top of the list when he first came to Iowa.

"I never said I wanted to get that record," he said. "Over time, I think things just kind of took care of itself and I’m in this position now. It would be a tremendous honor to be able to be talked about in the same sentence as him. It definitely is really cool."

He already has beaten one of Marble’s school records. He passed him as the Hawkeyes’ career leader in field goals made while scoring 30 points in that 77-62 victory over Wisconsin. In addition to topping his record for most points, he also should quickly pass him in career field goal attempts. He needs only 15 shots to do that.

Garza has done his best to downplay all of this, preferring to focus on what the Hawkeyes are doing as a team.

After a rough mid-season patch, they have strung together three straight wins by double-digit margins to improve to 16-6. They have a chance to further cement a top-four seed in the Big Ten tournament with a victory over the Nittany Lions on Sunday.

He said he has tried to put the impending record out of his mind.

"Obviously, I know what an honor it would be to get that record …," he said after the Wisconsin game. "I try not to think about it. I don’t want to psych myself out. I’m just trying to play basketball."

You get the feeling his coaches and teammates are more excited about what might happen Sunday as much or more than Garza is.

"As a teammate and as a friend, I’ll be extremely happy for him," said Connor McCaffery, who arrived at Iowa in the same recruiting class as Garza. "It’s something he obviously has earned. … For me, it’s just fun to play with him. He’s one of my better friends on the team and seeing him reach this milestone is something I’m excited and I’m happy for him."

Connor said it’s just too bad that Garza will have so few friends and family members present to see it because of the COVID-19 pandemic.

"Either way, it’s going to be an extremely special moment and something we’ll all remember forever," he said.

Iowa center Luka Garza (55) slams down two of the 30 points he scored Thursday against Wisconsin.

Iowa's Luka Garza (55) knocks down a 3-pointer over Wisconsin's Micah Potter on Thursday in Madison, Wis. Garza made four 3s in the game and scored 30 points.