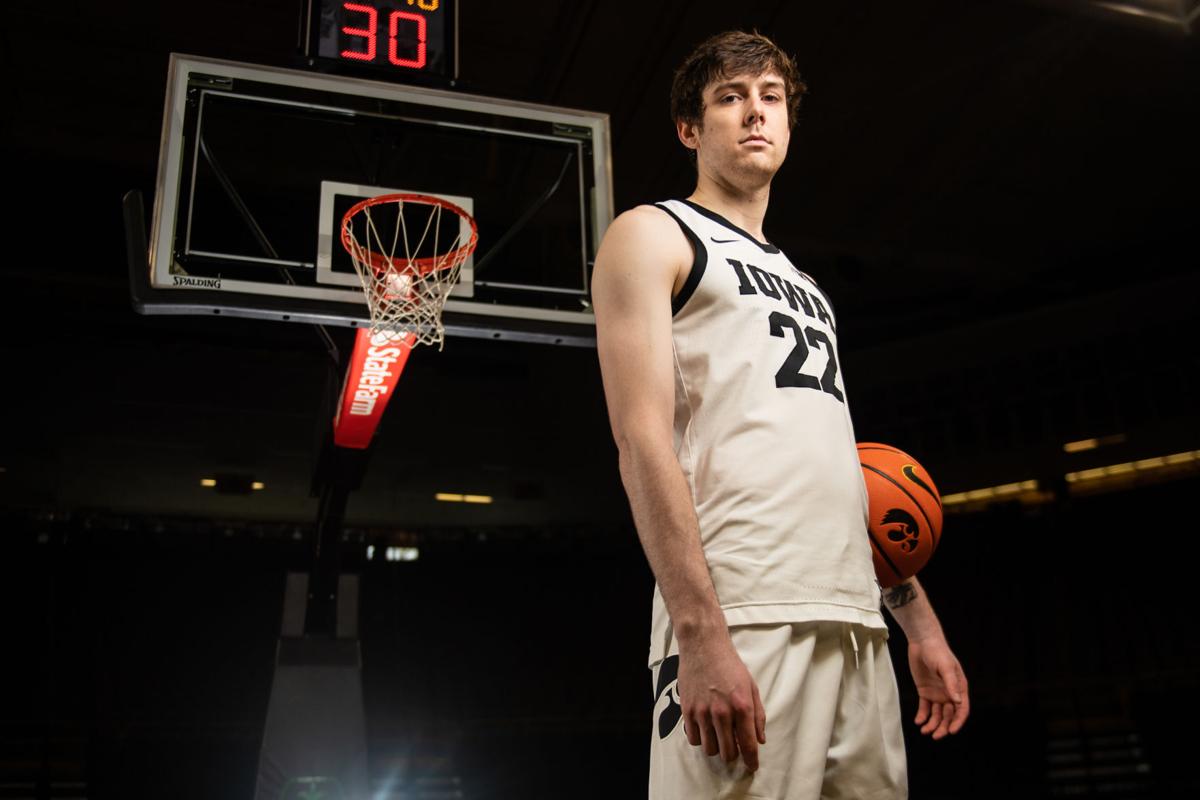 University of Iowa forward Patrick McCaffery (22) poses for a photo during the Hawkeyes’ men's basketball media day on Monday at Carver Hawkeye Arena in Iowa City. 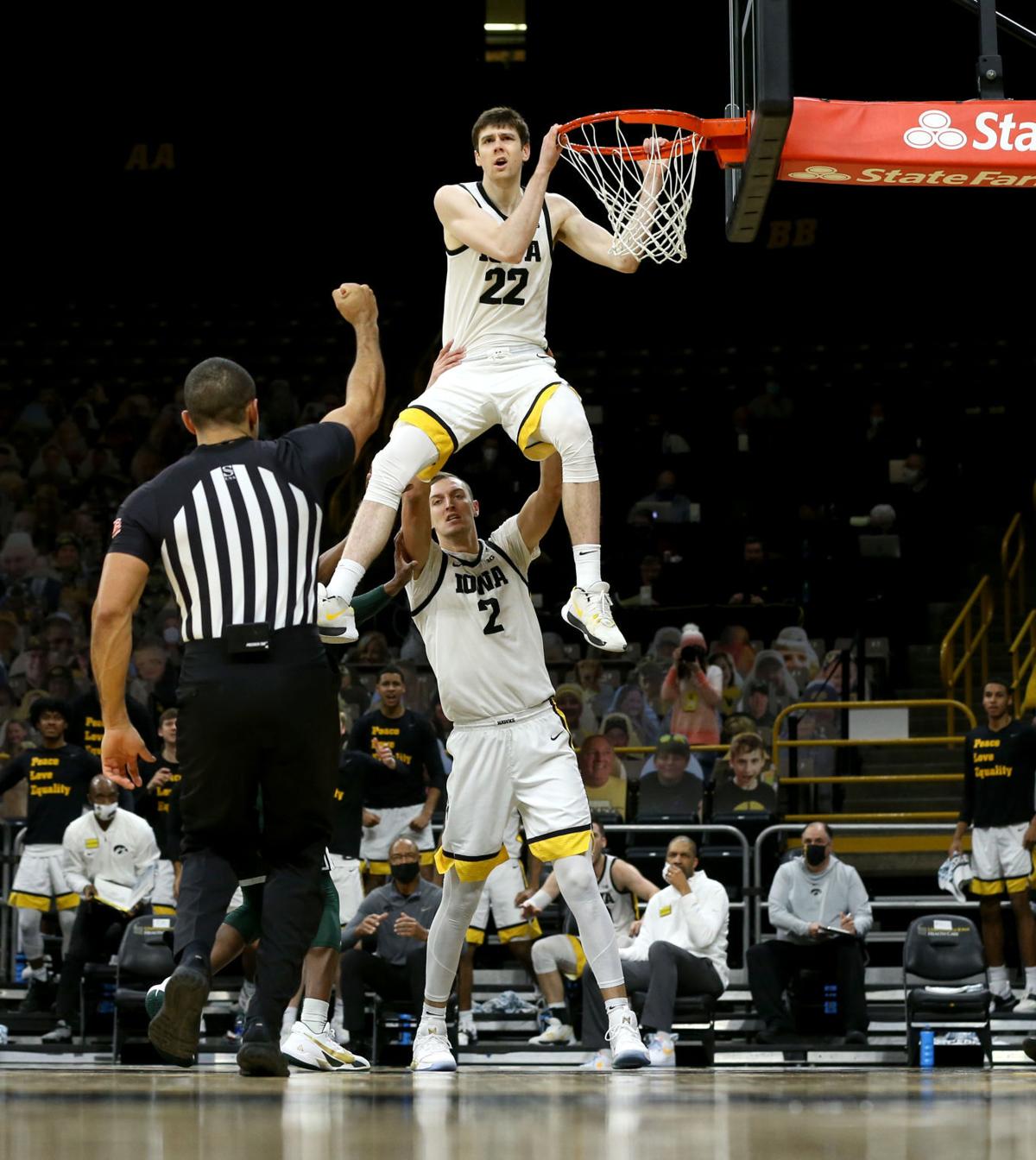 Iowa forward Patrick McCaffery (22) gets a breakaway dunk against Michigan State during a game last season. The 6-foot-9 sophomore has been hobbled by ankle injuries for more than a month.

IOWA CITY — University of Iowa men's basketball coach Fran McCaffery was just saying at his team’s preseason media day Monday what a great atmosphere it was for prospective recruits at Saturday’s thrilling football game between the Hawkeyes and Penn State.

Before the day was over, he reaped the benefits of it.

Illinois high school center Owen Freeman, who was among the recruits who made an official visit over the weekend, announced later Monday that he plans to accept a scholarship offer and play his college basketball at Iowa.

The 6-foot-10, 220-pound Freeman, who is entering his junior season at Bradley-Bourbonnais High School near Kankakee, is the first commitment for the Hawkeyes in the 2023 recruiting class. They have two commitments from players in the 2022 class: Guards Josh Dix and Dasante Bowen.

Freeman had scholarship offers from at least seven other Big Ten Conference schools — Illinois, Michigan State, Ohio State, Indiana, Purdue, Wisconsin and Northwestern — as well as Notre Dame, Marquette and Butler. He visited Wisconsin last week and also had made visits to Illinois and Northwestern.

“The atmosphere was phenomenal,’’ he said of the game, which ended with a 23-20 Iowa victory and fans rushing the field in celebration.

“They all ran on the field with everybody else,’’ he said of the recruits. “They just had a lot of fun. That's what you want. You want it to be a very informative weekend. They're here with their parents. Watch practice. See the campus. Have meetings with various people. But then go have some fun and see what the campus life is like. And they got to enjoy that.’’

Patrick hobbled: McCaffery said he still has yet to have his entire team together and healthy for a practice.

Most recently, his son Patrick, who is a contender to replace Joe Wieskamp as the starting small forward, has been sidelined by ankle problems.

“He had a great summer, but he's had ankle issues since we started,’’ Coach McCaffery said. “He sprained one, then sprained the other. He has been limited for about four or five weeks. So we need to get him back out there.’’

Connor progressing: McCaffery’s other son, Connor, has been practicing but admitted he still might not be 100% after undergoing surgery on both hips last spring.

“I’m pretty close,’’ Connor said. “There may be some days where there is some soreness lingering, but for the most part I’m fine.’’

He said he expects to be fully healthy by the time the Hawkeyes host Slippery Rock in a preseason exhibition game on Nov. 5.

Hitting the weights: Connor McCaffery noted that adding strength has been a major point of emphasis for some of the younger players in the Iowa program during the off-season.

Keegan and Kris Murray, Patrick McCaffery, Josh Ogundele, Tony Perkins, Joe Toussaint and Ahron Ulis all appear to have added a great deal of muscle in the weightroom since the end of last season.

“Kris and Keegan, they look a lot different,’’ Connor said. “Patrick has really been putting an emphasis on it. Josh has done a lot of work in the weight room. And Tony, Joe T. and AU are all great athletes, strong, quick powerful, all of the above. They didn’t really need it but they continue to do it. They’ve obviously changed their bodies even though they didn’t need to.’’

University of Iowa forward Patrick McCaffery (22) poses for a photo during the Hawkeyes’ men's basketball media day on Monday at Carver Hawkeye Arena in Iowa City.

Iowa forward Patrick McCaffery (22) gets a breakaway dunk against Michigan State during a game last season. The 6-foot-9 sophomore has been hobbled by ankle injuries for more than a month.