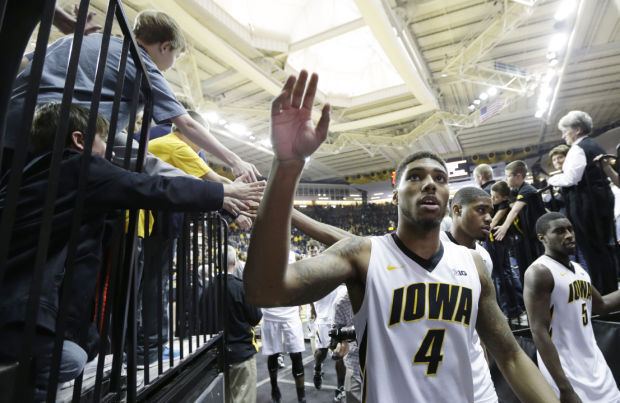 Iowa guard Devyn Marble waves to fans after a 2014 game against Michigan. Marble lashed out at Iowa on Monday for what he considered to be disrespect toward his late father and his legacy with the Hawkeyes. 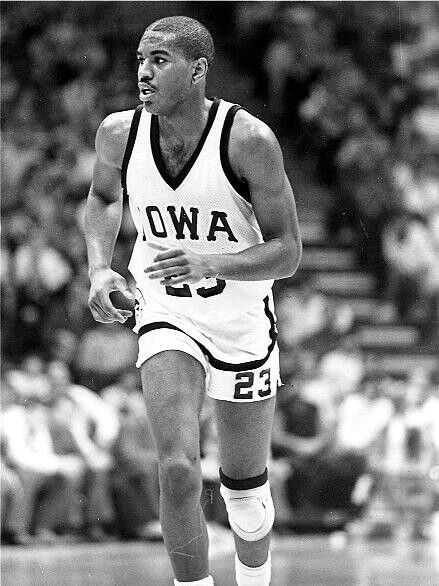 Roy Marble scored 2,116 points during his Iowa career from 1985 through 1989. His school record recently was broken by senior center Luka Garza.

Following Iowa’s final regular-season game Sunday, it was announced that senior Luka Garza would have his number retired.

The news that his number would be retired was greeted warmly in most circles. But not with the Marble family.

Devyn Marble, who followed his father to Iowa and also had a stellar career playing for current head coach Fran McCaffery from 2010-14, lashed out at the university on social media Monday night.

"I’ll never watch another Iowa game in my life with the amount of disrespect that school has shown me and my family," Devyn wrote on Twitter. "Love the fans but I’m in no way affiliated or connected to the university."

McCaffery and Iowa director of athletics Gary Barta did what they could to calm the situation Tuesday.

"I just want to share absolutely that disrespect was unintentional and to publicly apologize for that," Barta said.

McCaffery said he had spoken directly to some members of the Marble family and apologized, but he had not yet reached Devyn.

"I know that Dev knows I love him and I loved his dad," McCaffery said. "We became very close. I really appreciate Mr. Barta's comments and sensitivity toward the situation. In no way were we playing Luka in any way to disrespect anyone else, least of all anybody named Marble."

McCaffery said he ordinarily wouldn’t even get involved in this type of situation but he felt compelled to do so this time. He pointed out that Roy Marble is the only other Iowa player besides Garza to score 2,000 points in a career and that he was part of the winningest team in Iowa history.

"I don't think you have to stretch that far to understand what his performance and his accomplishments meant to our program and its history, in particular with his son coming here and having the spectacular career he had," McCaffery said.

Barta said plans have been in the works for a long time to recognize Marble and other great Iowa players from the past along the concourse at Carver-Hawkeye Arena.

He said the renovations of the concourse have been delayed for a variety of reasons but that he planned to hold meetings this summer to discuss how to move forward with that plan.

"I'm confident in (Barta's) ability with the other folks that he referenced to move forward and recognize Roy properly," McCaffery added.

Luka Garza bid one final, tearful farewell to the University of Iowa on Saturday as he formally accepted the Naismith Trophy as well as being named co-winner of the Chris Street Award.

With Luka Garza opting not to come back for another season and Jack Nunge transferring, Riley Mulvey saw his opportunity.

Bohannon hopes to thrive as leader of underdog team

There are certain things about the game of basketball that always have resonated with Jordan Bohannon.

The Iowa basketball program announced the signing of a new player Monday.

Iowa guard Devyn Marble waves to fans after a 2014 game against Michigan. Marble lashed out at Iowa on Monday for what he considered to be disrespect toward his late father and his legacy with the Hawkeyes.

Roy Marble scored 2,116 points during his Iowa career from 1985 through 1989. His school record recently was broken by senior center Luka Garza.