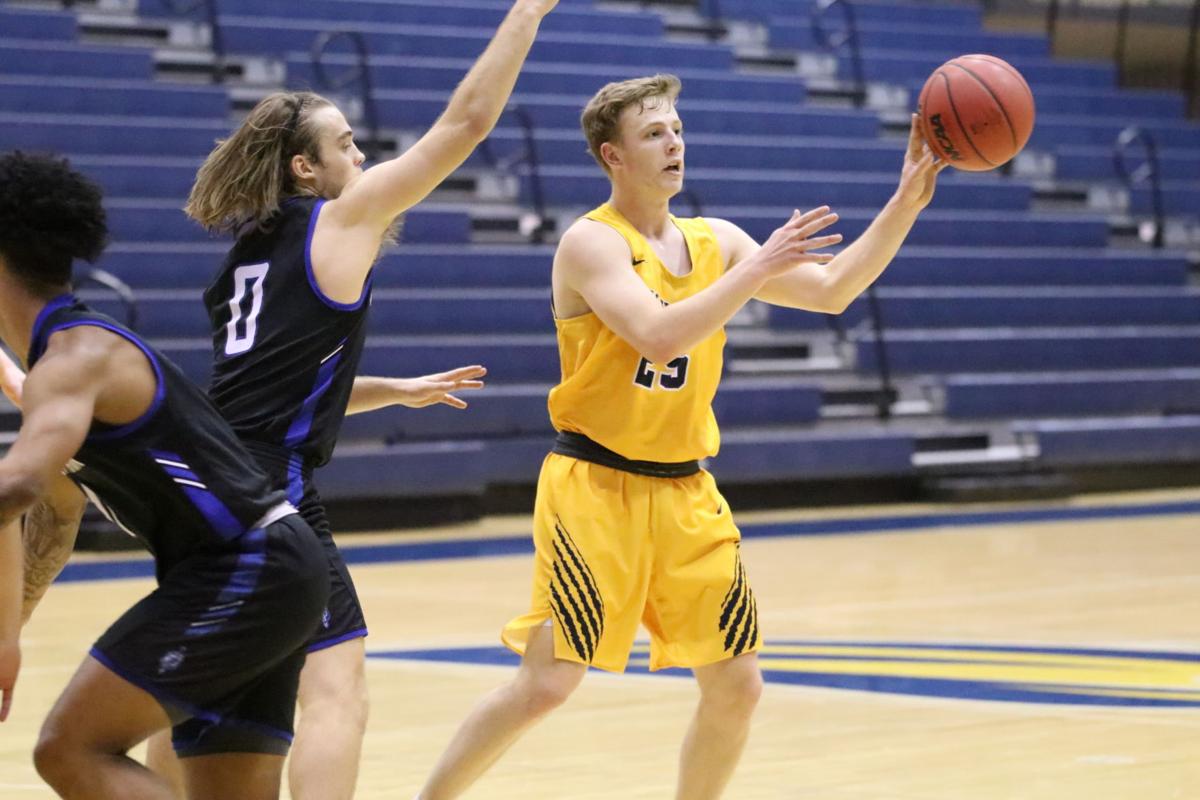 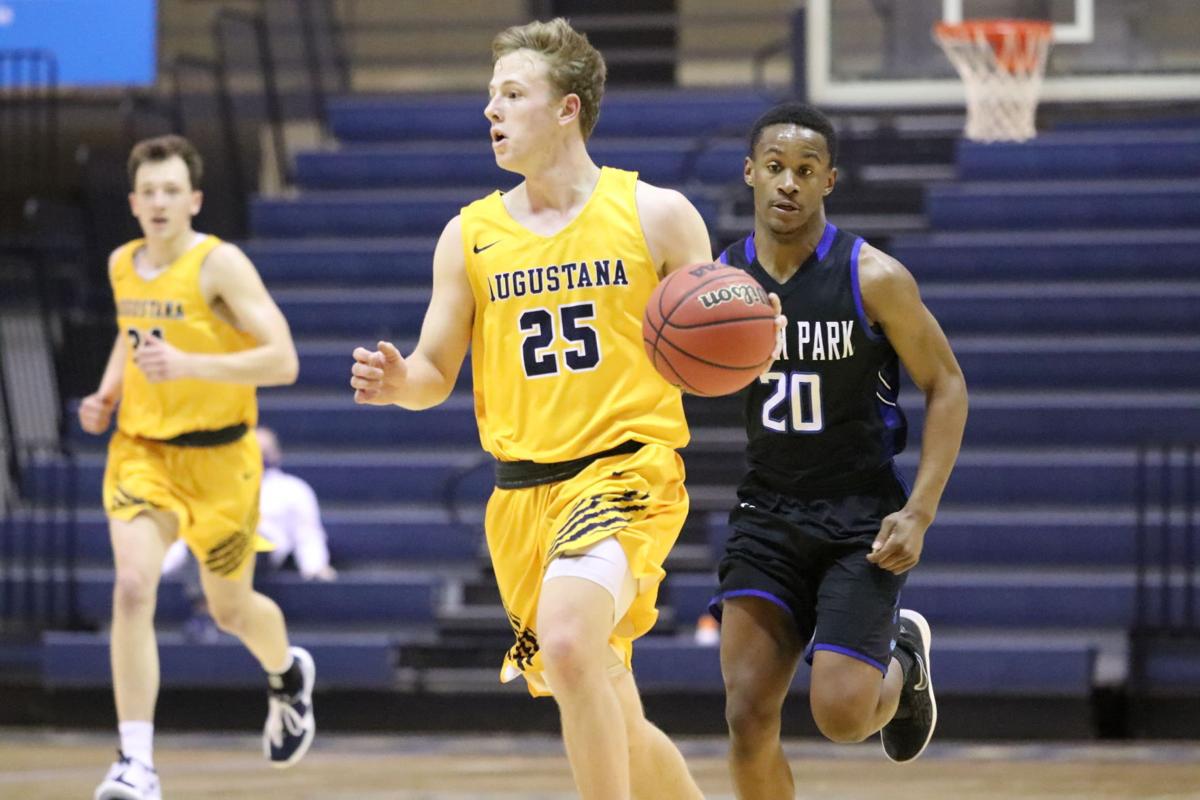 Augustana junior guard Luke Johnson dribbles the ball up-court during Augie's 74-71 CCIW victory over North Park on Saturday afternoon at the Carver Center. Johnson finished with 14 points and four assists in the win. 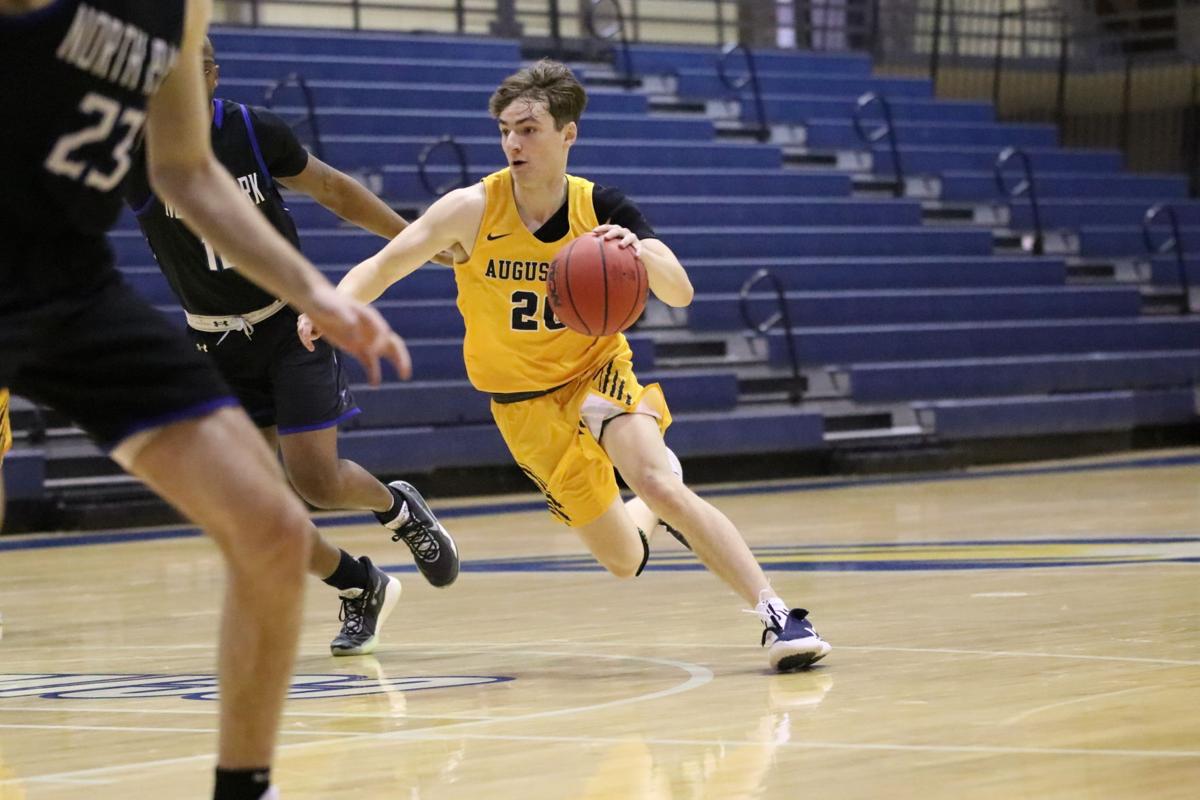 Luke Johnson helped kick-start a strong second half for the Augustana College men’s basketball team Saturday afternoon and was there at the end for the Vikings as well.

With two slick plays in the final 72 seconds of play, Johnson helped Augie hold off the North Park Vikings 74-71 for the second straight harrowing victory over their fellow Vikings in three days. Augie rallied on Thursday for an 80-75 victory in Chicago.

This time was much different as Augie needed to figure out a way to nurse a lead to the finish line, and that turned into an exciting adventure as Augustana, now 5-2 overall and in CCIW play, logged its fifth straight win.

“We’ve been able to find a way to close games out when we are down,” said first-year Viking coach Steve Schafer. “Three of our last four games we’ve been down by double-digits and then crawled our way back. This is the first time — other than Millikin at home when we had a lead — we had a lead late in the game.

“And this team is still learning how to win, and today was a great example of us not being there yet. … But we found a way.”

Holding a 69-67 lead, Matt Hanushewsky missed the front end of a one-and-bonus situation that could have given the hosts a little breathing room. A long rebound was gathered by Daniel Carr. Out of an Augie timeout, Johnson found Carr on a slip down the lane and hit him with a perfect feed for a layup and a 71-67 lead with 1:12 left in regulation.

NPU answered with a Jordan Boyd (18 points) bucket with :59 left.

Working its motion offense, Johnson, who finished with 14 points and 4 assists, ended up with the ball in his hands again and this time drove to the hoop for Augie’s final field goal with :35 showing and a 73-69 advantage.

After each team turned over the ball, Augie had a chance to ice the game from the line with :05.1 left. However, sophomore Carter Duwa — who had an exceptional outing with a game-high 25 points — split a one-and-bonus.

NPU grabbed the rebound and got the ball to Mike Osborne (13 points), who launched a 30-footer than rattled off the rim as the buzzer sounded.

“It was getting close at the end, but we stayed together,” said Johnson of getting the win. “We’ve got a lot of young guys and I think we’ve been doubted a little bit, but we never give up.”

This team has found a game-changing spurt in just about every game. Saturday, after a horrible first half in which it committed 14 turnovers, Augie turned the game early in the second half with some tremendous shooting to start the final 20 minutes.

Osborne scored the first bucket of the half to give the guests a 35-30 lead.

Augie answered with a 19-2 run that included seven straight made baskets. That spree started with Johnson hitting two 3-pointers and Duwa hitting a bomb and a nice pull-up jumper in the paint that gave Augie a 41-35 lead, its first advantage since 25-24 before NPU scored seven straight.

Augie’s onslaught continued as it made eight straight shots before a miss, opening the second half on 9-of-11 shooting, including 6-for-6 from beyond the arc.

“First half, we were focusing on defense and playing pretty good defense and we struggled offensively taking quick shots,” said Johnson. “After halftime, we got the ball moving, attacked the basket and that opened up the 3s.”

The contest came down to those two key plays late by Johnson.

"I’m usually pretty calm with the ball and collected,” said Johnson, who has played more shooting guard than point guard in his Augie career after being a prep point guard. “I was able to find my teammates, and they did a great job getting open.”

Carr had that late bucket to close out a 10-point, 11-rebound effort despite being the focus of NPU’s defense.

NPU 82, Augie 55 (women): The Augustana women were looking for a bounce-back victory over North Park on Saturday in Chicago, but that attempt was foiled.

Augie trailed 6-4, but got stuck on that number as the hosts rattled off 12 straight points to build a double-digit lead that Augie never could erase in a what turned out to be an 82-55 CCIW setback.

On its home floor, NPU (6-3, 6-3 CCIW) led 30-8 after the first quarter and cruised from there. It gave North Park the series sweep after logging a 66-52 victory in Rock Island on Thursday.

Another former Rock, Lauren Hall, led the Vikings with six rebounds to go with five points.

NPU had five players in double-digit scoring, led by Sinead Molloy and Chantel Hairston, who had 14 each.

Augustana junior guard Luke Johnson dribbles the ball up-court during Augie's 74-71 CCIW victory over North Park on Saturday afternoon at the Carver Center. Johnson finished with 14 points and four assists in the win.