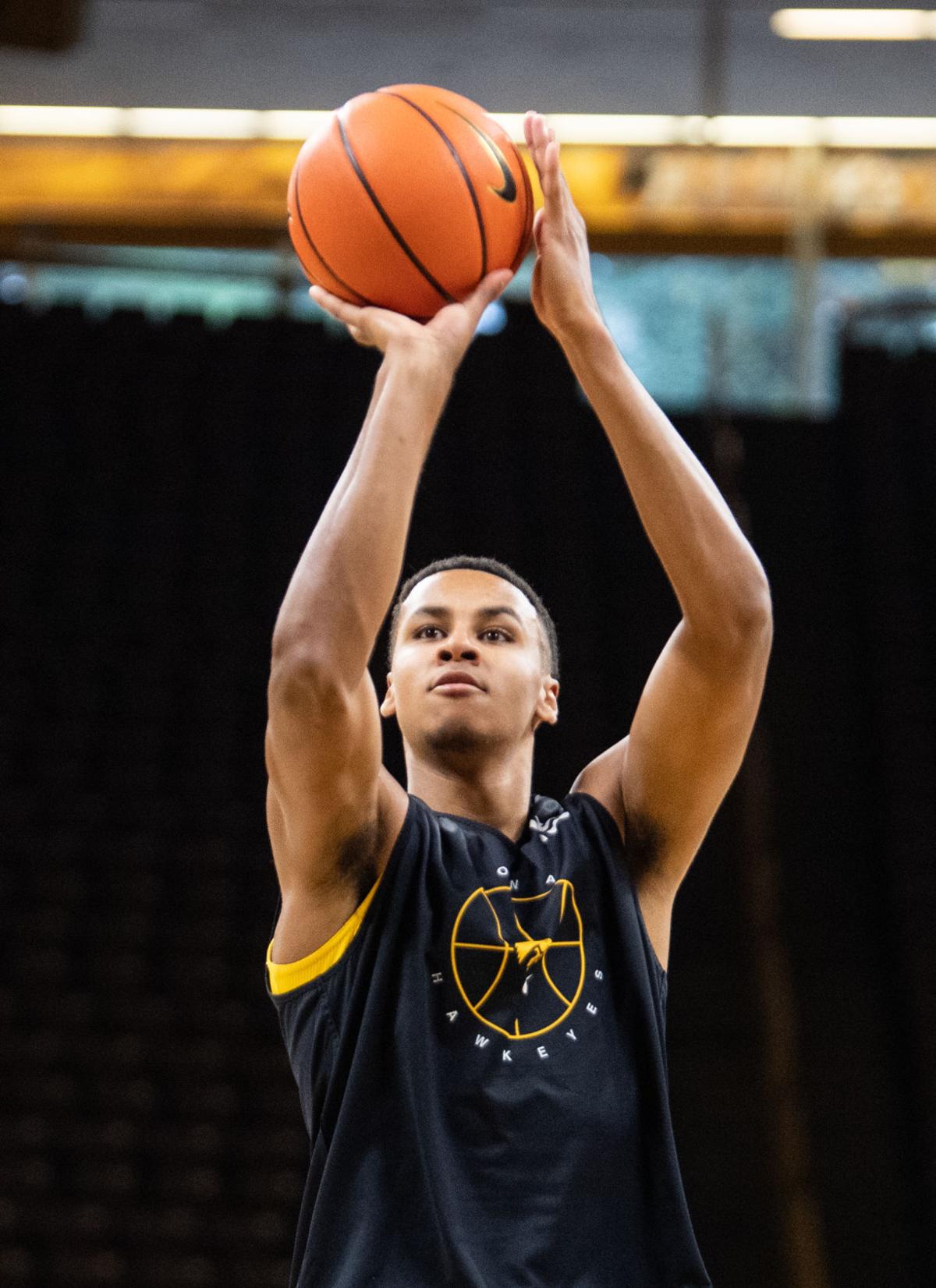 University of Iowa forward Keegan Murray (15), shown during Monday's media day festivities at Carver Hawkeye Arena, has set himself up for a potentially big season. The Hawkeyes will need him to step and fill the void left by the graduation of Luka Garza. 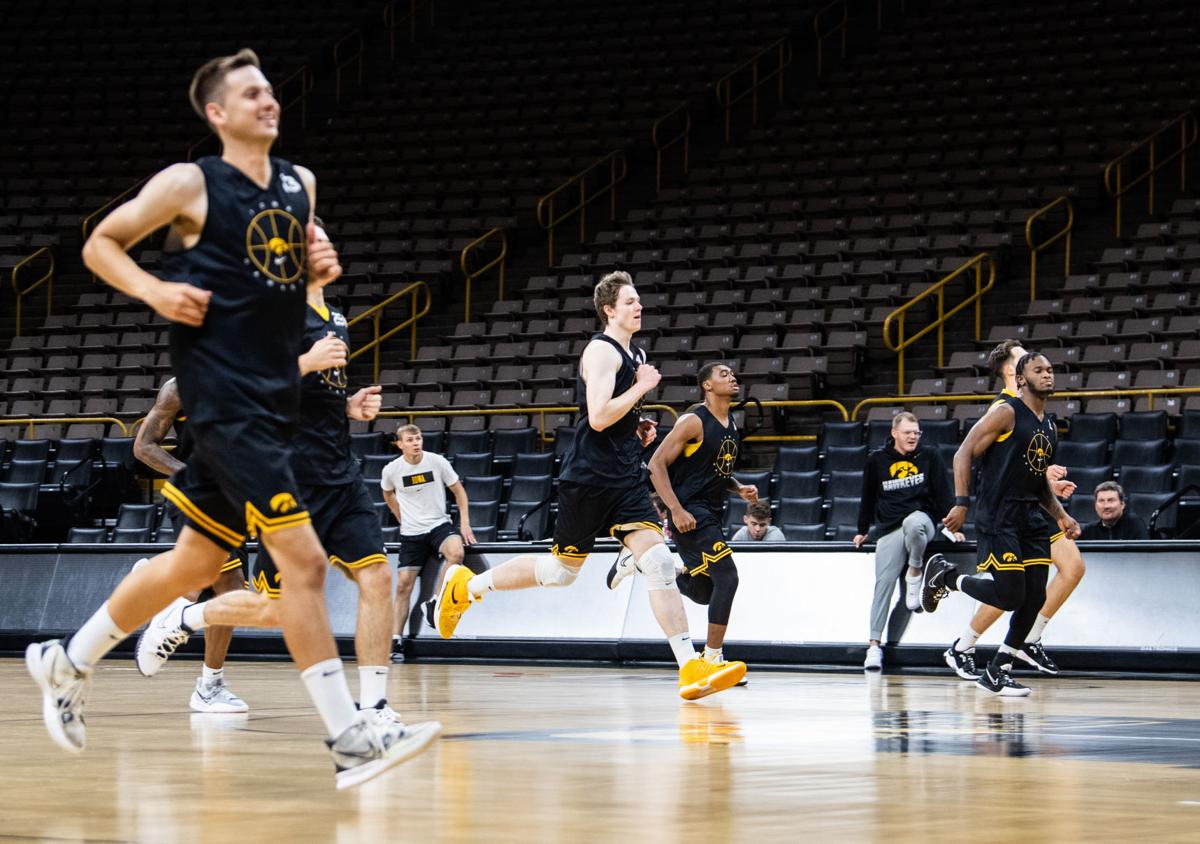 A young basketball player comes out of high school with almost no recruiting attention from Division I schools, goes off to prep school for a year, raises some eyebrows by signing a letter of intent with a Big Ten Conference school, then a year later is considered by most experts to be a future No. 1 NBA draft choice.

As members of the University of Iowa basketball team met reporters Monday at the team’s preseason media day, Murray looms as the face of the program, the coming star on a team that last season produced a player who won nearly every national player of the year award.

“I’d say that’s a remarkable story to believe,’’ Murray said. “I’d say it’s just a lot of hard work that a person put in, just knowing what they had to do day in and day out. It’s something that is accomplishable for anyone. If you put your mind to it, you can do whatever you want to do.’’

Murray made the Big Ten’s all-freshman team while starting only four games last season and he has made big strides since then. He has grown from being 6-foot-8 and 205 pounds to being 6-9, 225 while increasing his speed and vertical leap.

He regularly shows up on lists of leading prospects for the 2022 NBA draft. He recently made a list of 20 players to watch for the coming season.

It’s a big jump for a kid who had one scholarship offer — from Western Illinois — coming out of Cedar Rapids Prairie in 2019 and who wasn’t ranked among the top 350 recruits in the country even after a year at DME Academy in Daytona Beach, Fla.

But Iowa coach Fran McCaffery said Murray is more than ready to be the lead dog for a team that lost Luka Garza and Joe Wieskamp to the NBA and C.J. Fredrick and Jack Nunge to the transfer portal.

“He's ready. He's a confident kid,’’ McCaffery said. “He stays within himself. Nothing seems to really rattle him at all. Very focused. He works hard in the offseason. He never tries to do the things that he can't do on the floor. I mean, he certainly has the talent to be a guy that could do that, just completely try to do everything in every possession.

“But he really has a keen understanding of how to play. If there's space, he goes. If there's not, he moves it. He's equally effective with the ball, without the ball, in the post, on the perimeter. Probably best in transition. I think the more space he has, the better he'll always be.’’

McCaffery said he also expects Murray to be a better perimeter shooter than he showed at times last season, when he averaged 7.2 points and 5.1 rebounds per game but made less than 30% of his 3-point attempts.

“I’ve been a good shooter my whole life,’’ Murray said. “It was just a confidence thing with me last year. This year I have all the confidence in the world.’’

And both he and McCaffery also expect the 21-year-old sophomore to be more vocal as a leader than he was last year when he typically deferred to Garza, Wieskamp, Jordan Bohannon and Connor McCaffery.

Bohannon, who is making the switch from point guard to shooting guard, and Connor McCaffery are still around.

But Murray’s voice will be heard, too.

“I want to be more of a leader on this team so I’ve increased my talking …’’ Murray said. “I’ve had a lot more experience in the Big Ten than most people so if I can use my talking to help the younger guys, help the new guys any way I can, that’s been my focus.’’

Coach McCaffery said Murray will be a leader just by doing what he does.

“He's a guy that plays hard. He plays smart. He plays well,’’ McCaffery said. “So that guy is going to have credibility whenever he opens his mouth. I've encouraged him to do that because his teammates will respect that because they respect him.’’

Murray said the fact that he now is one of the marquee players doesn’t really impact how he plays or views the game.

“Just having a bigger target on my back doesn’t really affect anything for me,’’ he said. “My effort and energy will always be there. If I can change the game that way, that’s what I’ll do.’’

Murray won’t be expected to carry as large a load as Garza often did in the past.

McCaffery talks about this being perhaps the deepest team he ever has had. Keegan isn’t even his only Murray.

Twin brother Kris Murray, who played 41 minutes while his brother was emerging as a star last winter, figures to also play a major role.

“Kris is going to be a major factor on this team and he needs to be …’’ Coach McCaffery said. “He just needs some time to gain his confidence by getting out there and performing the way he's capable in games. But that's going to happen for him.’’

“I will not be known as Keegan’s brother this year,’’ Kris Murray vowed.

“We've got a lot of guys who are good,’’ said Coach McCaffery, who said his starting lineup currently is "fluid.''

"The practices have been very competitive. I've been switching the lineups quite a bit. Everything we do in practice is competitive.''

Even though he has 10 players returning from last season, he said he thinks it’s the first team he has coached where every player will fill a different role than he did the previous year.

It’s also a team full of players who feel they have something to prove, in part because most experts are picking them to finish ninth or lower in the Big Ten standings.

“I don’t think people’s expectations of us are too high …’’ Patrick McCaffery said.

It has created one of those Us-against-the-world mentalities that coaches love.

“We have something to prove,’’ Kris Murray said. “It’s a different team but we have the same expectations and we’re going to hold each other to that. We have new leaders but we’re all ready and we’re all hungry.’’

University of Iowa forward Keegan Murray (15), shown during Monday's media day festivities at Carver Hawkeye Arena, has set himself up for a potentially big season. The Hawkeyes will need him to step and fill the void left by the graduation of Luka Garza.