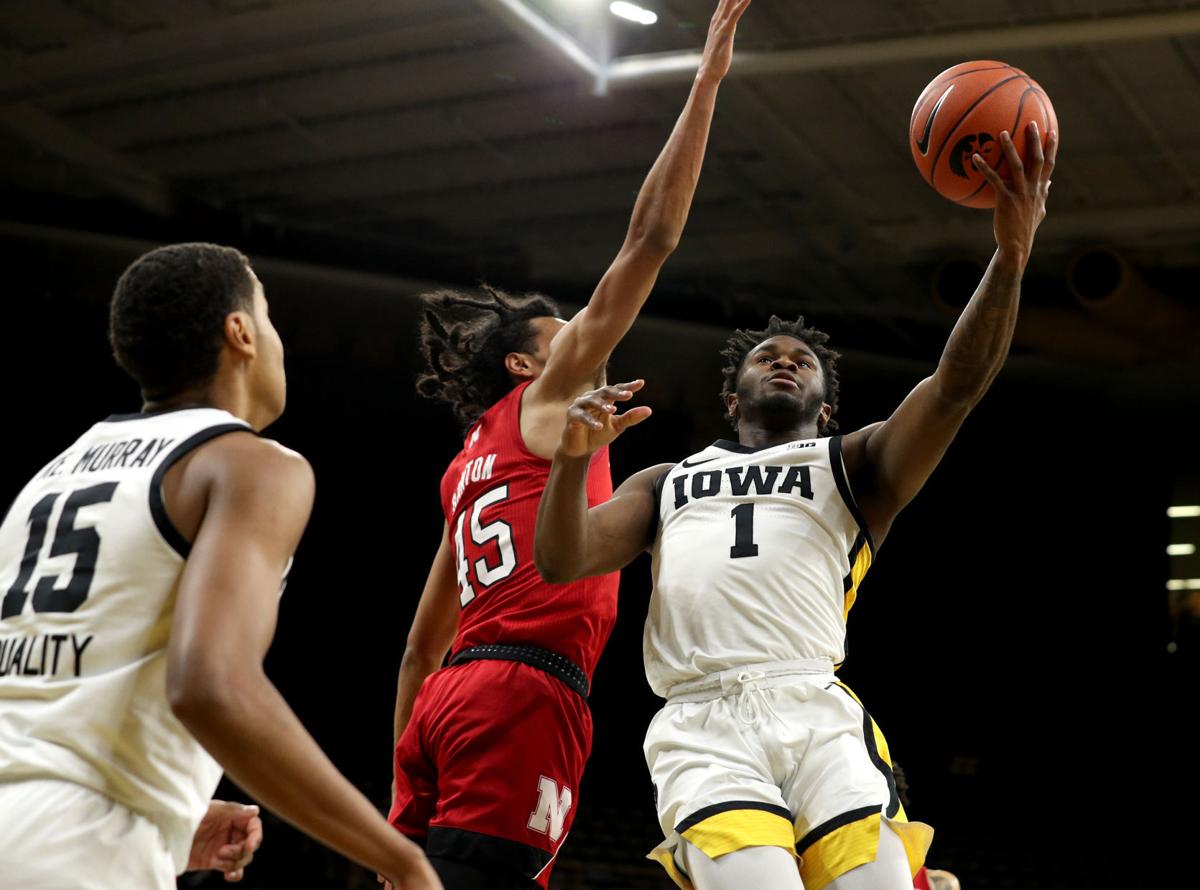 Iowa guard Joe Toussaint (1) goes to the hoop against Nebraska during a game last season. 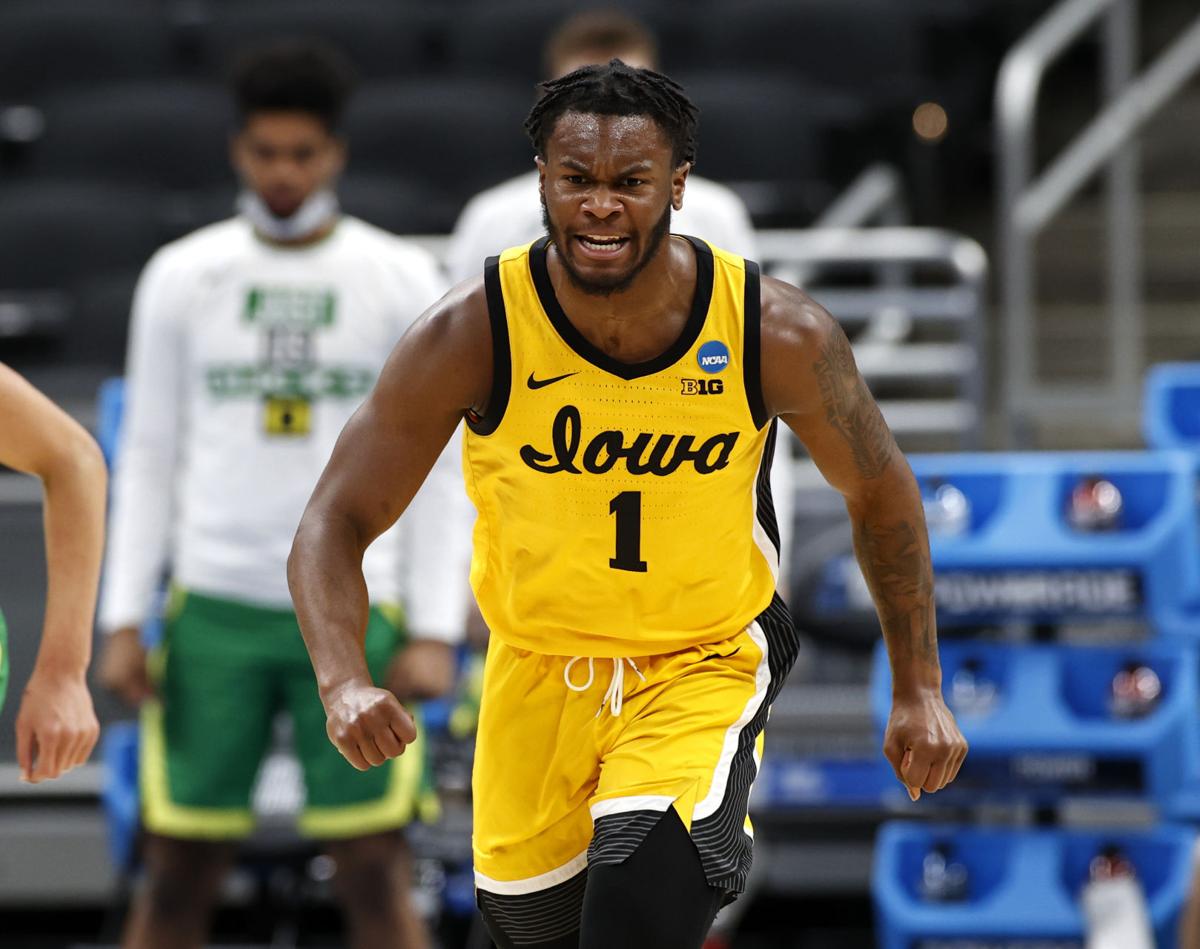 Iowa guard Joe Toussaint is pumped up during the first half of the Hawkeyes' game against Oregon in the second round of the NCAA tournament last season.

IOWA CITY — When Joe Toussaint first heard that Jordan Bohannon planned to come back and play a sixth season with the Iowa basketball program, he admitted to being confused, perhaps even a little angry.

After filling in for Bohannon at point guard for much of the 2019-20 season and backing up the Hawkeyes’ veteran last season, Toussaint figured his time finally had come to become Iowa’s floor general.

And now Bohannon was taking advantage of special NCAA rules stemming from the COVID-19 pandemic to play yet another season? What did this mean for him?

Then the phone rang. It was Bohannon.

"He told me ‘This is your show I’m here for you,’" Toussaint said.

"The weight just really came off my shoulders after he told me that stuff," he said.

Bohannon, who has started 133 games at point guard over the past five seasons, said he recognized that it was important to make that call.

He long ago became Iowa’s career leader in 3-point field goals, but he now plans to make even greater use of that skill as Iowa's shooting guard while allowing the quicker, more aggressive Toussaint to blossom at the point.

"I wanted to make sure that me coming back wasn’t going to dwindle his spotlight," Bohannon said. "That’s not why I decided to do that. I don’t want to limit him by coming back."

Bohannon said he plans to continue mentoring Toussaint, as he has for the past two years, but he plans to do it now while playing alongside him in the Hawkeyes’ starting backcourt.

"I’m excited for him. He’s been working really hard," Bohannon said. "Me and him have a great relationship and I’m doing what I can to help him along the way and I think he’s going to have a big breakout year this year."

Patrick McCaffery, the son of head coach Fran McCaffery and one of Toussaint’s closest friends, said he also feels his buddy from the Bronx is "primed to have a big year."

"He brings a lot of stuff to the table, especially defensively," McCaffery said. "He’s really quick, he’s got really quick hands. He’s kind of all over the place, in the gaps, getting steals and that type of stuff."

He said Toussaint, who has made just 14 of 48 3-point field goal attempts in his first two years of college, also is going to surprise some opponents with his shooting ability.

"He’s improved his jumper," McCaffery said. "He’s going to make a lot more jumpers, but he’s still trying to control the game and kind of pick his spots on when to attack and when not to attack."

The 6-foot Toussaint started 20 games as a freshman when Bohannon was recovering from hip surgery, but he showed only flashes of his potential last season as a sophomore.

He scored 14 points in an early-season loss to No. 1-ranked Gonzaga. He had six steals early in January against Maryland and 10 points and six assists early in February against Michigan State. He reached a season high with seven assists against Ohio State later on, but in between there were some rough moments.

"I felt like last year was just another learning experience …," Toussaint said. "I don’t want to say it was a bad year or a slow year but I learned and I took a lot from it."

He also was plagued by a bone spur on his left ankle and had surgery immediately after the season to have it removed.

"I just played through it," he said. "I didn’t want to tell anybody just because that’s the way I am. I don’t want to share my business. At the end of the season I talked to (trainer Brad Floy) and he said it’s good that I take care of it now if I want to play a long time."

Toussaint said he’s not yet 100% but he already can feel a difference in his balance and explosiveness.

He also plans to get back to playing with "a chip on my shoulder," just as he did for much of the 2019-20 season and at times last winter.

"When I step on the floor, I always think I’m the best player on the floor," he said. "That’s just how I play, the mentality I play with. If you lace it up in front of me, you’re going to have to show me you’re better than me. …

"I trust my work. My work will be shown this year definitely."

Was the Brewers-White Sox series a preview of the 2021 World Series?

Watch now: Bears get more than they bargained for at receiver

Watch now: Bears get more than they bargained for at receiver

Bohannon learning more about NIL with each passing day

Iowa freshman center Riley Mulvey feels he has held up fairly well in his first several weeks of summer workouts with the Hawkeyes.

Luka Garza added one last piece of hardware Wednesday to top off his stellar college basketball career. The former University of Iowa center was named the Big Ten’s Jesse Owens Male Athlete of the Year for the 2020-21 school year.

If you’re an Iowa basketball fan, you probably were thinking this at some point.

Chris Kingsbury's son to walk on at Iowa

The son of former Iowa basketball player Chris Kingsbury is joining the Hawkeyes as a walk-on.

Iowa guard Joe Toussaint (1) goes to the hoop against Nebraska during a game last season.

Iowa guard Joe Toussaint is pumped up during the first half of the Hawkeyes' game against Oregon in the second round of the NCAA tournament last season.