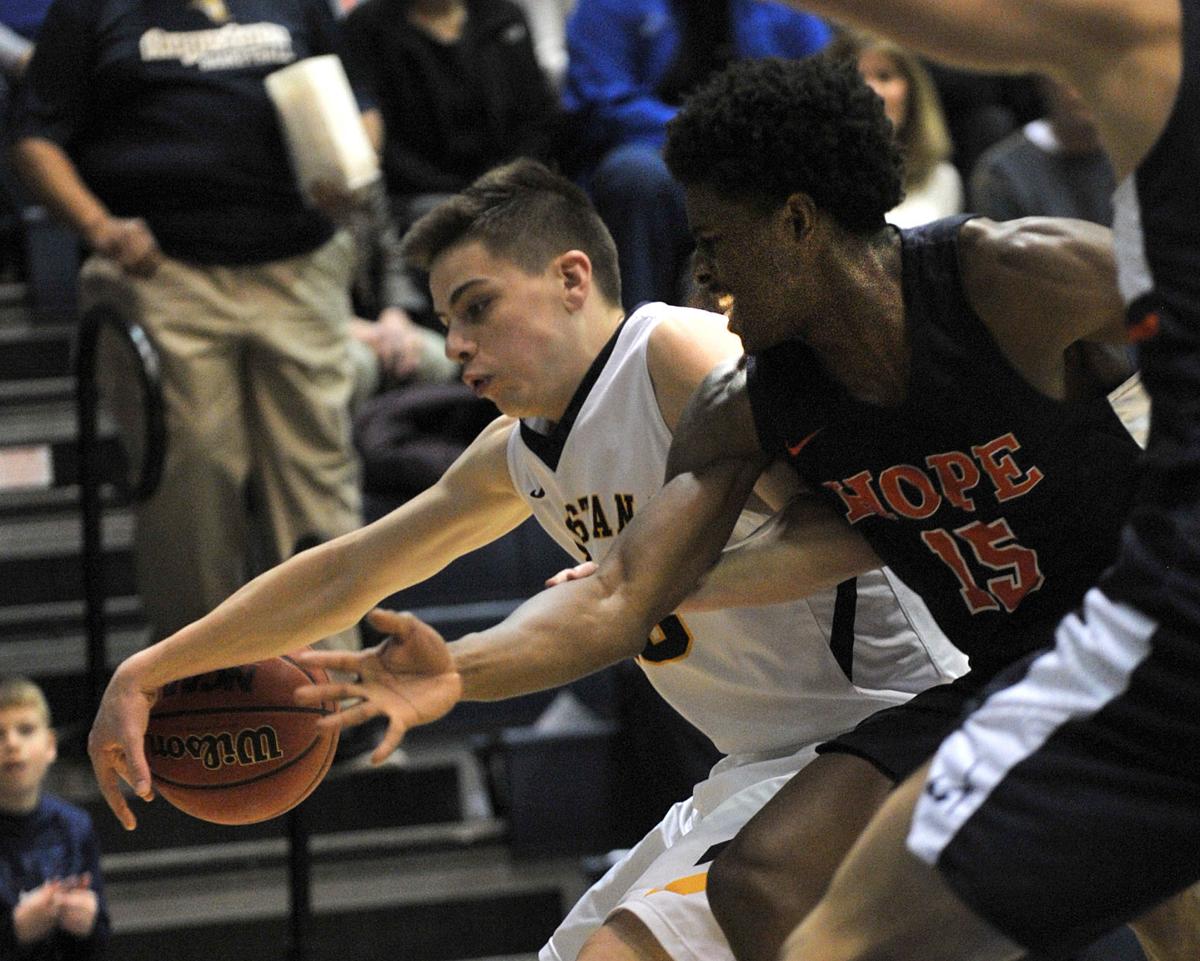 Augustana's Dylan Sortillo and Hope's Dennis Towns battle for the ball near the Augustana basket during a 2018 NCAA Division III tournament game. Sortillo is back at Augustana, this time as an assistant coach. 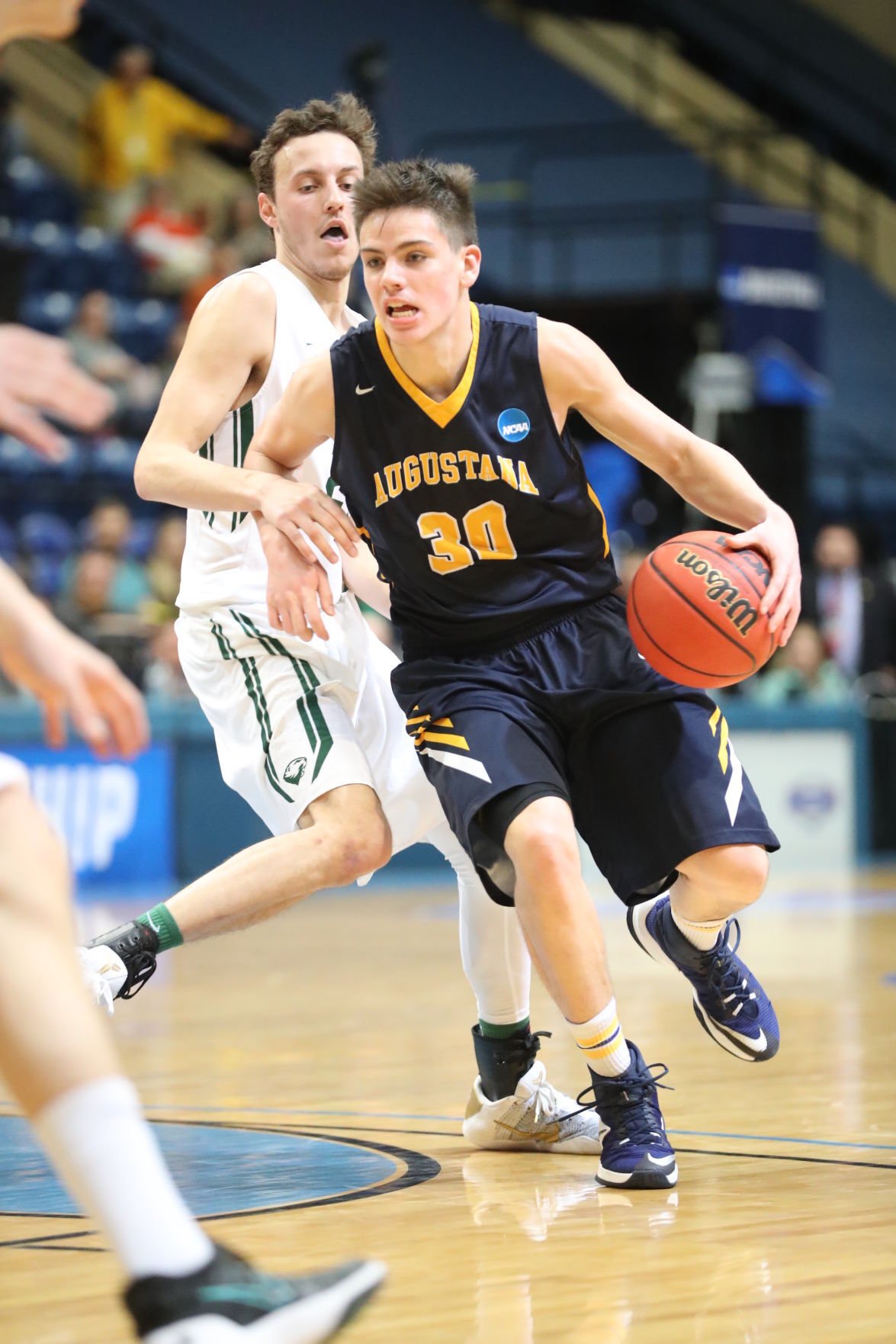 Augustana's Dylan Sortillo drives to the basket against Babson during the 2017 NCAA Division III national championship game. Babson won 79-78. Sortillo is back with the Vikings as an assistant coach.

When they were both in Arizona, former Augustana Vikings Steve Schafer and Dylan Sortillo were trying to figure out a way to combine their interests in basketball.

It took them both being back in the Quad-Cities for that to finally happen.

This week, it was announced that Sortillo, a former standout player for the Augustana men's basketball program, has become part of Schafer's coaching staff for the Vikings.

“It was just a big puzzle that finally fit into place,” Sortillo said.

One of the biggest pieces of that was the COVID-19 pandemic.

Sortillo, a Bettendorf High School standout, graduated from Augie in 2018 with a degree in business administration with concentrations in management and communications. He spent the last two and a half years working with the Arizona Diamondbacks as an account executive for group events and hospitality.

When the pandemic struck and Major League Baseball was shut down, Sortillo was among the 500 Diamondbacks employees put on indefinite furlough since his job focused on working with group sales and events at the ballpark.

He has since landed a job with the Davenport Parks and Recreation Department in sports event management — a position that he feels will give him enough flexibility to also coach.

Sortillo joins full-time assistant Tom Jessee and fellow part-timers Dallas Duwa and Alex Washington on the Viking bench. Sortillo takes over for another former Viking, Mark Roth, who left the program and moved to Madison, Wis., to continue work on his graduate degree.

In fact, Sortillo said one of the first things he did when the opportunity arose was to call Roth, a former Augie teammate, to find out more about the job.

“He was really awesome and super honest,” said Sortillo of Roth. “He said ‘I loved every second of it and I think you would, too. I think you'd be a great fit.’ ... That carried a lot of weight.”

So did having the opportunity to join the other three assistants, all of whom he played for while becoming the first player in the CCIW since 1974 to play on four straight league championship teams and the only player to play on three CCIW Tournament champion teams.

“That was a big reason I came back,” Sortillo said. “I heard they were all staying, and they all had a huge impact on me. They are all great coaches and great people. If they are telling me that's the staff I get to be around, it was a no-brainer that we would have some fun. I love those guys and I’m excited to be back with them in a different role.”

This will be his first coaching venture and he figures there will be a huge learning curve in what could be a career calling.

“We are so excited to have him with us,” said Schafer, who is beginning his first year at the Viking helm. “He's been such an impact just the short time he's been with us; he's been out recruiting for us — he was in Chicago working a West Coast Elite High Academic Showcase and in Salt Lake City in the same capacity. He's hit the ground running from a recruiting perspective.”

Sortillo said that he and Schafer met through former Viking boss Grey Giovanine when Schafer was at Benedictine-Mesa University in Mesa, Ariz.

“We kind of created a relationship and maintained it over those couple of years,” said Schafer. “I actually tried to get him to come help me out at Benedictine, but our schedules just didn't align for it to work out.”

Sortillo said that he did watch a few Benedictine games — seeing a lot of the Viking principles Schafer employed — and “gave some feedback to the coach about what I saw.”

It appears there might be a lot more of that happening in the near future as the two finally are on the same bench.

The college basketball season ended six months ago, but Luka Garza is still adding to his impressive stack of postseason awards.

I may be one of the few college basketball aficionados who is even giving this idea the time of day.

Augustana's Dylan Sortillo and Hope's Dennis Towns battle for the ball near the Augustana basket during a 2018 NCAA Division III tournament game. Sortillo is back at Augustana, this time as an assistant coach.

Augustana's Dylan Sortillo drives to the basket against Babson during the 2017 NCAA Division III national championship game. Babson won 79-78. Sortillo is back with the Vikings as an assistant coach.