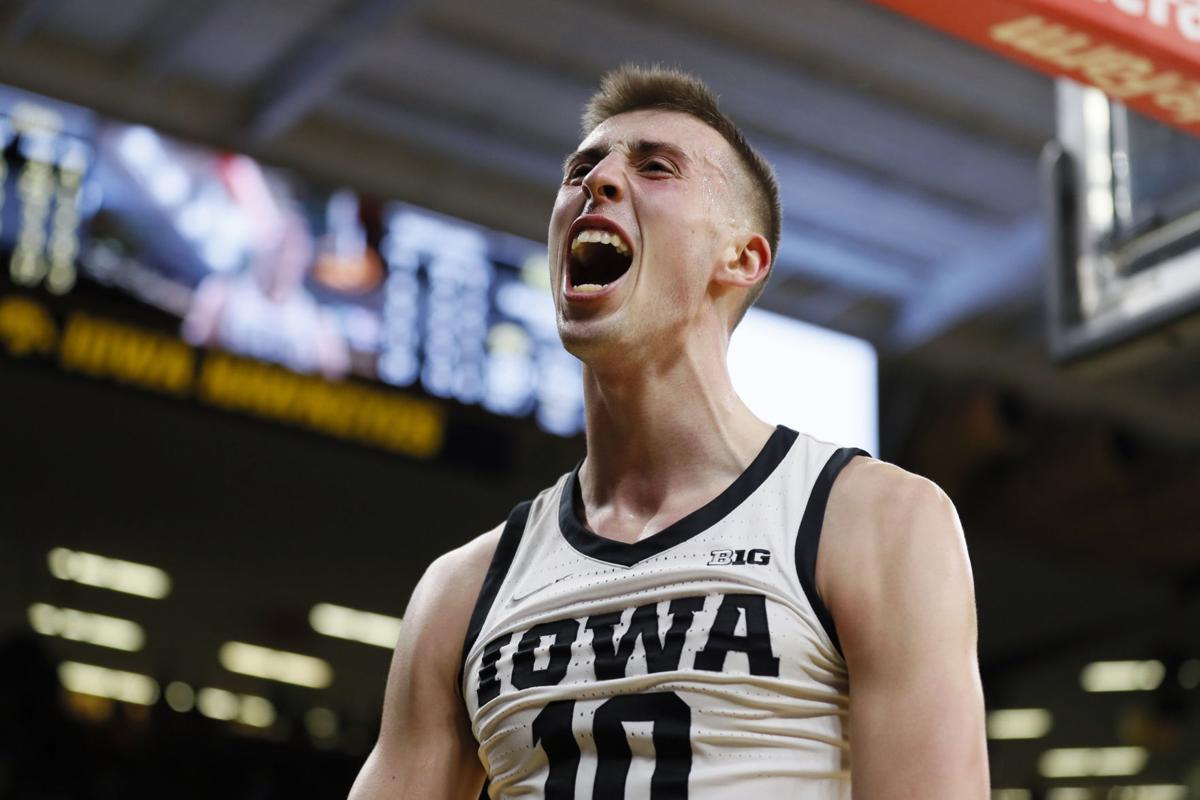 Iowa guard Joe Wieskamp celebrates after making a basket during the second half of Friday's game against Maryland in Iowa City. 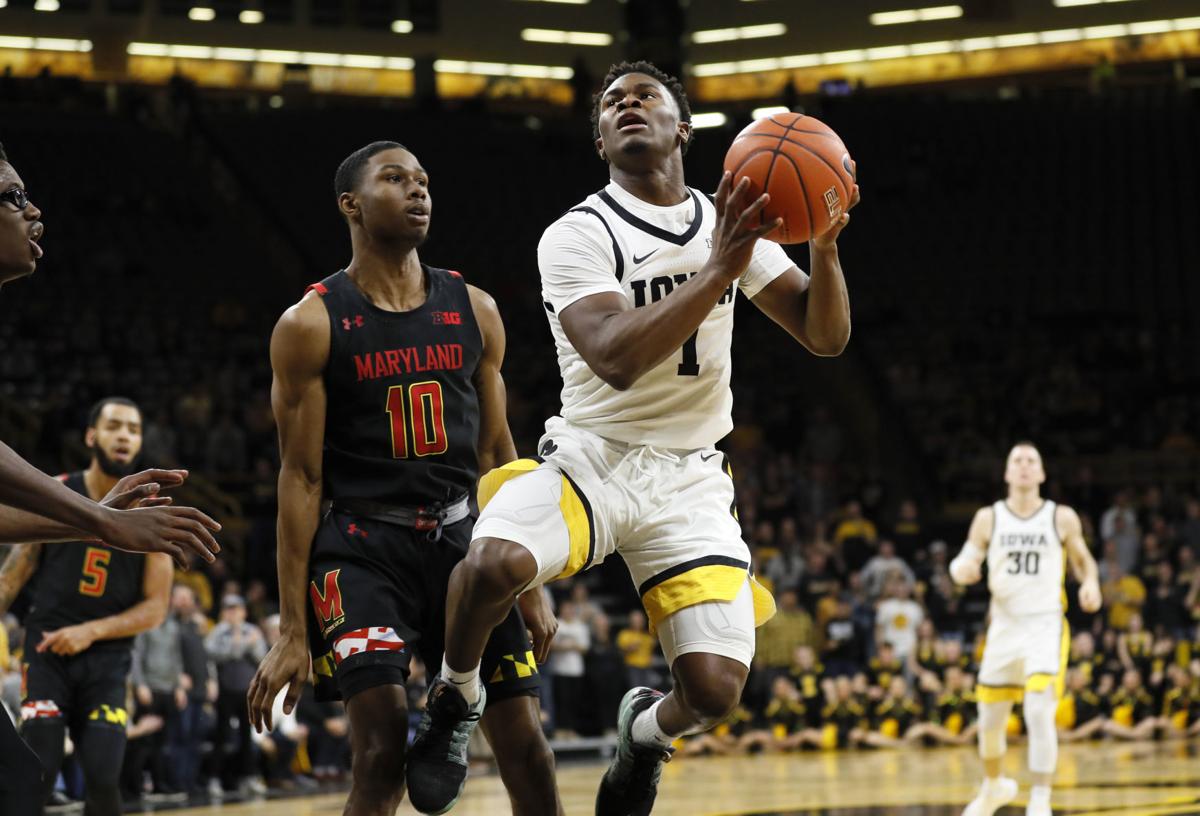 Iowa guard Joe Toussaint drives to the basket past Maryland guard Serrel Smith Jr. during the second half of Friday's game in Iowa City.

IOWA CITY — OK, so you kind of knew Joe Wieskamp wasn’t going to go 1 for 10 from 3-point range again. Maybe not ever.

What you didn’t know was that Cordell Pemsl was going to make a 3-point field goal and that Iowa was going to respond to its most disheartening loss of the season with perhaps its best defensive effort of the season when 12th-ranked Maryland came to visit Friday night.

Wieskamp fired in a career-high 26 points, Luka Garza did what he almost always does, Pemsl nailed his first 3-pointer in four years of college and Iowa made a very good team look very bad as it romped to an astonishingly easy 67-49 rout of the Terrapins at Carver-Hawkeye Arena.

Wieskamp made 5 of 9 3-point attempts this time — four of them before halftime— and he added 11 rebounds and four steals. Garza contributed 21 points and 13 rebounds.

But the Hawkeyes didn’t really execute that crisply on offense. They shot 37.7 percent from the field and turned the ball over 18 times.

It’s what they did at the other end of the floor and on the boards that gradually turned the contest into no contest.

"When you look at this game, rebounding was really critical when you play a team that is big on the glass," Iowa coach Fran McCaffery said. "We had to battle them on the glass."

"We were bad. We stunk," Maryland coach Mark Turgeon said. "I’ve been doing this a long time and this is about as bad as I’ve ever seen us play."

He said the Hawkeyes deserved a large portion of the credit, though.

"They did a nice job," he said. "They adjusted to whatever we adjusted to in their zone very quickly. We’d try something and it would work and then the next time it wouldn’t work."

The Hawkeyes trailed early and were down 15-10 about eight minutes into the game, but then went on a 19-2 scoring run that was mostly defense. Maryland went 0 for 7 from the field with seven turnovers in that decisive stretch and went 8 minutes, 35 seconds without a field goal.

The Hawkeyes took the lead for good in the most unlikely way imaginable.

Pemsl, a fourth-year junior who had attempted only two 3-pointers in his entire career, drilled a shot from behind the arc on the right wing to give them an 18-15 cushion.

"I’ve always been a guy who felt able to knock down a shot," said Pemsl, who hadn’t tried a 3 in more than three years before launching one in Tuesday’s 76-70 loss to Nebraska. "It’s just been a mental thing for me. I decided this past week or so that I’m comfortable taking that shot. I make them in practice all the time. … I caught it in rhythm and was confident and just let it go."

McCaffery said that play gave his team a huge boost of energy.

"He’s a guy that other guys respond to in that way," the coach said. "We swung it to him, his defender was on the block, he never moved and Cordell didn’t hesitate."

Pemsl, who also had four assists, then slipped the ball inside to Wieskamp for a layup, Garza scored on a putback and Wieskamp scored on the break.

After the lead reached 29-17, Maryland’s Darryl Morsell finally ended the run with a fast-break basket and Donta Scott threw in a 3-pointer, but the Hawkeyes kept attacking with Garza and Wieskamp nailing back-to-back 3s. Wieskamp hit one more 3 with three seconds left in the half to make it 38-24.

"The game got away from us right before halftime," Turgeon said.

It didn’t really get any better for the visitors in the second half. They briefly got the deficit down to 10 points before a 13-3 scoring run capped by another Wieskamp 3 put the Terps away.

McCaffery said he never had a doubt that Wieskamp would bounce back after making just 1 of 10 3s at Nebraska, but the former Muscatine star admitted to being extremely disappointed in himself.

"I don’t think I ever shot bad in my life from 3 …," Wieskamp said. "I know I left a lot out there, a lot of points that I could have had. There was a lot of emotion built up knowing this was a big test for us tonight. We knew that if we won this game we could get the season back on track."

McCaffery said he was very impressed with the resilience the Hawkeyes showed in bouncing back from the Nebraska loss.

"Even coming off a two-game losing streak, we weren’t going to back down to Maryland tonight," Pemsl said. "We were playing great these last two days. I thought we were prepared and we came out and executed the game plan."

Iowa guard Joe Wieskamp celebrates after making a basket during the second half of Friday's game against Maryland in Iowa City.

Iowa guard Joe Toussaint drives to the basket past Maryland guard Serrel Smith Jr. during the second half of Friday's game in Iowa City.