Iowa guard Joe Wieskamp drives to the basket past Nebraska guard Thorir Thorbjarnarson, left, during the second half of Saturday's game in Iowa City. 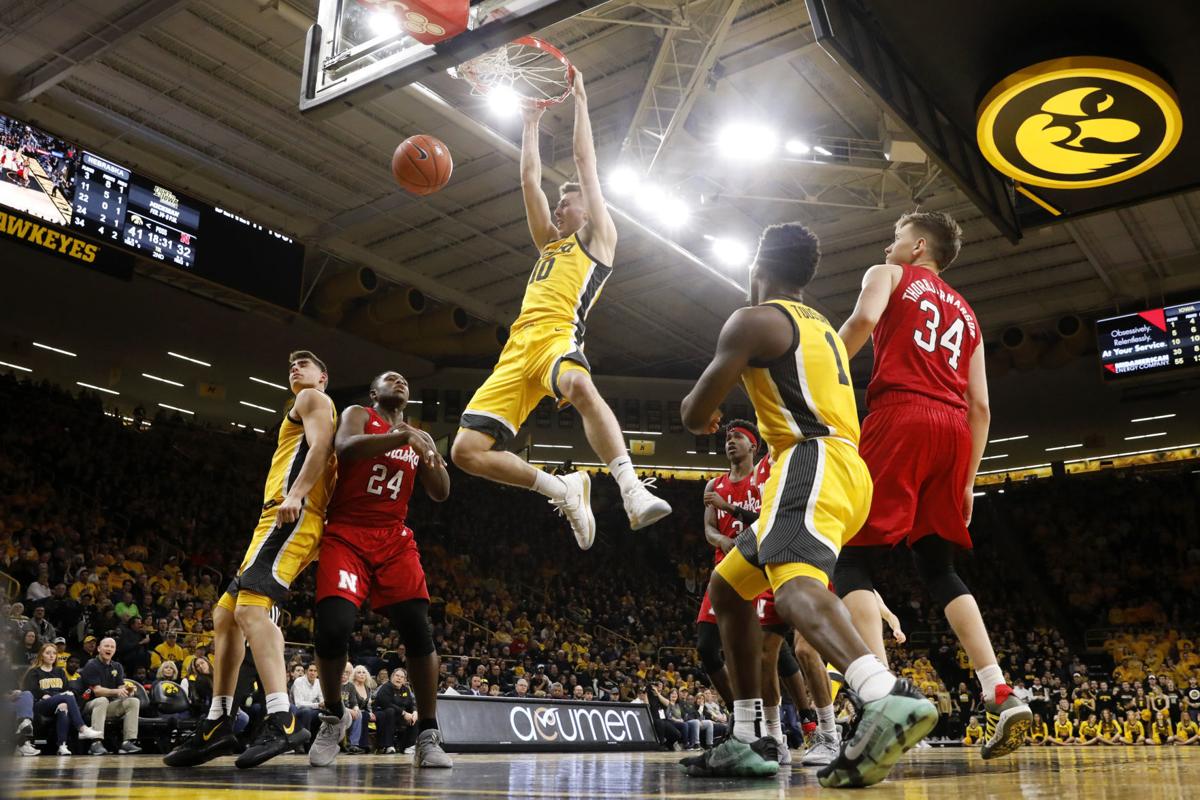 IOWA CITY — For a month or so, Joe Wieskamp had to hear all about how poorly he shot from 3-point range in Iowa’s early-January loss to Nebraska.

It got old. The former Muscatine High School star was only 1 for 10 in that game although he did actually score 21 points in perhaps the Hawkeyes’ most disappointing loss of the season.

He wasn’t about to let it happen again.

Wieskamp scored a career-high 30 points and the 17th-ranked Hawkeyes vented their frustrations from a lopsided loss at Purdue three nights earlier by romping to their most decisive victory of the Big Ten season Saturday, cruising to a 96-72 rout of Nebraska at Carver-Hawkeye Arena.

"I said the other day I didn’t think Wiesy would go 1 for 10 again," teammate Connor McCaffery said. "He didn’t."

Wieskamp actually didn’t make a 3-pointer until the second half this time, but he made 10 of 15 shots from the field, scoring in about every way imaginable to help the Hawkeyes (17-7, 8-5 Big Ten) erase the memory of the Purdue debacle and cling to the top of the Big Ten standings.

They are tied for fourth with Michigan State, just a half game behind Penn State and Illinois and a game-and-a-half behind first-place Maryland.

"I don’t think he gets talked about for what he’s been able to do for us this year," chimed in Iowa center Luka Garza, who scored 20-plus points for the ninth consecutive game, finishing with 22. "He and I, as a duo, have been kind of lethal in terms of the way we’ve been able to score the ball and he’s been tremendous and consistent, showing up every night.

"Teams are developing a lot of game plans for me, but they’re keying on him as well and making it tough for him to get open looks. Tonight I think he just did a great job."

Wieskamp pretty much delivered the knockout punch after the Hawkeyes endured some ups and downs in the first half. He scored 20 points in the first 8 minutes, 5 seconds of the second half, mixing a pair of 3s with a dunk, a fast-break layup, a couple of drives and six free throws to balloon the Iowa lead to 72-40.

"I guess I just kind of got in a little rhythm," the sophomore forward said. "People were finding me at the right times. I was reading when they were flying at me for my shot so I just took it to them and finished around the rim."

Garza said the win was exactly what the Hawkeyes needed after the 36-point loss at Purdue. At one point in the second half Saturday, they led by 38 (86-48).

Fran McCaffery said he would have been shocked if his team hadn’t come out fired up and determined to make up for what happened a few nights earlier and in that loss at Nebraska a month ago.

"We had to play better and we did," he said. "We had a terrific start, which we needed. We didn’t have a good start the other night."

The Hawkeyes never trailed and built a 15-2 lead after a 13-point scoring run in which Garza and Connor McCaffery accounted for every point.

But after leading by 16, they stalled offensively and went eight minutes without scoring. They missed 11 consecutive shots and mixed in three turnovers to let the Cornhuskers close to within 25-21.

Wieskamp finally halted the drought by scoring on a drive and the Hawkeyes built a modest lead. CJ Fredrick, who made only 1 of his first 8 shots, fired one in from 25 feet with 6-foot-8 Matej Kavas in his face as the halftime buzzer sounded, pushing the Iowa lead to 41-30 at intermission.

"I make the most difficult shot and I missed the open ones," Fredrick said. "I’m still trying to process that."

Wieskamp and the Hawkeyes’ fast break got rolling after that to abruptly turn the game into a rout. Neither Garza nor Wieskamp played in the final 10 minutes.

"The one thing I told them is if we’re not going to get back in transition, then just stay on the bus," Nebraska coach Fred Hoiberg said. "We didn’t have a chance if that happened. They are too good at getting down the floor. They are too explosive. They have too many weapons."

The Cornhuskers (7-16, 2-10 Big Ten) got 18 points off the bench from Jervay Green but lost for the eighth straight game.

Iowa guard Joe Wieskamp drives to the basket past Nebraska guard Thorir Thorbjarnarson, left, during the second half of Saturday's game in Iowa City.