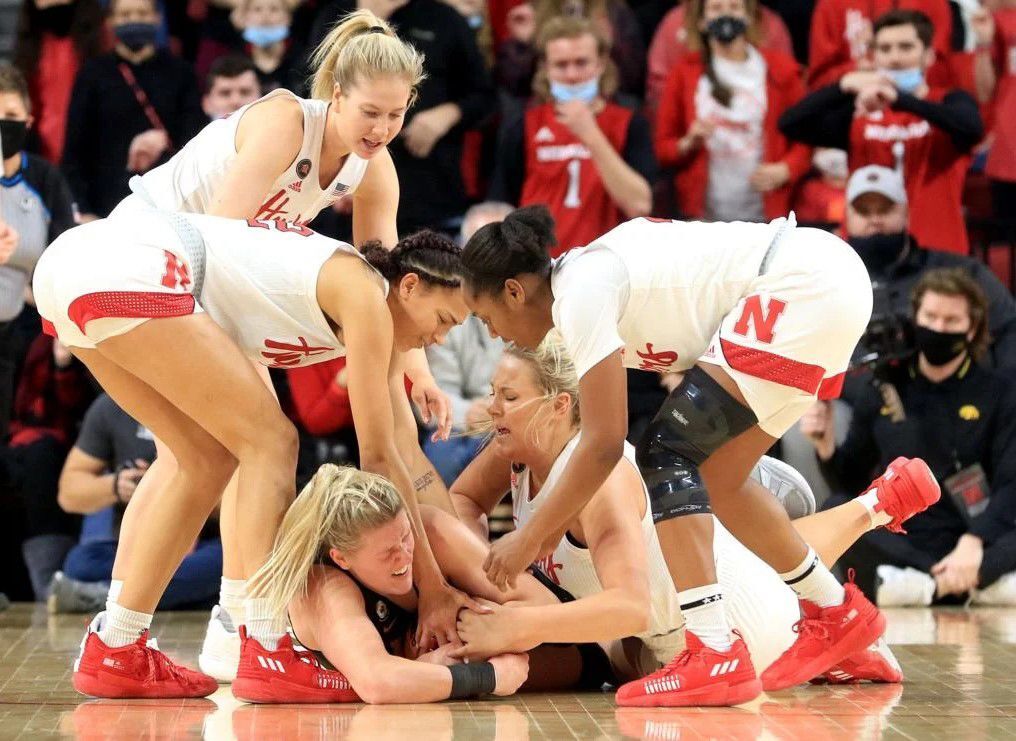 Iowa's Monika Czinano gets on the floor for a loose ball with several Nebraska players during Sunday's game in Lincoln. Iowa pulled out a 95-86 victory. 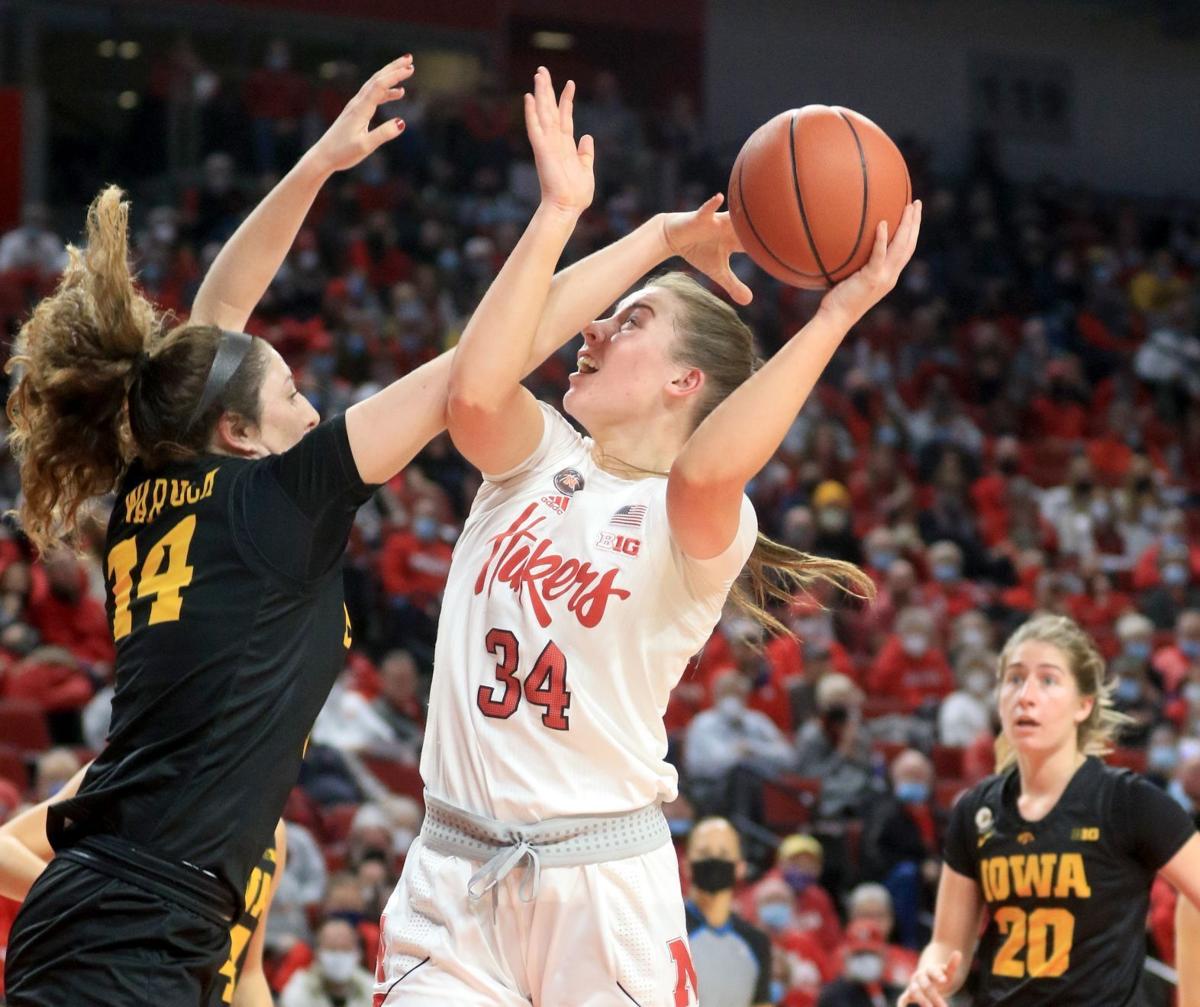 LINCOLN, Neb. — The University of Iowa women's basketball team has struggled to find its touch from the 3-point line this season.

The Hawkeyes rediscovered it Sunday afternoon in front of 8,415 fans at Pinnacle Bank Arena.

No. 22 Iowa splashed in a season-best 11 shots from beyond the arc as it rebounded from a Thursday night home stumble to Northwestern with a 95-86 victory over Nebraska.

Caitlin Clark scored 31 points, McKenna Warnock 23 and Monika Czinano had eight of her 20 in the pivotal fourth quarter.

Clark had 12 assists and grabbed eight rebounds in posting her sixth double-double this season. She agreed that she was determined for Sunday’s game. Last season she scored 39 and 35, respectively, in wins against Nebraska.

“I was pretty excited to come back here, especially after our showing last year,” the sophomore from West Des Moines said. “I enjoy playing here. I knew the crowd was going to be pretty good, and I love that. I was kind of getting into it with them a little bit. But I think for women’s basketball that’s exactly what you need. And I love that.”

The Hawkeyes came into the game shooting 29% from 3-point range this season, but were 11-for-19 in this game.

“We did not defend the way we need to defend against a really high-powered offense like Iowa,” Nebraska coach Amy Williams said. “I thought they came in and made big shots and big plays.”

Sam Haiby scored 18 points, Alexis Markowski and Jaz Shelley had 14 points each and Ashley Scoggin added 13 for Nebraska (13-2, 2-2). Shelley also had 11 rebounds for her fifth double-double this season.

A Scoggin 3-pointer gave the Cornhuskers their only lead of the game, 79-78, early in the fourth quarter but Iowa scored the next seven points. Nebraska got within four with 1:26 to go but Czinano scored twice inside and a Clark free throw accounted for the final margin.

“I give a lot of credit to Nebraska,” Clark said. “I think they’re a really solid team. That was as super-fun game. They’re very offensively skilled. Those are the games that people want to tune in and watch. It’s exciting basketball and getting up and down and playing fast, shooting the ball like McKenna does. They had people who were able to score the ball.

"If you’re a basketball fan, men’s or women’s, I don’t know who wouldn’t want to watch what just happened tonight.”

Nebraska tied the game with two minutes left in the third quarter. Iowa, however, went into the final period with a 74-70 lead after Clark made three free throws after being fouled on a 3-point attempt at the buzzer.

Warnock hit all five of her 3-point shots in the first half when she scored 17 points. Clark also had 17 points. Iowa had its largest lead of 11 with three minutes remaining in the half after Warnock's fifth 3-pointer but Nebraska finished on a 7-2 period-ending run capped by Haiby's 3 to trail 52-46.

Iowa travels to Purdue at 6 p.m. Thursday before returning home to face Nebraska next Sunday at 1 p.m.

Key stat: Iowa made a season-high 11 shots from beyond the arc to hand Nebraska its first home loss of the year.

There was a serious and recurring theme in the Augustana College women’s 78-69 basketball loss to the Millikin Saturday evening at the Carver Center.

Iowa made 31 of 34 free throws and outscored Nebraska by 25 points at the charity stripe to win Sunday's Big Ten Conference game in Iowa City.

After an unscheduled winter break, the Augustana College women's basketball squad made its return to action Monday night.

Iowa's Monika Czinano gets on the floor for a loose ball with several Nebraska players during Sunday's game in Lincoln. Iowa pulled out a 95-86 victory.