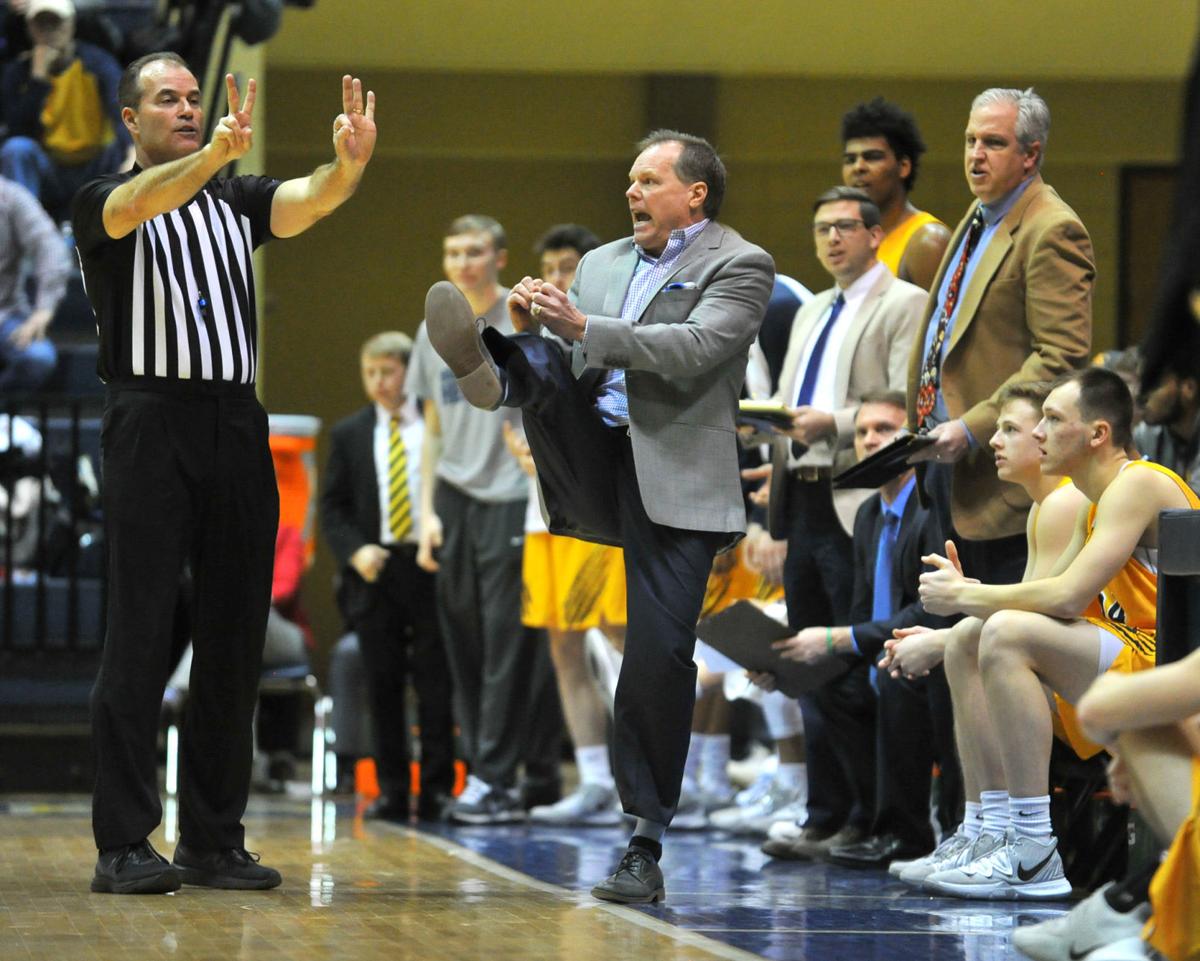 While Augustana officials begin the search for men's basketball coach Grey Giovanine's replacement, it appears as if top assistant Tom Jessee, right, will remain in that position with the program. Giovanine announced his retirement last week after 21 years leading the Augie program, all with Jessee by his side. 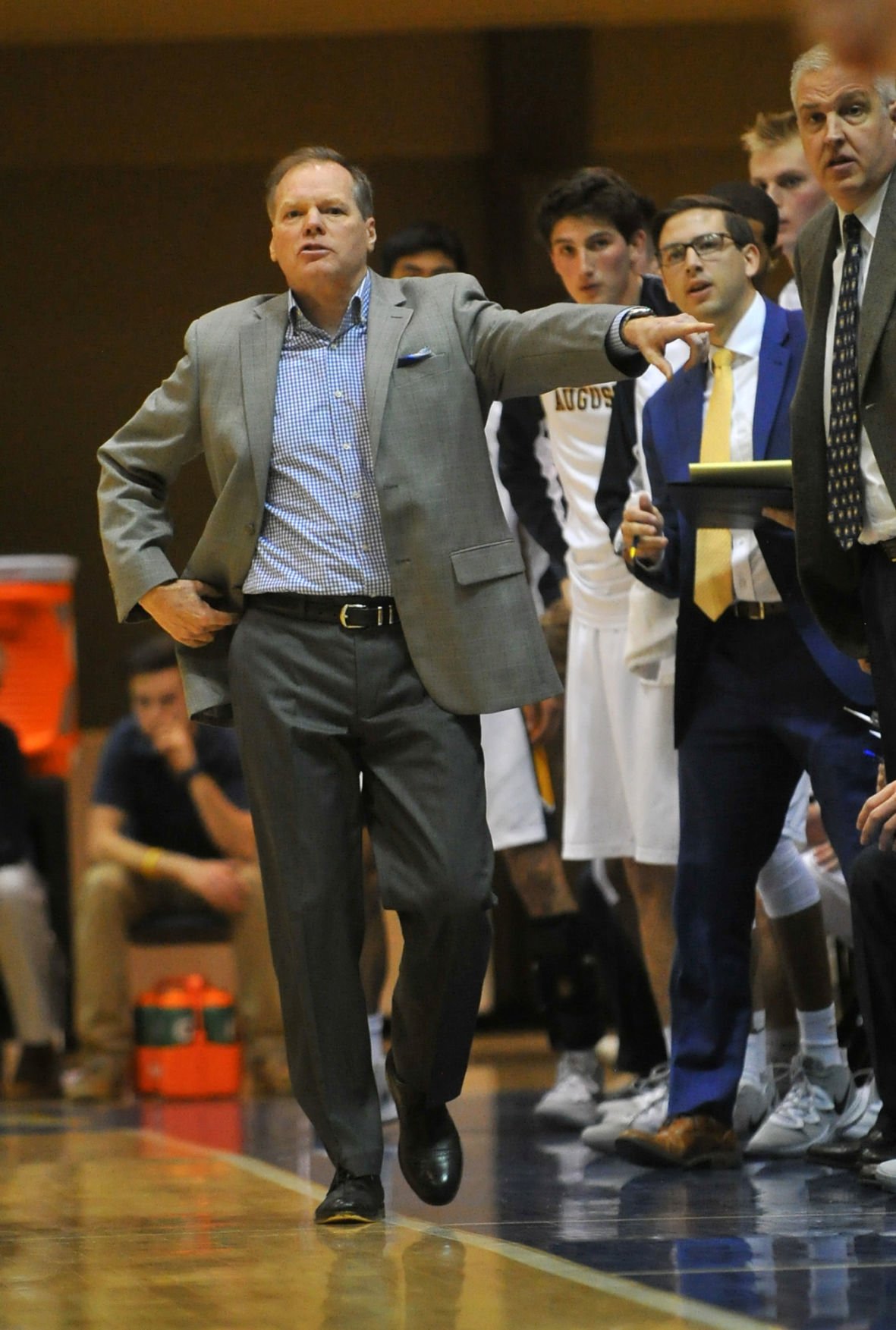 When announcing his retirement as Augustana College's men's basketball coach last week, Grey Giovanine mentioned on more than one occasion the success the Vikings had in his tenure was because of his assistant coaches.

In his 21 years at Augie, Giovanine had some terrific basketball minds next to him on the bench as he compiled a 433-150 record. Tom Jessee, his top assistant, was with Giovanine all 21 years. The most recent staff also included Dallas Duwa along with former Augie players Mark Roth (class of 2015) and Alex Washington (class of 2009). Along the way, former high school coaches Larry Schulte and Ray Swetalla were on staff.

“Never have I encountered a more loyal, hard-working guy,” said Giovanine of Jessee. “I think we have had as good a staff here as any Division I program I have ever been at.”

Washington said part of that comes from Giovanine “never treating any of us like part-timers. … Ever since I came back in 2013, you're recruiting, doing campus visits and scouting and doing everything as if we're operating with four full-time guys. It doesn't happen that way at other places. That's one thing I'm happy Coach G was able to do is treat us as another full-time assistant and doing those things.”

With the head coaching position open, it begged the question of what will happen to the current assistants.

In a somewhat unique situation, it seems the new coach will inherit at least one staff member.

Jessee, a 1981 Augustana graduate, said he is not applying for the head coaching position, but has received assurances he can remain as the full-time assistant.

Washington said he is weighing his options as to whether to apply for his first head coaching job or not, but either way would like to be a part of the staff moving forward if possible. He currently has a full-time position in the college's CORE program, working with students on the academic side.

Duwa has been on staff as a part-time assistant since 2008. He continues to teach at Pleasant Valley High School, where he was boys basketball coach for 12 seasons. Duwa could not be reached Monday to confirm his plans, but athletic director Mike Zapolski was the under impression he would like to return. That would make sense since his son, Carter, is on the team. Carter was expected to be a contributor this past season, but a shoulder injury and subsequent surgery ended his freshman season. He has been fully cleared to resume team activities this month.

Roth, who spent five years on the Augie staff, is leaving the program to relocate to Madison, Wis. He is working on his graduate degree at Concordia University, but hopes to remain in coaching in some capacity.

All four coaches continue to recruit players for the incoming class.

For the 51-year-old Jessee, this is a bit of deja vu. He remained on staff when the baton was passed from Steve Yount to Giovanine in 1999 and that worked out well.

“I'm happy to continue being associated with the college,” he said. “I'm working really hard to hold it together until they name another coach. Recruiting continues to move forward and I'm interacting with our current players and the guys that have sent in their tuition deposits already, and continue to work on the guys that are still trying to decide on what to do for next year.”

Jessee said that he has been in contact with the 14 players with eligibility remaining and that all have committed to continue being a part of the program.

As of Monday afternoon, Zapolski said he had received 46 applications for the job that Giovanine vacated last week. The application process will remain open until May 26 with probably three finalists brought to campus for interviews.

Zapolski said that some of those 46 candidates do not fit what he is looking for in Giovanine's replacement.

He said he would prefer someone with an understanding of the D-III recruiting process.

"We're not running around with scholarships and that everything is merit based, based upon your academic performance in high school and how you do on the board score,'' he added. "In my opinion, that's a difference-changer I would lean toward … That's not to say that would exclude people, but that's definitely a preference.”

Zapolski also said that he plans on using Giovanine as a sounding board when it comes to filtering through the applications as well as other aspects of the process.

“He will certainly be meeting with folks we identify to come to campus,” said Zapolski “Leading up to that, I'll talk to him about people … There is no one who can talk more about the job than he can.

“He made it very clear that he is willing to be as helpful as we would like him to be. I'm certainly going to utilize him as an asset.”

One hundred days from the first kickoff of the 2020 season, Gary Barta expects there to be football this fall at Kinnick Stadium.

Cyclones have hope that turnaround is coming

Forgive Steve Prohm if he isn’t very interested in talking about what happened last winter. It’s history. Time to move on.

IOWA CITY — The University of Iowa’s two Big Ten outstanding sportsmanship award winner for this year both came out of the same sport.

No football could have trickle-down impact on Iowa basketball

If there are no college football games played this fall or if the games are played without fans, as it appears could be the case, it could hav…

Ken Burmeister, one of the assistant coaches on Iowa’s 1980 Final Four men’s basketball team, died Tuesday at the age of 77 following a battle…

While Augustana officials begin the search for men's basketball coach Grey Giovanine's replacement, it appears as if top assistant Tom Jessee, right, will remain in that position with the program. Giovanine announced his retirement last week after 21 years leading the Augie program, all with Jessee by his side.