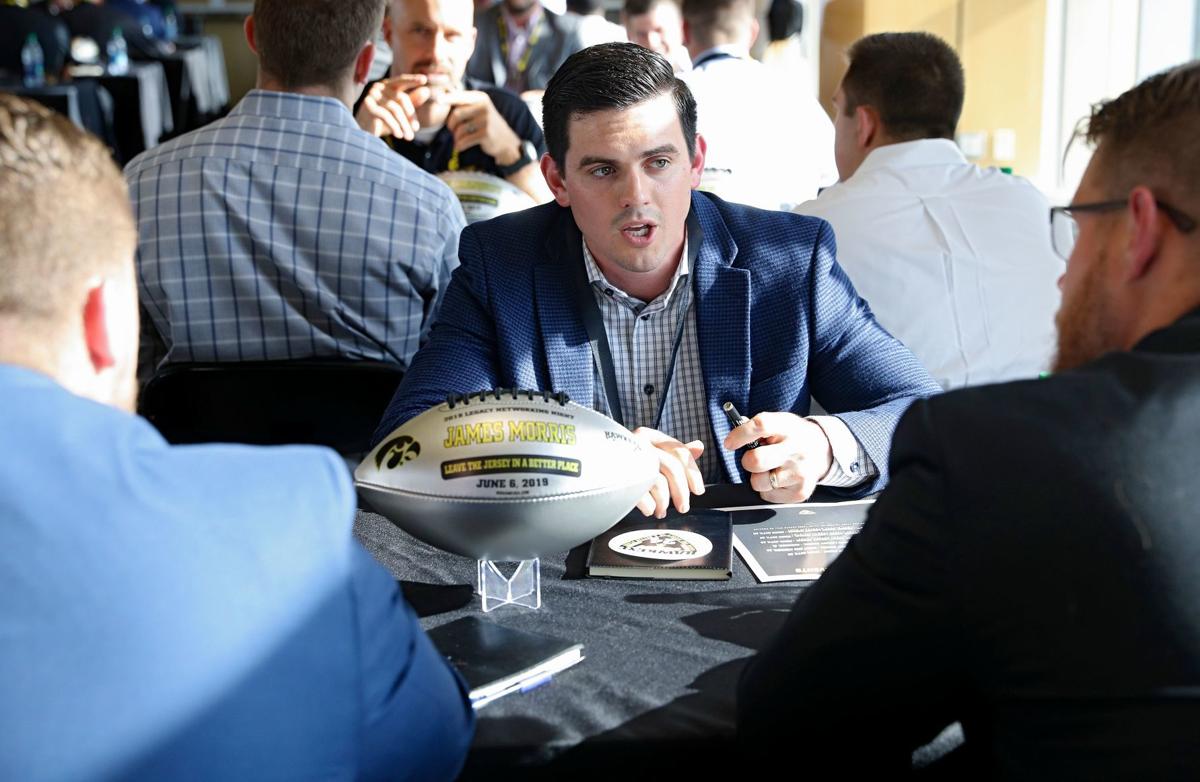 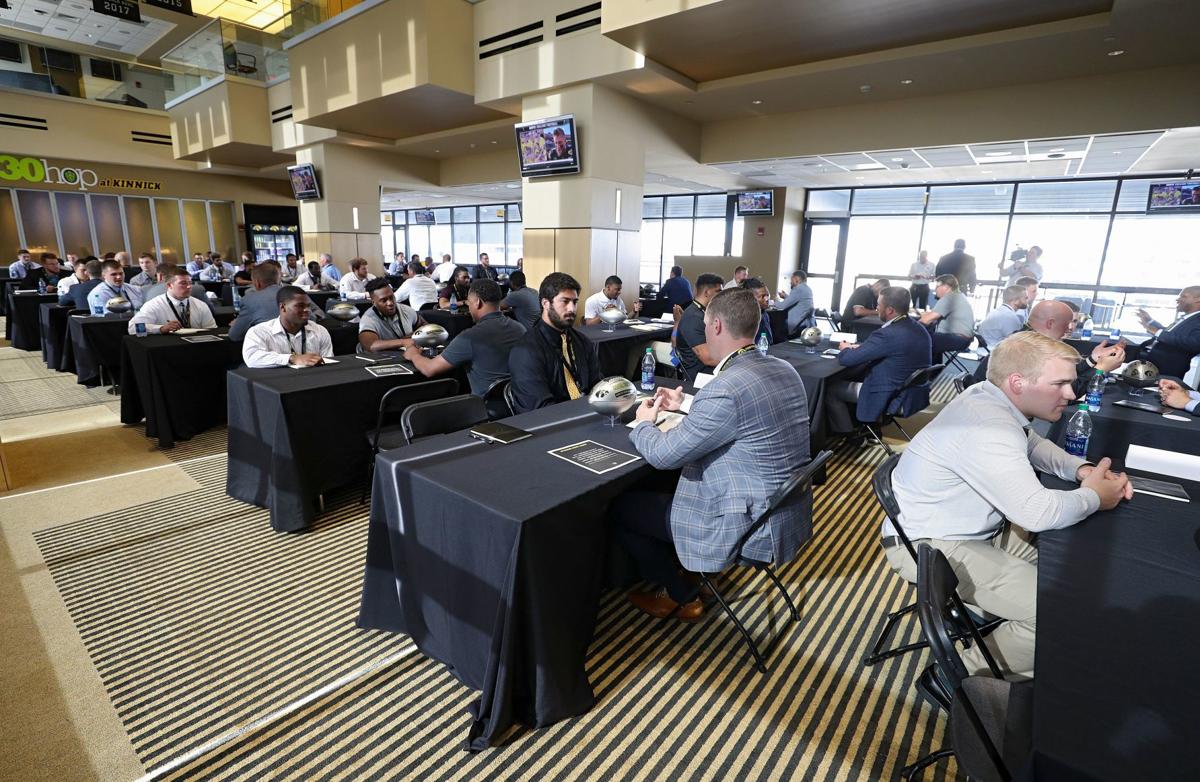 Current Iowa football players moved from one table to the next talking with former Hawkeyes during the program's fifth annual Networking Night on Thursday at Kinnick Stadium. 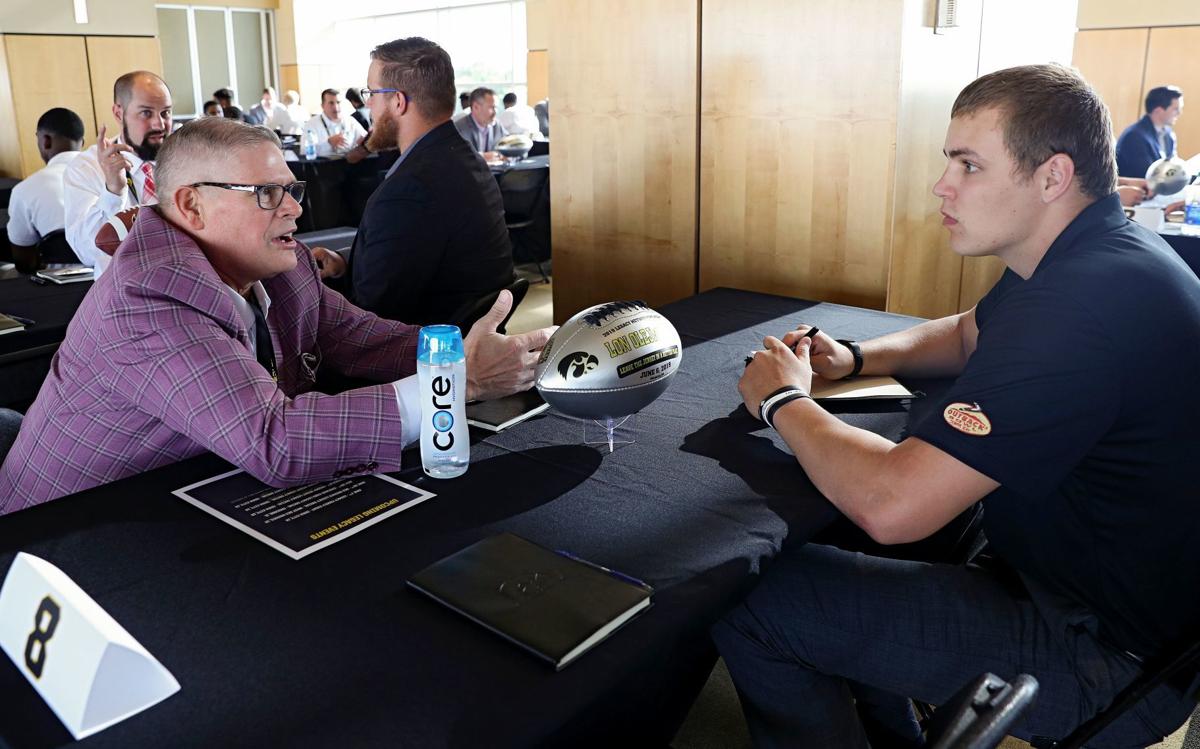 Iowa’s football program hosted its fifth annual Networking Night, bringing together a group of 31 former players to connect and communicate with 70 players who are back on campus working toward the start of the 2019 season.

Current Hawkeyes worked their way around a room at Kinnick Stadium, asking questions and getting answers about life after football.

They then shared dinner tables at the Iowa football performance building, getting to know each further and making friends who could ultimately one day provide a real-world assist when they enter the job market.

"When these guys were in our footsteps, all they wanted to do was play football," Iowa quarterback Nate Stanley said. "When that ended for them, it wasn’t the end of their life or their career."

That is the point of an event coach Kirk Ferentz said was the brainchild of former Hawkeye quarterback Chuck Hartlieb.

"Probably of all the things we’ve done in the last 20-plus years here, this event continues to give us the best feedback," Ferentz said. "Our players enjoy it. It has been a good deal, a good initiative."

Eric Thigpen, an Iowa defensive back from 1995-98 who played in the NFL, CFL and Arena League before calling it a career, now works in pharmaceutical sales.

He said many of the questions he fielded were ones he had himself when he was playing for coach Hayden Fry’s teams.

"Guys were asking about grad school, internships, just life after football. You invest so much in this game, but the reality is not everyone is going to the NFL, and if you do, it’s not forever," Thigpen said. "Hopefully, we could provide some insight."

"A lot of really good questions from guys who understand that ultimately there has to be more to life that playing football," Conklin said. "Some wanted to know about my job, grad school, those types of things. This is a great event. I wish it would have been around when I was playing because the questions, they were a lot of the ones I had when I was playing. What’s next?"

Players moved around the room at a fairly brisk pace, taking notes, collecting information and gaining feedback at every stop along the way from former players who volunteered their time.

"The former players, they’ve been successful on and off the field, and they’ve been in our shoes, at a point where they didn’t maybe know what they wanted to do with their lives after football," running back Toren Young said.

"It was a good chance to pick their brains about what it takes to get from here to where they are now. All of us, we want to play as long as we can, but someday, that will end."

Anthony Herron, who played on Iowa teams coached by Fry and Ferentz between 1997-2000, saw injuries ultimately end a professional career that included stints in the NFL and Arena Football.

He majored in business and then English at Iowa and now works in broadcasting with the Pac-12 Network and as an analyst on Bears postgame show on Chicago’s Fox television station.

Herron encouraged Hawkeyes to maximize what they can learn today to create opportunities tomorrow.

"The skills that you develop as part of this football program, the discipline, the teamwork, those translate to the workforce in a number of ways," Herron said. "The more they learn from football and the detail work that goes into it, the better prepared they will be."

An engineering major whose father works in automotive design in his hometown of Detroit, Ojemudia dreams of one day also working for Ford.

He spent time Thursday talking with a couple of former Hawkeyes now working for John Deere.

"My dream is to play professional football, but there will be time when I will need what I’m learning in the classroom. Those guys stressed that there will be opportunities and some may not be far away," Ojemudia said. "It was a good chance to talk with those guys."

"Hopefully, I won’t have to do that for a while, but I’ve always thought about my professional career," said Stanley, who eventually would like to pursue a career in physical therapy. "That’s something my parents have instilled in me. The education is a big part of this."

Ferentz has found that current players find a commonality with the former Hawkeyes they get a chance to talk with during the event.

"They’ve been in the same positions, maybe aren’t sure what they want to do with their lives but understand that the reality is at some point they’re going to need to figure it all out," Ferentz said.

The networking event gives current players connections, someone to be in contact with when that day does come.

"This is what football at Iowa is about," Ojemudia said. "It’s about getting us ready for life, not just the next game. Things like this, that’s part of why we come here."

Current Iowa football players moved from one table to the next talking with former Hawkeyes during the program's fifth annual Networking Night on Thursday at Kinnick Stadium.