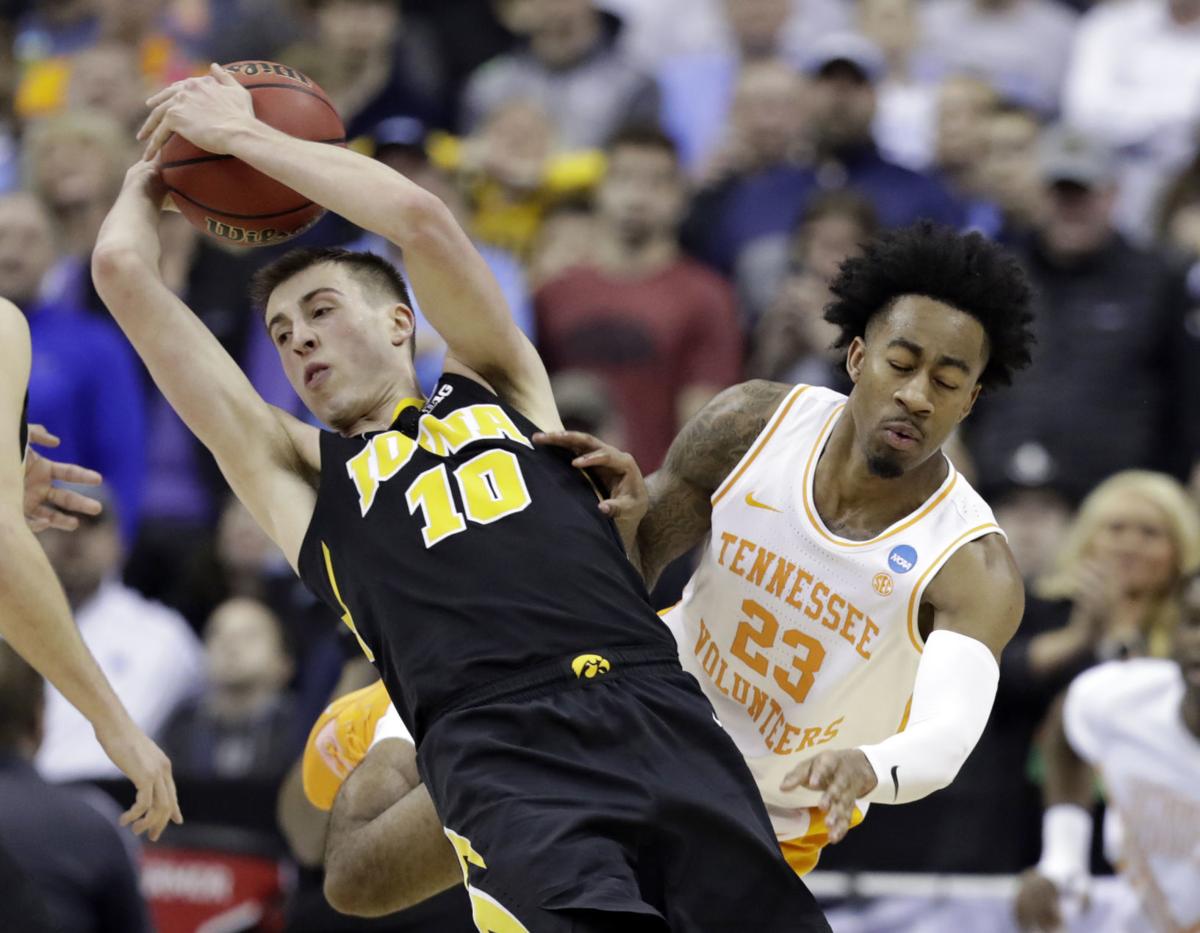 Iowa's Joe Wieskamp (10) grabs a rebound during a second round NCAA tournament game in Columbus, Ohio, last year. Wieskamp was one of 10 players named to the All-Big Ten preseason team Wednesday. 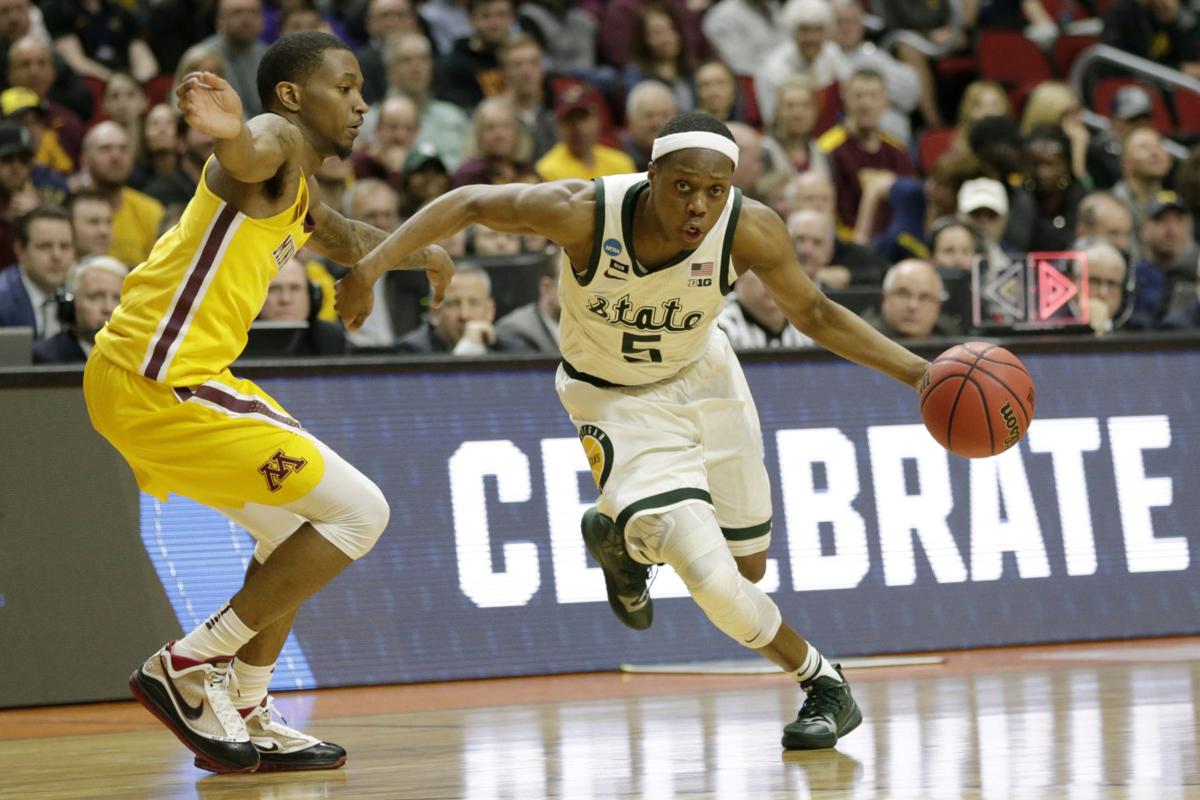 Cassius Winston, seen above during an NCAA tournament game last season, is the unanimous pick for Big Ten Preseason Player of the Year and his team was a near unanimous choice to win the Big Ten this season.

ROSEMONT, Ill. — Joe Wieskamp kind of figured he already was going to have a target on his back this season.

The former Muscatine High School star made the Big Ten’s all-freshman team in his debut season at Iowa last year and will take on a much larger role with the Hawkeyes this season.

But he figures the target may have grown a little in size Wednesday when he was named to the preseason All-Big Ten team.

"Obviously, maybe there’s some guys who may be upset that I’m on there and they’re not," Wieskamp said at the league’s preseason media day at the Rosemont Hilton. "It’s just motivation for me to prove that I’m worthy of that."

Winston was a unanimous choice as player of the year and Cowan and Wesson also were unanimous picks on the first team.

Wieskamp is coming off a season in which he was second in the Big Ten in 3-point percentage at 42.4 percent. He was the Hawkeyes’ third-leading scorer at 11.1 points per game and was second on the team in rebounding at 4.9 per game.

An unofficial media poll conducted by the Columbus Dispatch and The Athletic named Michigan State as the clear-cut favorite. The Spartans, who get star forward Joshua Langford back from injury in addition to the return of Winston and Tillman, were listed first on 27 of 28 ballots with Maryland getting the only other first-place vote.

"I have a team that I like but we still have a lot of question marks," Spartans coach Tom Izzo cautioned.

3-point change: A few of the coaches at the Wednesday morning news conferences were asked about the NCAA’s new 3-point distance, which has been moved back from 20 feet, 9 inches to 22 feet, 1¾ inches.

Most said they don’t really know what the impact of the change will be, but the consensus seems to be that it’s not going to be a big deal.

"We don't know what it's going to look like in the short run, but we might see more pack-line and more zone defense as a result," Iowa coach Fran McCaffery said.

McCaffery said he does expect there to be a few less 3-point attempts now.

Purdue coach Matt Painter said the impact will vary from team to team.

Small world: Many of the coaches thanked Big Ten commissioner Jim Delany and congratulated him on his impending retirement.

Northwestern coach Chris Collins was one of the few who also mentioned Kevin Warren, who has begun working with Delany and will take over as his replacement on Jan. 1.

"It's just funny how life is full circle," Collins said. "When I was a little kid growing up outside of Philadelphia, my father was the volunteer coach at the University of Pennsylvania, and the backcourt was Fran McCaffery and Kevin Warren. I was the ball boy. It's funny to see how things turn out later in life."

McCaffery applauded Warren’s appointment, calling him one of the most confident, consistent people he’s ever known.

"I’m just thrilled that he’s going to be our conference commissioner," he added.

Cornhusker mania: Former Iowa State coach Fred Hoiberg has been amazed at the enthusiasm and support he has found in his new role as the head coach at Nebraska.

The Cornhuskers already have sold out Pinnacle Bank Arena for the entire season and Hoiberg said there wasn’t an empty seat at the team’s opening night practice last week.

Of course, there was an added attraction at opening night as hip hop artist Rick Ross performed at the event. Hoiberg appeared to be kidding when he indicated he was a big fan of Ross.

"I have a pacemaker," he said. "It was so loud I thought my pacemaker was going to explode."

Sartorial splendor: It has become customary for Big Ten coaches to comment on the attire of moderator Satvik Patel as each takes their turn speaking at media day, but only one did so Wednesday.

"Our players would say you’ve got some real drip to your game," Holtmann said.

Big legs have decided big wins for Iowa against Michigan.

Iowa's Joe Wieskamp (10) grabs a rebound during a second round NCAA tournament game in Columbus, Ohio, last year. Wieskamp was one of 10 players named to the All-Big Ten preseason team Wednesday.

Cassius Winston, seen above during an NCAA tournament game last season, is the unanimous pick for Big Ten Preseason Player of the Year and his team was a near unanimous choice to win the Big Ten this season.